Bill Hayes always hated homecoming when he was coaching at Winston-Salem State and N.C. A&T. Too many distractions on those weekends could lead his teams down the wrong path.

Hayes finally found a homecoming he could embrace as he watched his football life flash before his eyes on Saturday night at Maple Chase Golf & Country Club in Winston-Salem.

Hayes, 77, was brought to tears a few times as around 20 of his best former players from each school gathered for a dinner to honor a man who shaped their lives. The dinner was the brainstorm of A&T’s Maseo Bolin and WSSU’s Robert Weeks at Hayes’ home club, where he has a single-digit golf handicap and plays four or five times a week.

“Let’s honor the man now when he’s above ground and he can appreciate it,” Weeks said. “And I think he is having a great time.”

Hayes, nicknamed “Wild Bill,” was as old-school as they come, demanding more from his players than they ever expected. But he also cared for them, made sure they were doing the right things off the field, and he’s never lost touch with them after they were done playing for him.

“Homecoming games distracted us from winning but this night is different,” Hayes said. “This is a homecoming and my Super Bowl all wrapped into one, and I thank you all.”

Many of the players who were invited to the touching tribute played in the NFL or had big impacts on both programs he turned around. Hayes would have loved to have every one of his players he coached in one place but that wasn’t possible.

“I’m so proud of you guys for what you became after football,” Hayes said through tears. “You’ve done more for me than I’ve done for you.”

From 1974 through 2002 he coached at both HBCUs in the Triad and compiled a 195-104-2 record with two black college national championships, three CIAA titles, three MEAC championships and countless memories.

Besides his impact at WSSU and N.C. A&T, he did the same for three years as the first Black assistant coach in the ACC at Wake Forest under Chuck Mills from 1973 to ‘75.

“Without Bill Hayes I’m not sure where I’d be,” said Larry Tearry, the first Black center in ACC football and a Fayetteville native. “Bill actually saw me play basketball when he was visiting my high school (E.E. Smith) but he liked the way I moved on the court. I just played one year of football in high school, and never met Coach Mills until I got to campus.”

After Hayes convinced him to move from tackle to center, Tearry became a fourth-round draft pick of the New Orleans Saints and played two years in the NFL.

Each player Saturday night wore their school’s hall of fame jackets, and they stood to tell stories of what “their coach” meant to them.

“You saved my life,” said Rudy Artis, an A&T wide receiver who played in the early 1990s and was also a baseball standout. “I needed you in my life, and I’m so thankful.”

Hayes coached at North Forsyth before taking the job at Wake Forest as an assistant. But he eventually went across town to WSSU in 1976 and began to have a bigger impact on players through hard work and dogged recruiting.

“He would come into our houses and he’d say ‘you are better than you think you are and I’m going to prove it,’” said Timmy Newsome, a star on those WSSU teams who played for the Dallas Cowboys and owns his own software company in Dallas.

WSSU’s Donald Evans, Donald Franks and Anthony Blaylock are just a few of the players Hayes sent to the NFL. For the Aggies, Jamain Stephens, Curtis Deloatch, Maurice Hicks and several others also reached the highest level.

Deloatch was a walk-on at A&T, but wound up playing in the NFL because Hayes believed in him. He played on Hayes’ final team at A&T in 2002.

“He had an impact on me that was unbelievable,” Deloatch said. “Back then nobody was giving me a chance but he taught me so much and because of him I played in the NFL. More than that, he taught me things that I pass on to my own kids today.”

As one player said: “I didn’t get to the NFL, but I’ve made NFL money and I owe that to Coach Hayes.”

Darryl Klugh, a star on the Aggies’ 1999 MEAC championship team, earned two engineering degrees from A&T and is the founder and former owner of Axis of Engineering. He has already sold one company.

“He’s an amazing man,” Klugh said about Hayes, who is in seven halls of fames and is recognized as one of the top football coaches in two HBCU conferences.

Hayes’ former players came from as far away as California, Massachusetts, Texas and Florida. He also made sure to thank his wife of 53 years, Carolyn.

“When I was invited to this dinner, there was no way I was going to miss it,” said Blaylock who played six years in the NFL for three teams. “I played for a lot of coaches in the NFL like Bud Carson, Bill Belichick and Nick Saban, but Coach Hayes is the best coach I’ve ever played for.”

Another facet of Hayes’ reach is that several former players got into either high school or college coaching or coaching in the NFL. Brad Holmes, a former A&T football player, is now the general manager of the Detroit Lions.

Connell Maynor, who played for Hayes at WSSU and then at A&T, is coming off a SWAC championship this spring as Alabama A&M’s head coach.

“I see Coach Hayes all the time because I’m here a lot (in the Triad) and he knows I love him,” said Maynor, who was hired by Hayes at WSSU when Hayes was the athletics director in 2010 and guided the Rams to the Division II national championship game in 2012. “But he’s emotional now seeing all you guys come to honor him. This is long overdue because all of us in this room know what this man means to us.”

At least for a little while, the WSSU-A&T rivalry was put aside Saturday night.

But Broderick Graves, a star running back for the Rams in the late 1980s, couldn’t resist giving Maynor some grief.

“The real reason Connell transferred to A&T (in 1988 when Hayes went to A&T) was he was tired of handing off to me,” Graves joked.

Richard Hayes, Bill’s nephew and his former player at A&T, is the head coach at Fayetteville State.

“I grew up with these guys like Anthony Blaylock when he was at Winston and I’d run around trying to be like him as a defensive back,” Richard Hayes said. “I’ve tried to take what Bill’s done and carried it on, but those are big shoes to fill. I’m just glad they put this together for him.”

A documentary could be coming

Bolin, a former Aggies quarterback, is hoping that a documentary can be put together of Hayes’ life because of its scope. Hayes was an All-American at N.C. Central; coached in high school; then coached in college; and he reinvented himself as an athletics director at N.C. Central, Florida A&M and WSSU.

“A camera crew is here because we want this documentary to focus on Bill as the championship coach, and his HBCU experience through the eyes of an icon,” Bolin said. “And we want to highlight the success the players have had off the field after football was over.”

Hayes’ players presented a gift carved out of wood that detailed his career. The piece was centered around helmets of each school.

James White, a running back at A&T, talked glowingly about the impact Hayes had on so many.

“You have bettered all of our lives,” White said as Hayes once again had to wipe tears out of his eyes. 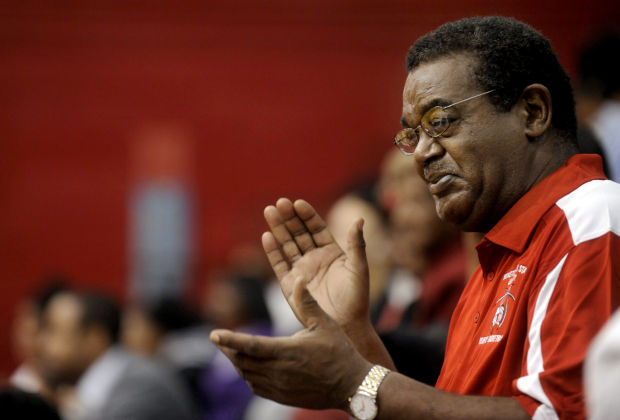 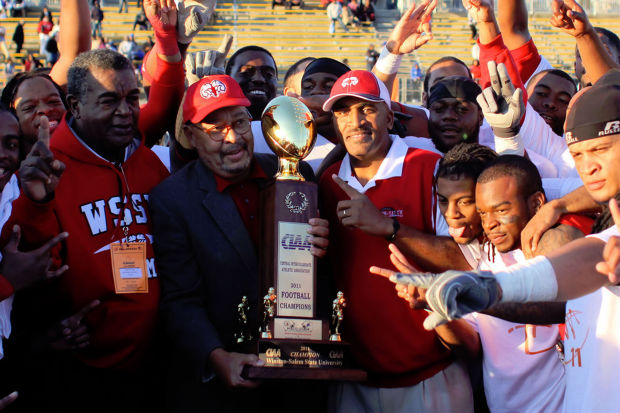 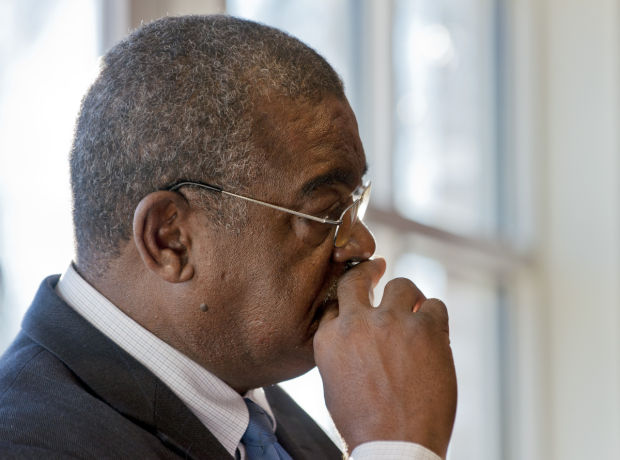 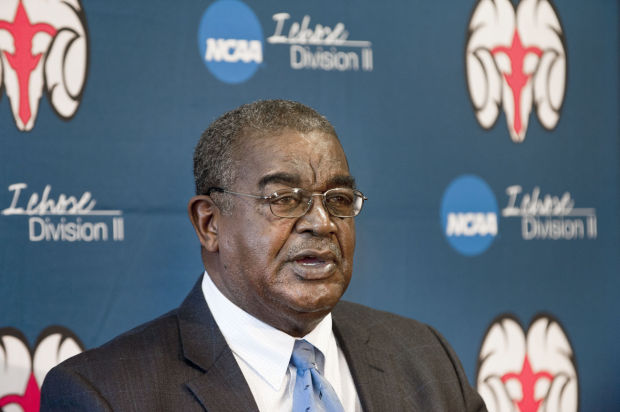 Since Bill Hayes took over as athletics director at Winston-Salem State in 2009, the school has won 18 CIAA titles. 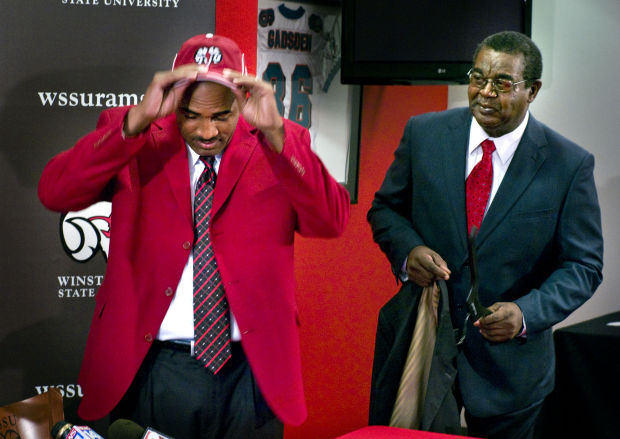 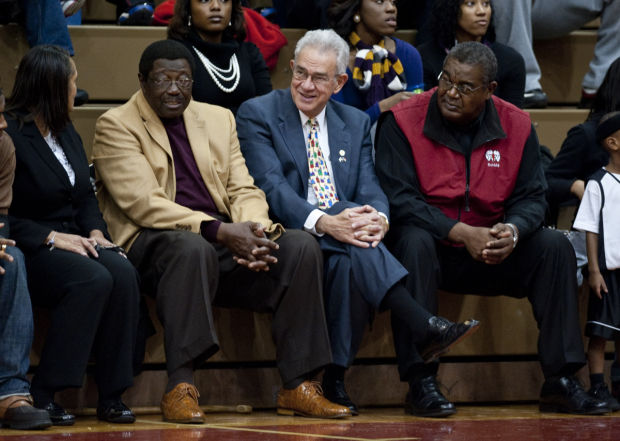 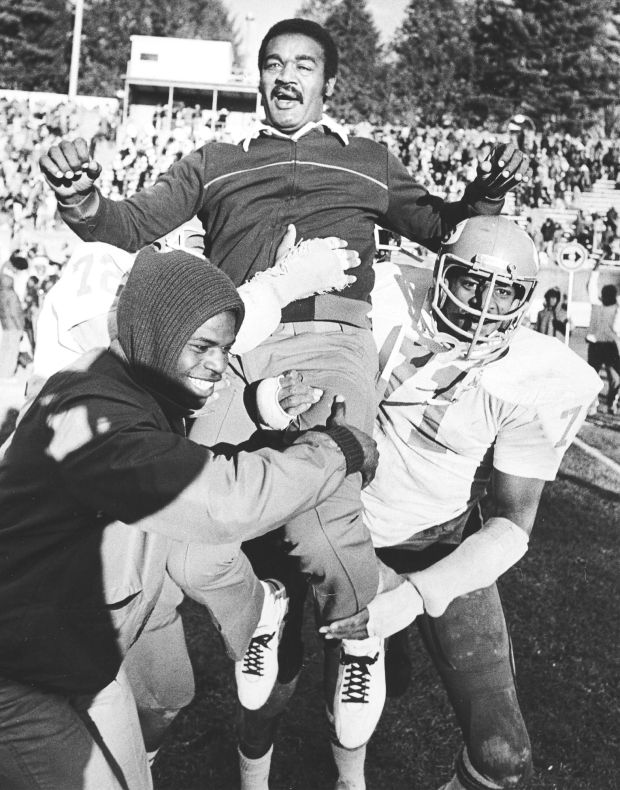 WSSU coach Bill Hayes was carried off the field by his players after they finished the 1977 regular season 11-0. 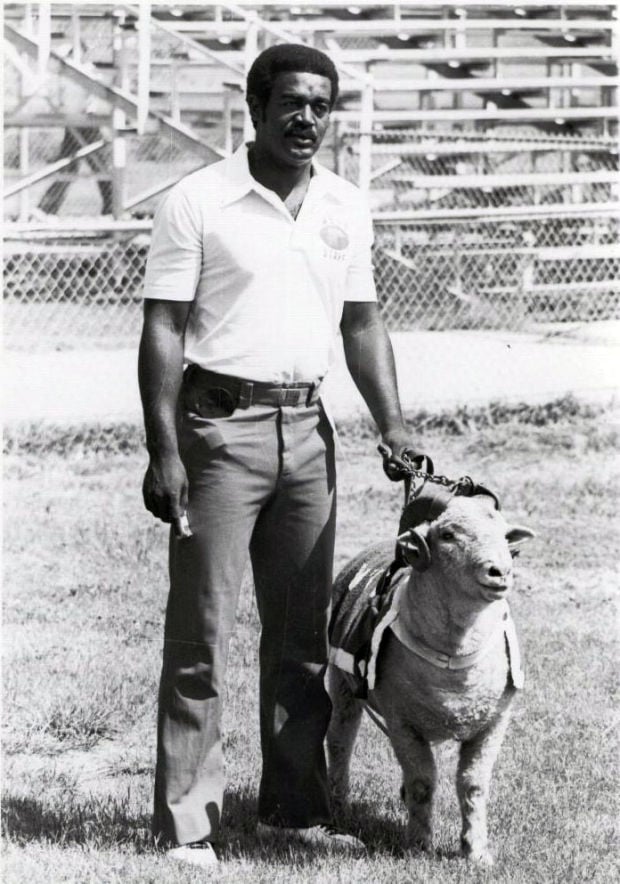 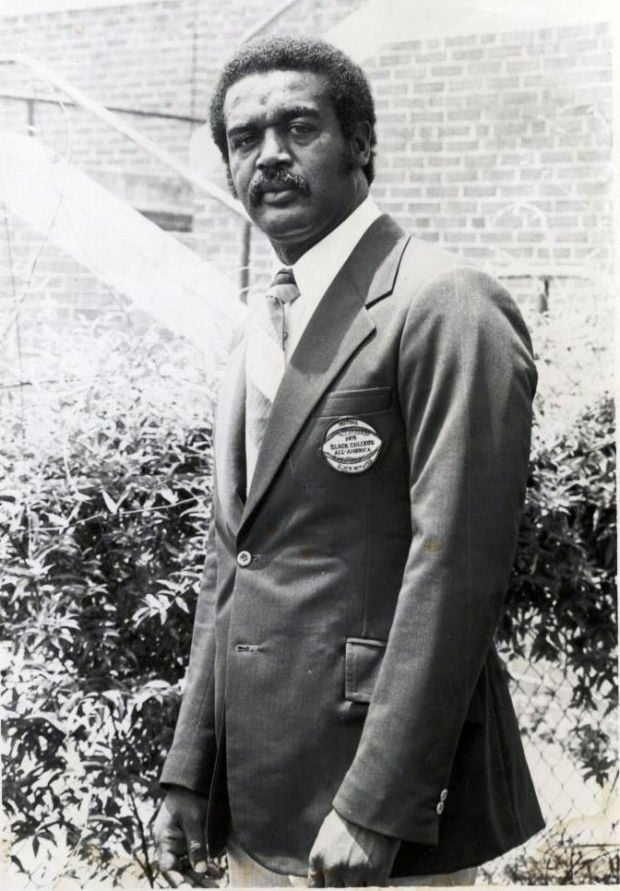 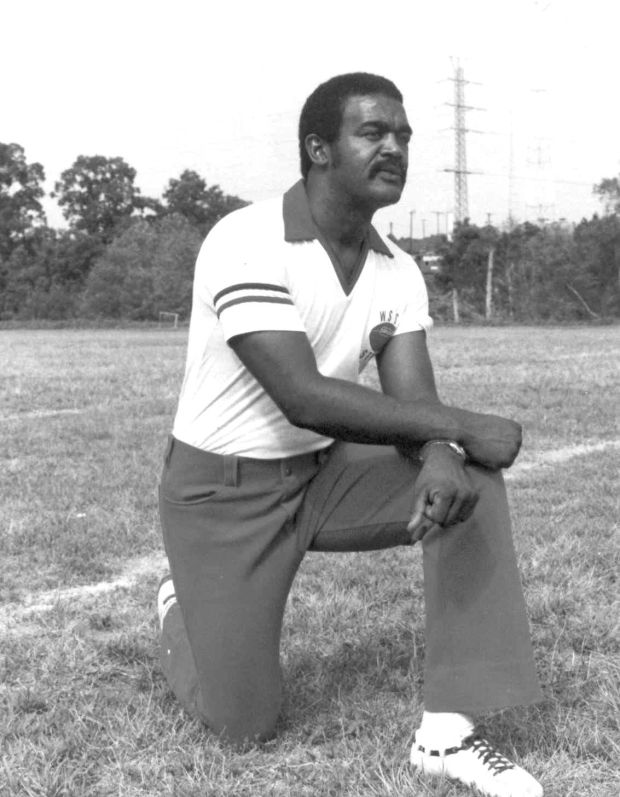 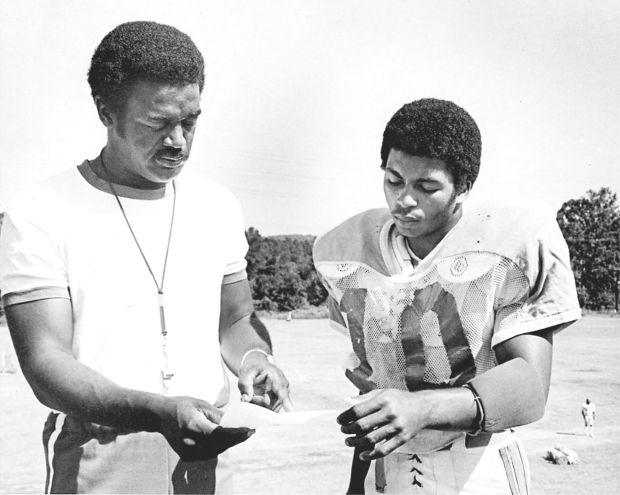 Since Bill Hayes took over as athletics director at Winston-Salem State in 2009, the school has won 18 CIAA titles.

WSSU coach Bill Hayes was carried off the field by his players after they finished the 1977 regular season 11-0. 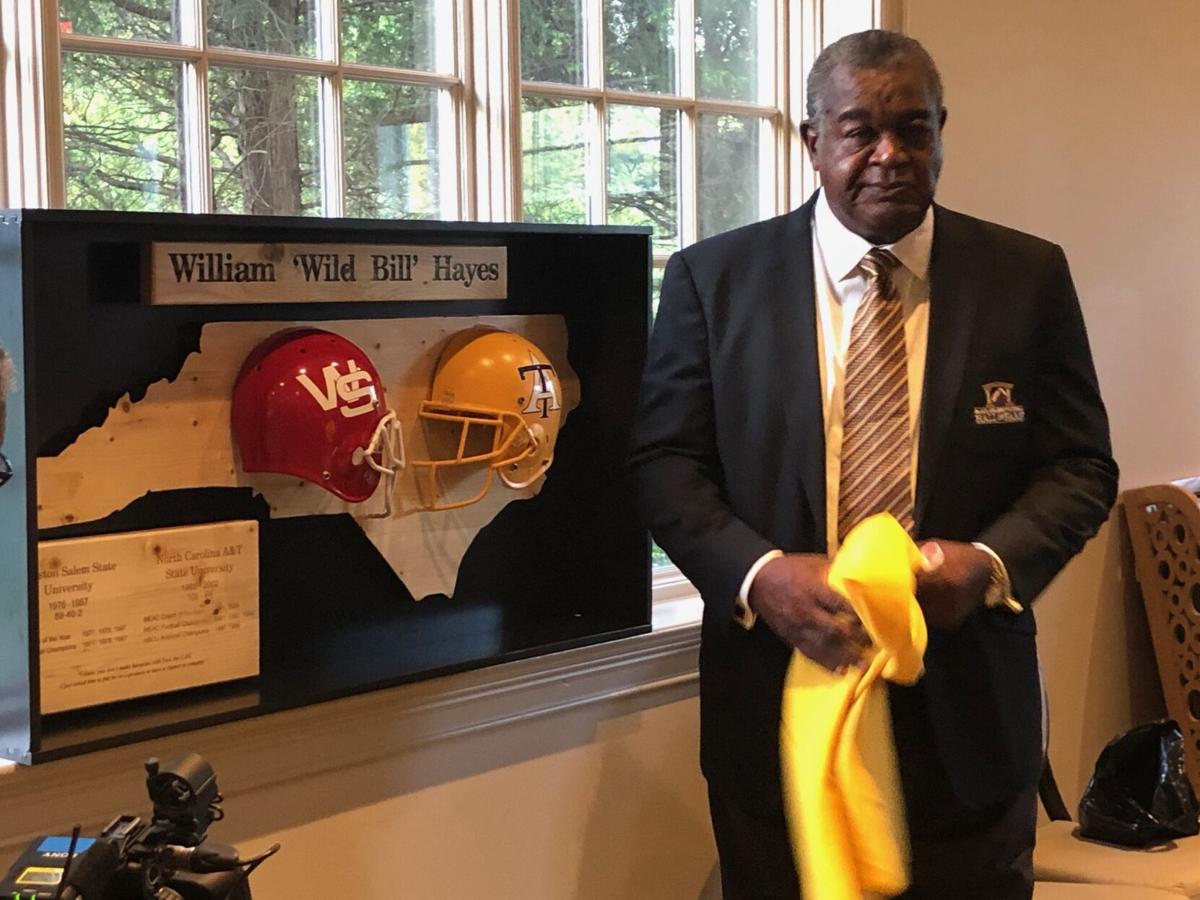 Bill Hayes received a gift from players who gathered to honor him on Saturday night, detailing his accomplishments at both Winston-Salem State and N.C. A&T. 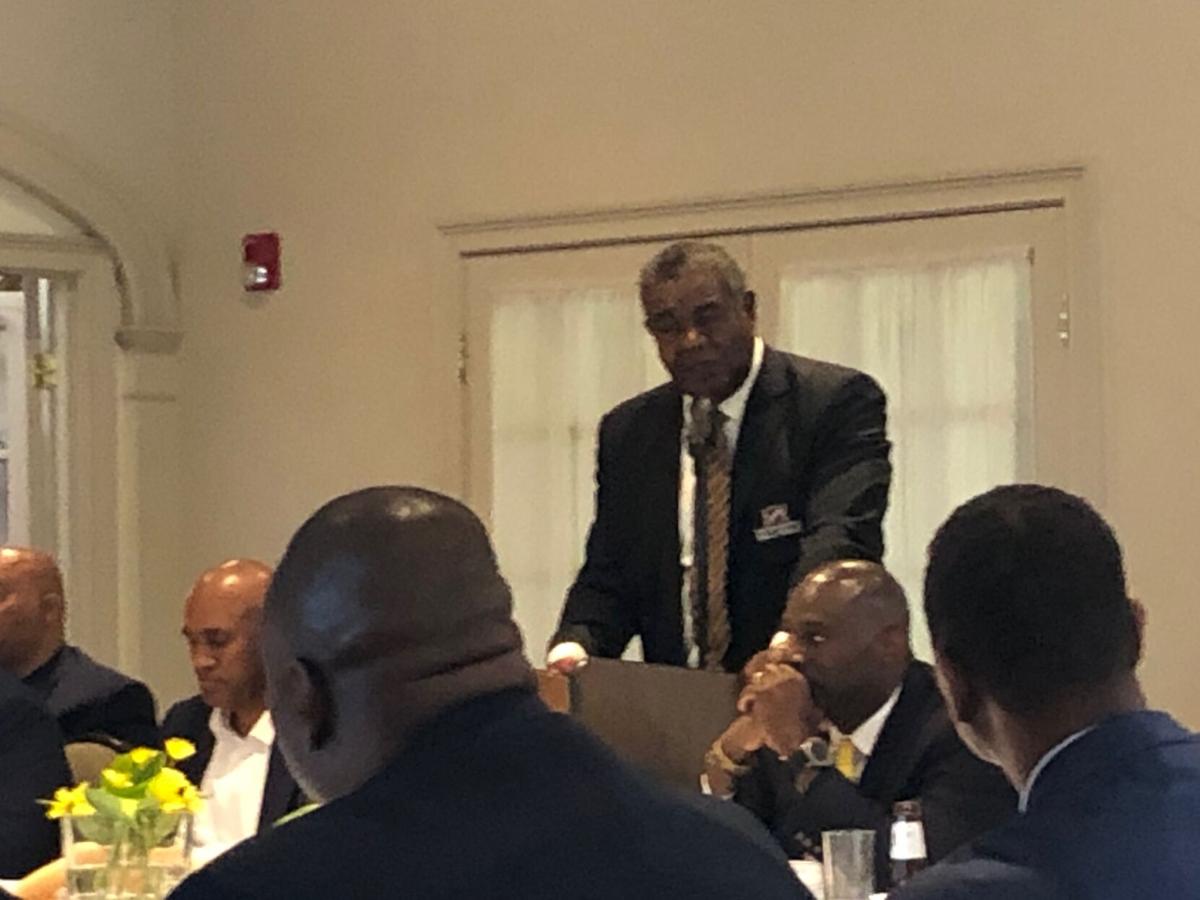 Bill Hayes called it a special night as former players from N.C. A&T and WSSU honored him with a dinner at Maple Chase Golf & Country Club. 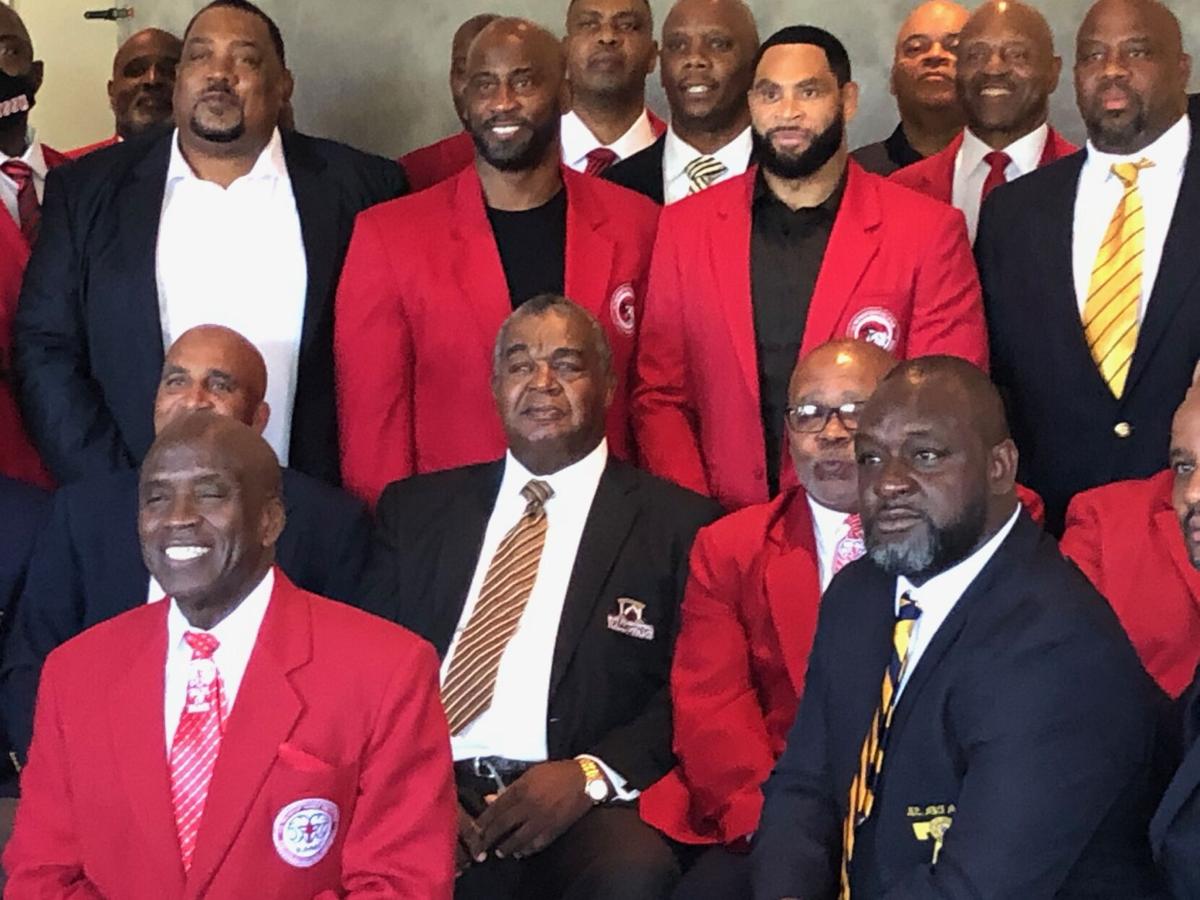 Several of Bill Hayes’ players at N.C. A&T and WSSU gathering for a picture before the dinner at Maple Chase on Saturday night. 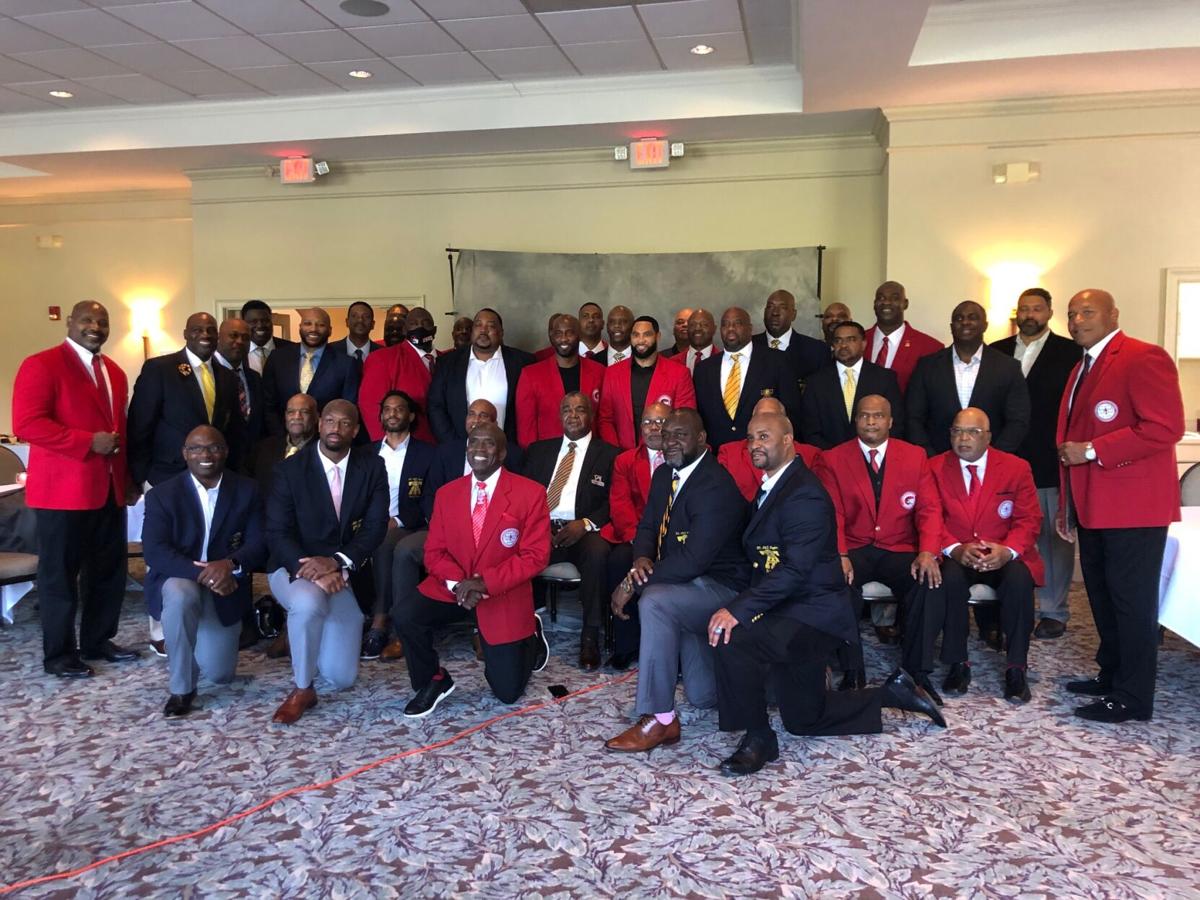 During his career at WSSU and N.C. A&T with a combined 23 seasons Bill Hayes won 195 games and five conference titles. 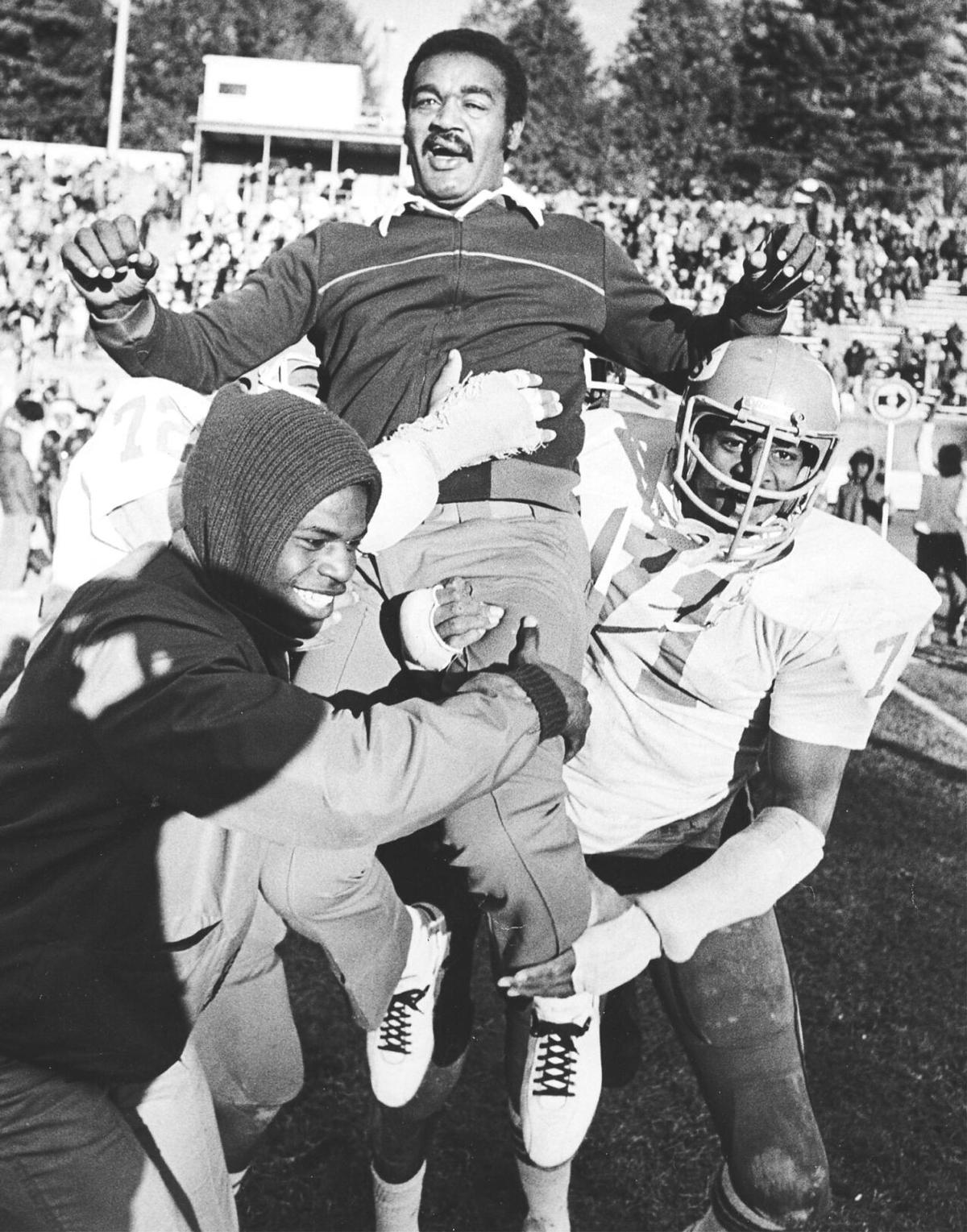 Bill Hayes getting a ride off the field after Winston-Salem State completed an 11-0 regular season in 1977. 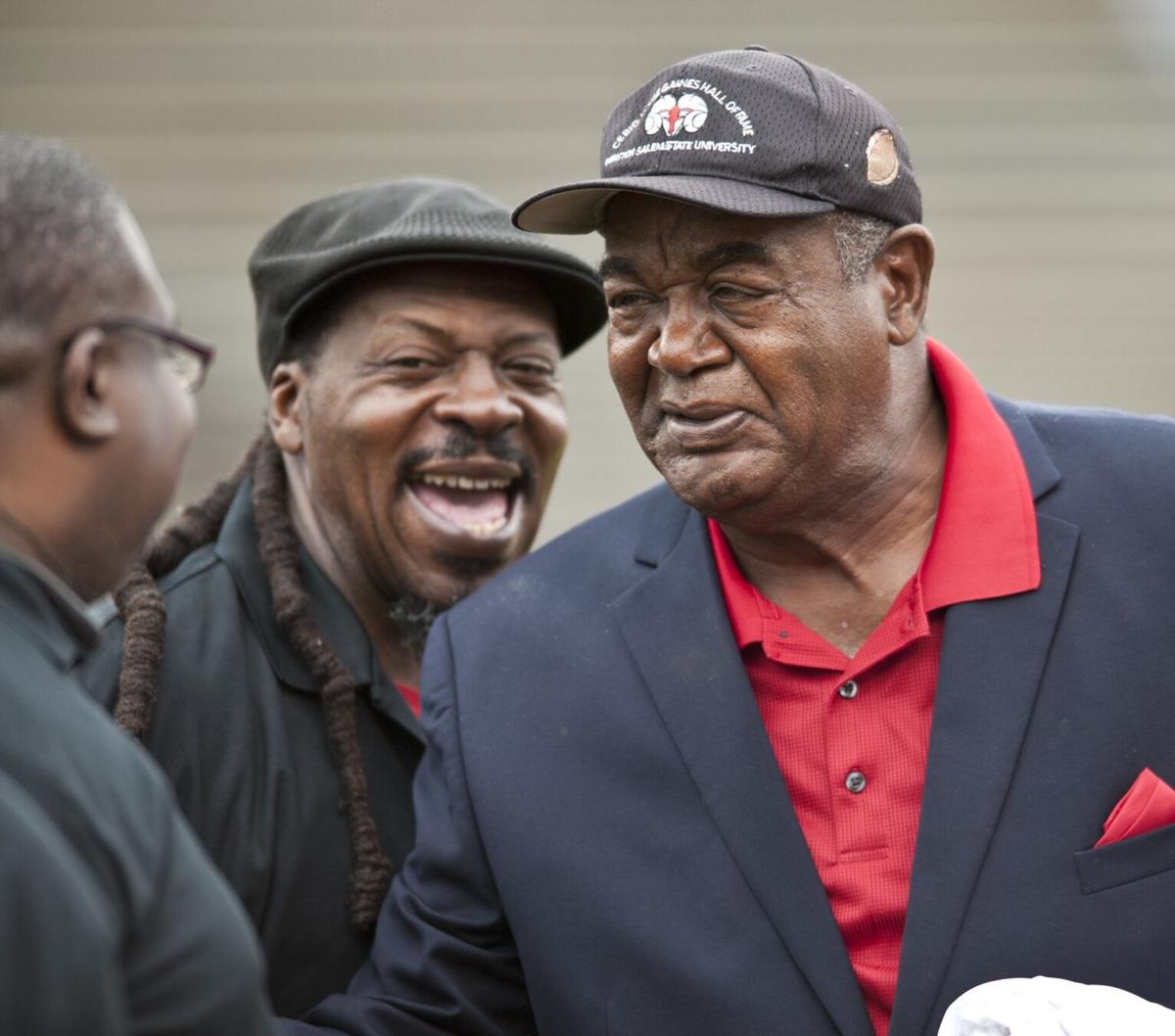 Former Winston-Salem State football coach and athletics director Bill Hayes greets members of the 1977 and 1987 football teams that were honored at halftime of the Rams game against Johnson C. Smith in October of 2017.