Winston-Salem State was back in the building.

The defending CIAA champion finally got back into the Gaines Center on Friday night in its home opener — and the mood was festive.

The Rams (3-1) didn’t have all their weapons, but still had enough to beat Carolina University 63-47. The Bruins (5-3) are an NAIA program about a mile from WSSU’s campus.

The WSSU students started lining up at 3 p.m. for the 7 p.m. game. By the time April Reid, the facilities director of the renovated Gaines Center, opened the doors at 6 p.m., the students had no trouble filing in to sit in the new bleachers. The bleachers made the place smell brand new.

And the Red Sea of Sound, the award-winning band, brought the heat as usual. Friday’s game was a hot ticket, as students were turned away just before game time because the place was full.

“I can’t wait to see the game and that’s why I was first in line,” said senior Alexandria Taylor-Stele, who’s from Atlanta. “This atmosphere can’t be beat and we’ve been away for a long time.”

Taylor-Stele was the first student into the gym and she sat in the second row, right at midcourt.

It’s been 22 months since the Rams played a home game — at the tail end of the 2019-20 season. The Rams won the CIAA Tournament on Feb. 29, 2020, in Charlotte and were in front of their home fans for the first time since.

“I just told them to be ready,” said senior guard Jon Hicklin before the game.

Hicklin is one of just four players back from the championship team and he didn’t pull any punches as to what he expected. “It’s going to be off the hook,” he said with a smile.

Also arriving early was WSSU chancellor Elwood Robinson; he didn’t mince words when asked about seeing students back in the building.

“We’re back,” Robinson said in his best impersonation of Cam Newton, Carolina Panthers quarterback who returned to the team eight days ago.

One of the first fans from the community through the doors was longtime fan Ernestine Crawford. She said she’s been a die-hard WSSU fan for nearly 30 years.

Dressed in a Rams’ hat, jacket and face mask, Crawford said she’s glad basketball is back.

When the doors finally opened, there were at least 1,000 students waiting at both entrances.

And the Rams didn’t disappoint the crowd of about 2,000.

Despite playing without two of his top guards — sophomores Isaac Parson and Samage Teel — Coach Cleo Hill Jr.’s deep team didn’t miss a beat. This is Hill’s third season as the Rams’ coach and he said he loves the atmosphere the Gaines Center creates.

When the Rams were preparing to play Duke in an exhibition game earlier this season, Hill said: “Duke has the best fan experience for Division I and we feel like we have the best fans in Division II; our students and our fans have always been tremendous.”

Hill said after the game that Parson and Teel, who weren’t on the bench, were out because they were both banged up.

“They should be good to go, but they are injured and banged up,” Hill said.

Javonte Cooke, a senior transfer from Mars Hill and one of the 11 newcomers on Hill’s roster, said playing in the Gaines Center for the first time was a lot of fun.

“It was everything that I thought it would be and it was loud,” said Cooke, who finished with 14 points. “Once we got going and I got used to things, it went a lot better for us.”

They will hit the road next week and play in the Chris Paul HBCU tournament in Connecticut.

“We’re happy about going to play in the Chris Paul Tournament and we are expecting a good trip. It will be another good experience for our guys,” Hill said.

WSSU beats St. Aug's in an empty gym that looks nothing like the usual CIAA basketball experience

Ram Ramblings: CIAA pushes ticket sales for tournament in Baltimore despite the pandemic getting in the way

The tournament will begin in 31 days and the only requirement for fans, according to conference officials, will be masks

Only about 100 fans are there as Rams, with five players out as well as Coach Cleo Hill Jr., win in overtime. 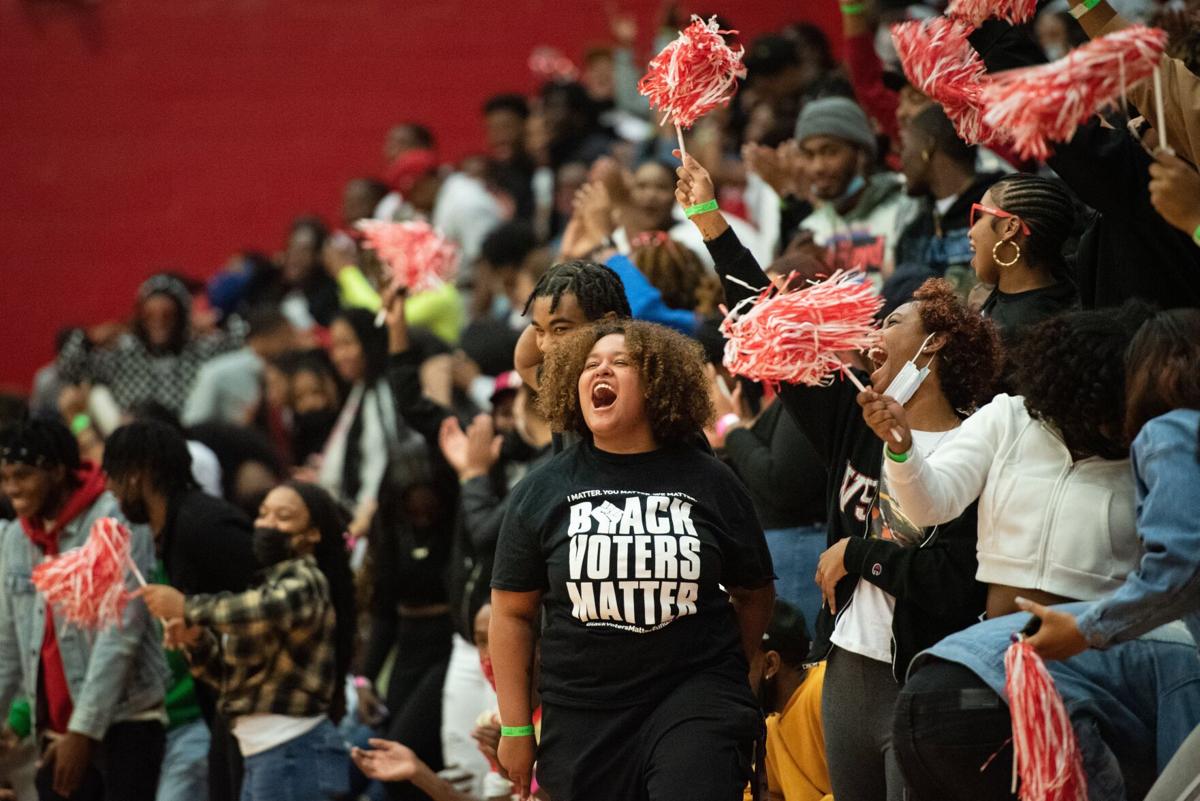 Winston-Salem State fans cheer during the first half of Friday’s game against Carolina University in the first game at the Gaines Center in 22 months. 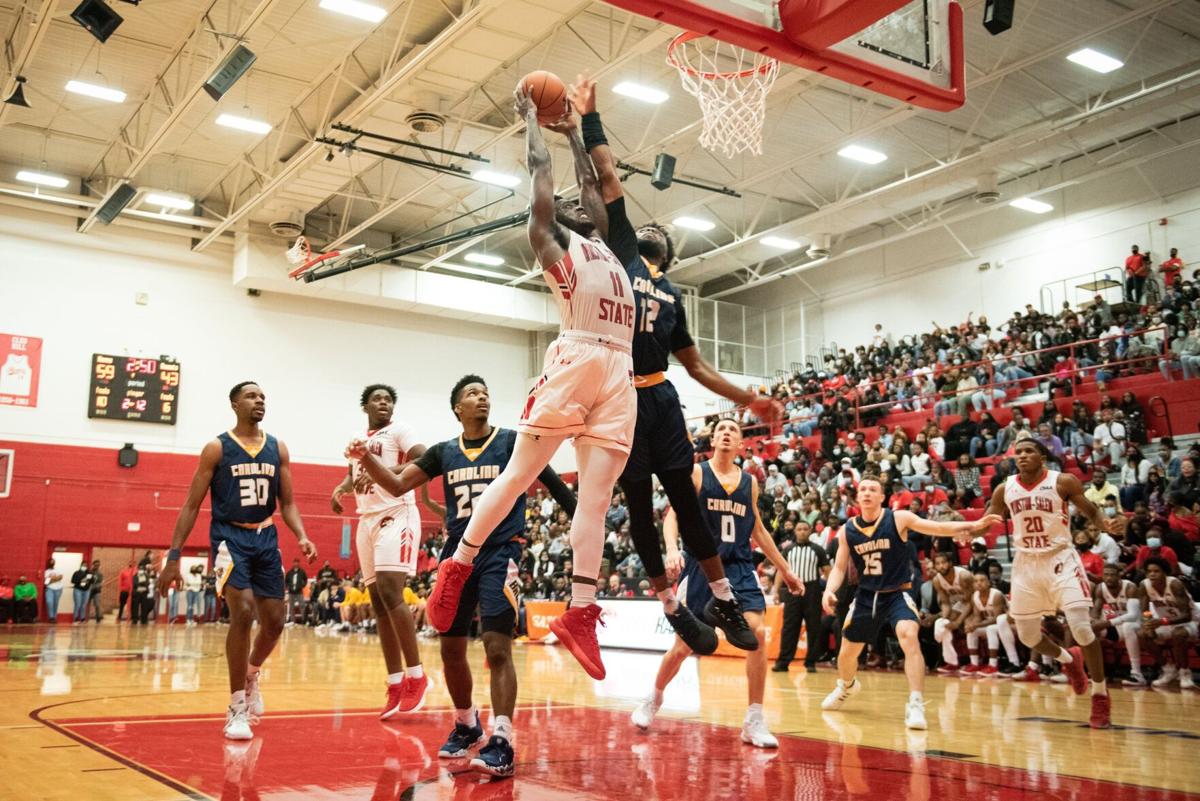 Winston-Salem State guard Jonathan Hicklin (left) is fouled by Carolina University forward Kester Ofoegbu in the second half of Friday’s game at the Gaines Center. 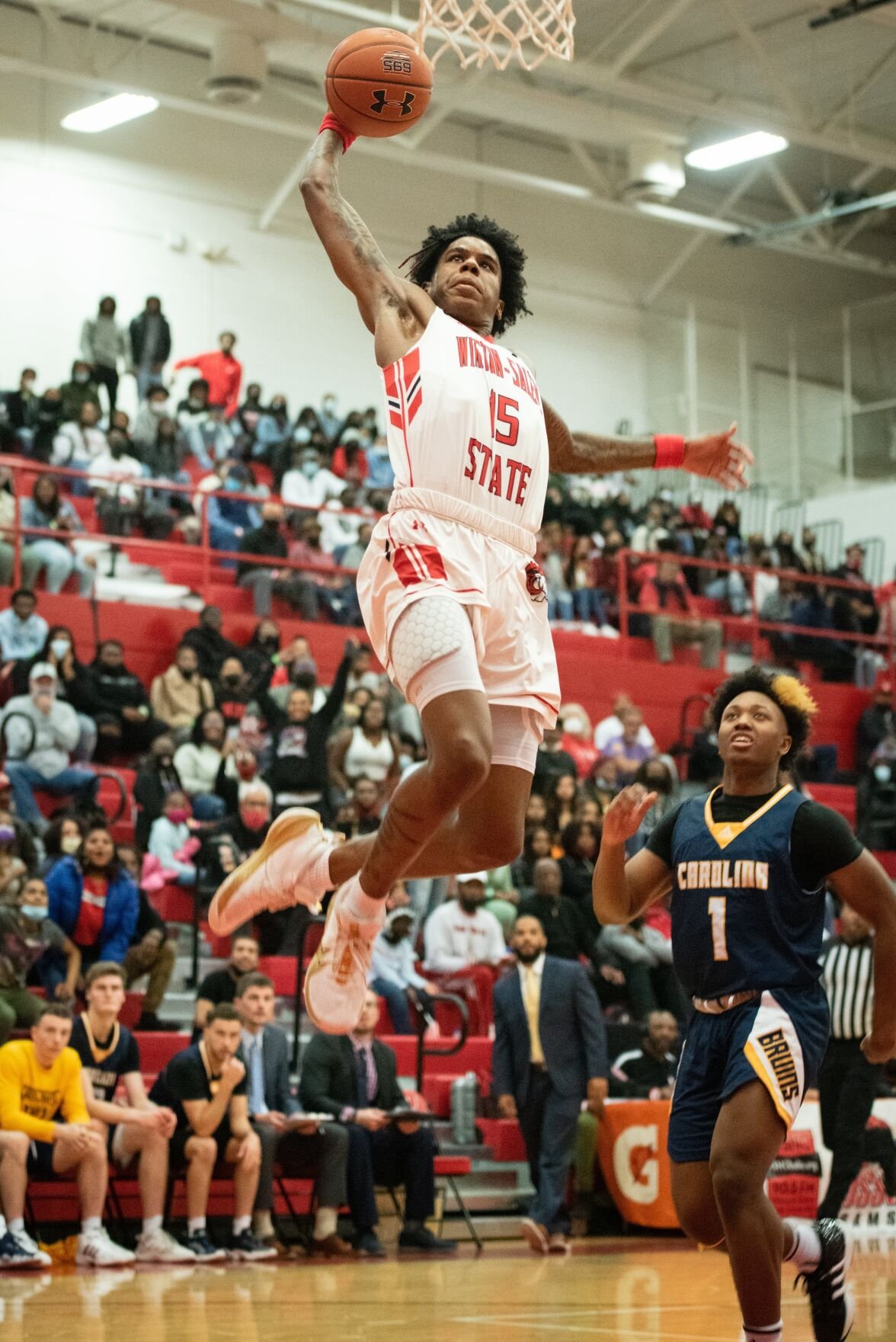 Winston-Salem State guard Javonte Cooke dunks in the first half of a men’s basketball game against Carolina University on Friday, Nov. 19, 2021, at the Gaines Center in Winston-Salem, N.C. The WSSU Rams defeated the Carolina Bruins, 63-47. (Allison Lee Isley, Journal) 112021-wsj-spt-wssubkb