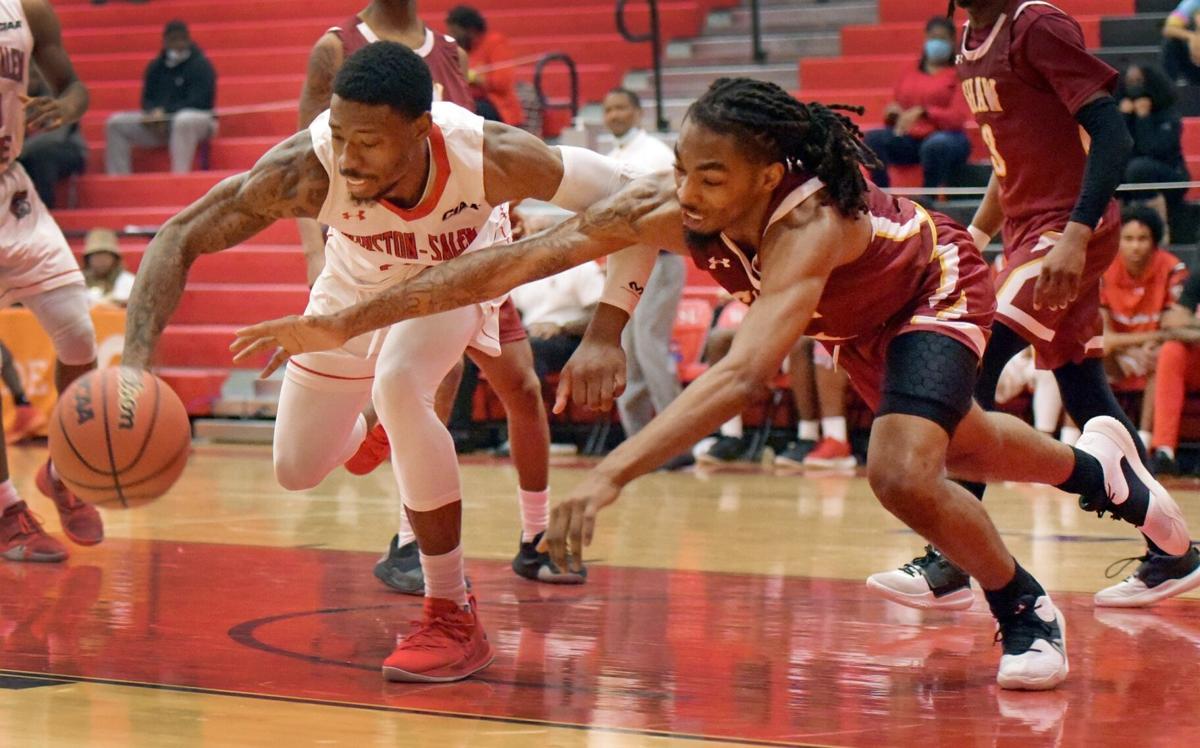 Winston-Salem State’s Cameron Campbell (left) and Shaw’s Denari Garrett battle for a loose ball in the Rams’ 81-66 win on Saturday at the Gaines Center. 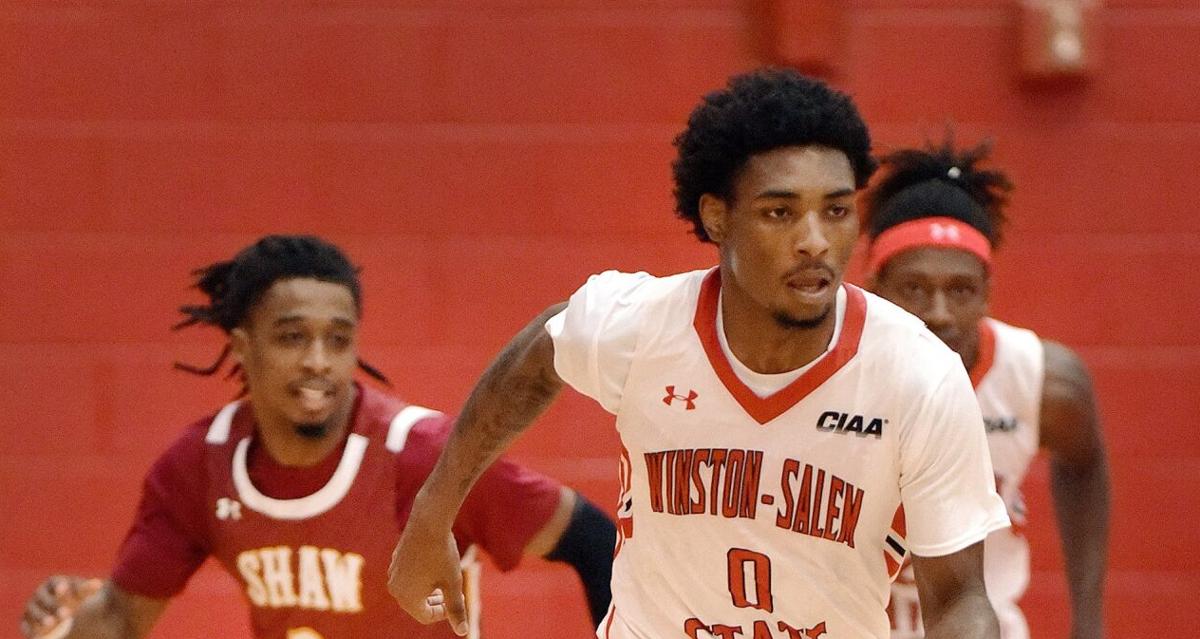 Winston-Salem State’s Samage Teel has been getting better and better with each game. 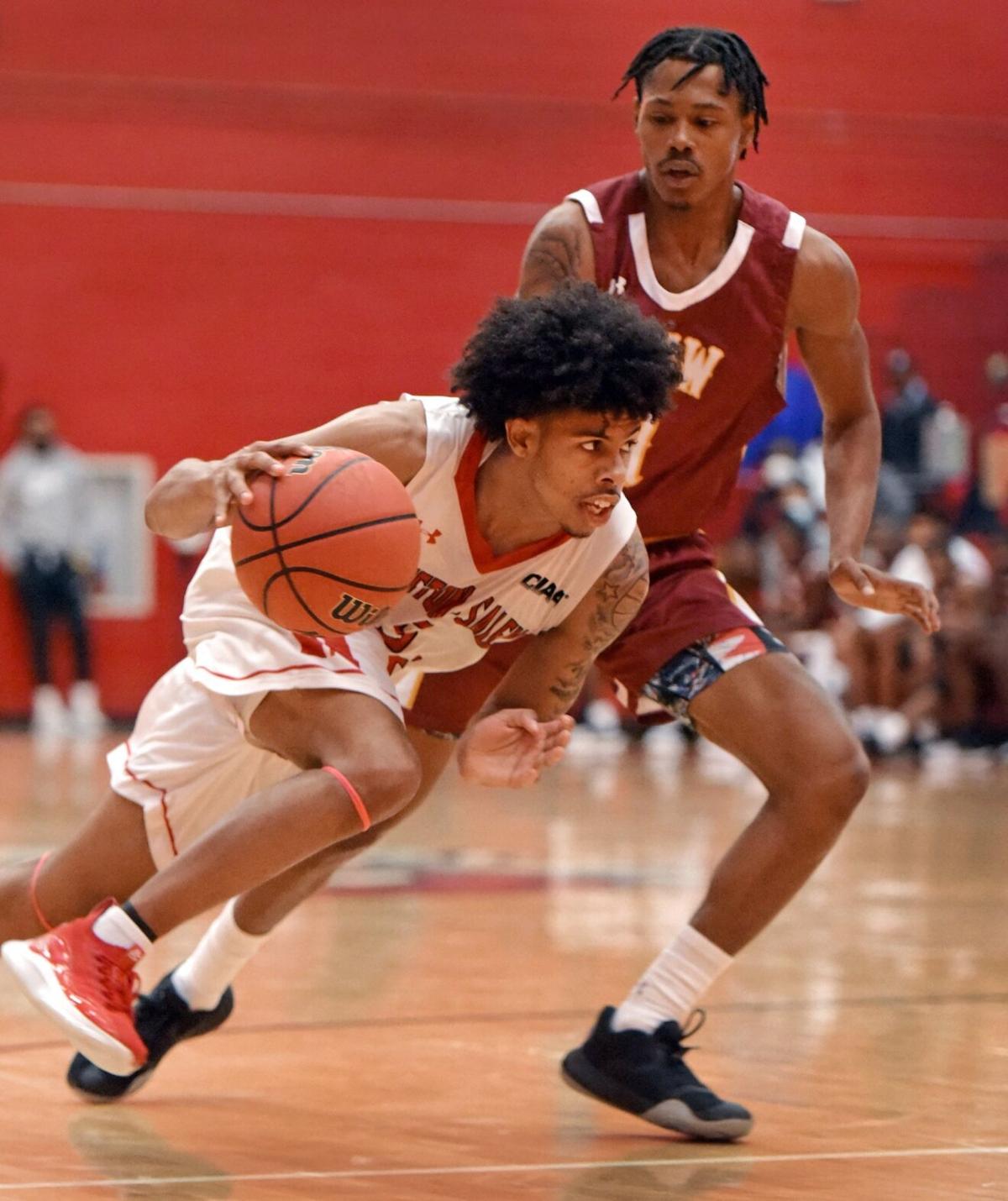 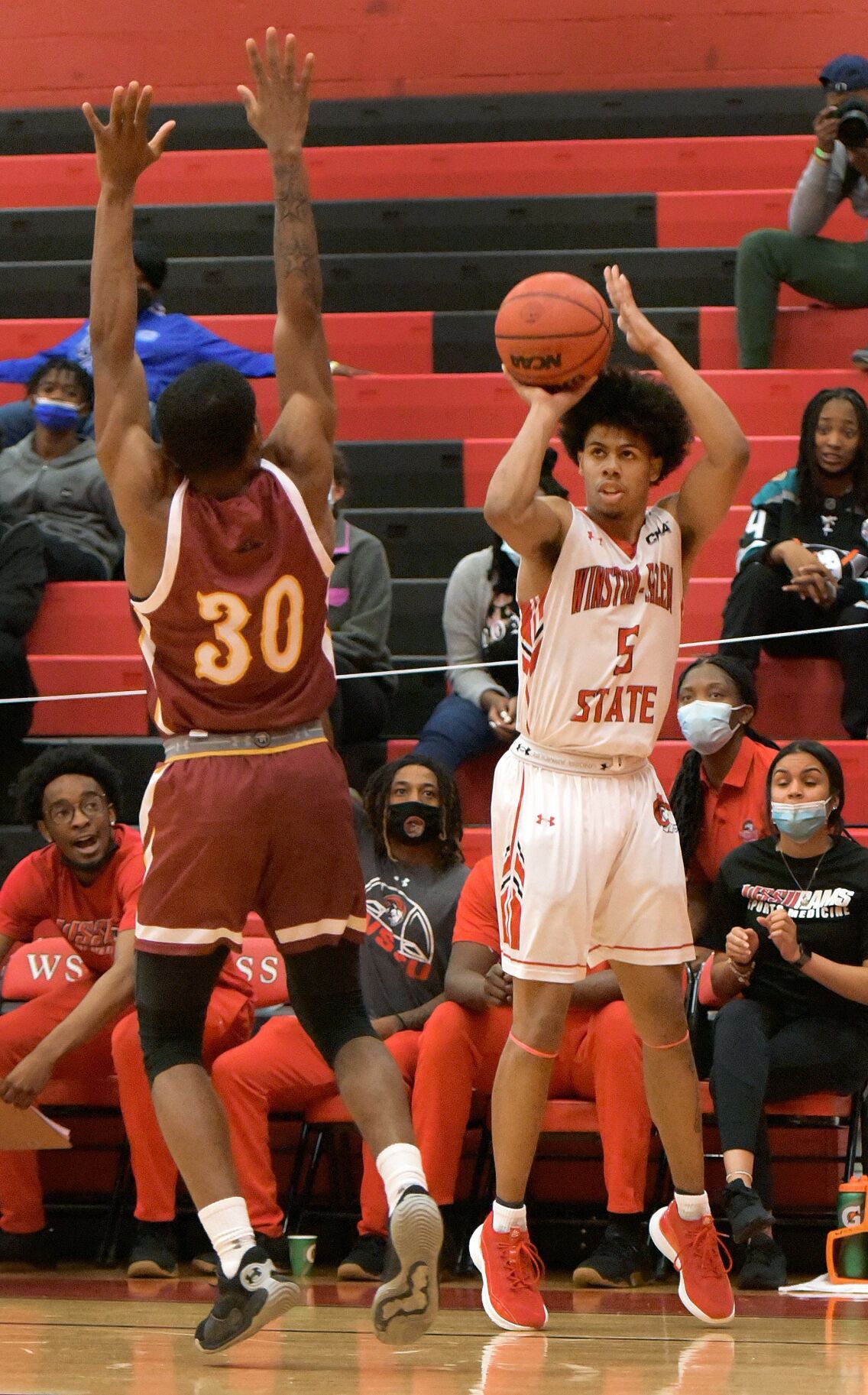 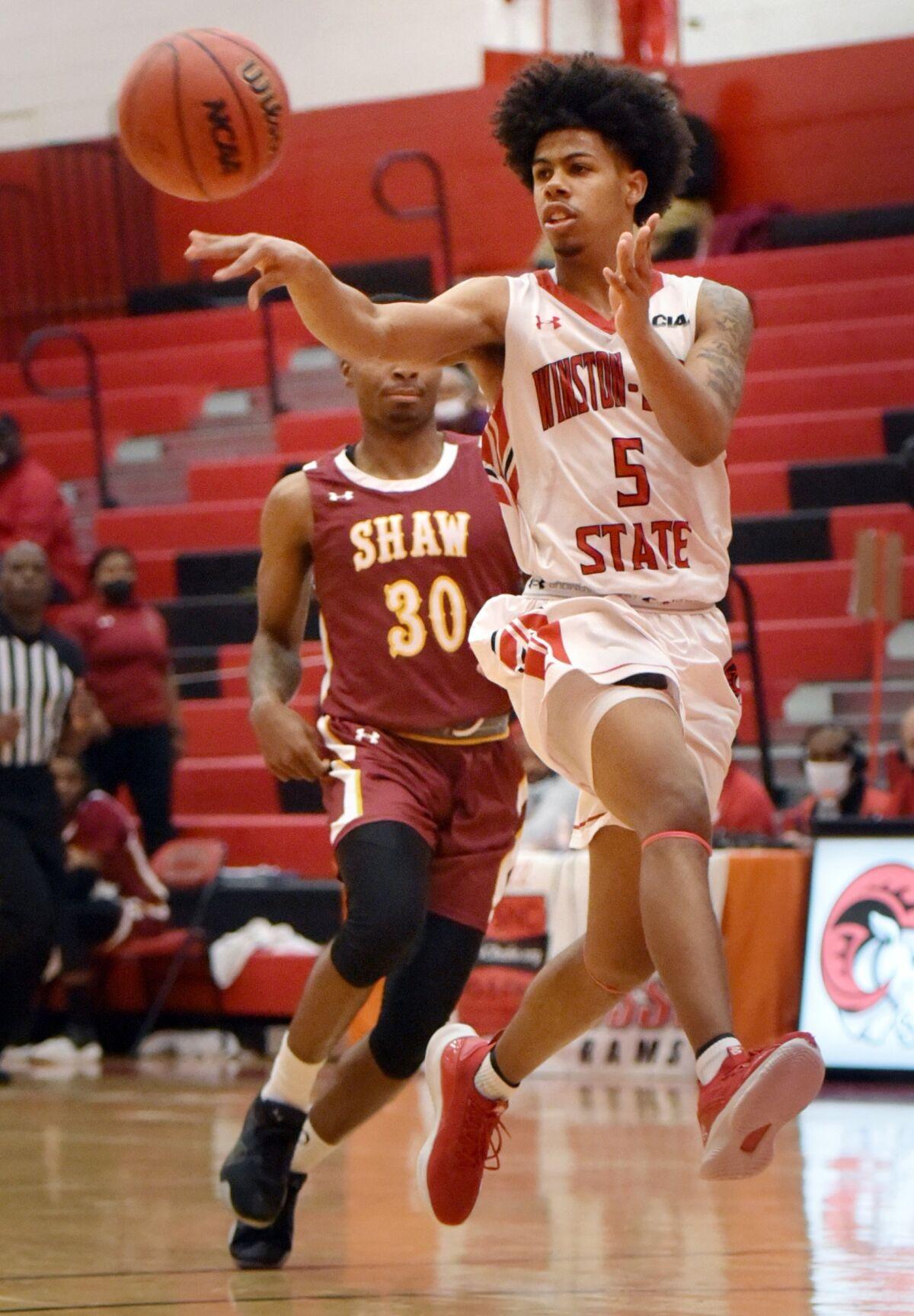 Winston-Salem State's Isaac Parson passes to the wing as he leads the Rams in transition in the Rams' 81-66 win over Shaw. 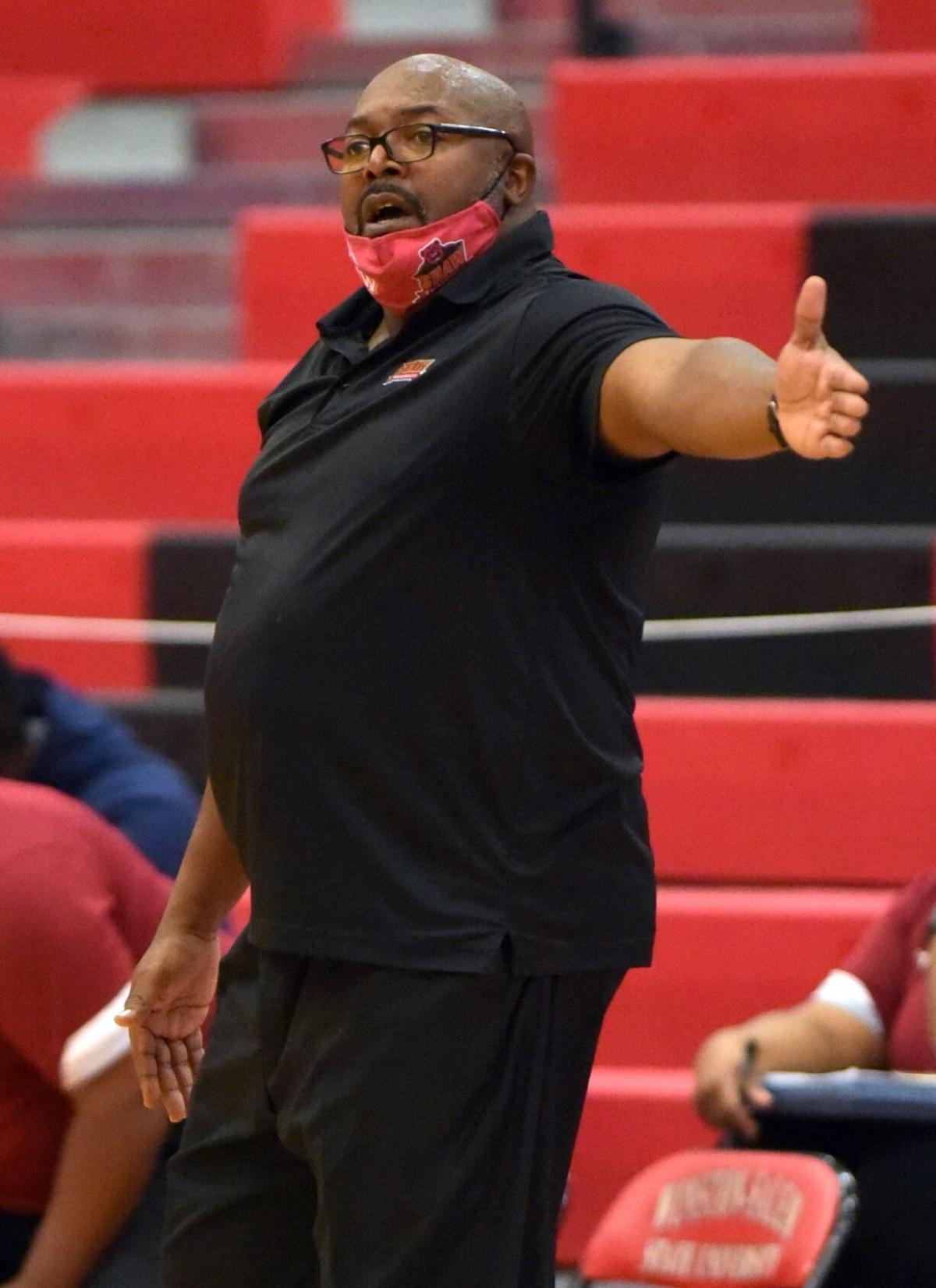 Shaw head coach Bobby Collins, formerly the head coach at Winston-Salem State, directs the Bears in their 81-66 loss to the Rams on Saturday at the Gaines Center. 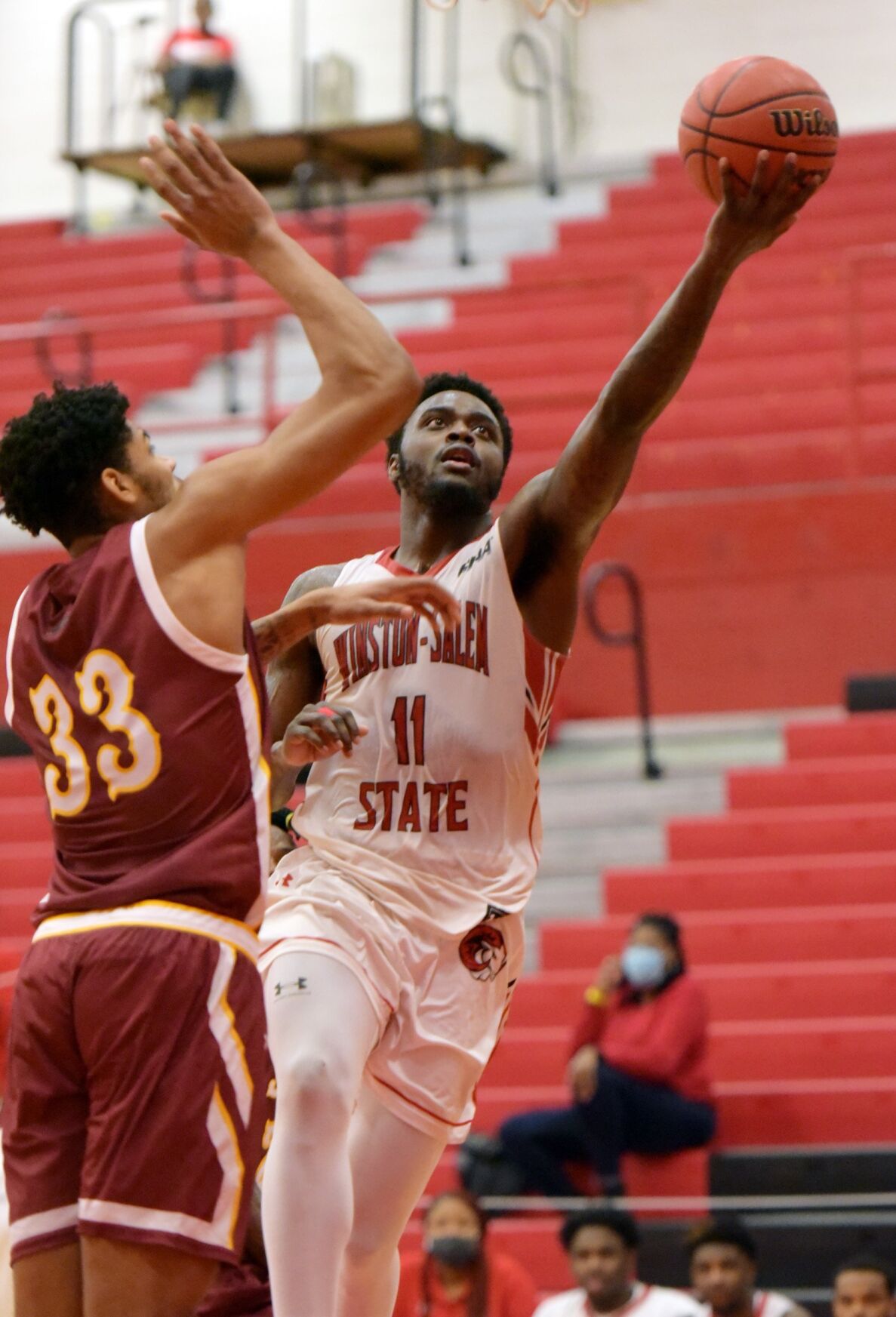 The evolution of the play of guards Samage Teel and Isaac Parson of Winston-Salem State is going well.

That much was evident on Saturday afternoon in the Rams’ 81-66 win over Shaw in front of about 200 fans at the Gaines Center.

The two, who are sophomores in the classroom but freshmen on the court, came to Winston-Salem from eastern North Carolina and are getting more and more comfortable in WSSU uniforms.

Going through the CIAA wars is not easy for rookies, but so far, so good.

The two were high-school rivals, but they aren’t rivals anymore.

“We’re teammates now and it’s been a lot of fun,” said Teel who had 20 points to help the Rams even their record to 2-2 in CIAA and 8-4 overall.

Parson had 21 points, three assists and three steals to go along with four rebounds and probably played his best overall game of the season. Cameron Campbell also scored 21 points and Xavier Fennell chipped in with 10 points with Jonathan Hicklin scoring seven points but getting a team-high 12 rebounds.

The Rams, the defending CIAA champions, played again without Coach Cleo Hill, Jr. who is out with COVID-19 issues. But assistants Ricky Wilson and Lance Beckwith didn’t miss a beat for the second straight game.

What’s helped Wilson and Beckwith and the Rams is how much Parson and Teel have improved seemingly by the minute.

“I think it’s been a process and it’s not something that started tonight,” said Wilson, who was the acting head coach again. “With the games we’ve played and the practices and the mistakes they’ve made it’s all about them playing games. Coach Hill always preaches confidence and when they have that you can see it.”

Teel had 23 points on Thursday night and made the game-tying 3-pointer in regulation at the buzzer that sent the game into overtime in a win over Virginia State. That confidence obviously carried over to Saturday afternoon.

“I think it’s just our team playing together and myself and Isaac stepping up,” Teel said about the evolution of their games. “Knowing that we’ve lost players (to injuries and COVID-19 issues) we know we have to play major minutes but we are ready.”

Thanks to little crowd noise at the Gaines Center it’s not hard to hear Beckwith convey messages to either Parson or Teel.

Beckwith had this to say during a lull in play as the Rams were closing the game out against the Bears (0-2 CIAA, 4-5 overall). “You’re the point guard you have to lead,” Beckwith told Parson. “You can’t worry about every little thing that happens. Just keep playing.”

If the Rams are going to defend their CIAA championship the continued improvement of Parson and Teel is paramount.

One of the benefits both of them had was last season when they got to go through a year in college without playing in games. Because COVID-19 wiped out last season the two worked on their academics and got stronger in the weight room.

“I think that did help us tremendously,” Teel said. “We wanted to play games of course but we were able to adjust a lot better.”

The luxury for the Rams is that both can play either guard position.

As for which of them is the better player, the question was asked when they were standing side by side. They looked at each and laughed.

“We’re on the same team so we aren’t going to answer that one,” Teel said with a smile.

Power forward WyKevin Bazemore was a freshman in 2012 when he helped the Rams win the CIAA title in Charlotte. His coach was Bobby Collins and one of the assistant coaches was Ken Spencer.

All three of them were on the bench coaching for Shaw.

“It’s great to be back in this building again,” said Bazemore, one of the top rebounders in school history. “I got goose bumps seeing the court and seeing this gym again.”

Collins, who coached eight seasons at WSSU before leaving for Maryland-Eastern Shore, was also glad to be back.

“This place is special and I was here for eight seasons,” Collins said. “Some of my former players are back here to see the game such as Stephon Platt and Joe Thompson so this is great.”

“I need an MRI on my heart so I’m waiting on that,” said Cooke, a transfer from Mars Hill is averaging a team-best 13 points a game.

Cooke, who has been on the bench the last two games in street clothes, jumped into the starting lineup right away once the season started.

Meanwhile Jaylin Parker, who was in a walking boot earlier this week, is no longer wearing the boot because of a slightly sprained ankle. He hopes to play on Monday night at Elizabeth City State.

The WSSU women were without Coach L’Tona Lamonte who was out with COVID-19 issues for the second straight game. Assistant Dexter Jenkins filled in as the head coach as the Rams rolled to a 96-44 victory.

“We know that Coach Lamonte will eventually be back but we are just playing our game and doing the little things to be successful,” said Amaya Tucker, who had 15 points, five assists and four steals.

Kennedi Simmons had 12 points as the Rams shot 60% from the field and enjoyed a 37-33 edge in rebounding.

The schedule will be fluid

During the battle of COVID-19 this season the WSSU schedule will be changing on a daily basis.

The WSSU women’s game scheduled for Monday night at Elizabeth City State was postponed while the WSSU men are still scheduled to play.

On Wednesday the Virginia Union women will play at WSSU at 5:30 p.m. which is a makeup game.

WSSU and Bowie State will make up a doubleheader on Jan. 31 at the Gaines Center. The doubleheader was postponed from mid-December because of COVID-19 issues at Bowie State.

“Our schedule will continue to be updated as we try to get these games in,” said Etienne Thomas, who is WSSU’s athletics director. “All of the AD’s within the CIAA are in constant communication.”

After Monday’s game at Elizabeth City State the WSSU men’s team is scheduled to play Saturday at St. Aug’s at 4:30 p.m.

WSSU women, despite having only seven available players, win in the first game of the CIAA doubleheader

Torry Holt, Muggsy Bogues, Timmy Newsome and Dave Robbins among those in this year's class

Ram Ramblings: CIAA pushes ticket sales for tournament in Baltimore despite the pandemic getting in the way

The tournament will begin in 31 days and the only requirement for fans, according to conference officials, will be masks

WSSU beats St. Aug's in an empty gym that looks nothing like the usual CIAA basketball experience

Only about 100 fans are there as Rams, with five players out as well as Coach Cleo Hill Jr., win in overtime.

Winston-Salem State’s Cameron Campbell (left) and Shaw’s Denari Garrett battle for a loose ball in the Rams’ 81-66 win on Saturday at the Gaines Center.

Winston-Salem State’s Samage Teel has been getting better and better with each game.

Winston-Salem State's Isaac Parson passes to the wing as he leads the Rams in transition in the Rams' 81-66 win over Shaw.

Shaw head coach Bobby Collins, formerly the head coach at Winston-Salem State, directs the Bears in their 81-66 loss to the Rams on Saturday at the Gaines Center.