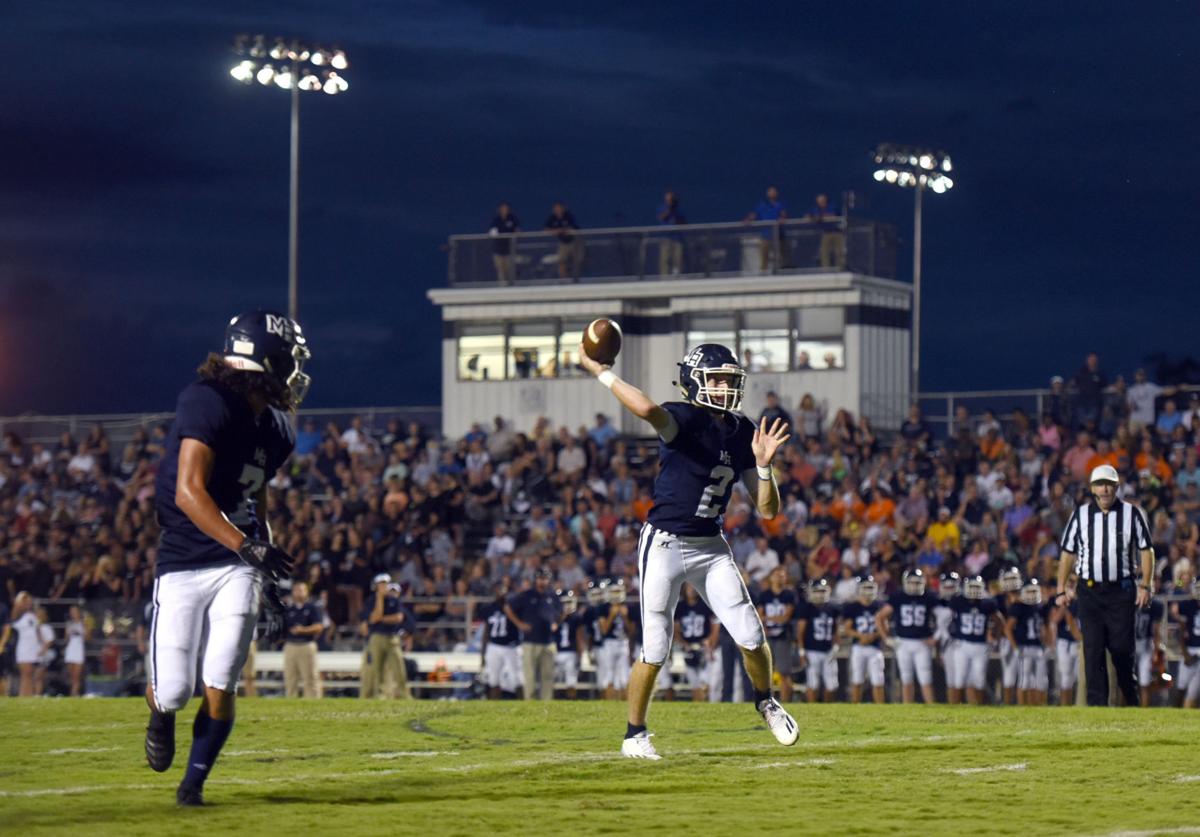 Mount Airy quarterback Holden Poindexter looks for a receiver in the Granite Bears' 42-13 win over Elkin on August 31, 2018 at Wallace Shelton Stadium. 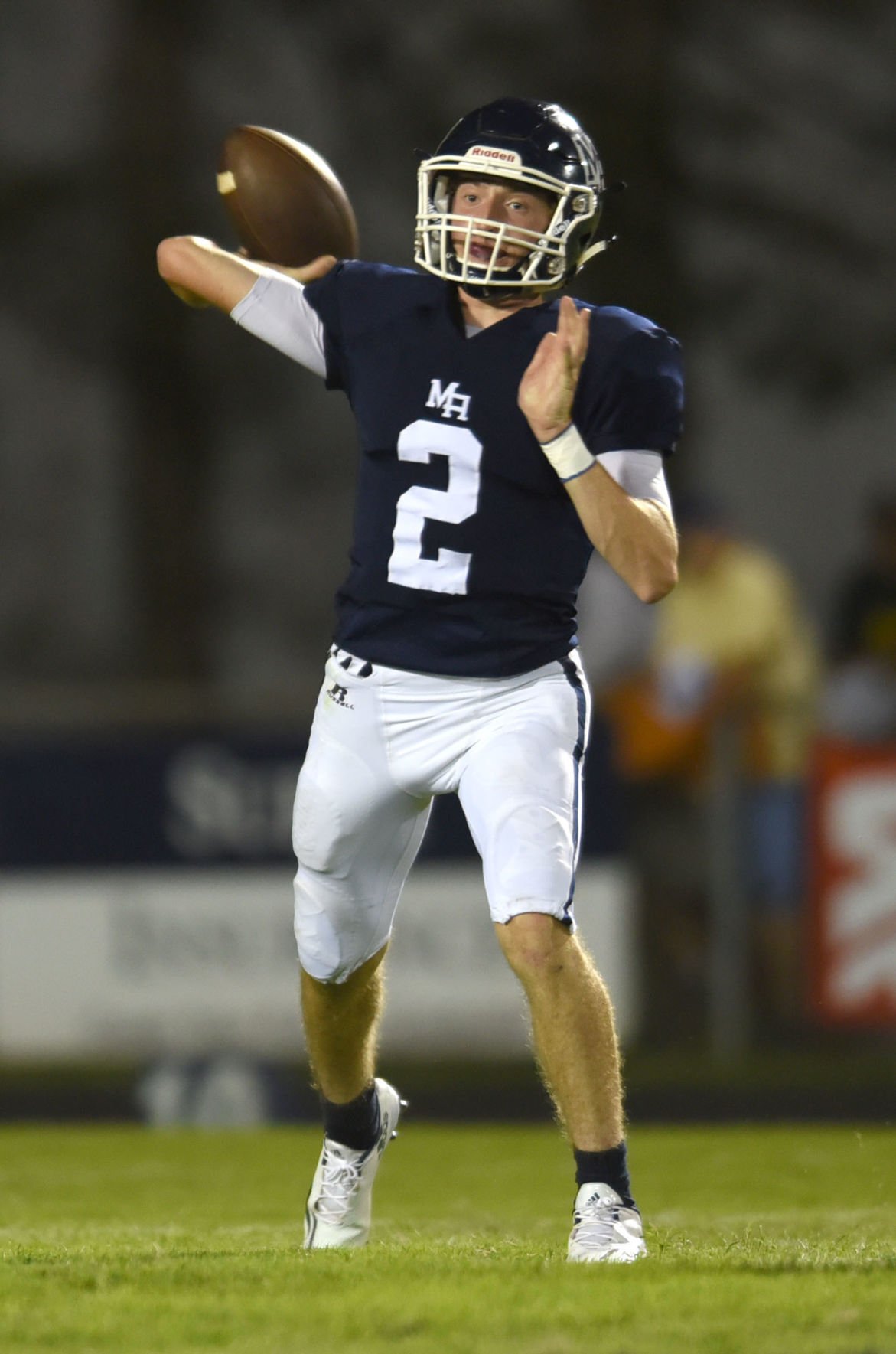 Mount Airy quarterback Holden Poindexter helped lead the Granite Bears to a Northwest 1-A title in his 2018 debut. But a herniated disk forced him to miss the next season and spend eight months recovering.

Mount Airy quarterback Holden Poindexter looks for a receiver in the Granite Bears' 42-13 win over Elkin on August 31, 2018 at Wallace Shelton Stadium.

Mount Airy quarterback Holden Poindexter helped lead the Granite Bears to a Northwest 1-A title in his 2018 debut. But a herniated disk forced him to miss the next season and spend eight months recovering.

Holden Poindexter, then a junior quarterback at Mount Airy, was forced to sit out following a stellar performance two years ago as the Granite Bears' new face under center. That occurred after a herniated disk in his lower spine — a nagging pain which got progressively worse upon his return from a football camp at Eastern Kentucky last summer — eventually required surgery in September.

The roughly eight-month road to recovery left Holden, who as just a 15-year-old starter threw for 3,135 yards, 40 touchdowns and contributed to a Northwest 1-A title during his debut in 2018, standing on the sidelines in a support role for his replacement, Zeb Stroup.

Zane recalled his son's burning desire to play football came at a young age, even mentioning a crinkled fill-in-the-blank sheet of paper with the heading "I am special! God made me and knows me." A 6-year-old Holden scribbled his favorite activity was football. And that season with the Granite Bears, just before last year's injury, brought about low Division I and Division II interest — Eastern Kentucky, Miami (Ohio) and Catawba included.

"That's what he's loved all his life," said Zane, who is the Mount Airy fire chief. "It's gone from having and thinking, 'Man, he's got some big-time Division I schools that are calling and asking about him,' to all the sudden he's off the map.

"... He has been purposely driven the last offseason to get back and be ready for this (season). It's like every time something comes out — even if it has nothing about Mount Airy High School or the Northwest 1-A, even if it's other districts in other states canceling their football — it's just a gut punch after another gut punch leading up to, you know. It feels like it's just creeping in on us."

Questions about a fall sports season's fruition because of the coronavirus outbreak motivated Zane to finally craft a pair of emails to the N.C. High School Athletic Association's board of directors and Commissioner Que Tucker on July 17. The note, which included Superintendent Kim Morrison of Mount Airy City Schools, was a plea for Holden, medically cleared about three months ago, to get a shot at quarterback as a rising senior — the final attempt to drum up a college scholarship, or a few, to eventually study physical therapy.

But his son was just a vignette of an expansive dilemma for athletes yearning for one last season and a chance to undergo recruitment.

"I just felt like I thought I needed to reach out and do just a plea for my son and all the others, around this state, that could be in the very exact same shoes that he is," Zane said. "I'm sure probably across the state there's not only my son, but there's lots of others that have unfortunately lost their junior year due to an injury.

"They need it — they need this interaction. Courses of lives could be changed by the outcome of this because, you know, some people may get college offers and some may not. Some that may not may completely go down a different road in life, and it change the path of so many young men."

Zane said an urge to send the letter came out of growing concern as the NCHSAA released three-phase guidelines for a the lifting of its dead period on sports, with limited conditioning workouts beginning June 15. School systems across North Carolina implementing variants of Gov. Roy Cooper's hybrid framework of in-person and virtual learning in the fall, announced on July 14, didn't add confidence.

"To me, it means a whole lot more than what people would really expect," Holden said of a final season. "... Football has really always been my passion. It's always been what I've been the best at, and it's been always what I've cared the most about."

Zane advocated for the NCHSAA, if large districts opt against a season already pushed back with an inability to commence practices until "at least" Sept. 1 following the association's July 15 announcement, to permit school districts willing and able to play to move forward with modified schedules. Surry County accounts for 737 of the state's more than 108,000 COVID-19 cases, according to Friday's data from the N.C. Department of Health and Human Services.

In the email, he cited rationale from Mandy Cohen, the state's health secretary, noting a young K-12 population was less likely to spread or have severe illness from COVID-19 contraction than older demographics. According to the N.C. DHHS, children ages 0 to 17 make up roughly 11% (12,031) of statewide coronavirus cases. Zane said he even had a personal experience with the virus, when his 19-year-old nephew got what was described as "like a bad case of the strep throat."

And his son uncovered a passion for physical therapy following that injury to his lumbosacral joint. Holden said, prior to undergoing a microdiscectomy, he could barely touch the tops of his knees. Months spent at Choice Physical Therapy & Wellness in Mount Airy changed that — and, eventually, offered another chance to train for what may lay ahead.

A nixed season, however, was tough to envision.

"Not only is it my senior season, but it's everybody's chance to get recruited — for any grade," Holden said. "Especially for a senior, it just hurts a lot to think about how it could possibly be canceled."