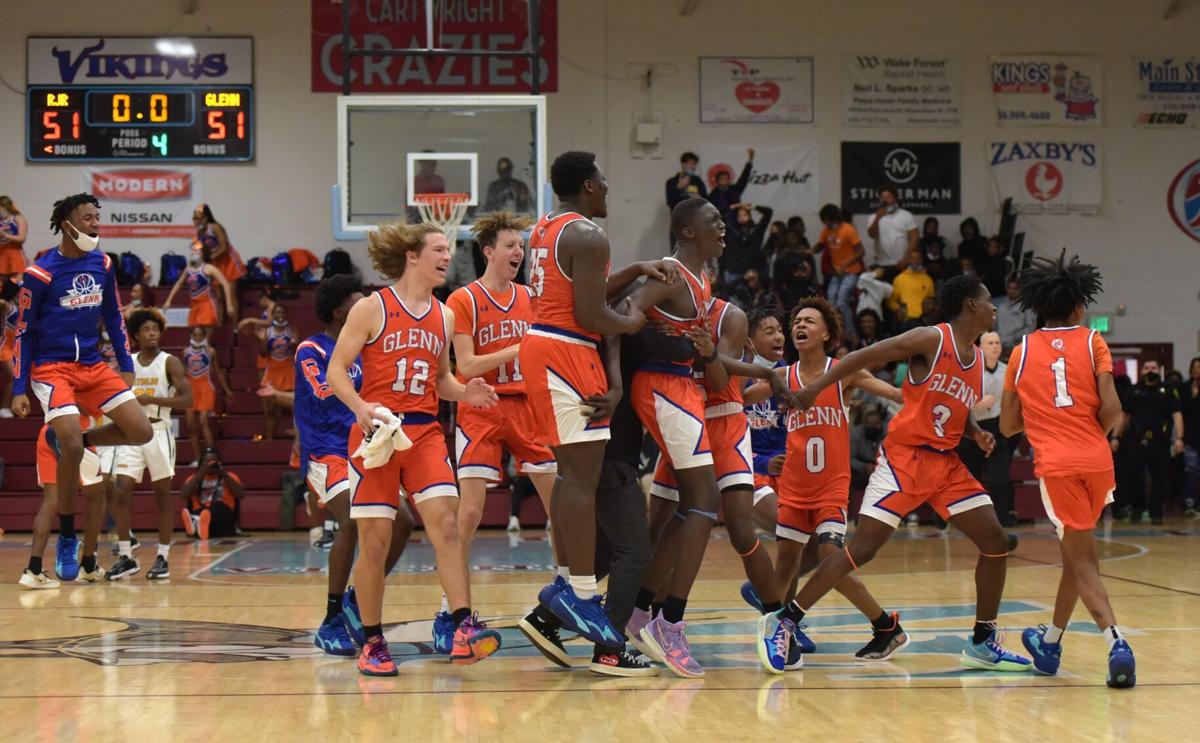 Glenn's Chol Adichol is mobbed by teammates after sinking the game-winning basket with one second remaining in the Bobcats' 53-51 win over Reynolds in the Frank Spencer Holiday Classic Pepsi bracket championship Thursday at North Forsyth High School. 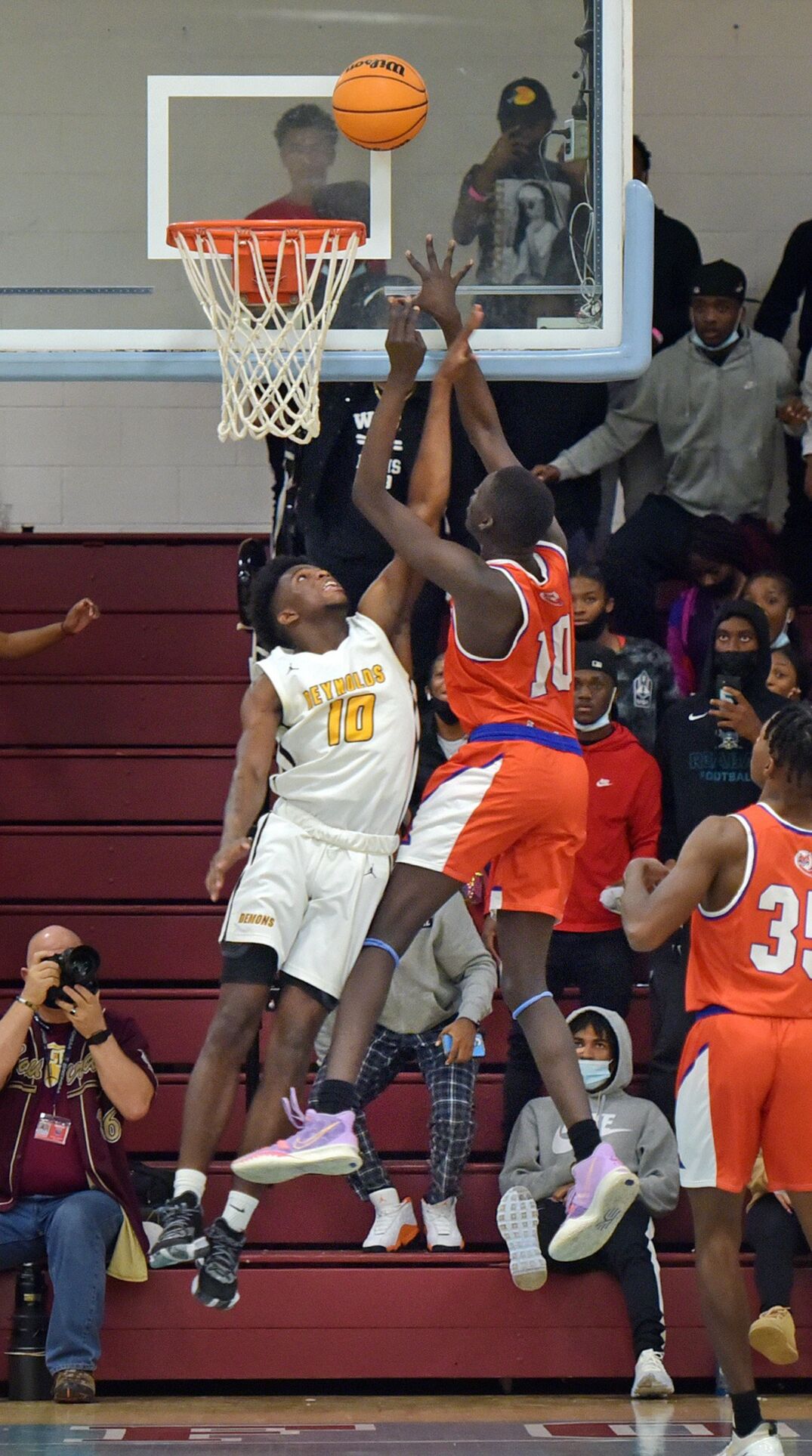 DAN KIBLER Special to the Journal

With point guard Zion Dixon in control of the basketball and a game on the line, Jonathan Gainey, Glenn’s basketball coach, feels pretty good that things will work out in the Bobcats’ favor.

On Thursday night, they did.

With the score tied and triple-teamed by three Reynolds defenders after a tie game, Glenn inbounded the ball with 8 seconds left. Dixon got the ball to teammate Amani Mock, whose jumper from the corner was short. The ball settled into the hands of teammate Chol Adichol, whose follow shot with one second left gave the Bobcats a 53-51 win in the championship game of the Frank Spencer Holiday Classic’s Pepsi bracket in North Forsyth’s Cartwright Gym.

“When the ball is in his hands, I’m comfortable,” Gainey said. “I give him the keys to the car, and he knows how to drive it.”

In Wednesday’s semifinal win over top-seed Mount Tabor, Dixon got in a one-on-one situation with time running out, drove to the basket, drew a foul and made both free throws in the Bobcats’ 2-point win. Last night, Reynolds wasn’t about to let that happen, so they blanketed Dixon as soon as he received the inbound pass, forcing him to give it up.

Watching the final seconds play out from near midcourt last night, Dixon, who led all scorers with 18 points, acknowledged that he was worried.

Adichol, who scored 12 points, was named the tournament’s most outstanding player. He joined Dixon, Will Gray of East Forsyth and M.J. Raye, Seth Reed and Eli Calhoun on the all-tournament team.

“The shots were falling for us,” said Dixon, who made two 3-pointers and had 11 points in the first half, then knocked down a 3-pointer, drove for a layup and made two free throws in the second half. “Everybody was shooting, and I was able to drive and get the ball to some of my teammates for 3s.

“We spread the flood because we’re quicker, and we knew if we could get to the basket and they didn’t have any help in the lane, we’d get some baskets.”

The Bobcats led 13-10 after one quarter and built a 10-point halftime lead by knocking home back-to-back-to-back 3-pointers from Dixon, Yorel Harris and Mock. Glenn’s biggest lead was 26-13 before the Demons battled back behind M.J. Raye, who had five of his 11 points in the second quarter.

Reynolds started whittling away at Glenn’s lead in the third quarter, trailing only 43-40 entering the final period. Eli Calhoun’s 3-pointer on the first possession of the fourth quarter tied it, then Dixon and Kenaz McMillian traded free throws before baskets by Mock, Anthony Davis and Dixon made it 51-45. But that was the last time Glenn scored until Adichol’s game-winning basket.

Raye hit from the key, Calhoun dropped home a 3-pointer and McMillan hit a free throw with 28 seconds left, setting up the Bobcats’ last-second heroics.

“I knew it would be a game of runs,” said Gainey. “I knew they would come back, and they made it a little closer than I wanted, but like we tell the kids, ‘You’ve got to play 32 minutes. You can’t just win the first half.’”

When you talk to Olon Shuler’s former North Forsyth High School basketball players, the coach’s sartorial splendor is as likely to weave its w…

PFAFFTOWN — Visiting East Forsyth finished the first quarter on a 17-10 run, survived some spotty free-throw shooting in the second half and d…

KERNERSVILLE — Basketball is often a game of runs, and last night Glenn’s Bobcats had two big ones on the way to their ninth straight win, 70-…

All-conference teams as selected by each league that includes area teams.

Dixon lifts Glenn to victory over East Forsyth in overtime

Glenn’s Bobcats strengthened their hold on first place in the Central Piedmont 4A last night, outscoring Mount Tabor 24-5 in the third quarter…

KERNERSVILLE — The much-anticipated battle for first place in the Central Piedmont 4-A Conference was strictly no contest.

Glenn's Chol Adichol is mobbed by teammates after sinking the game-winning basket with one second remaining in the Bobcats' 53-51 win over Reynolds in the Frank Spencer Holiday Classic Pepsi bracket championship Thursday at North Forsyth High School.