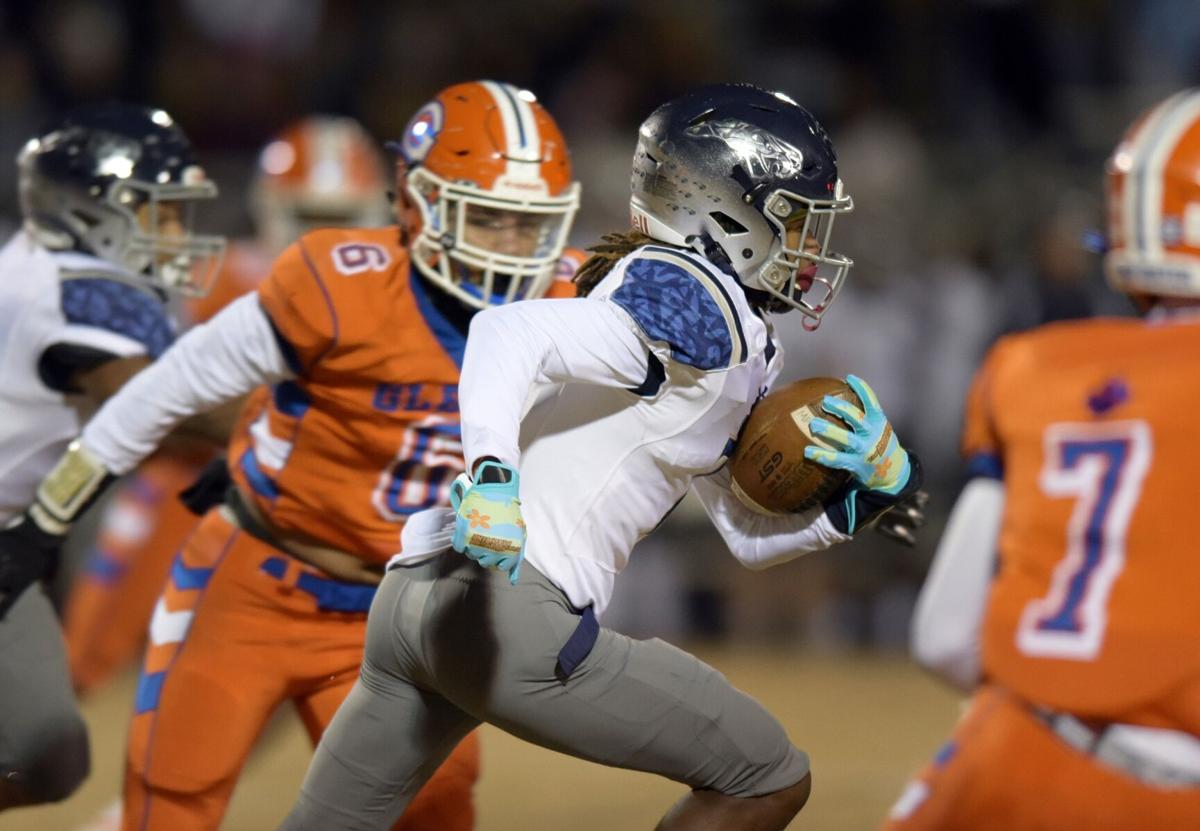 East Forsyth’s Que’sean Brown runs back the opening kickoff for a touchdown in the Eagles’ 14-0 win Friday night over archrival Glenn in the third round of the NCHSAA Class 4-A playoffs, at Glenn. 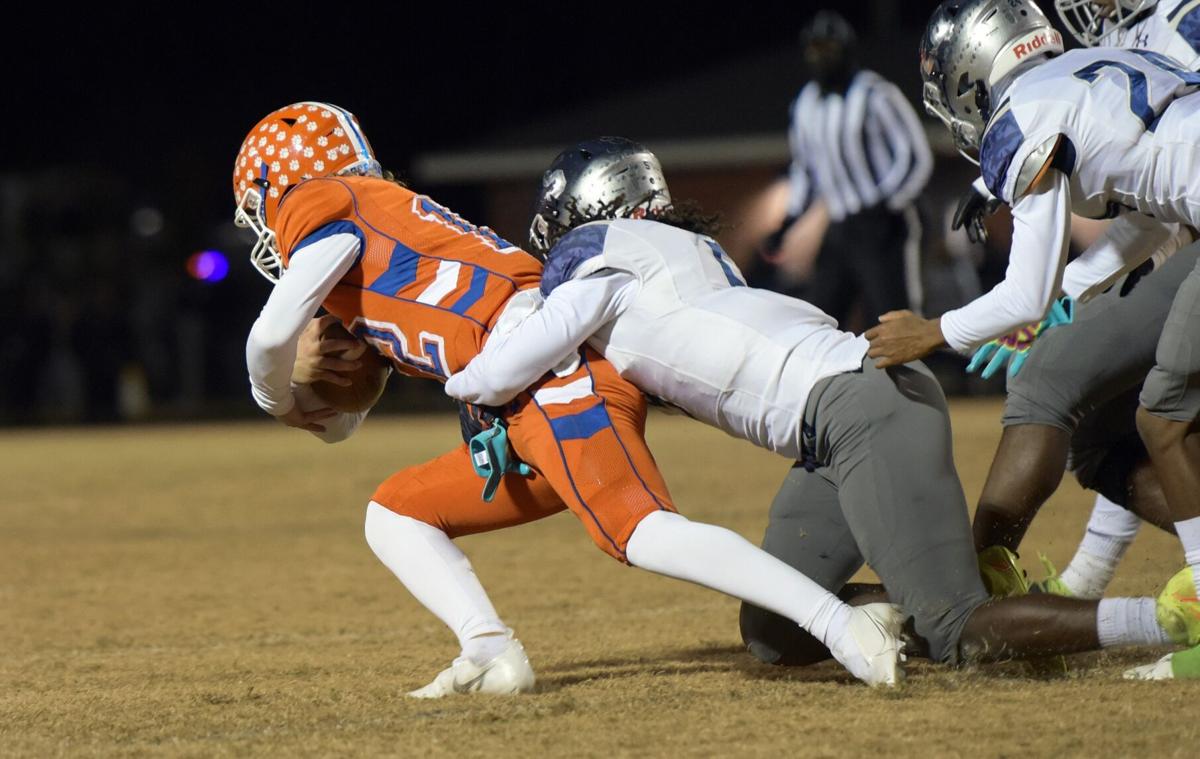 East Forsyth’s linebacker R.J. Brown takes down Glenn quarterback Camden Coleman in the Eagles 14-0 win over archrival Glenn in the third round of the NCHSAA 4A playoffs, Friday, Nov. 19 at Glenn. 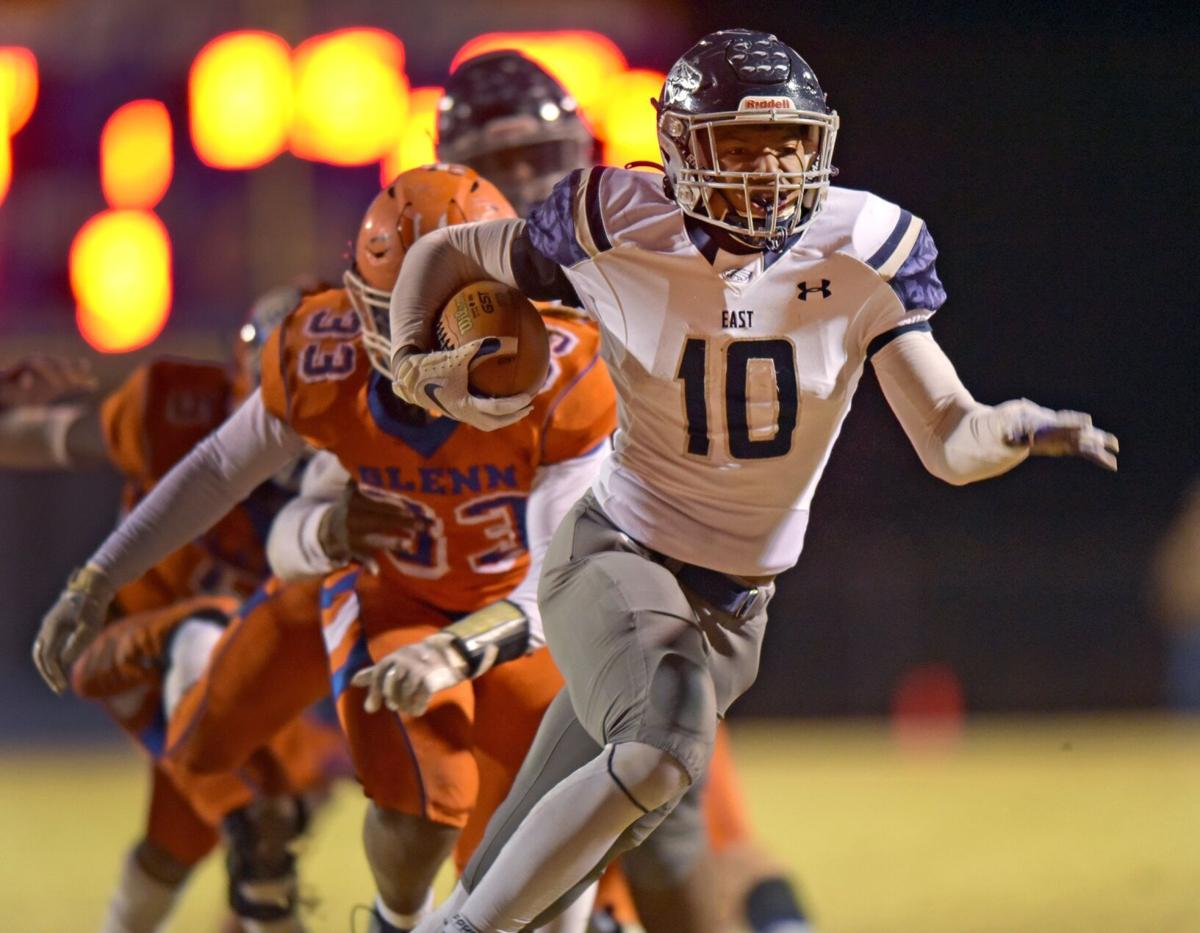 East Forsyth’s running back Quan Porter carries the ball on a long second half run that set up the Eagles’ second touchdown on Friday night against Glenn.

DAN KIBLER Special to the Journal

Last night, in the third round of the Class 4-A NCHSAA football playoffs, East Forsyth’s special teams were a little bit more special.

The Eagles got a 78-yard touchdown return by Que’sean Brown on the opening kickoff, then East’s punt-coverage team recovered a key fumble to set up another score in a 14-0 win over crosstown rival Glenn.

The 13th-seeded Eagles, 11-1, will play at top-seeded Cornelius Hough in the quarterfinal round next Friday night. Glenn’s season ended at 9-3.

“Our defense was awesome; the defensive staff had another great plan, and our special teams came up big,” said Todd Willert, East Forsyth’s coach. “We told everybody we had to win the special teams, and we got one touchdown and set up another.”

The shutout was East’s third in a row in the playoffs.

The Eagles won despite gaining only 154 yards, and 100 of those were through the air, but they led only 12 seconds into the game when Brown fielded William Nogueras’ opening kickoff at the 22 and zipped back up the middle untouched, getting through Glenn’s first line of tacklers and outrunning everyone the rest of the way.

“All I saw was green grass,” said Brown, a junior. “One guy tried to touch me, but he didn’t. It was good blocking by my teammates. We had (the return) set up for the middle, and I hit the hole fast. When I saw the hole, I knew it was over. Nobody should ever catch me from behind.”

The Eagles tacked on their second touchdown midway through the fourth quarter after Glenn’s defense had shut East’s offense down on three plays, including an 11-yard sack of quarterback Jaylen Raynor on fourth down.

Andrew Conrad’s punt sailed down to the Glenn 40, where it was muffed by Glenn return man Levine Smith. East’s Rashad Payne recovered at the 38, and six plays later Raynor punched it over the goal line with 6:26 to play. Conrad’s second PAT made the score 14-0.

Glenn got only one first down the rest of the way and never threatened against an East defense that limited the Bobcats to 158 yards of total offense.

The Bobcats threatened twice, once in each half. After Brown’s kickoff return, Glenn got a 57-yard kick return from A.J. Coverdale, and the Bobcats drove to the East 1, but they lost 3 yards on four downs and turned the ball over.

Late in the third quarter, Glenn put together its best drive, moving from its own 14 to the East 12 on 16 plays, taking more than 8 minutes off the clock, before Nogueras badly missed a 30-yard field goal attempt.

With offensive opportunities few and far between, both teams tried to make the most of any threat they had. In the first half, the Bobcats turned down opportunities to punt twice more on fourth down. The Eagles turned them aside and took over on downs once, and Glenn threw an interception on a fake punt.

The Eagles went for it on one fourth down, and the Bobcats stopped that threat, but a fumble on the ensuing series set East up at the Glenn 23. The Eagles got a quick first down at the 9, but a loss and a penalty put the ball back on the 13, and Tyree Burke of Glenn blocked a 30-yard field goal attempt by East’s Andrew Carter as the first half ran out.

“I believe in this defense; this is our third shutout in a row in the playoffs,” Willert said. “Our defensive coaches did a great job. We just tried to stop ‘em. Nick Martin (a junior defensive end) had another great night. I thought he almost had a strip sack in there at the end.”

East Forsyth’s Que’sean Brown runs back the opening kickoff for a touchdown in the Eagles’ 14-0 win Friday night over archrival Glenn in the third round of the NCHSAA Class 4-A playoffs, at Glenn.

East Forsyth’s linebacker R.J. Brown takes down Glenn quarterback Camden Coleman in the Eagles 14-0 win over archrival Glenn in the third round of the NCHSAA 4A playoffs, Friday, Nov. 19 at Glenn.

East Forsyth’s running back Quan Porter carries the ball on a long second half run that set up the Eagles’ second touchdown on Friday night against Glenn.