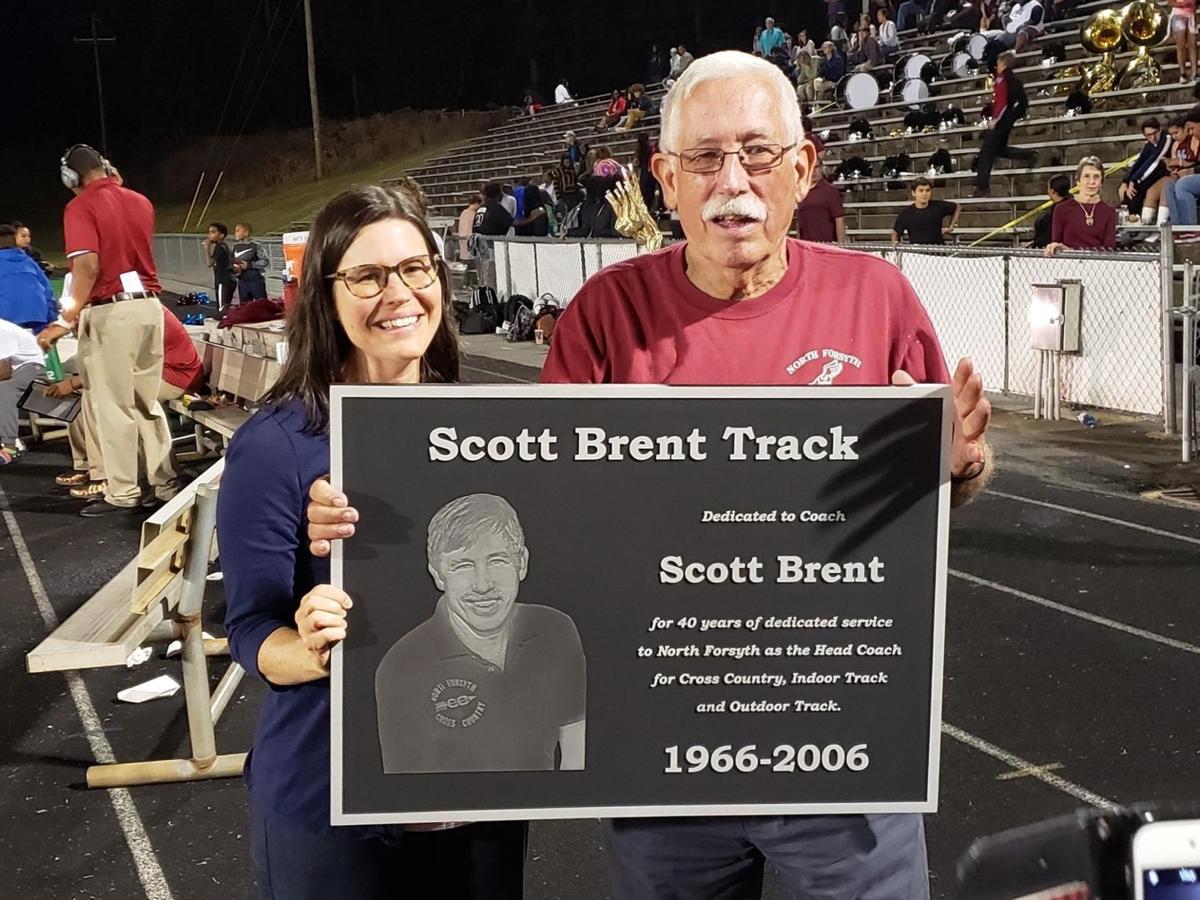 Scott Brent poses with Caroline Fleischer, holding a plaque presented during the dedication of the track at North Forsyth in September. 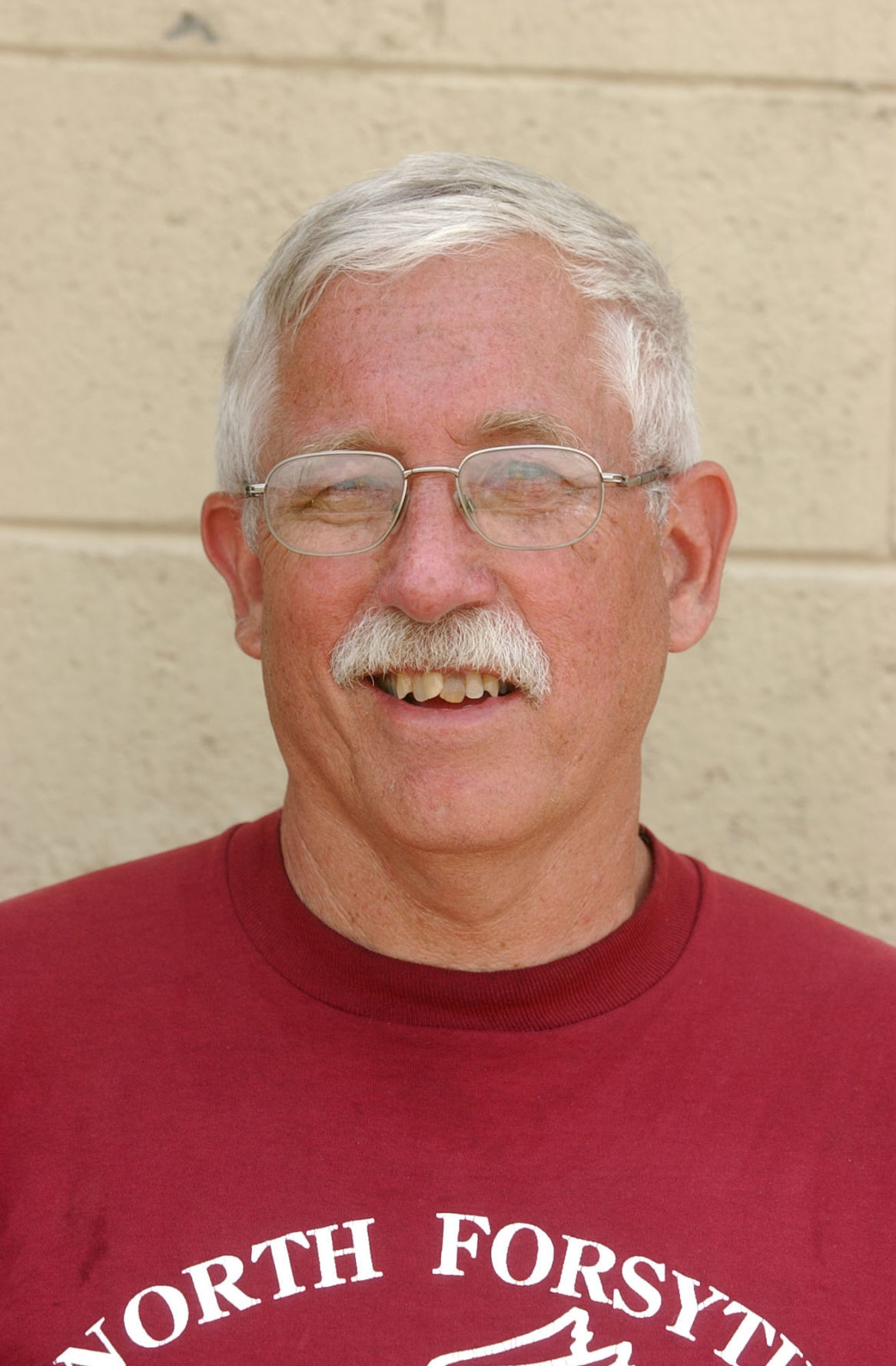 Sean Vestal has a few brief snapshots of Scott Brent, the longtime track and field and cross country coach at North Forsyth, engrained in his memory.

Vestal, now the Vikings' athletics director, arrived on the high school's campus in 1998. He took a job as a health teacher and was a young head coach of the volleyball program and an assistant for baseball and girls basketball. Brent, a fixture at North Forsyth whose tenure started in 1966, was "kind of on his way out," Vestal said — hardly so, since he stuck around the campus stretching back just six years ago as a volunteer.

He was no stranger to grueling work. Vestal said it was common to catch Brent with a push lawnmower, trimming the cross country trails at North Forsyth — even gripping a chainsaw in the woods.

"As a young coach, you don't really walk up to people and start asking questions," said Vestal, who was named the athletics director at North Forsyth in 2013. "The thing about Scott was he led by example. Just watching his work ethic — watching how he got along with all his athletes and watching how he was willing to give extra time where it was needed.

"... Just watching him, and watching what he did, was probably one of the most profound things that I remember."

Brent, whose coaching career spanned more than 40 years and included three state titles, died Monday at age 80 of complications from open-heart surgery, according to Tiffany Brent, his daughter-in-law. And during those few decades — roughly three as a history teacher at North Forsyth — Brent had a lasting impact on the county's high school running community. The track inside Nifong-Crafford Stadium is named for Brent, who joined the Vikings' athletics hall of fame in 1987.

"When you mention track in Forsyth County, I would think if you've been around for a while, Scott Brent is one of the first things you hear," Vestal said. "Not only was he good for North Forsyth, he was good for all the schools."

Brent, whose teams claimed five conference titles during his tenure from 1966 to 2006, founded the Forsyth County Championships, an annual track and field competition in the spring for area teams, and directed the meet for 15 years. When Brent retired from coaching, he remained a volunteer with the Vikings' programs from 2007 to 2014.

The Scott Brent Invitational, a two-day track and field meet typically held at Mount Tabor in April, included NCHSAA member programs from across Forsyth County. According to Patrick Cromwell, the track and field and cross country coach at Mount Tabor, admission for the event is divvied up equally among the participating high schools for indoor meets at JDL Fast Track.

Cromwell, who finished his 13th year at Mount Tabor, had just joined the Spartans when Brent shifted to volunteering. Cromwell recalled it was a "highlight" to introduce Brent to the crowd at the invitational — and, occasionally, that involved tracking him down. According to Cromwell, Brent would disappear to officiate events like the shot put or measure for the long jump.

"At random places — I'm helping out at a middle school meet, and Coach Brent pulls his bus up and lets kids off," Cromwell recalled. "He would do field trips for the school and still drive the bus. And he definitely, although he officially retired, I don't think there was ever a track and field event at North Forsyth and the county meet where he wasn't present."

Less than a year into her return to campus, Brent asked Fleischer to help coach girls track. Every afternoon was spent with the longtime coach — even two or three times per week in the summer.

Fleischer said Brent meshed with her family. Her youngest of two sons, 9-year-old Joel Scott Fleischer, was named in honor of Brent.

"So many people looked at him as a father figure. It wasn't just me."

"It wasn’t hard to want to give it your all and run hard for Coach,” said Mack, who graduated from North Forsyth in 2003. “He worked nonstop and would be out there at 7 a.m. mowing the cross country track and painting the roots of trees white so us runners would be know the roots were there.”

Norman Trzaskoma, who was the track and field and cross country coach at Reynolds from 1973 to 2010, said he could count on Brent filling every event — and that included preseason meets. The longtime coach, for whom the annual fall city-county cross country championship is named, competed against North Forsyth often.

"There's nothing more frustrating than having a pole vaulter or a discus thrower and the other team doesn't. But I knew he would always have somebody in every event," said Trzaskoma, now the head hurdles coach and an assistant with sprints at Mount Tabor. "And then it made me want to do the same thing, of course.

"It's kind of strange, how it sounds. But he built up his own team by building up the sport, which benefited every school in town."