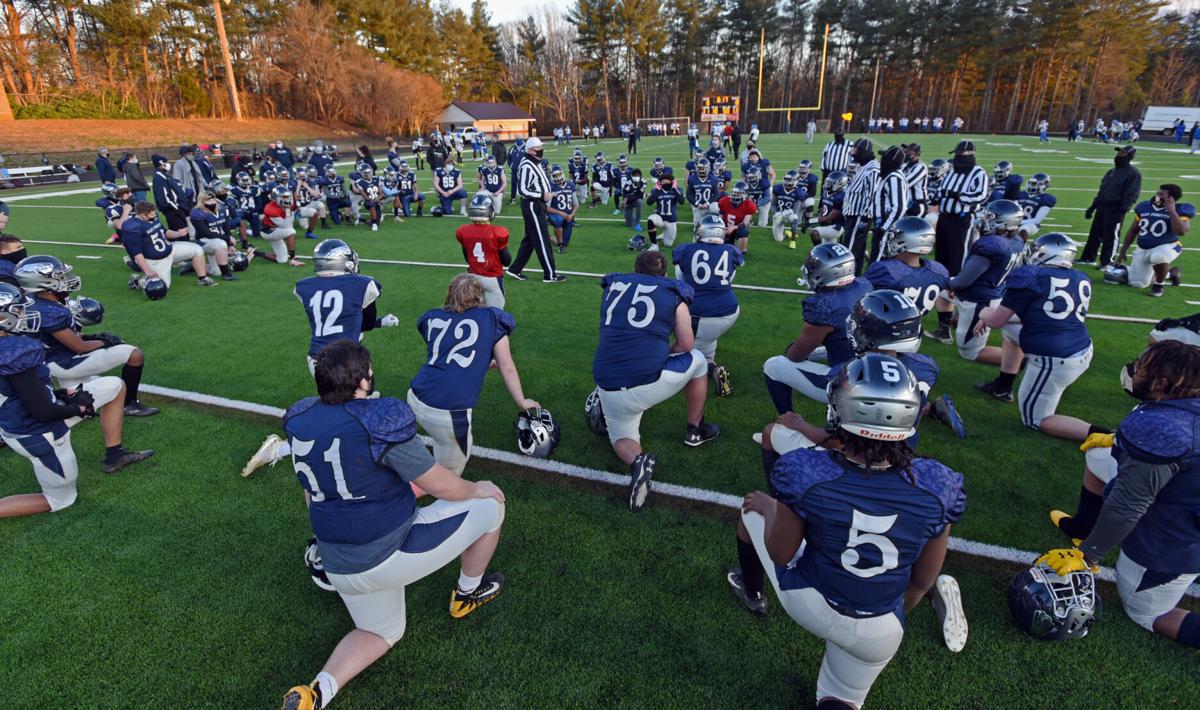 East Forsyth football players listen as officials talk about this season's points of emphasis before a scrimmage last week at Davie County Community Park in Mocksville. 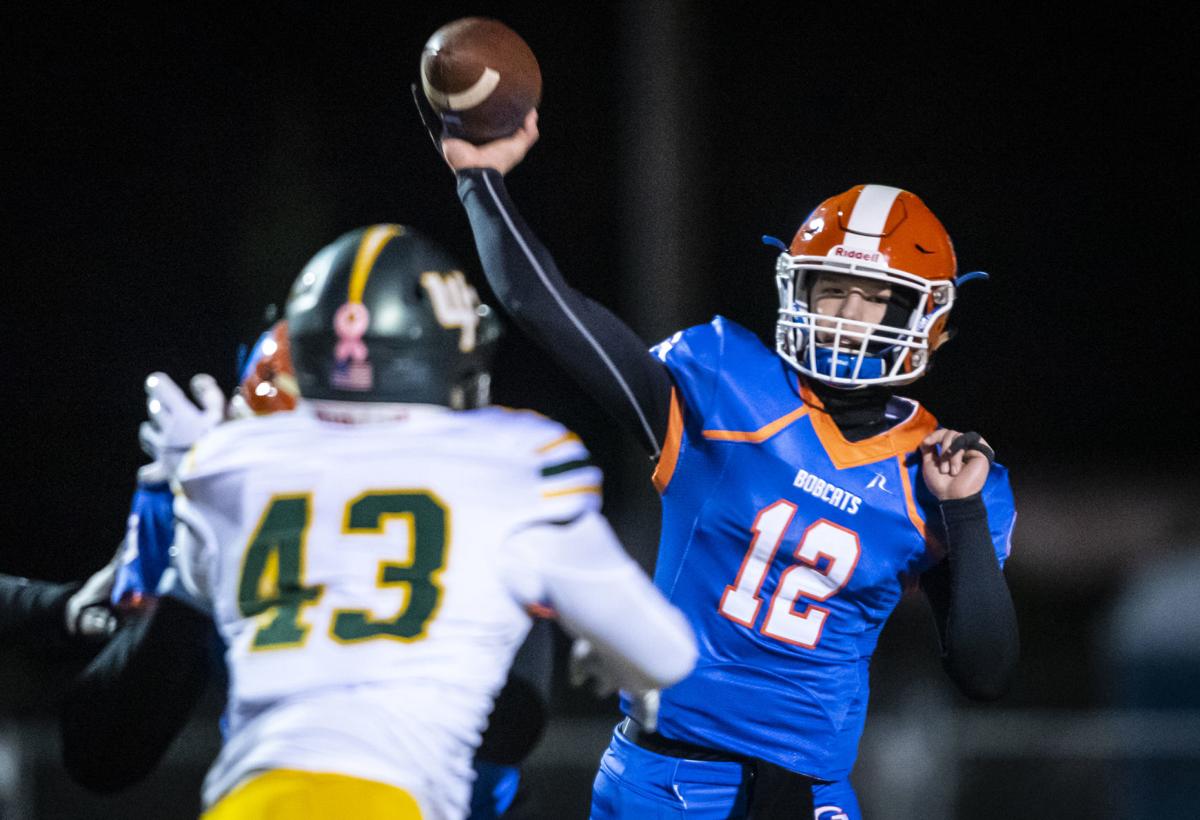 Glenn quarterback Camden Coleman (12) passes on Nov. 8 against West Forsyth in the final week of the 2019 regular season.

It's been more than a year since NCHSAA schools played football, but a season delayed because of COVID-19 finally kicks off Thursday night across the Triad. Here's a look at the teams, players and games we'll be watching closely throughout the seven-game regular season and the playoffs:

EAST FORSYTH: If the NCHSAA season had been played in the fall, WR Micah Crowell (N.C. State), OL Jaden Lindsay (Appalachian State), QB Ty Lyles (Coastal Carolina), DE Zyun Reeves (N.C. State) and WR Jamison Warren (N.C. A&T) would have been back to help the Eagles seek a third straight NCHSAA Class 4-A title. Instead, the quintet enrolled early in college. But don’t feel too bad for coach Todd Willert, because he has a talented if inexperienced group. It will be interesting to see who emerges as playmakers.

NORTH DAVIDSON: QB Tedric Jenkins and WR Jamarien Dalton may have a bit of a basketball hangover, but they combine with RB Jaylin Walser to give the Black Knights some offensive firepower. It’s defensively where there are questions, although junior LB Tanner Jordan is a force. The annual rivalry matchup with Oak Grove on April 9 should tell a lot about this North Davidson team.

REAGAN: No area team has more college signees back than the Raiders, and that should make coach Josh McGee’s team a contender in the Central Piedmont 4-A. QB Gabriel Hollingsworth will be hard to replace, but Bryson Canty, Sanchez Redden and Tazhae Woods are all playmakers and Duke-bound Andrew Jones anchors the line. LB Gavin Brandon and DBs Jon Gullette and Shamar Revel lead a defense that has to rebuild up front.

WEST FORSYTH: Much like rival East Forsyth, the Titans must replace a lot of talent and experience, although coach Adrian Snow knew he was losing most of them because they were seniors. The offensive line must be rebuilt, but still has Georgia signee Jared Wilson to anchor the group, and RB G’mone Wilson will be hard to replace. Junior LB Mack David will have to lead the way for a young team.

RB TATE CARNEY, junior, Davie County: Whether as a runner or a receiver, Carney is a playmaker. The younger brother of former Wake Forest back Cade Carney, Tate rushed for 1,243 yards and 22 touchdowns and caught 58 passes for 739 yards and four scores as a sophomore. He won’t have QB Nate Hampton (Liberty) or WR Jack Reynolds (Charlotte) around this year to share the offensive load, so he’s likely to get even more touches.

QB CAMDEN COLEMAN, junior, Glenn: Coleman passed for 1,725 yards and 12 touchdowns as a sophomore. He needs to limit interceptions after throwing 17 last season, but he has plenty of talent around him in WR Aronson Cook, WR Anthony Davis, ATH Devin Flowers, WR Markell Lloyd and RB Monterious Godfrey.

TE BENJI GOSNELL, junior, East Surry: A consensus four-star recruit who has already committed to Ohio State, Gosnell has the athleticism to do one-footed backflips and the toughness to project as an elite-level linebacker if he wasn’t such a great prospect at tight end. It will be interesting to see how many different ways coach Trent Lowman finds to deploy Gosnell.

RB B.J. McINTYRE, senior, Mount Tabor: The senior always runs hard and will be looking to build on a 2019 season in which he had 1,057 yards and eight touchdowns. ATH Collin Smith and future West Point LB Josiah Banks are also back for a Spartans team that reached the third round of the Class 3-AA playoffs.

MOUNT TABOR at REAGAN, Friday: Mount Tabor always seems to start slowly and that may be particularly true this season with a number of Spartans still participating in the NCHSAA basketball playoffs. But Tabor does have the kind of speed and athleticism to test an experienced and talented Reagan team that is thinking big this year.

GRIMSLEY at EAST FORSYTH, March 5: These teams played two of the best games of the 2019 season, with East prevailing 21-20 in the regular season and again in the playoffs on the way to a Class 4-A championship. Grimsley can make a statement about its title aspirations early in this season.

REIDSVILLE at EAST SURRY, March 5: It would be hard to top East Surry’s 55-49 shootout win in 2019 that set the stage for both teams winning state titles, the Cardinals in Class 1-AA and the Rams in 2-A. East Surry lost a lot of talent from arguably the greatest team in school history, but the Cardinals haven’t lost their swagger and they still have TE-LB Benji Gosnell.

EAST FORSYTH at WEST FORSYTH, March 12: Eagles vs. Titans. Todd Willert vs. Adrian Snow. Two of the state’s best coaches keep this rivalry game interesting every year, and this should be no exception. The only negative is that this one isn’t played at the end of the season, but East Forsyth saves that spot for its annual game with Glenn in Kernersville.

Editor's note: An earlier version of this story incorrectly said that West Forsyth's Jared Wilson had enrolled at Georgia. Wilson is playing for the Titans this spring.

Here are some things to know about the spring 2021 NCHSAA football season, which was delayed because of the COVID-19 pandemic:

Teams will be limited to seven regular-season games, and if games have to be postponed because of weather or COVID-19 protocols, teams are limited to two games in a seven-day period with a minimum of three days off between games.

Who makes the playoffs?

Each classification will include 32 teams instead of 64, with the 32 teams evenly split into A and AA subdivisions based on enrollment. Conference champions qualify automatically, as will second-place finishers in conferences with at least seven teams (Mid-Piedmont 3-A, Central Carolina 2-A, PAC 7 2-A, Western Piedmont 2-A). Once those teams are in and seeded via a random draw, wild-card teams will fill out the brackets.

When do the playoffs start?

The brackets will be released April 10 and first-round games are April 16.

When are the state championship games?

All eight games are scheduled for Saturday, May 8.

Jalen Cone is off to become a Lumberjack.

East Forsyth football players listen as officials talk about this season's points of emphasis before a scrimmage last week at Davie County Community Park in Mocksville.

Glenn quarterback Camden Coleman (12) passes on Nov. 8 against West Forsyth in the final week of the 2019 regular season.