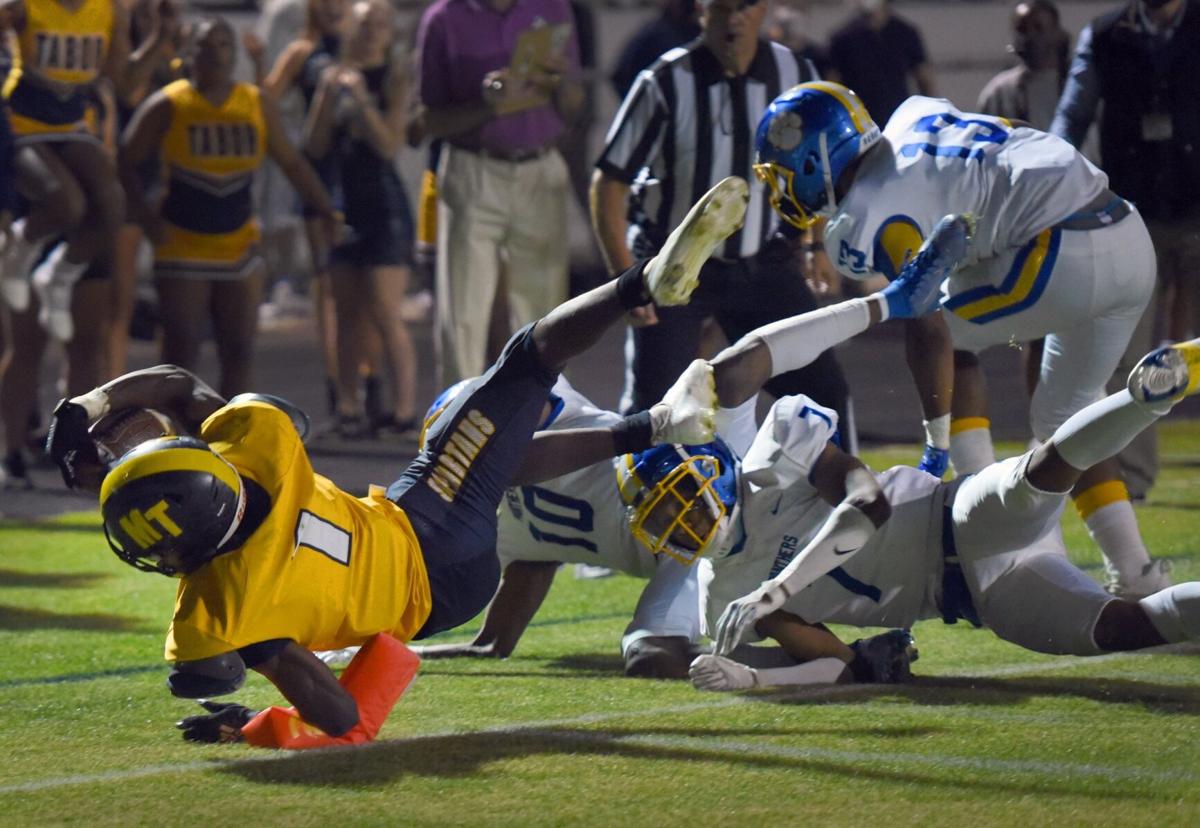 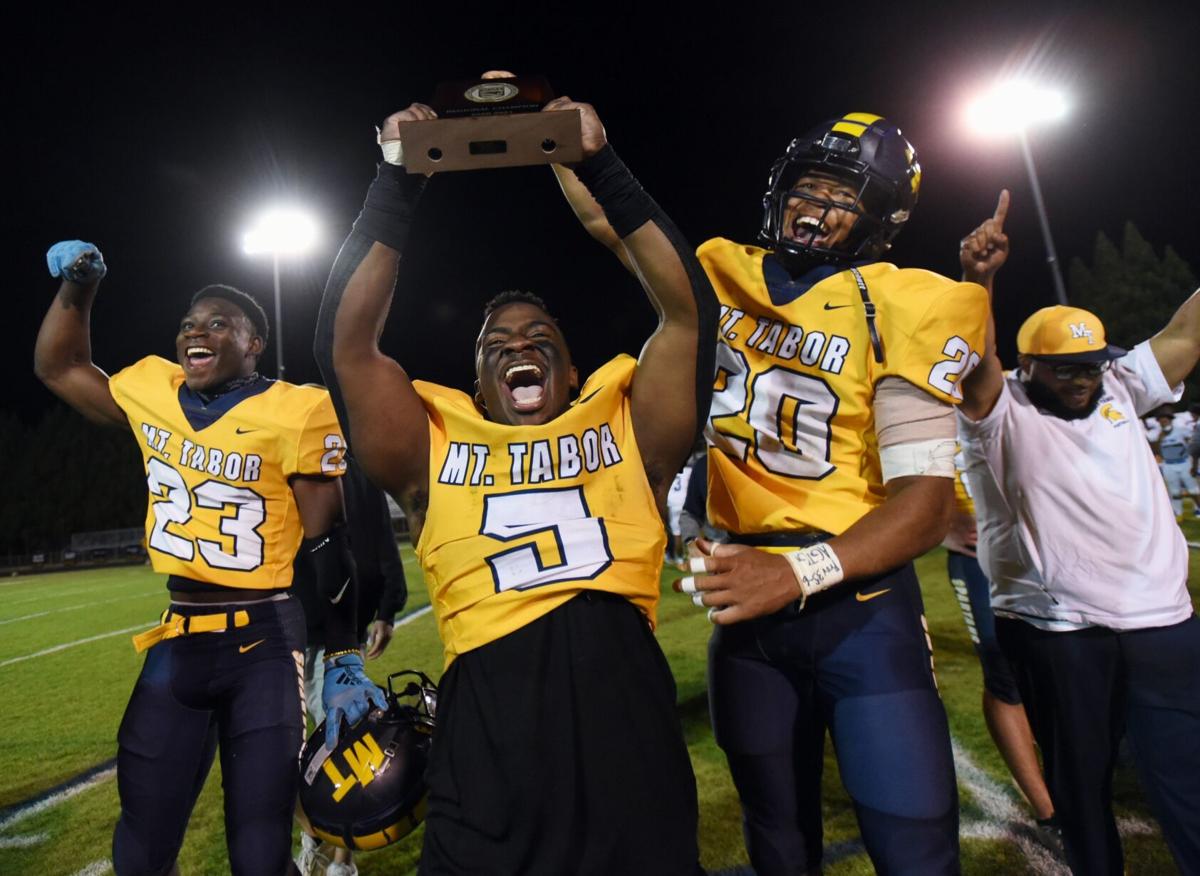 Mount Tabor captains Brian McIntyre (23), Collin Smith (5) and Josiah Bank (20) along with head coach Tiesuan Brown, celebrate with the West Regional trophy after the Spartans’ 24-20 win over Dudley on Friday. 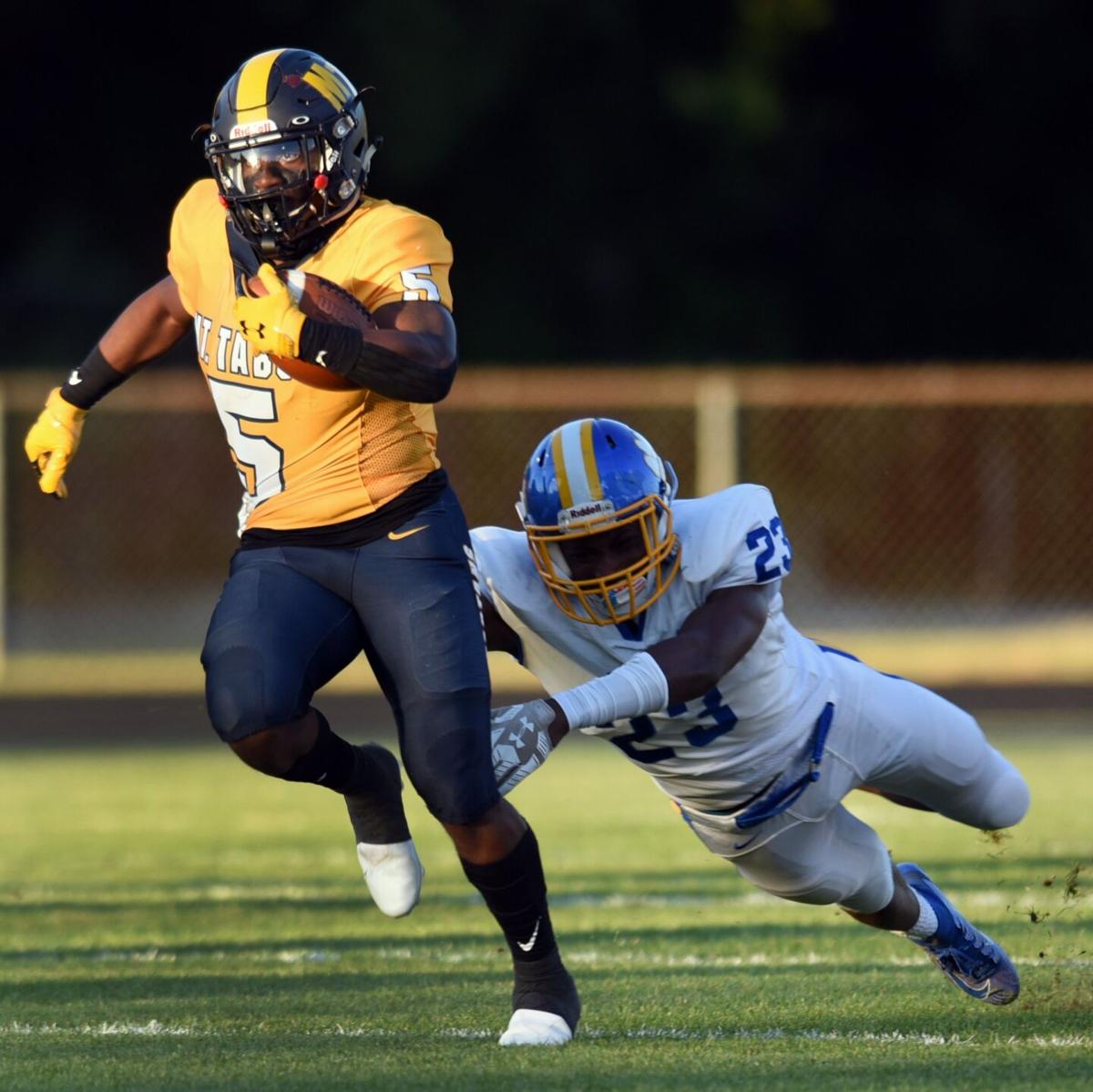 Mount Tabor’s Collin Smith gets past Dudley’s Jahrie Little on a 98-yard kick-off return for a touchdown to start the game. 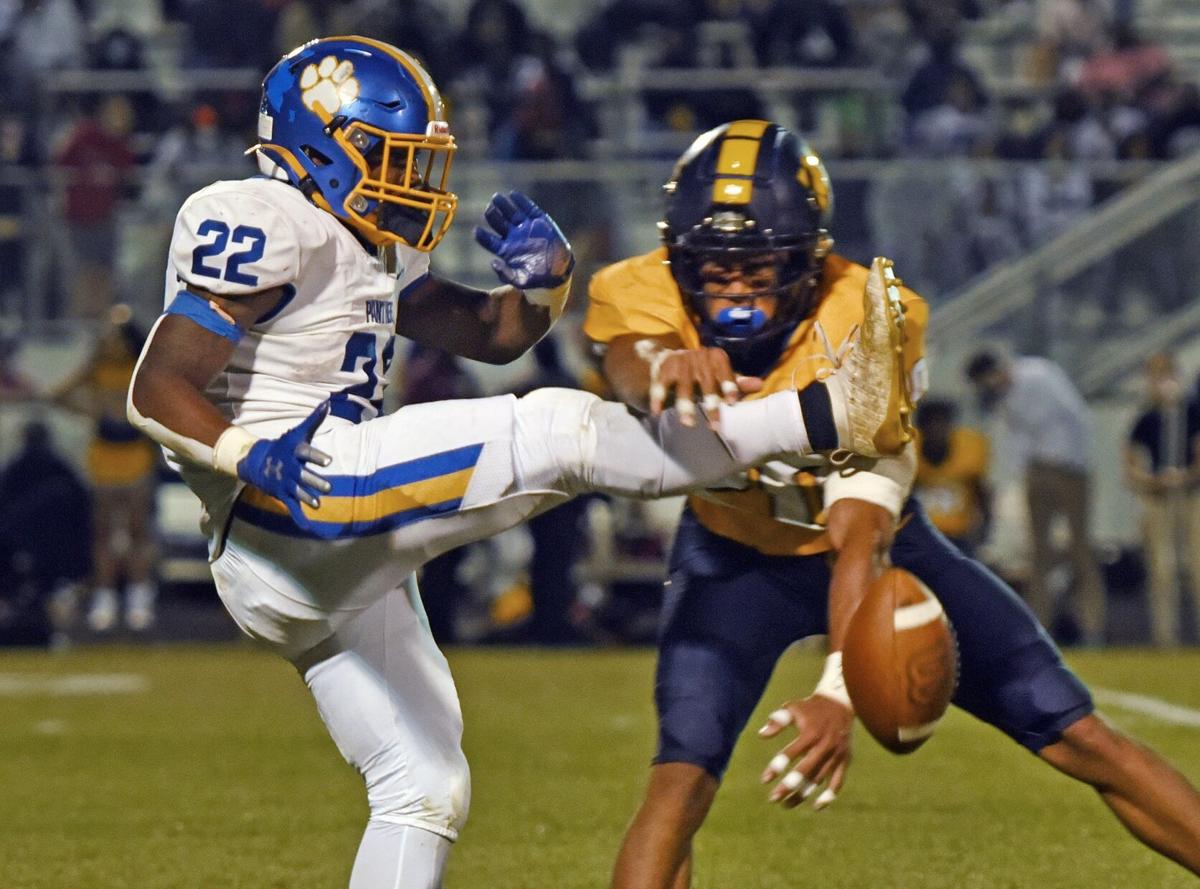 Mount Tabor’s Josiah Banks blocks the punt of Dudley’s Milan Summers at the end of the second quarter.

The legendary Bob Sapp, the grandfather of Mount Tabor’s football tradition, had a front-row seat for the Spartans’ 24-20 win over Dudley on Friday night.

Sapp, 75, had been in the hospital last week and missed the Spartans’ win over Matthews Weddington, the two-time defending state champions. He wasn’t about to miss this one, because now the Spartans will play for that elusive state title on Thursday night against Cleveland.

Thanks to a defense that made the biggest play of the game in the fourth quarter to turn the momentum, Sapp and Mount Tabor fans left with smiles underneath their masks. Linebacker Kobe Perez caused a fumble, stripping running back Mehki Wall, and teammate Josiah Banks was there for the recovery.

A few plays later the Spartans scored the go-ahead touchdown.

“I don’t know what to say, this is so emotional for me,” said Perez, who also plays fullback and was in tears amid the celebration on Bob Sapp Field. “We just wanted this so bad for our school, and now we have a chance to go get a state championship.”

The Spartans’ defense, which at times has carried them this season, finally got to the Panthers in the fourth quarter. On Dudley’s final play on a third-and-10 with 1:37 left linebacker Jamari Slade intercepted quarterback Jahmier Slade to seal the victory.

Spartans coach Tiesuan Brown, who played for Sapp and coached under him for several years, said knowing that Sapp was at the stadium was a big deal.

“If not for Coach Sapp, I’m not here talking to you because I don’t have this job without him,” Brown said. “He means everything to me and this program. He built this thing, and I’m just so glad he was here.

Banks, a senior linebacker, had seven tackles, a blocked punt and Max Uren was in on eight tackles. The Panthers did gain 288 yards but it wasn’t enough after Banks recovered the fumble.

“I’m not sure who stripped it,” Banks said. “I saw the ball and I jumped on and just tried to make a play. Now we get to go play for a state championship.”

Uren, one of the many seniors who has signed to play at N.C. Central, said the Spartans didn’t play as well as they should have.

“Our offense did a good job of keeping us right there,” Uren said. “This was a big-time win and now we get to play for a state championship.”

The Spartans are going to the state championship game for the third time after Sapp guided them in 2003 and Barry Stewart was the head coach in 2007. Both of those appearances ended up in losses.

“This is great for Mount Tabor and great for this community,” Sapp said as he left the stadium as the seconds wound down. “I’m so thrilled for those guys because they’ve worked hard.”

Before the game, Sapp talked about what it meant to have three of his former players on the current staff in Brown, Lamarr Marshall and Brent Jerald.

“I see those coaches out here and it gives me a great feeling to know they are carrying on this tradition,” Sapp said.

When Sapp was reminded that he’s a legend around the program, he bristled. “It’s the players that make you a legend,” he said. “I’m just happy for this current team and what they’ve accomplished.”

Brown said getting to his first state championship game is special, especially with the way they fought from a 20-17 deficit late.

“This is what we talked about since last year,” Brown said. “Getting a chance to get back to the state championship means a lot. They are mentally strong and they scrapped it out and found a way to win.”

Mount Tabor captains Brian McIntyre (23), Collin Smith (5) and Josiah Bank (20) along with head coach Tiesuan Brown, celebrate with the West Regional trophy after the Spartans’ 24-20 win over Dudley on Friday.

Mount Tabor’s Collin Smith gets past Dudley’s Jahrie Little on a 98-yard kick-off return for a touchdown to start the game.

Mount Tabor’s Josiah Banks blocks the punt of Dudley’s Milan Summers at the end of the second quarter.