HIGH POINT — High Point Christian won its season-opening football game Thursday night, but the Cougars lost two games from their schedule today when the school suspended athletics and in-person instruction for two weeks because of positive COVID-19 tests among students.

Scott Bell, High Point Christian’s football coach, said he didn’t know how many students tested positive, but that they were high school students and they were not athletes.

“I can tell you it’s not my football players,” Bell added.

The school will not hold any official athletics practices or contests until at least Oct. 12. That means the Cougars’ scheduled football games Friday night at Charlotte Hickory Grove Christian and Oct. 9 at Arden Christ School are canceled.

“I’m not allowed to coach for two weeks,” Bell said. “Typically, that means no organized workouts with coaches involved.”

The Cougars hope to resume football practice Oct. 12 and play a home game Oct. 16 against Matthews Covenant Day at High Point Athletic Complex. That would leave them with only four days to prepare for their second game of the season.

Bell said he thinks the delayed start to practices and the season because of the COVID-19 pandemic may actually help his team handle the two-week hiatus from official workouts.

“There’s going to be some rust,” the Cougars’ coach said, “but we should be able to pick it back up. It’s a mature group, a motivated group.”

High Point Christian was able to play its football opener Thursday night, beating Indian Trail Metrolina Christian, 40-21, with no fans in attendance as mandated by the N.C. Independent Schools Athletic Association. The Cougars’ players are hoping they get to play again, and soon.

Bell said his daughter, a junior at High Point Christian, told him that during lunch the players usually are smiling and loud in the cafeteria, but when they found out Monday just before lunch that in-person instruction and athletics were going to be suspended “you could hear a pin drop.” Macy Bell told her father that she “looked over at one of the seniors and he had a tear rolling down his cheek.”

Football isn’t the only High Point Christian sport affected by the suspension of in-person instruction and athletics. The Cougars had four varsity cross country meets, four varsity boys soccer matches, three varsity girls tennis matches and three varsity volleyball matches scheduled between today and Oct. 12. It’s not known how many of those, if any, they will be able to make up. 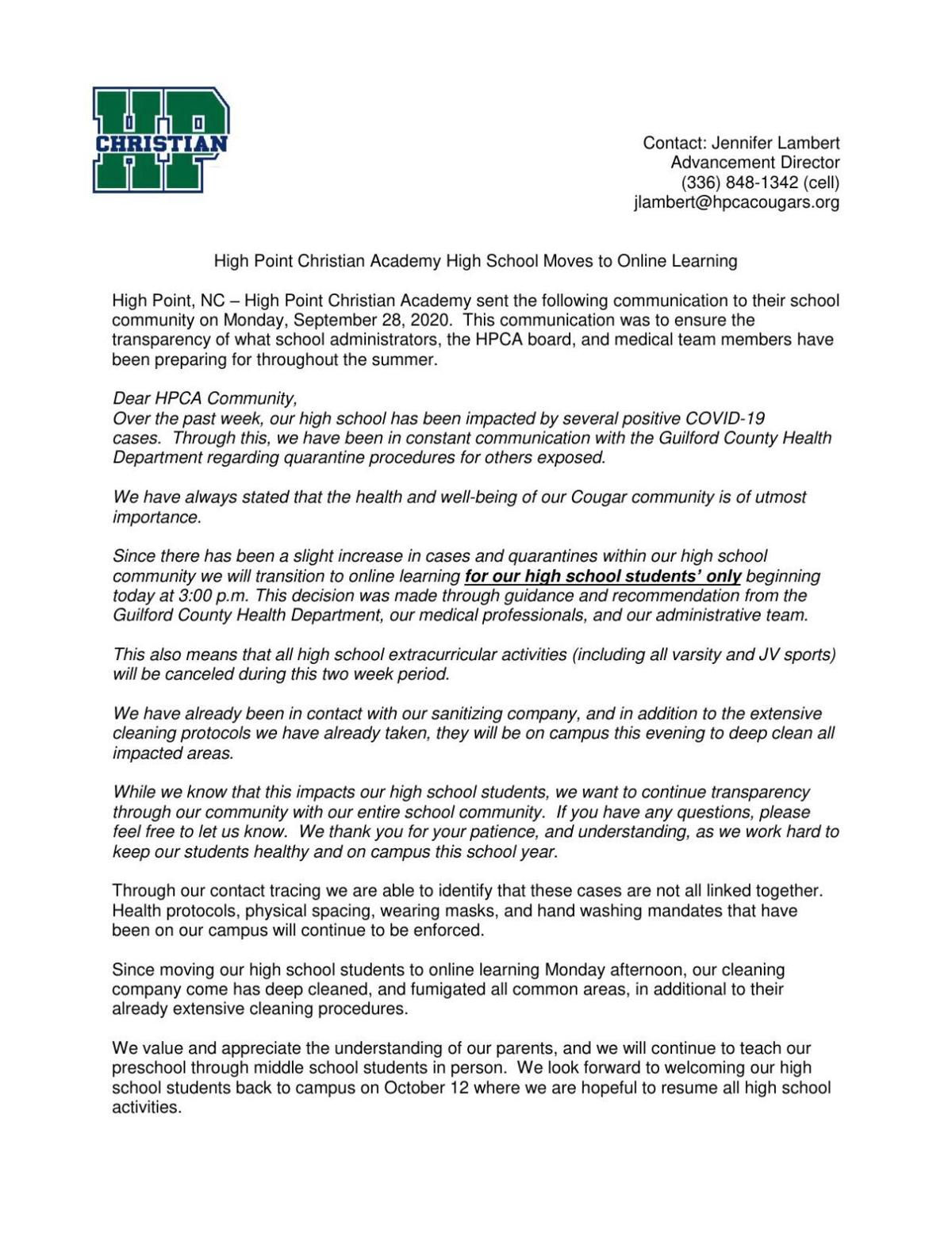