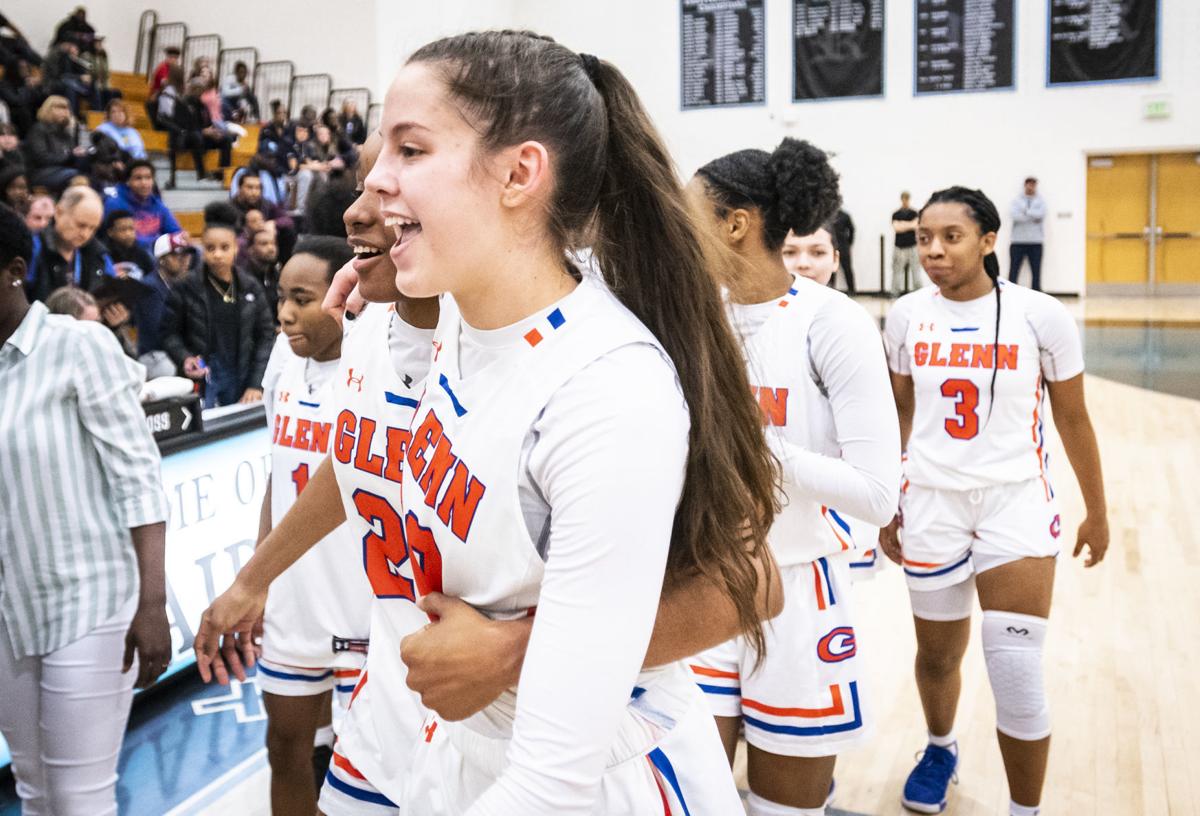 Senior guard Jacee Busick (20) celebrates with her teammates after Glenn defeated East Forsyth to win the Central Piedmont 4-A tournament championship on Friday, Feb. 21 in Pfafftown. 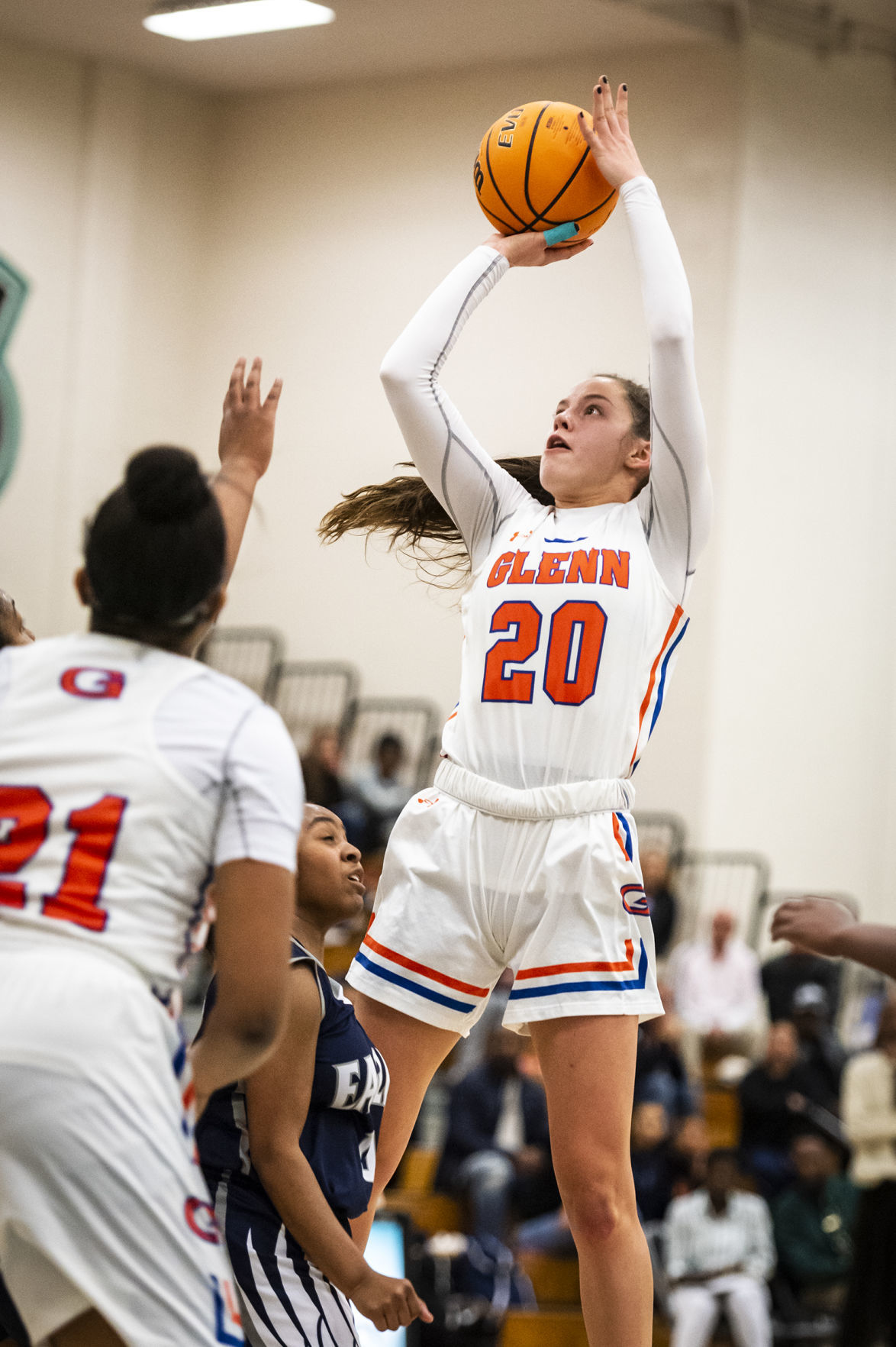 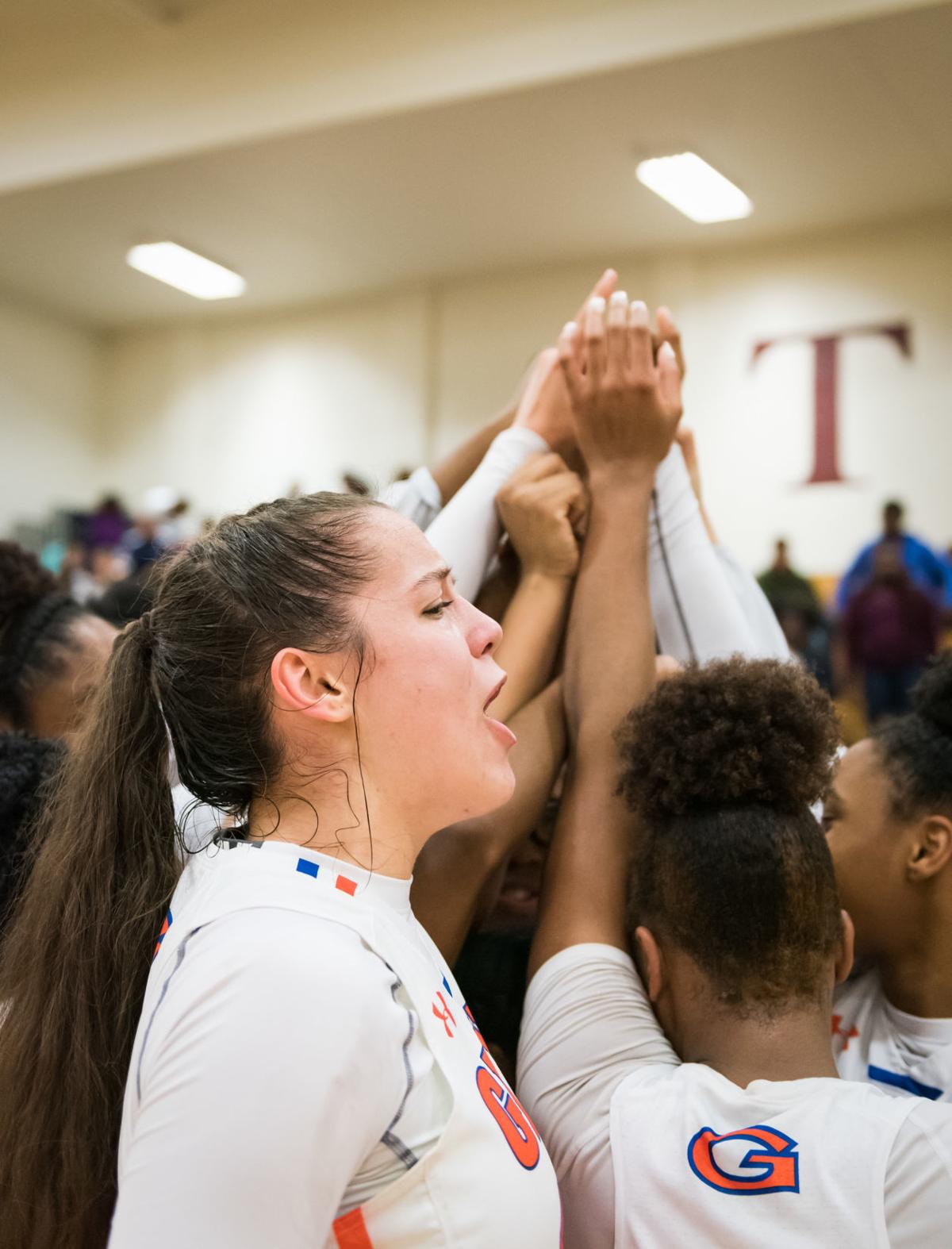 Glenn senior guard Jacee Busick (20) comes together for a huddle with teammates following the Bobcats' 57-49 victory over the East Forsyth Eagles in the Pepsi Bracket final game of the Mary Garber Holiday Tip-Off Classic on Wednesday, Nov. 27, 2019, at Atkins High School in Winston-Salem. 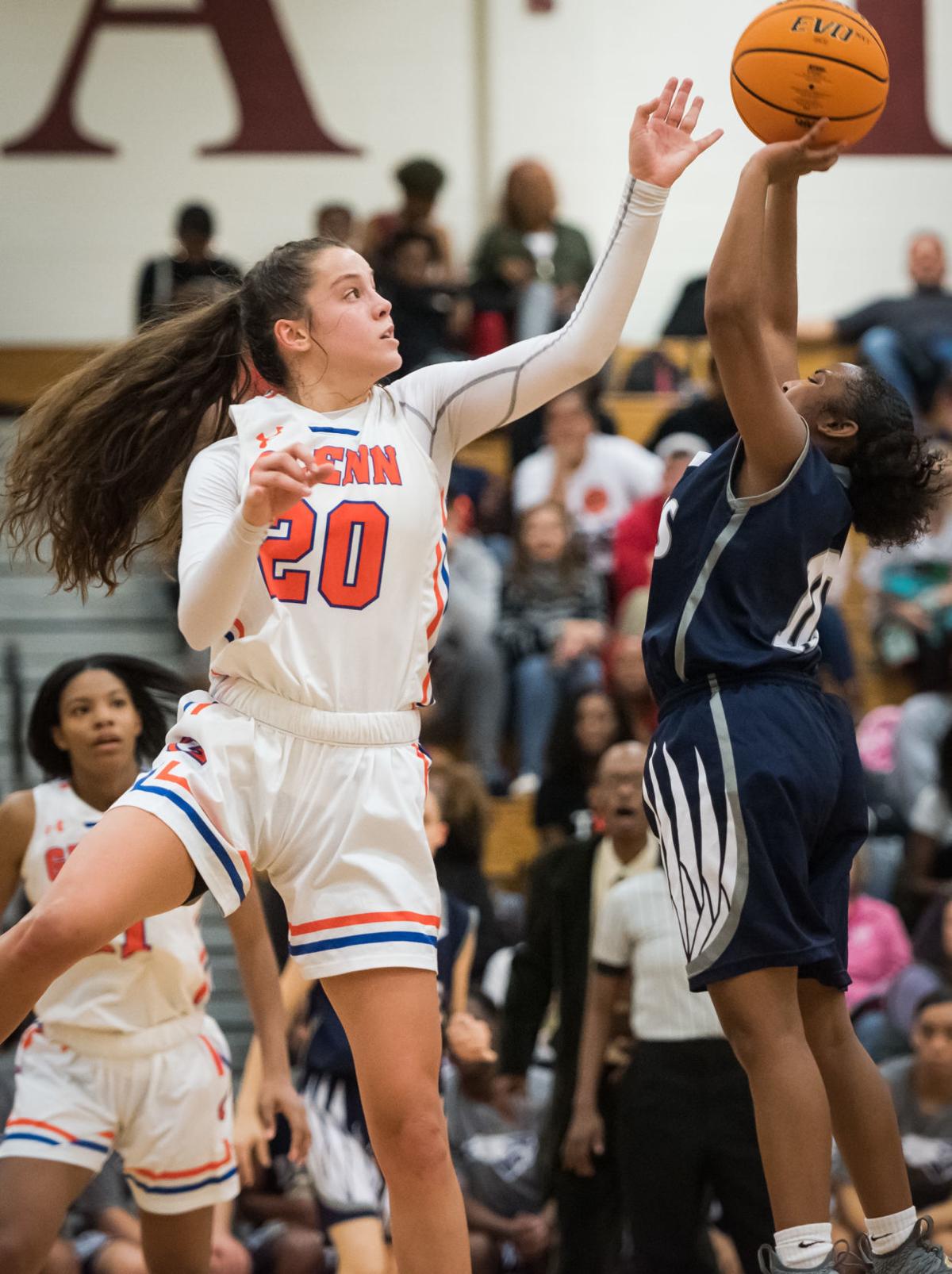 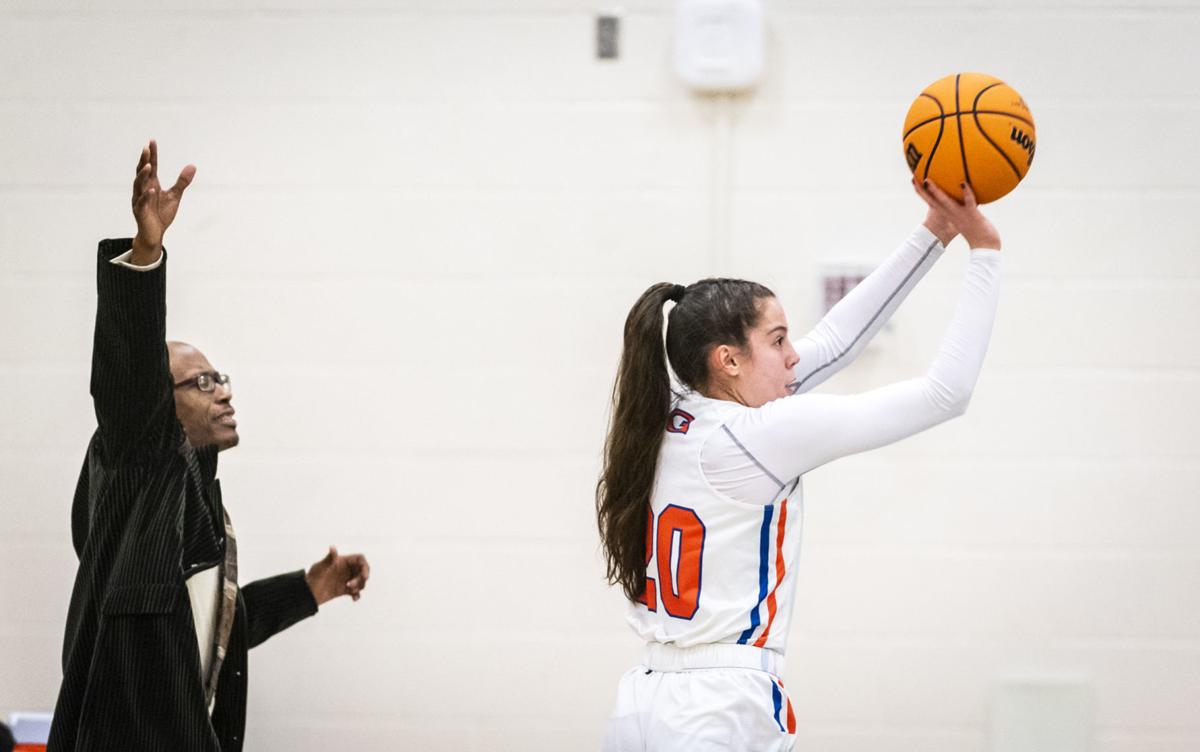 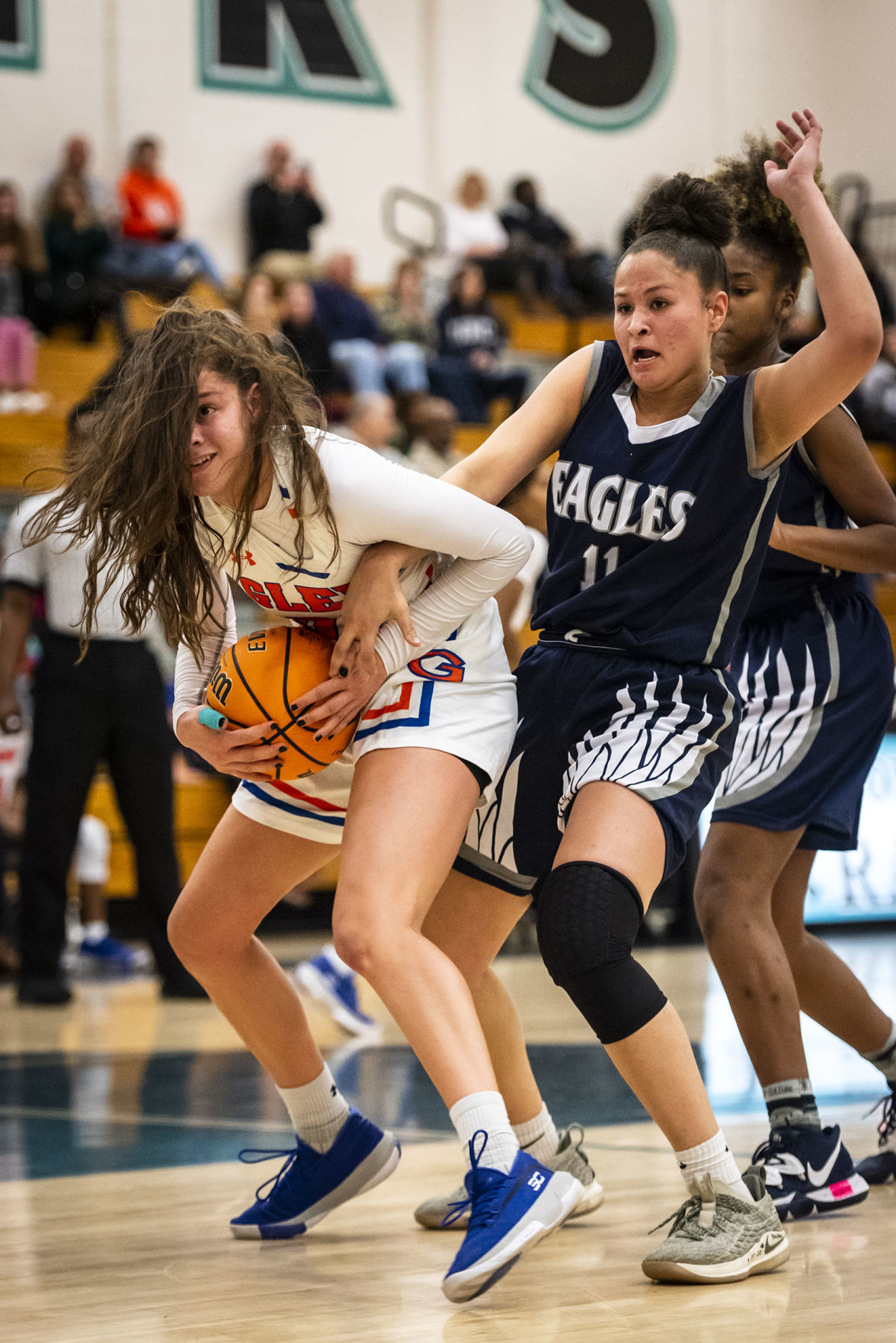 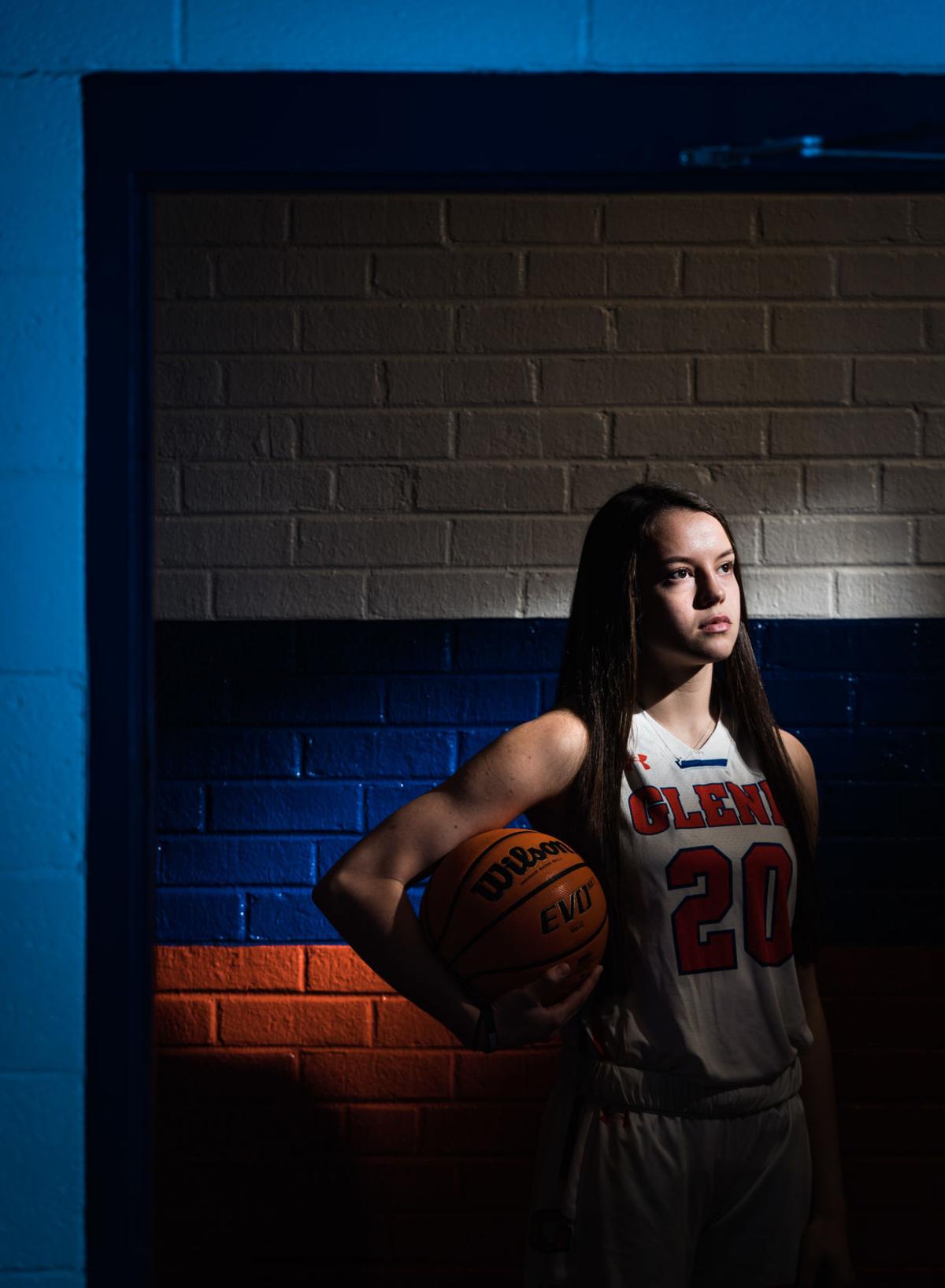 Glenn senior Jacee Busick is one of the area’s top basketball players. Her coach praises her strong work ethic.

Coach Melvin Heggie had a quick narrative to characterize Jacee Busick. He has quite a few examples he can dole out, describing his 6-foot-1 senior wing with the Glenn girls basketball team.

Heggie recalled a three-game exhibition in early November, two weeks before the season began, at Providence Day in Charlotte.

"Before I can even get stuff going, she's got the team stretching, she's got 'em out there for warmups," Heggie said. "You know, she's running the show. That's what this year has been.

"It's been her taking charge of the program, her showing ownership. Her passing down the good habits to everyone else."

That was just the beginning of what formed into a meaningful season for Busick, who paved the way for Glenn to claim a Central Piedmont 4-A title, its first league championship since 1999, as part of a 24-2 season that included a third-round Class 4-A playoffs appearance. The Charlotte signee averaged 19.2 points and 11.3 rebounds, and she has been voted as the Winston-Salem Journal's Mary Garber Award winner as the top girls basketball player in the Northwest.

Those victories were just a few goals unfinished in Busick's previous two Glenn seasons. Her leadership, however, had added significance as well — Heggie even acknowledged every season has included a role change for Busick.

"Coming into this year, I knew that all of my actions would be looked at by all of my teammates," Busick, 17, said. "And I think, kind of how I led the team, would be what I would be leaving for them for the next few years.

"He always kind of told us, you know, 'How we treat our freshman now, that's how they're going to treat their freshmen when they're seniors.' So it was just making sure that I set a good example for everybody — even after I left, the program would still keep going the way it was."

Heggie painted Busick, now a three-time All-Northwest selection, as a "culture-changer," back in January 2019. That transformed from, initially, when she was a sophomore — "a lot more yelling," Heggie said. It grew into dialogue with Busick when she was a junior.

This season, however, appeared to be a hands-off approach for Heggie.

"This year has been more of me not saying much to her at all, and letting her coach her teammates on the floor," Heggie said. "... We may start practice at 4 o'clock, and I really don't need to be in the gym until 4:30 or 4:40 because Jacee's got it — she knows what we're doing. I leave the practice plan in there and, of course, I'm here there most every day. But, if I'm not, she's taking care of it.

"She's been the coach on the floor."

Busick recalled summer 2017 and what she describes as a “leap of faith” to join Heggie's Bobcats.

At the time, Busick lived in Mount Airy and had finished her freshman season in 2016-17 at Surry Central. A move to Kernersville and her choice — transferring to Glenn and becoming an addition to a Glenn girls program coming off a 4-21 record — took some belief.

She was familiar with Heggie from summer 2016 playing with the travel program N.C. Team Xpress. Busick has since transitioned to Team Felton, now on the Adidas Gauntlet circuit, with Heggie.

"Just kind of trusting in Mel, trusting in his vision for what he had for me and the team," Busick said. "Just putting in the work and doing more than he ever asked of me — that was kind of the biggest thing.

"... It's easy to walk into a situation where you don't know anything and to have a hard time trusting someone. But I just, for some reason, I don't know even know why and we talk about this all the time, I just trusted him. And I felt like whatever he was telling me to do was the right thing."

According to Busick, it began with what she called "blind leadership" that sophomore season. She said the team needed to hash out what success would look like, considering the Bobcats had just four victories in 2016-17. Heggie joked he was "just the bus driver" this season, with three seniors at the helm — Jaylyn Gathings, Nakia Weston and Busick.

Busick has kept an open mind heading into the next step of her journey. Expectations are slim — if any — when she enters the women's program at Charlotte under Coach Cara Consuegra. It's comparable to her start at Glenn, which quickly blossomed into a strong resume.

“I’m going into something like a totally new experience which, I mean, I’ve done that before,” said Busick, who verbally committed to the 49ers as a junior in December 2018 after racking up 17 Division I scholarship offers. “It’s just going in and being able to work hard, do whatever the coach asks of me and kind of figuring out the rest as we go.”

Busick said despite the Bobcats' playoff run halting in the third round, it brought closure to a season in which state championship games have been postponed because of the coronavirus outbreak. Busick also was chosen for the Carolinas Classic All-Star Basketball Games in March in Wilmington, but those have been canceled.

So now Busick preps for her impending move to Charlotte.

"I've been going to the park here in Kernersville, since I can't get into any of the gyms," Busick said. "Just running in my neighborhood, trying to stay in shape the best way I can.

"Hopefully whenever I get to Charlotte — hopefully in the summer — I'll be as ready as I can be."

Garber wrote for the Twin City Sentinel and Winston-Salem Journal, hired in 1940 as society editor and moving to cover sports beginning in 1944 when World War II depleted the all-male writing staff. She covered sports through 1997. Garber, who stood 5 feet tall, and the Sentinel had to fight for her seats in press boxes, and she was banned from locker rooms and didn't gain her first access until the 1974 ACC basketball tournament in Greensboro.

Garber is a member of the North Carolina Sports Hall of Fame; the Halls of Fame of the National Sports Media Association and the U.S. Basketball Writers Association; the Mary Garber Award to an ACC athlete and the Mary Garber Pioneer Award to a journalist from the Association for Women in Sports Media are named for her; and Garber received the Red Smith Award from the Associated Press Sports Editors. Garber also served as president of the Football Writers Assocation of America and the Atlantic Coast Sports Writers Association. She died in 2008 at age 92.

MOCKSVILLE — East Forsyth was a rude guest last night, its dominant offense producing 667 yards in an 59-21 rout of host Davie County in a Cen…

Glenn’s defense led the Bobcats to a 33-13 football win in a Central Piedmont 4-A clash Friday night at Reagan.

Senior guard Jacee Busick (20) celebrates with her teammates after Glenn defeated East Forsyth to win the Central Piedmont 4-A tournament championship on Friday, Feb. 21 in Pfafftown.

Glenn senior guard Jacee Busick (20) comes together for a huddle with teammates following the Bobcats' 57-49 victory over the East Forsyth Eagles in the Pepsi Bracket final game of the Mary Garber Holiday Tip-Off Classic on Wednesday, Nov. 27, 2019, at Atkins High School in Winston-Salem.

Glenn senior Jacee Busick is one of the area’s top basketball players. Her coach praises her strong work ethic.