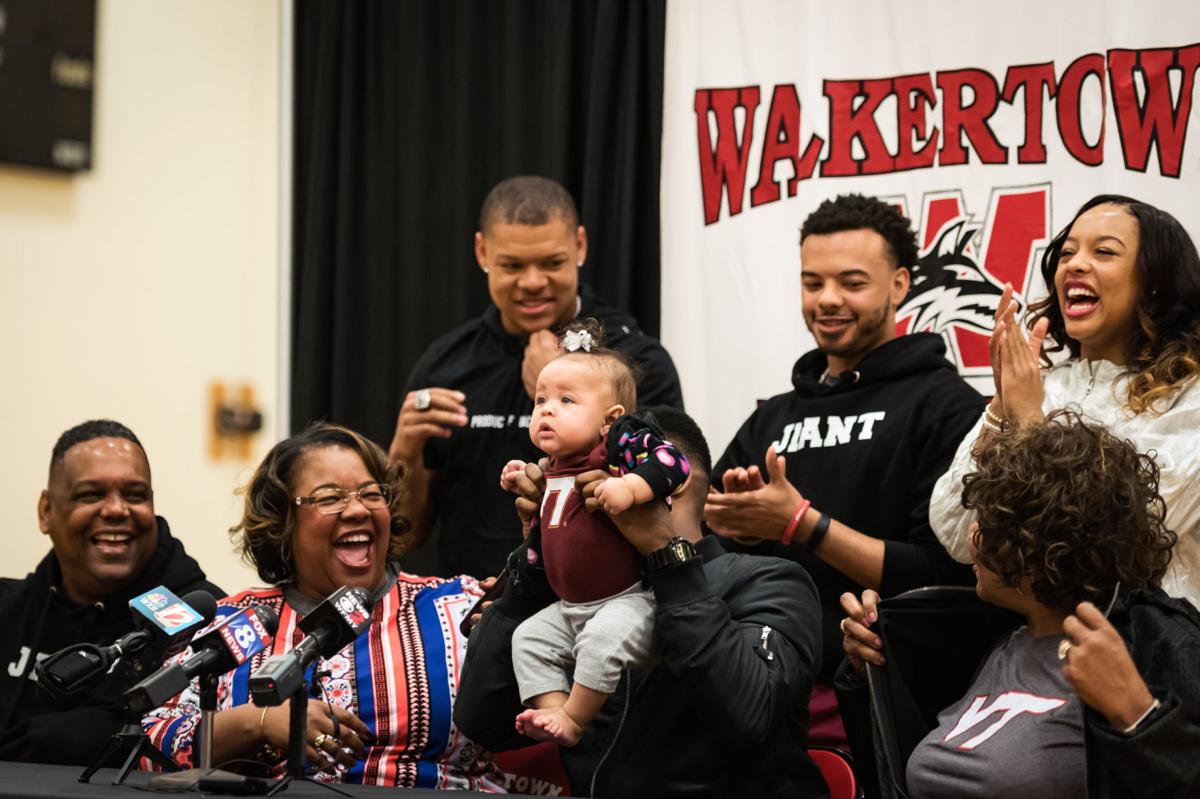 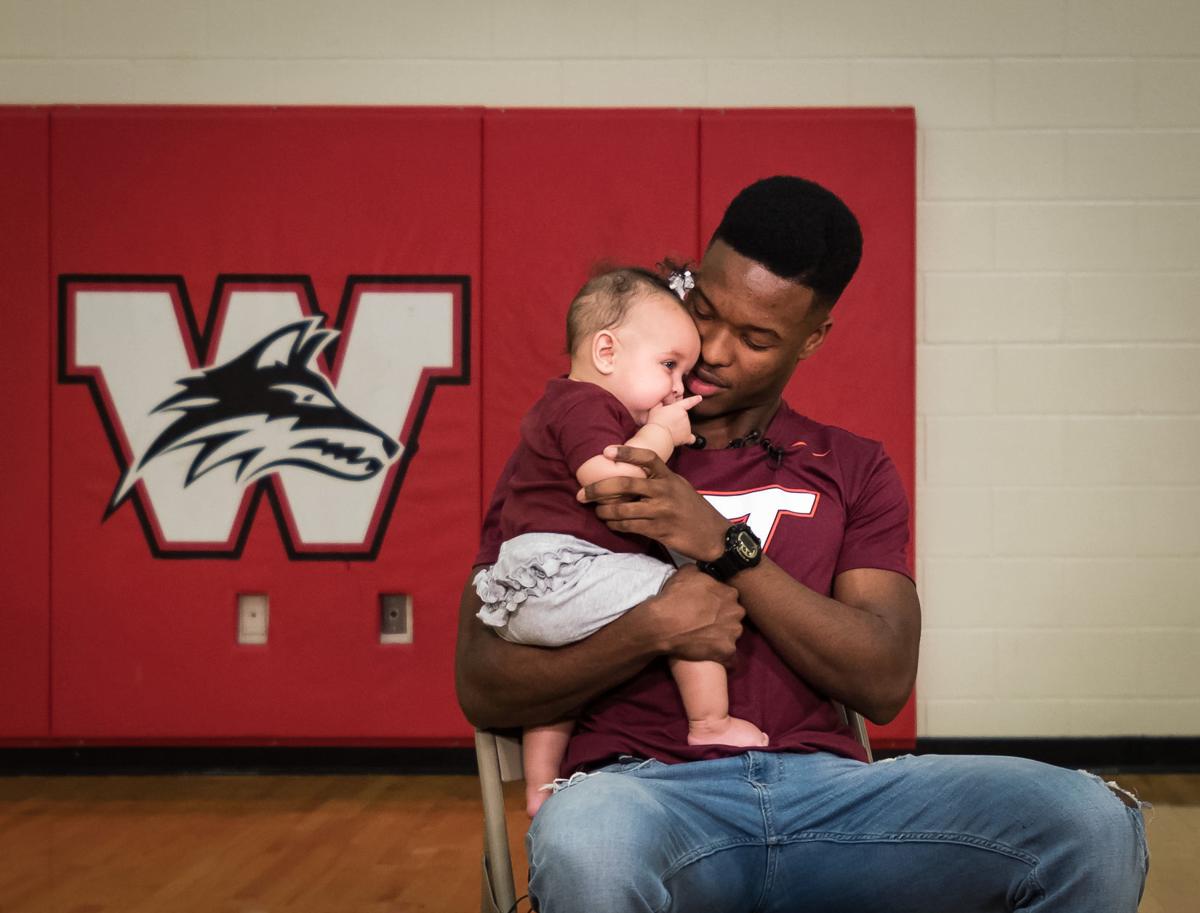 Walkertown junior point guard Jalen Cone holds his six-month-old daughter Ivy Faithe Cone while he answers questions from the media after announcing his verbal commitment to Virginia Tech on Thursday afternoon, May 9, 2019, in Walkertown, N.C. 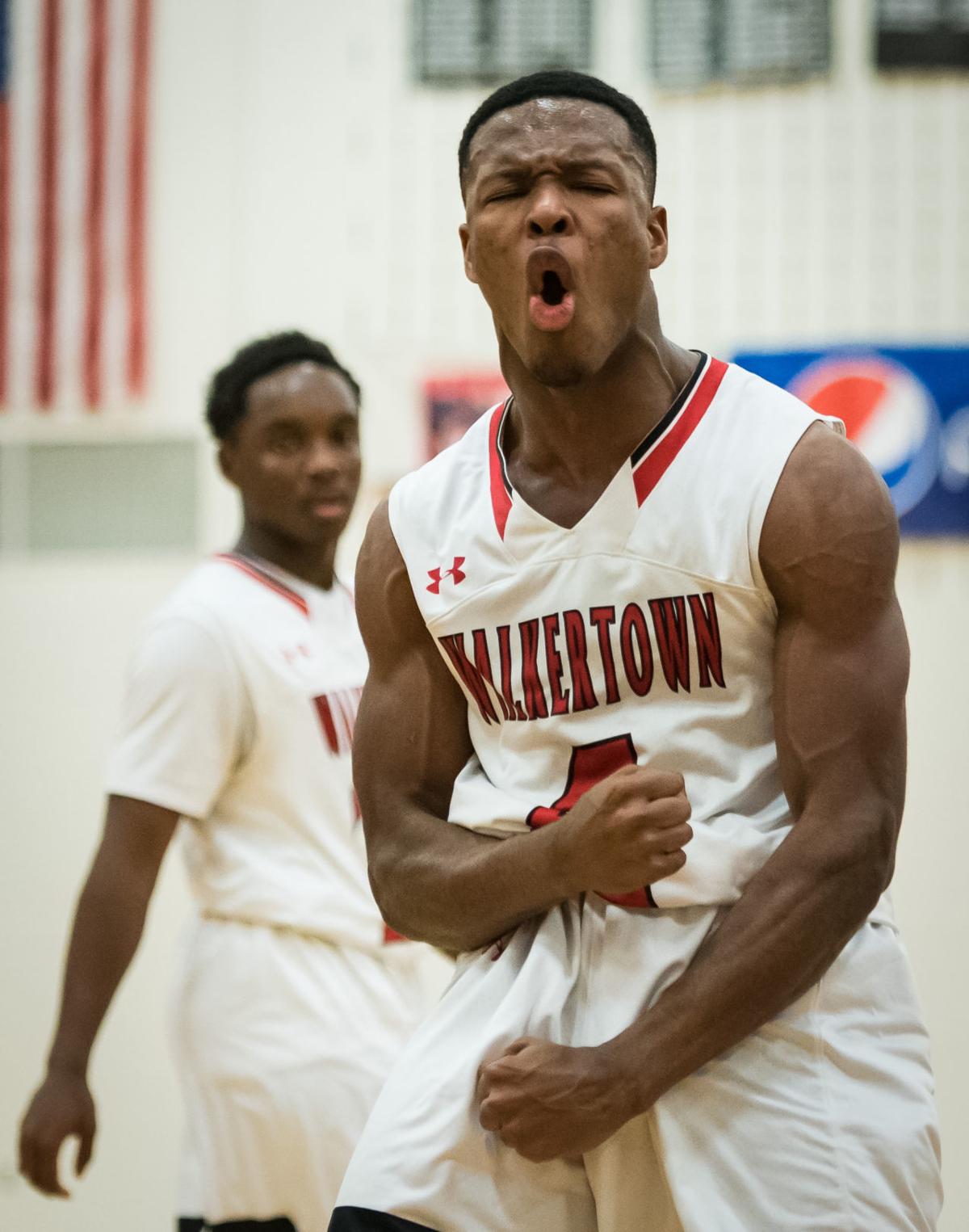 WALKERTOWN — What looked like a gathering of no more than a few dozen on the bleachers of the Walkertown High School gymnasium soon became a large crowd, once the final bell of the day rang on Thursday.

Then came Jalen Cone, his family both in front and trailing. Cone, a 6-foot junior point guard, sat at the center of a table draped with a black cloth affixed with a red and white Walkertown logo.

The crowd, now filling much of the bleachers, became quiet. It was time.

Cone, a 4-star prospect per 247Sports, was about to announce the decision that would put an end to his college basketball recruitment. He had whittled down a list of nearly 20 scholarship offers from Division I and II programs to just six within the SEC and ACC four days earlier. Those top choices had also offered Cone the option to reclassify to the class of 2019.

He was then handed his six-month-old daughter, Ivy Faithe Cone. As she sat in his arms, Cone unbuttoned the front of her outfit to reveal a maroon shirt with a white and burnt orange "VT" emblazoned across the chest. After more than a month of buzz, Cone had chosen Virginia Tech.

The road to this moment — choosing Coach Mike Young's Hokies —  had started a few weeks ago.

PHOTOS: See a gallery of photos from Cone's junior season at Walkertown.

"And Coach Young and his system have Jalen Cone written all over it."

And the thought of reclassifying didn't present itself until about a month ago. Tennessee, led by Coach Rick Barnes, was the first to extend an offer for the class of 2019 in early April.

Six other programs followed suit, including Wake Forest, Virginia Tech, Texas A&M, Boston College and Mississippi. N.C. State was the last to give Cone the option to reclassify. He announced the the offer via Twitter on April 24.

"To be honest, it just really took a turn," Harold Cone, Jalen's father, said after the news conference. "You kind of think, 'OK, I've got a little time,' but then you turn around and it's like, 'Hey, what about this idea?'"

"We knew NBA rules, guys going to the draft, guys putting their names in transfer portals, and I was like, 'Hey, let's look at it.'"

Cone said he would reclassify and forgo his senior season on Sunday night, while also naming his top six choices.

The crowd in the gym appeared to have an inkling — or, at least, a hope — of where Cone would commit. That mix of students, family, friends, and fans included 11-year-old Dani Jo Hearl, an avid Virginia Tech fan, who was holding a sign with photos of the Walkertown standout and a message that read, "Jalen Cone. VT!" Dani Jo and her father, Joey, had traveled from Mount Airy to watch Cone's announcement.

According to Cone, his daughter played a significant role in the decision to choose Virginia Tech.

"I knew I didn't want to go too far and be apart from her, especially in these early stages," said Cone, who took an official visit to Virginia Tech on April 29. "But, if I had to, that most likely would've been the decision because I would've had to make a long-term decision instead of short-term and sacrifice missing out on these next few years of major events and stuff so one day I could provide for her."

If Cone signs with the Hokies, he will become the second area player in the past two years to make the trek to Blacksburg, Va. The first was Isaiah Wilkins, a 6-3 rising sophomore and former standout at Mount Tabor. He spent his first season under former Coach Buzz Williams, who left for Texas A&M in early April.

Cone said no definite date has been set of when he'll sign his national letter of intent.

The day marked an end to Cone's three-year run at Walkertown under Coach Kevin Thompson. As a sophomore, he averaged more than 34 points per game while getting seven scholarship offers that included Wake Forest in September 2018. During the 2018-19 season, he averaged 25.7 points and six rebounds to lead the Wolfpack to a 21-8 finish.

"It's a huge loss (for the program)," Thompson said. "But at the same time, I'm excited because now we'll have more kids that can come in and step up.

"This, for me, is a selling point because I think all kids now can understand it doesn't necessarily matter where you go, you just have to put in the work."

Walkertown junior point guard Jalen Cone holds his six-month-old daughter Ivy Faithe Cone while he answers questions from the media after announcing his verbal commitment to Virginia Tech on Thursday afternoon, May 9, 2019, in Walkertown, N.C.