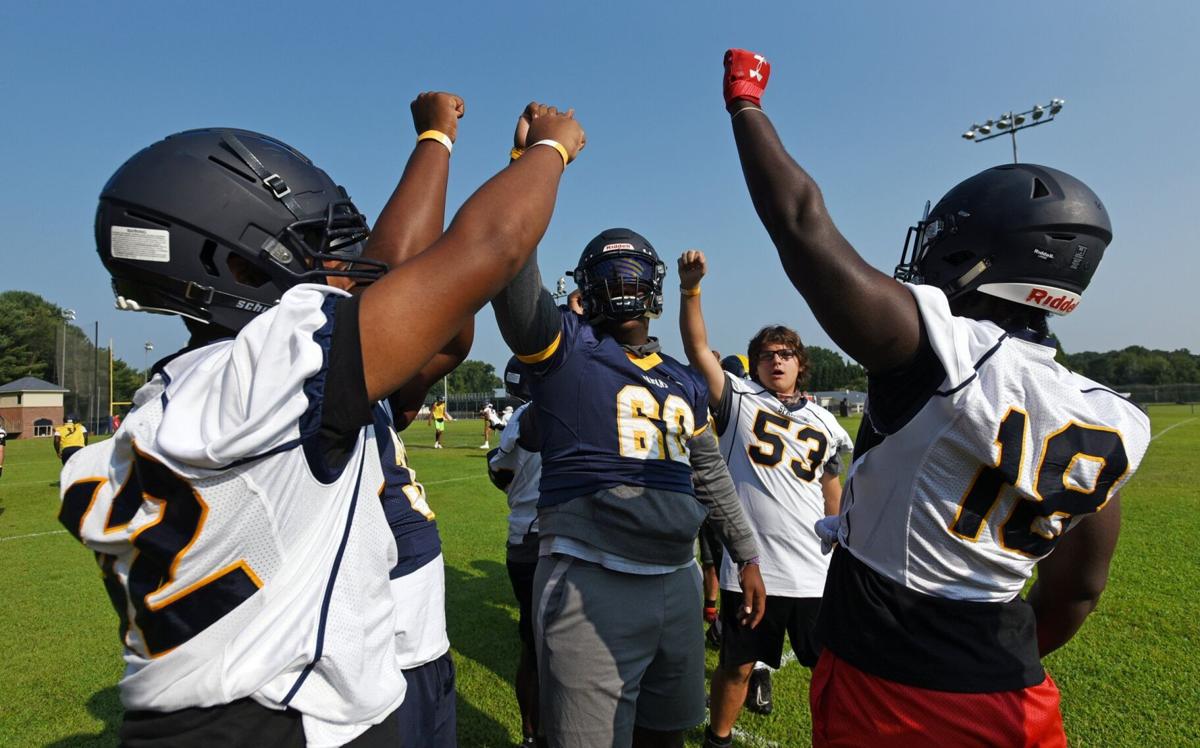 Mount Tabor’s Deshawn Watson (center) brings his teammates together for a quick word between drills. Watson is one of several senior leaders the Spartans will count on this season. 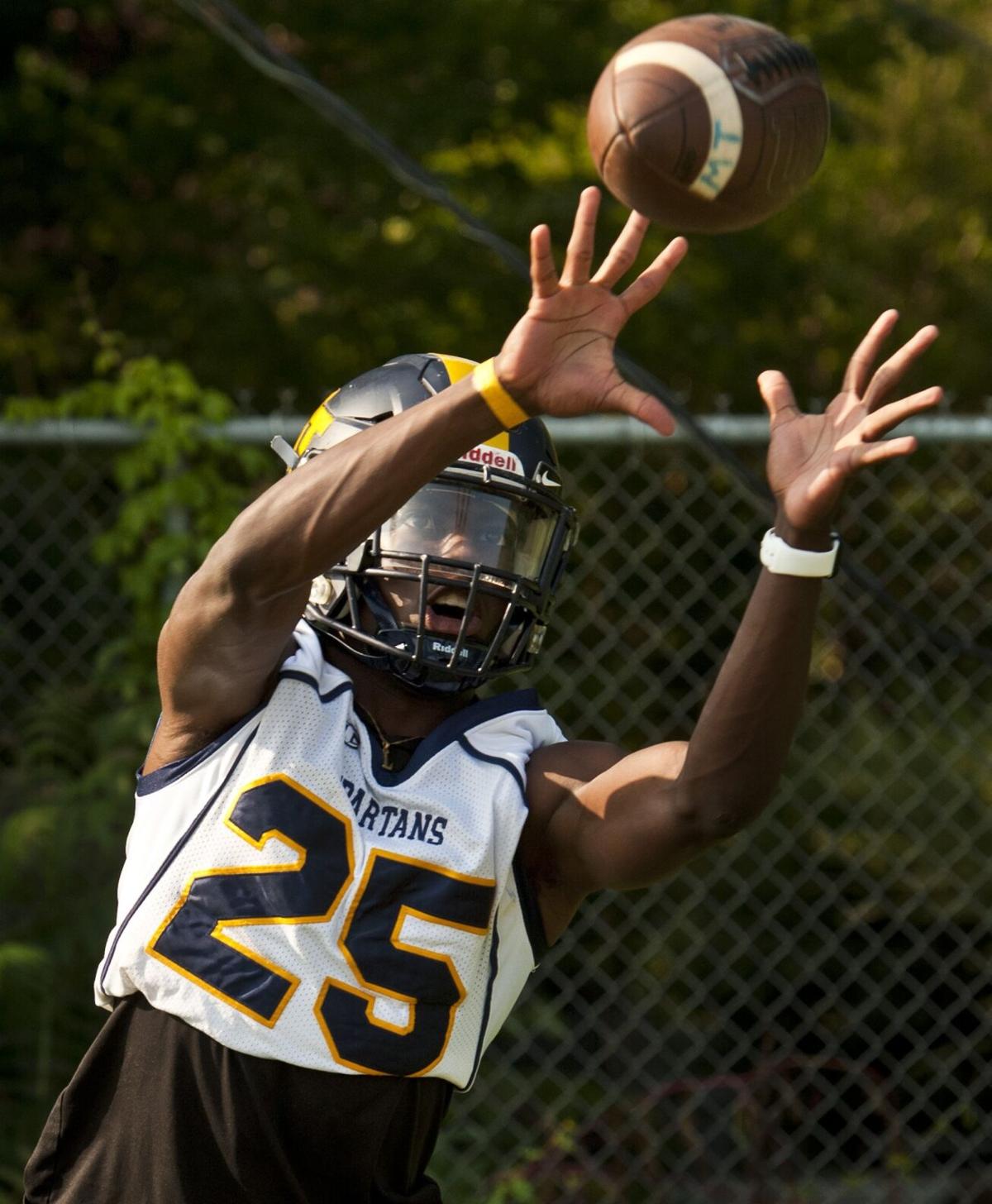 Wide receiver Lance Patterson, the MVP of the Class 3-A state championship win in May, says the Spartans have “a lot of talent around here, and our plan is to not miss a beat.”

Mount Tabor’s reward for winning its first Class 3-A NCHSAA state championship in football isn’t much of a reward at all.

As the Spartans hit the practice field for the first time on Monday morning, the talk wasn’t about what they accomplished 89 days ago in winning the school’s first state title. The talk was about what’s ahead in realignment with Mount Tabor joining the rugged Central Piedmont 4-A Conference.

“We can take it,” wide receiver Lance Patterson said about the jump up after four years in 3-A. “We’ve got a lot of talent around here, and our plan is to not miss a beat. We’re ready to play with the big dogs (in 4-A) and we’ll step up for to challenge.”

Patterson, the MVP of the Spartans’ 24-16 win over Cleveland on May 5 in the state championship game, brings a lot of speed and experience to the offense.

Coach Tiesuan Brown, equipped with a new hip after replacement surgery soon after the state championship, had a bounce in his step as practice began. The bounce wasn’t just about his new hip, but more about what’s ahead.

“That season’s over,” Brown said about going 11-0 in the spring. “Unfortunately, we didn’t get a lot of time to really enjoy it, but the Mount Tabor community and the administration did a great job of celebrating it.”

A parade honored the team, and the championship rings are on order and should arrive this month, but the reality is 17 seniors graduated and the core of that is team playing in college this fall.

“We lost 17 seniors and 13 of them are playing in college,” Brown said. “So once the rings come we are going to hold off on the ceremony because a lot of those graduating seniors will be busy in college. It’s a good problem to have.”

The Spartans welcomed 105 players for the JV and varsity teams on Monday morning. Brown says he likes where the numbers are and likes the line depth.

Deshawn Watson, a 6-foot-3, 270-pound senior, excelled on the offensive line last season. In the state championship game, however, he was pressed into duty on the defensive line and made six tackles.

“The juniors that are now seniors such as myself have to take on the challenge of being leaders,” Watson said. “We are up for that challenge and know what’s ahead.”

What’s ahead is butting heads in conference play with East Forsyth, West Forsyth, Reagan, Glenn, Davie County and others. In the past four seasons the Spartans have played those schools in non-conference games, so Brown knows what it will take.

“It’s a Forsyth County thing,” Brown said. “We’ve got great coaches in this league, and the thing about the CPC is there are great programs. Each and every year all of those teams will put a good product on the field.”

“The good thing is we know everybody so well in the CPC, but it’s a little different from the conference we left, but we’re looking forward to it,” Brown said. “Our guys coming back know what it feels like to be the 3-A state champion, so that’s going to help.”

Patterson, who was considered the fastest player for the Spartans this spring, says he’s still the fastest. Brown, however, says he’ll have some competition.

“I’m not sure Lance will be the fastest,” Brown said as he glanced toward his star wide receiver. “We’ve got some guys who didn’t play a lot last year who want to get out there on the field and show out. We’re looking for some great competition in practice.”

A former player guides the Spartans to their first NCHSAA state football championship with a 24-16 victory over Cleveland.

A gallery of images from Mount Tabor's 24-16 victory over Cleveland in the Class 3-AA football state championship game.

Mount Tabor has claimed its first state championship in football, winning the Class 3-AA title with a 24-16 victory over Cleveland on Thursday…

Lance Patterson, Mount Tabor's MVP: 'We had to do our thing and make history'

To put it mildly, Lance Patterson had himself a ballgame.

Mount Tabor defense might lack a nickname, but it doesn't lack talent as it goes for school's first state championship

The Spartans will play for state championship on Thursday night in Chapel Hill against Cleveland High School.

Mount Tabor is in a NCHSAA state championship football game for the first time since 2007 and the Spartans (10-0) are seeking their first title.

The Spartans, after dispatching Dudley, will face Cleveland, from Johnston County.

Mount Tabor will play Cleveland for the state championship.

Brothers In Arms: McIntyre family has had big influence on Mount Tabor's success on offense this season

Quarterback Tyress McIntyre and his brother, B.J., who is the starting running back, make the Spartans go.

The Spartans advance with a 21-10 victory.

MOCKSVILLE — East Forsyth was a rude guest last night, its dominant offense producing 667 yards in an 59-21 rout of host Davie County in a Cen…

Glenn’s defense led the Bobcats to a 33-13 football win in a Central Piedmont 4-A clash Friday night at Reagan.

Mount Tabor’s Deshawn Watson (center) brings his teammates together for a quick word between drills. Watson is one of several senior leaders the Spartans will count on this season.

Wide receiver Lance Patterson, the MVP of the Class 3-A state championship win in May, says the Spartans have “a lot of talent around here, and our plan is to not miss a beat.”