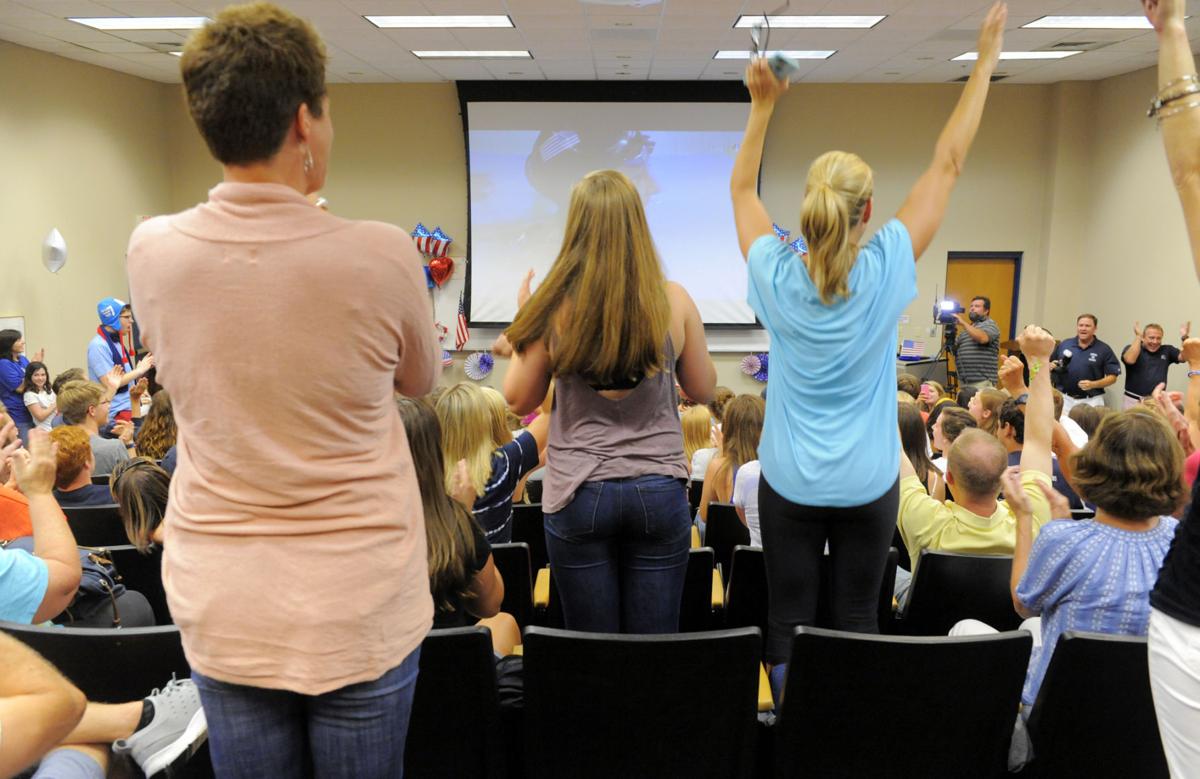 Susan Reid (left), Emma Burke, Andrea Howell, and others cheer for as Kathleen Baker at her former school, Forsyth Country Day, during an Olympic watch party. Baker won the silver medal in the 2016 Rio Olympics. 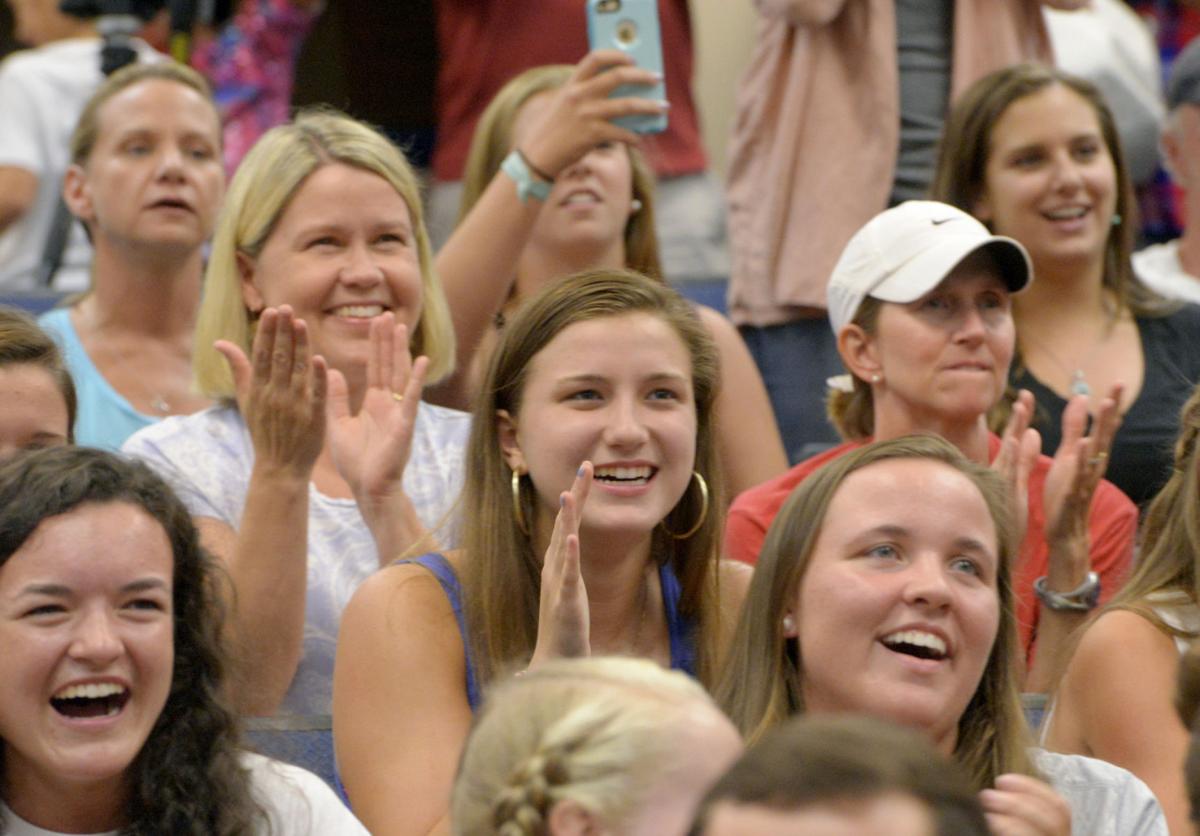 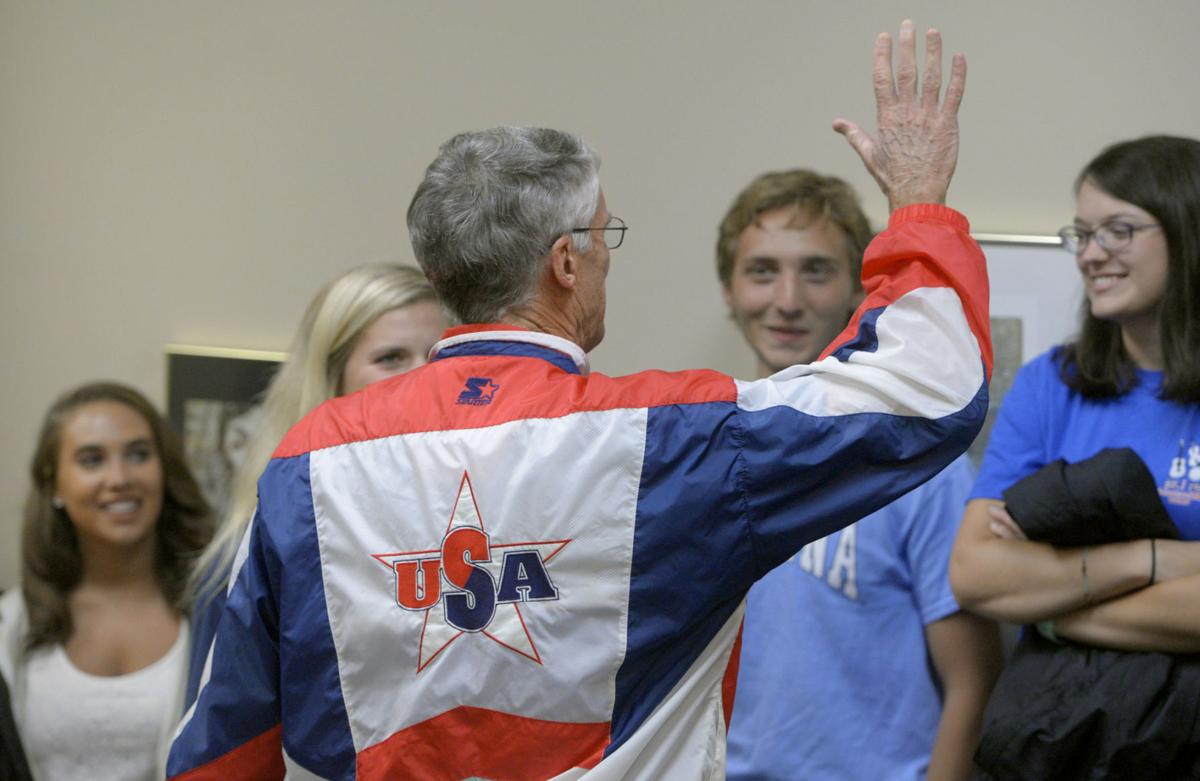 LEWISVILLE — With approximately 150 of her biggest supporters emphatically cheering her on at a viewing party on the campus of Forsyth Country Day School, Winston-Salem native Kathleen Baker won the silver medal in the 100 meter backstroke Monday night at the 2016 Olympic Games in Rio de Janeiro.

Only 19 years old, Baker finished second in the event with a personal-best time of 58.75 seconds, just three-tenths of a second behind 27-year old gold medalist Katinka Hosszu of Hungary.

Baker attended Forsyth Country Day until the age of 14, when she left her hometown and moved to Charlotte in order to train with elite teammates and coaches at SwimMAC Carolina, in hopes of one day competing in the Olympics.

Five years later, Forsyth Country Day athletic director Chris Turner couldn’t think of a better way to celebrate Baker and her accomplishments than by opening the Lecture Hall at FCD, providing food and drinks while some of Baker’s loudest fans gathered around to watch her swim the biggest meet of her young life.

“Kathleen and her family have been such a big part of the Forsyth Country Day community, having gone here for lower school and then her dad being lower school director that we really wanted to do anything we could to support her.

“So many of us that have been here really knew this was coming, because even when she was going through the youth system and swimming for our team at a young age, you just knew she was something special.”

Current FCD swimmer Carrie Semke said it almost felt surreal watching Baker compete in the Olympics, realizing that she is a member of the same swim team and walking the same hallways that Baker was just five years ago.

“It’s just amazing and it’s just such an honor to be able to swim for the same program as Kathleen,” Semke said. “We’re just so happy for her and she is just representing our school so well.”

John Danforth, who coached and taught at FCD for 44 years before retiring in 2014, said Baker deserved all the recognition and accolades she is currently receiving for her accomplishments.

“Kathleen has always put herself in the right position, with the help of her teachers here, her parents, her sister,” Danforth said. “Her support system has always been so strong, but she is ultimately the one doing all the work.

“Swimming requires so much dedication and she has improved so much throughout the years. She surprised everyone with her personal best time in the final, which is the greatest thing, and made all of us so proud by winning the silver medal tonight.”

Baker is the second Forsyth Country Day athlete to compete in the Olympics, according to Danforth, joining Blake Russell, who ran in the Women’s Marathon at the 2008 Olympic Games in Beijing and finished as the top American in 27th place.

Olympian Kathleen Baker through the years

Kathleen Baker, a native of Winston-Salem, will compete tonight for a gold medal in the Olympic swimming 100-meter backstroke.

No. 19: Phelps adds another Olympic gold with dazzling relay

RIO DE JANEIRO — Michael Phelps has to clear out more space in his medal case.

Baker leads way in 100 back

Iron Lady is back in the pool.

Where it all begins: For area swimmers, it all starts with summer league

Kathleen Baker is going to need a few days to get used to the title that will likely follow her around for the rest of her life, “Olympian Kat…

The hometown girl did well for herself Tuesday night.

Kathleen Baker of Winston-Salem was named to the U.S. roster for the short-course swimming world championships scheduled Dec. 3-7 in Doha, Qatar.

Baker to gain taste of the big time in Australia

CHARLOTTE — Kathleen Baker, 17, is the youngest of eight swimmers from Charlotte’s SwimMAC Carolina club who will compete next week in Austral…

Susan Reid (left), Emma Burke, Andrea Howell, and others cheer for as Kathleen Baker at her former school, Forsyth Country Day, during an Olympic watch party. Baker won the silver medal in the 2016 Rio Olympics.