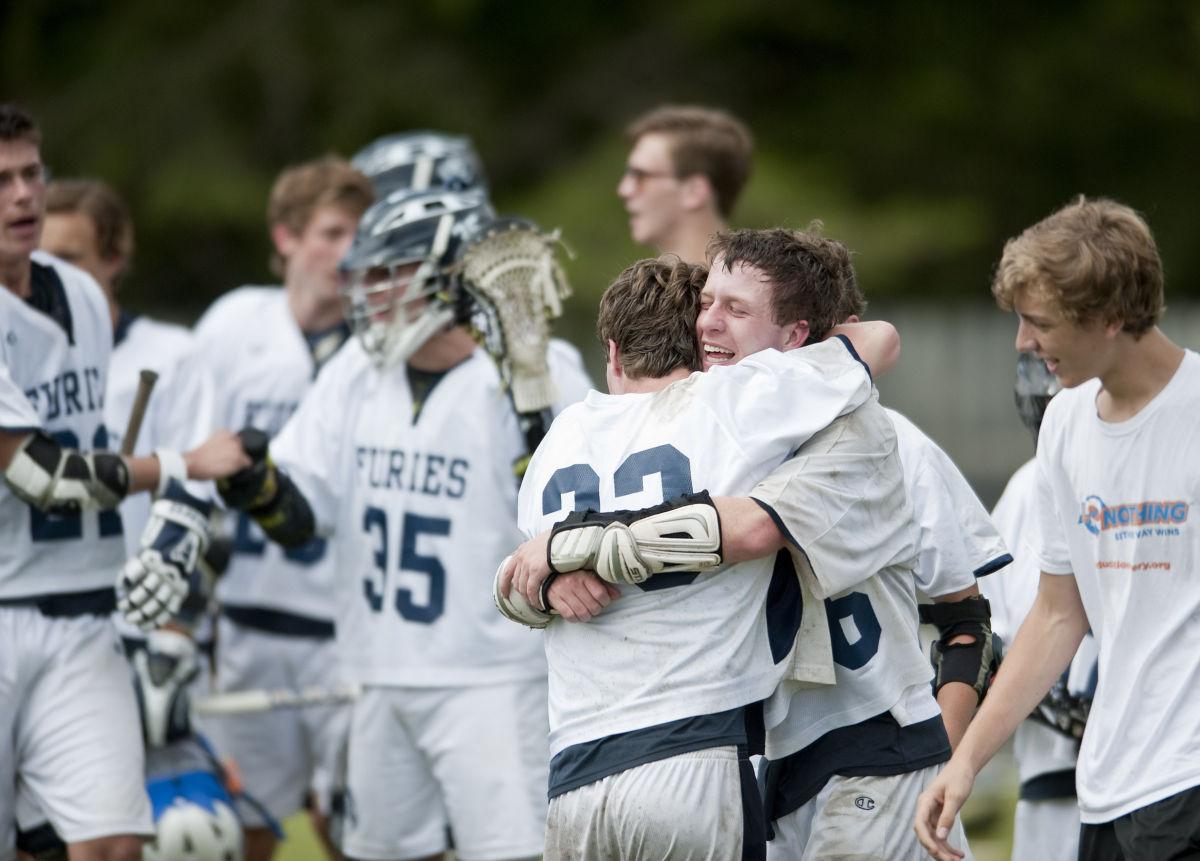 Ben Burnett of FCD (background) hugs teammate Owen Baughan after winning the NCISSA Division II Championship lacrosse game May 21. After a rough start, the Furies players forged a bond and were able to use that to make a run at the school’s first boys’ lacrosse state championship. 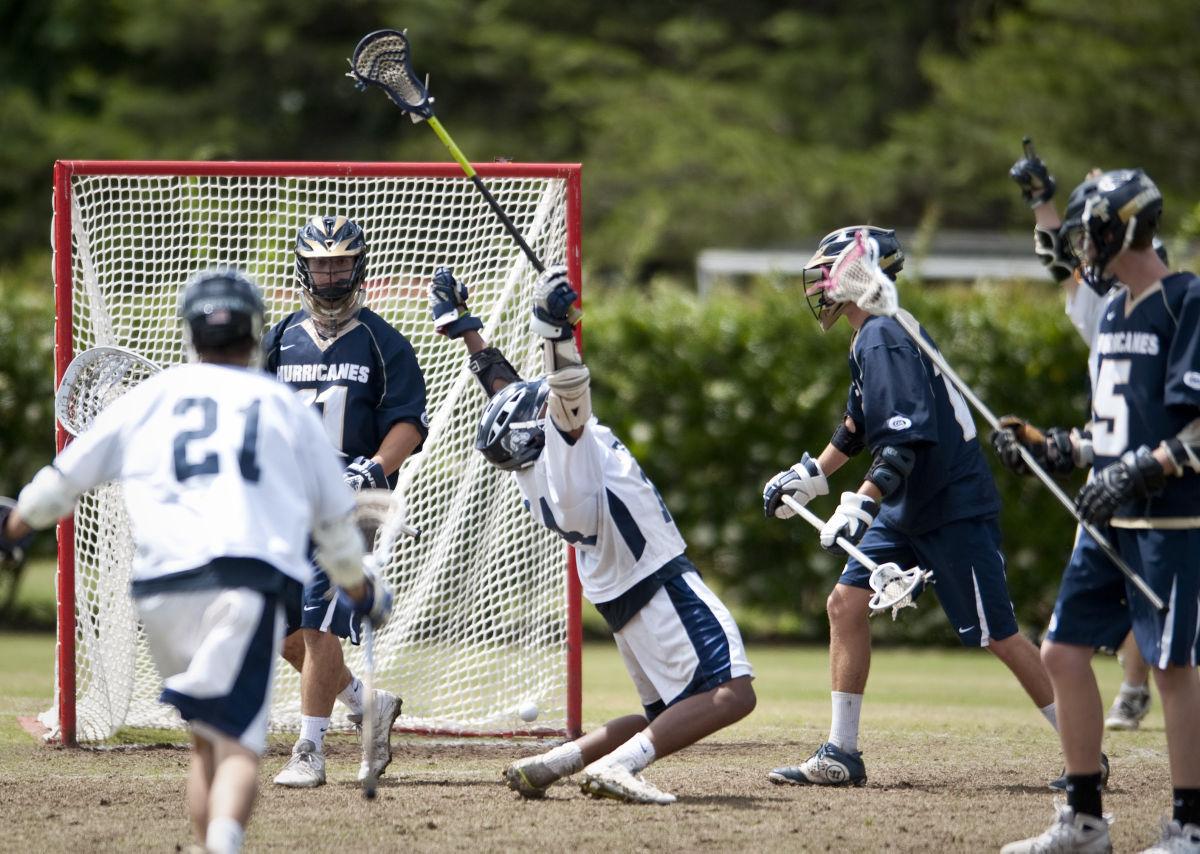 Forsyth Country Day senior Jonathan Winbush, a two-time All-PACIS pick, is a strong contender to make the NCISAA Division II All-State team for the second year in a row.

“Honestly, I just kind of ran.”

That’s how Ben Burnett described the moment of elation after the junior scored the goal that lifted Forsyth Country Day to a 13-12 come-from-behind victory over Cape Fear Academy in the NCISAA Division II championship game.

“I think everybody was just gassed,” Burnett said. “... It was almost like we were passing around the ball trying to just recover enough to get that final push.”

The Furies set up a play called “Moose,” but Cape Fear’s defense countered well and Burnett was forced to improvise.

There were only about 10 seconds remaining when Burnett noticed a Cape Fear defender playing too far out of position to cover his teammate Daniel Gray.

The game-winning moment doesn’t happen without the group of players being more than a team, but a brotherhood.

And so when Burnett scored the decisive goal, he didn’t know quite where to run or who to embrace.

“It wasn’t like I ran to one specific person,” Burnett said. “Everybody on that team is, like, best friends, so it wasn’t like there was just one person to run to.”

At the urging of Baughan and Verwoerdt, the team’s senior captains, brotherhood became a kind of mantra.

“All the guys, they’re very close,” coach Marc Winbush said. “I knew they had a very good work ethic, and I thought this was a great time for us to really surge ahead and try to win.”

That brotherhood was the same thing seen also seen by his son, All-State forward Jonathan Winbush.

“We’ve just been playing together back since middle school, and then now with a good portion of our team being seniors and juniors, this was the time to bring that group together and really go for that state championship,” he said.

FCD routinely took on the top private schools in the state. Coming from a small school, the Furies were outnumbered in virtually every game. Marc Winbush said 20 players were on his team’s roster, but usually only 14 or 15 played in a game.

“I think our guys had to learn early that, you know, we come off the bus and see someone or they come out of our locker room to come on our field, we don’t really care how many numbers you have there,” he said. “When it comes down to play, there’s 10 guys on the field that are your opponents.”

Burnett said that the team’s lack of subs only enhanced the bond among players.

The Furies proved that brotherhood in the team’s response to the early-season injuries that sidelined two leading attackers, Noll and Sutton Blanchard.

Freshmen John Woodard and Will Nason stepped in to fill out the forward line alongside Jonathan Winbush, but the team missed Noll and Sutton’s size and experience and dropped to 6-9 after 15 games.

But the Furies drew on brotherhood and self-belief to turn the season around, winning the next seven games to finish at 13-9.

Slow start, strong finish. The season as a whole had the same shape as its two key games, a pair of come-from-behind victories over Cape Fear.

On March 11, FCDS trailed by five goals at halftime and came back for a 13-12 win. The comeback became a source of strength for the Furies for the rest of the season.

“There were other games when we were down and at halftime and the guys would say, ‘Hey, remember that Cape Fear game when we came back from five goals?’” Marc Winbush said.

In the state championship game on May 21, Cape Fear scored four of the first five goals and led 12-11 in the fourth quarter before Jonathan Winbush and Burnett turned the tide in the closing minutes for another 13-12 win.

Then everybody celebrated — as brothers.

After all that time waiting, high school football is back

In unusual settings, high school football games across the Triad kicked off on a February night.

When two schools haven’t played a football game in more than 450 days, there are going to be a few mistakes.

North Forsyth and Reagan are natural rivals, but that doesn’t mean the schools aren’t going to help each other.

A preview of the top high school football games in the area Friday night:

Results from the third round of the NCHSAA basketball playoffs Saturday.

Ben Burnett of FCD (background) hugs teammate Owen Baughan after winning the NCISSA Division II Championship lacrosse game May 21. After a rough start, the Furies players forged a bond and were able to use that to make a run at the school’s first boys’ lacrosse state championship.

Forsyth Country Day senior Jonathan Winbush, a two-time All-PACIS pick, is a strong contender to make the NCISAA Division II All-State team for the second year in a row.