Trying to crystalize what a season-long road trip has been like for the Carolina Thunderbirds, Coach Andre Niec quickly made his point.

“We’ve been through hell – and back,” Niec said with a smile.

Actually, the Thunderbirds have been to Elmira, N.Y.; Columbus, Ga.; and Port Huron, Mich., in what has been a road trip for the ages this season in the Federal Prospects Hockey League.

Because it wasn’t economically feasible to play home games at the Winston-Salem Fairgrounds Annex with about 150 fans permitted to attend each night, majority owner Barry Soskin agreed to put his team on the road for the sake of the league.

The fact is, without the Thunderbirds agreeing to travel the roughly 7,500 miles by bus over a 20-game, 47-day season, there most likely would not have been a season.

On Thursday night just outside the Annex, the players started trickling in as the bus stood by waiting to go. They packed their gear and grabbed bottled waters and oranges.

Stan Bachor, a veteran defenseman, wasn’t shy about what he was bringing on the trip. He had a big, fluffy blanket wrapped around his neck like a scarf.

Through all the road trips there’s been a common theme for the Thunderbirds – they are in this together.

Not sure about this season

When Niec agreed to come back as the coach, he wasn’t sure what it would look like having to play all of their games on the road. He has made it work.

“This has not been easy at all,” said Niec, who has coached the Thunderbirds for all four seasons in the league and is No. 2 in league history for wins. “I feel for the boys because it’s so much travel, lots of hotels and no home games. And I feel for some of the new guys on the team because they’ve never seen the Annex full of our fans.”

That doesn’t mean the fans aren’t behind the team. About 25 fans, most dressed in Thunderbirds gear, showed up late Thursday to send them off on their eighth trip of the season, to Elmira for their final three games.

Despite the bus lag, the Thunderbirds, the defending league champions after winning the Commissioner’s Cup in 2019, have stayed in contention for the two playoff spots and can secure one with three wins in New York.

‘You really have to love hockey’

Most of the Thunderbirds earn around $150 a week on the average, but all have jobs around Winston-Salem to help support their dream of continuing to play.

“That’s what this all boils down to, is ‘how much do you really love hockey?’” said forward Fred Hein, a sixth-year pro who is in his mid-20s, which is the average age of the team. “The travel is tough, the schedule is tough, but deep down inside we have the best job in the world because we get to play hockey for a living. That’s what it’s all about.”

Forward Tommy Tsicos, another newcomer, heads into the final series leading the team in scoring. He echoed what Hein said about the love of the sport.

“If you are playing in any level of minor-league hockey you are doing it for the love of the sport,” Tsicos said. “This season, you really have to love hockey with all the traveling we’ve been doing. And these guys on this team – they all love hockey and it shows.”

Keeping the players going as well is the generous Thunderbirds fan club, The Flock, that has has provided groceries and other amenities.

“I played against the Thunderbirds many times, so I know what it’s like,” Hein said of the atmosphere when 3,000 fans are in the Annex. “I was disappointed when we found out there wouldn’t be any home games, but even playing on the road, our fans have come to a few games. The fans really care about this organization, so that’s what keeps us going also.”

Because only five of the 11 Southern Professional Hockey League teams are competing, more players from that league are in the Federal league. Forward Josh Koepplinger, a dynamic forward who is second on the team in scoring, is one of them.

“It’s a neat experience,” he said. “It’s a challenge. But because we are the only team anywhere in pro hockey that is doing this, it’s kind of special. We take pride in what we are doing and we’re a resilient bunch.”

Besides the mileage to play games, the team has traveled back and forth to Greensboro to practice at the Ice House for the last three weeks after the Annex removed the ice to make room for events from the Education Building, which became a COVID-19 vaccination site.

The bubble that the Thunderbirds have created has been a tight one, with 19 players, Niec and play-by-play announcer Drew Blevins traveling to Elmira.

Blevins is the one-man band who announces games on WTOB, the team’s flagship radio station, and makes games available to watch on YouTube.

“Drew’s been great, and he’s so good at what he does,” Niec said. “It’s not easy just to arrive at these rinks and get the technology to work and all of that. I know our fans appreciate that they can at least see us play even if it’s not in person.”

Help off the ice goes a long way

One of the sponsors of the team is Little Italy Pizza in Rural Hall. Before they left on their final road trip earlier in the week, the Thunderbirds ate dinner at Little Italy, which is owned by Domenico Borredon and Margherita Looz.

Forward Petr Panacek, the pass-first veteran who leads the Thunderbirds with 16 assists, has worked at Little Italy for the last three years while also being one of the more popular players on the team. Booredon dropped Panacek off Thursday night for the road trip.

“Whatever we can do to help the team, we try and do it,” Booredon said.

Panacek says that the togetherness of the Thunderbirds has never been better.

“We have to get along because we’ve been together for so long this season,” Panacek said. “I’m really enjoying playing with these guys, and the new guys that are here have really helped us. It’s been fun despite being on the road for so long.”

Traveling through a pandemic

Niec said the team has been tested constantly for COVID-19, but he said about 75 percent of the team is fully vaccinated.

“We are in such a bubble with all of the traveling there’s nowhere to go, so we’re together all the time,” Niec said. “We’ll sleep (on the bus) as we drive to Elmira, we’ll get there, have a morning skate, go to the hotel, sleep a little bit, and then play a game on Friday night. That’s been our routine all season.”

Niec said on average players have been tested twice a week, and anybody with symptoms is isolated.

“We’ve got to be very careful with this,” Niec said. “That’s just another thing to add to the list of what we’ve had to worry about this season.”

Thunderbirds beat Delaware at the Annex

Duncan will be enshrined into the Naismith Hall of Fame on Saturday in Springfield, Mass.

The Eagles drop the first game of the best-of-three NCHSAA Class 4-A softball championship series.

Retired players are eligible for payouts in the NFL's $1 billion settlement of brain injury claims. But the NFL uses a scoring algorithm on dementia testing that assumes Black men start with lower cognitive skills.

Coach Jay Vidovich, a former head coach at Wake Forest, is back in College Cup with Pittsburgh

Will be updated as conferences release more teams. 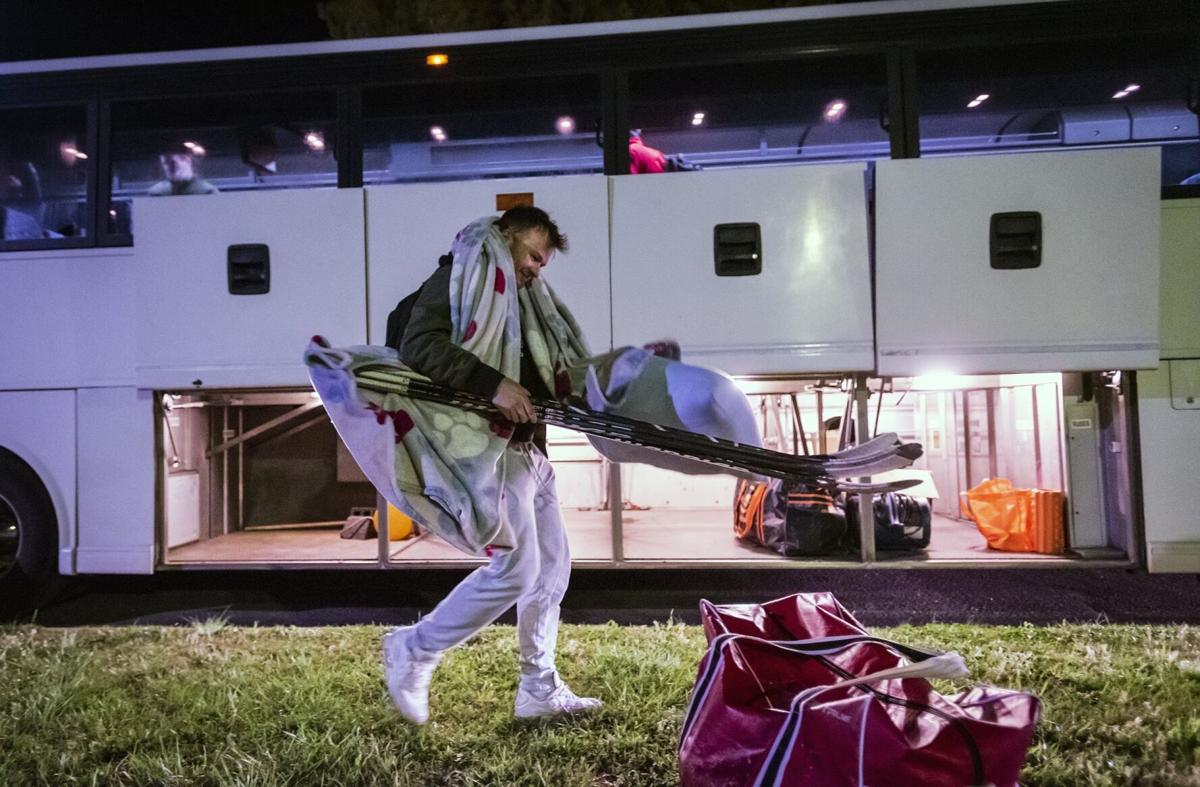 Thunderbirds defenseman Stan Bachor arrives for the final road trip of the team’s season on Thursday night with his hockey sticks and his favorite blanket. 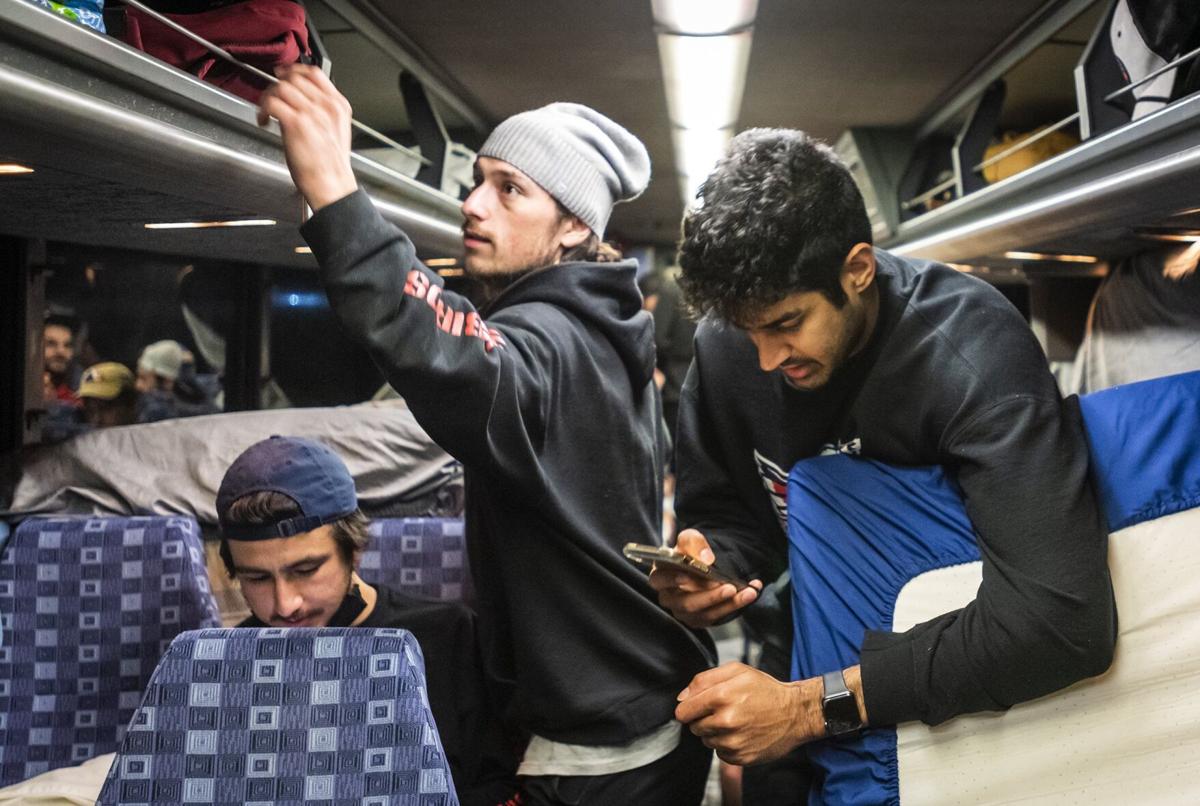 Thunderbirds players Kyle Gonzalez (from left), Zack White and Roshen Jaswal prepare to depart for their final road series of the weekend on Thursday night. The Thunderbirds set out for their road trip to Elmira, N.Y. 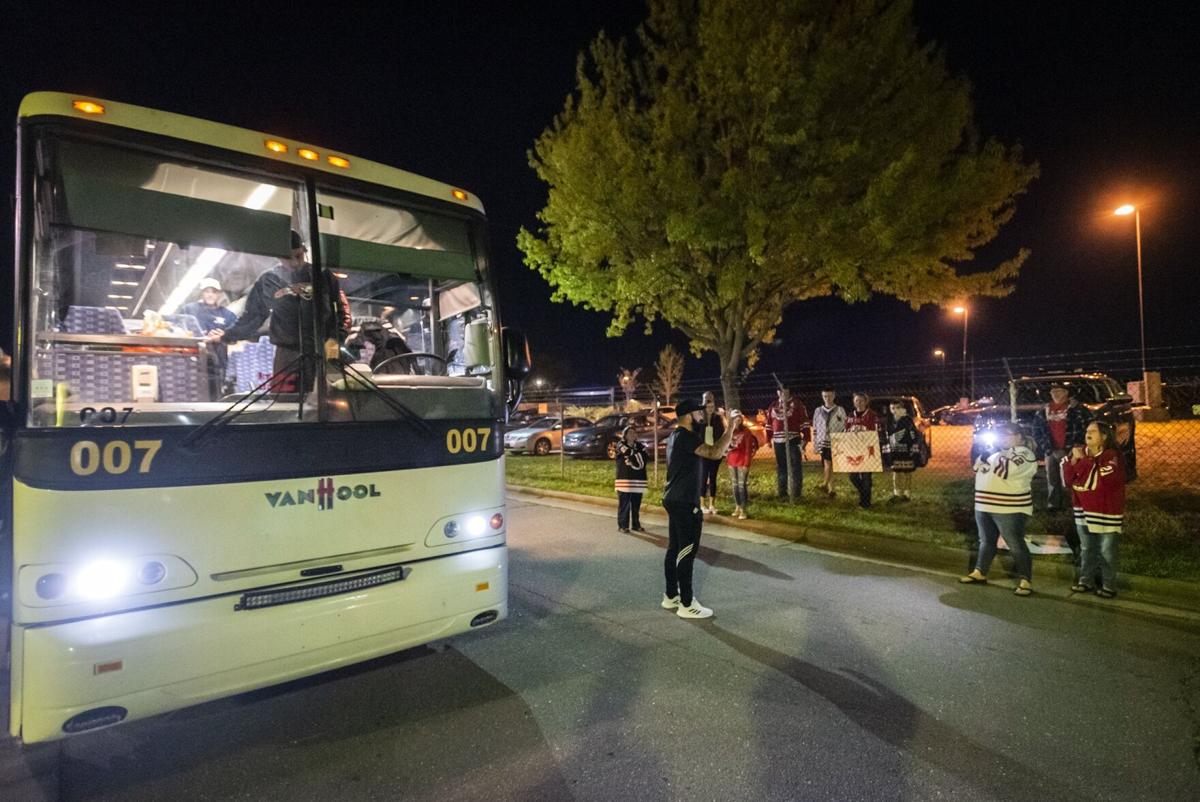 Carolina Thunderbirds fans gather to see of their team as they prepare to travel for the final series of the season on Thursday night. 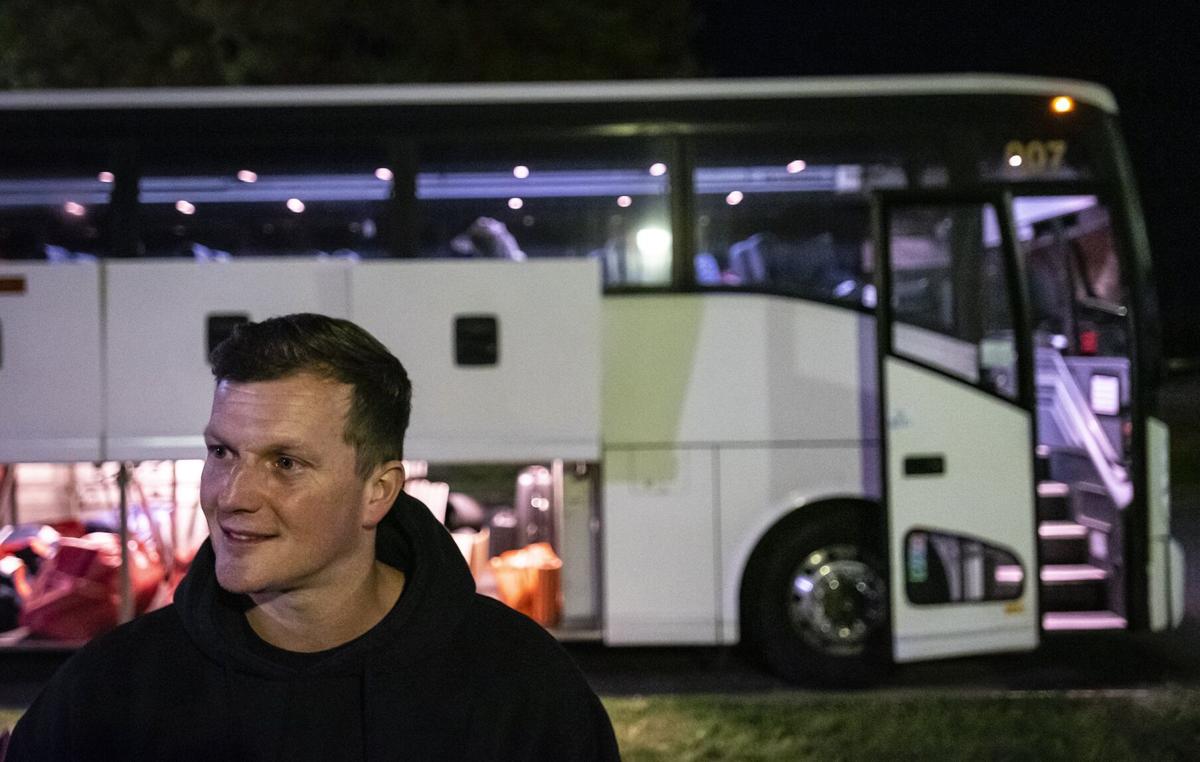 Coach Andre Niec and the Carolina Thunderbirds have traveled about 7,500 miles this season to play 20 games. 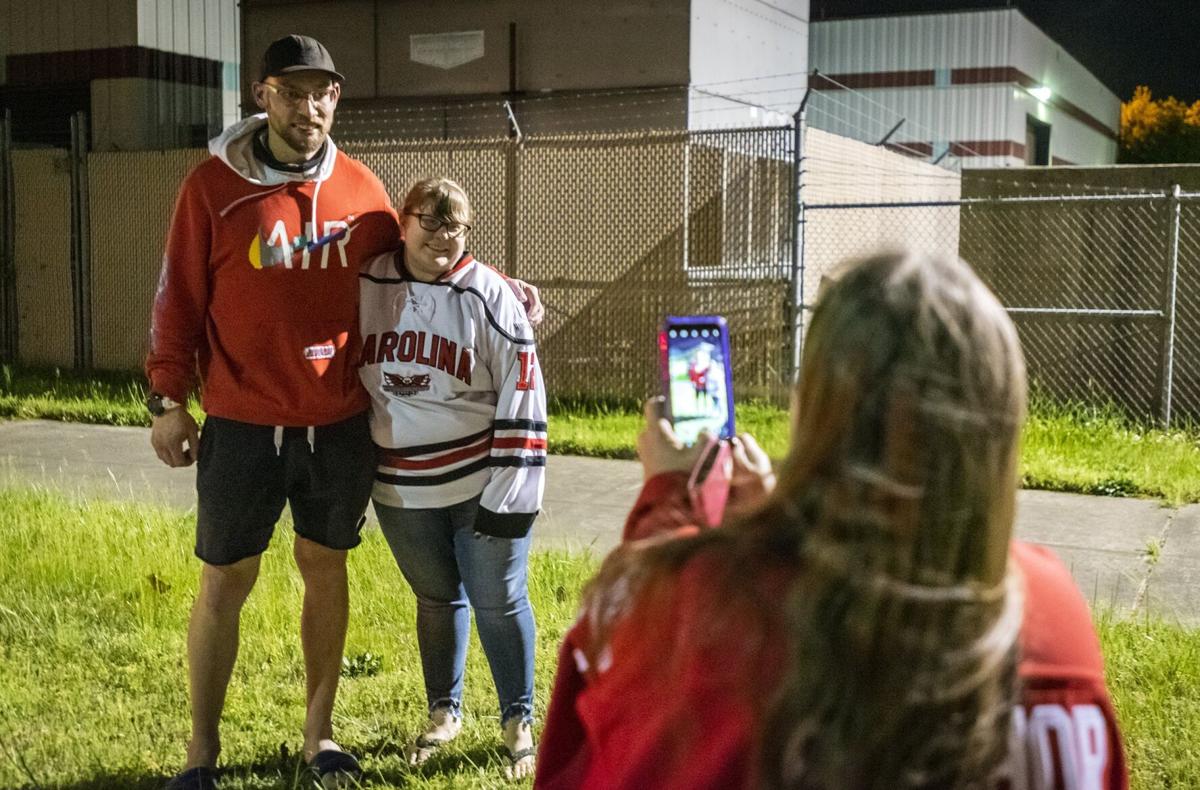