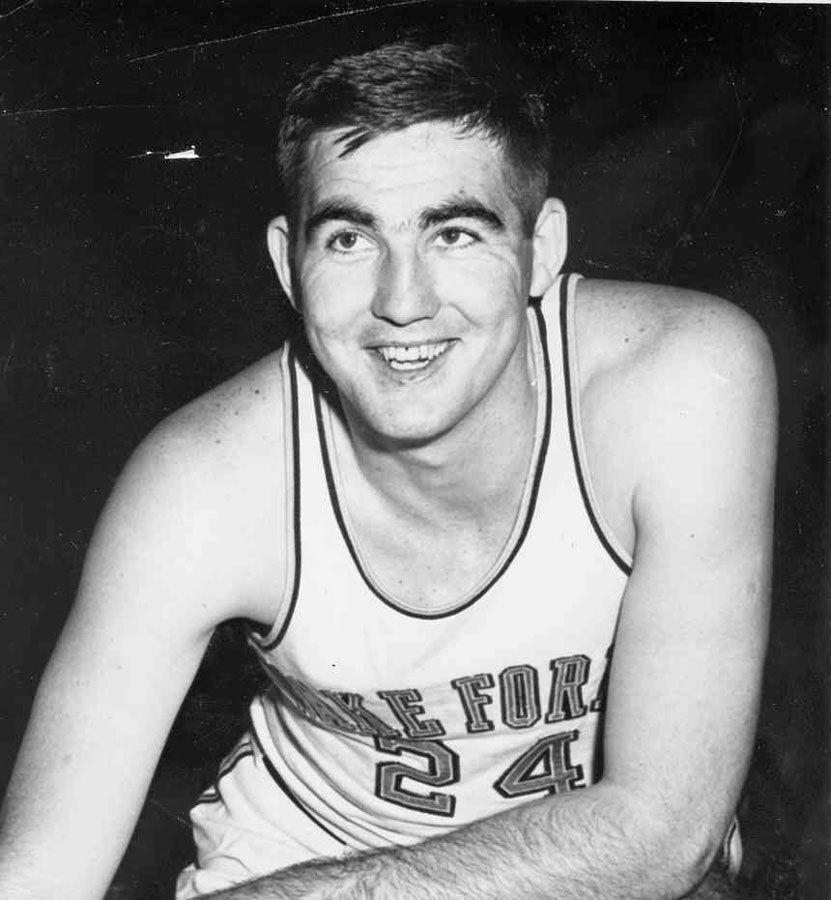 Dickie Hemric, who played basketball for Wake Forest from 1952-55, was the ACC’s all-time leading scorer with 2,587 career points. Duke’s JJ Redick passed Hemric in 2006, and North Carolina’s Tyler Hansbrough broke that record in 2009.

Dickie Hemric, Wake Forest basketball legend, was the ACC player of the year for the league’s first two years of existence.

The team to beat in the earliest days of ACC basketball was N.C. State, which had the best coach in Everett Case, the best arena in Reynolds Coliseum and the best overall talent.

But a good bet to beat the team to beat was Wake Forest, which had the best player.

Dickie Hemric of Jonesville was the ACC’s first superstar, a 6-6, 227-pound center who was named the conference’s player of the year the first two seasons of 1953-54 and 1954-55. Hemric was a unanimous first-team All-ACC player both seasons, the Most Valuable Player of the first tournament of 1954 and a second-team All-America his senior season of 1954-55.

He was so good that one rival coach, Frank McGuire of North Carolina, saw no need to design the Tar Heels’ game plan around stopping the Deacons’ main weapon.

“That guy is going to score about 30 or more points against you regardless,’’ McGuire reasoned. “So why bother to concentrate on him?

“We just try to stop other guys on the team.’’

More than 60 years after playing his final college game, Hemric still holds the ACC’s record with 1,802 career rebounds. He also held the conference mark with 2,587 points before being eclipsed first by J.J. Redick of Duke in 2006 and then Tyler Hansbrough of North Carolina in 2009.

Ned Dixon Hemric died Thursday at age 83 in Akron, Ohio, where he worked for more than 30 years with Goodyear Tire Co. He is survived by his wife, Jan, and their children Ned Jr., John Robert and Cindy Jolivette, along with seven

Hemric never expected to play in the ACC because, being from such a small foothills town, he didn’t realize he was good enough. The conference’s original diamond in the rough first set his sights on Appalachian State, which at the time was playing in the North State League against the likes of Guilford, Catawba, High Point, Elon and East Carolina.

He thought the Southern Conference, the league in which Wake Forest played before the formation of the ACC in 1953, might be a little too fast for his game.

“My first choice was Appalachian State,” Hemric explained years later. “I had a lot of friends there, and I just felt the caliber of play in the old Southern Conference was a little beyond me. I was a junior before I played an appreciable amount of high-school ball.”

Murray Greason, the Wake Forest basketball coach when the campus was still in Wake County, loved to hunt. On one of his hunting trips to Yadkin County, he decided to check out a local player named Hemric who he had been hearing about.

So he stopped at Jonesville Grocery Store to ask the tall, strapping young man behind the counter for directions to the local high school.

“Why are you going there?” the young man asked.

“Because I want to see a basketball player named Dickie Hemric,” Greason answered.

Working was a way of life for Dickie and his nine brothers and sisters. His father was a carpenter, but the family tended a tobacco field to make ends meet.

Times were hard enough that Dickie delivered newspapers to help buy the one pair of overalls each child wore during the week, and the one suit or dress for church. When the overalls wore out at the knees, they were cut off to wear in the field.

Hemric’s appetite for hard work helped make him a great player. He was good as a freshman, when he averaged 22.4 points and 18.6 rebounds, but became even better when Greason hired an ex-NBA center named Bones McKinney as an assistant coach.

McKinney, one of the most colorful characters in ACC history, had played six seasons in the NBA. He and Hemric went at it hard in one-on-one sessions at Gore Gym on the old campus.

“Dickie learned more in a month than any man I ever saw,” McKinney said. “I don’t know of any man who ever progressed as quickly as he did. When he came, he did not have a hook, and he could not shoot a foul shot.”

The jovial, easy-going Hemric made friends easily, but he wasn’t beyond working for any angle he could get. Gore Gym was a snakepit for any visiting team, and according to Skeeter Francis, the long-time publicist for Wake Forest and the ACC, Hemric was an early practitioner at working the referees.

Francis said Hemric was known to stop by the officials’ locker room before the game to welcome the men to Wake Forest.

“I just want to welcome you gentlemen to the game tonight,” Hemric would say. “I’m just so glad you fellows are officiating this game. You’re the best officials in the league.”

“And then he’d go back upstairs and ram everybody’s head into the wall,” Francis explained. “And they wouldn’t call any fouls on Dickie.”

Duncan will be enshrined into the Naismith Hall of Fame on Saturday in Springfield, Mass.

The Eagles drop the first game of the best-of-three NCHSAA Class 4-A softball championship series.

Retired players are eligible for payouts in the NFL's $1 billion settlement of brain injury claims. But the NFL uses a scoring algorithm on dementia testing that assumes Black men start with lower cognitive skills.

Coach Jay Vidovich, a former head coach at Wake Forest, is back in College Cup with Pittsburgh

Will be updated as conferences release more teams.

Dickie Hemric, who played basketball for Wake Forest from 1952-55, was the ACC’s all-time leading scorer with 2,587 career points. Duke’s JJ Redick passed Hemric in 2006, and North Carolina’s Tyler Hansbrough broke that record in 2009.

Dickie Hemric, Wake Forest basketball legend, was the ACC player of the year for the league’s first two years of existence.