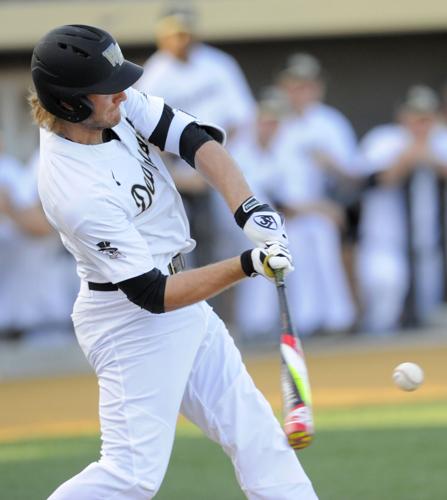 Wake Forest’s Johnny Aiello (2) hits a two-run homer in the first inning during a baseball game against Southern California at David F. Couch Ballpark. Aiello, a switch-hitter, has decided to focus on batting right-handed. 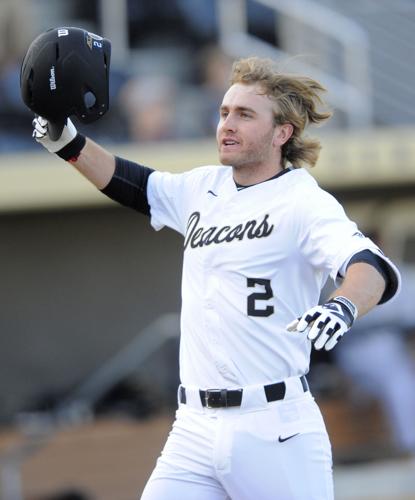 Wake Forest’s Johnny Aiello (2) heads to the plate after hitting a two-run homer against Southern California.

A season ago, Johnny Aiello of Wake Forest was a freshman shortstop who switch hit.

Approaching the midpoint of his sophomore season, he’s a third baseman who bats only right.

The change is one that has benefitted not only Aiello, but the surging Deacons as they enter this week’s series at Miami ranked in the Baseball America Top 25 (at No. 24) for the first time since 2006.

“It was just such a great move,’’ coach Tom Walter said. “It was a great move for him, and it was a team move.’’

Aiello, after batting .226 as a freshman, was playing with the Chatham Anglers of the prestigious Cape Cod League this past summer when he began to contemplate shelving his left-handed swing and concentrating solely on batting right-handed. A natural right-handed hitter, he started hitting from both sides of the plate at age 14 or 15 back home in Lansdale, Pa.

“John has always had a better swing mechanically from the right side,’’ Walter said. “It was a shorter swing with a little more bat speed. His left-handed swing was always a little uphill.’’

Such moves are not taken lightly, especially by a player who is expected to be drafted by MLB after his junior season at Wake Forest. So before stepping into the right-handed batters’ box against the kind of overpowering right-handed pitching a player can face in the Cape Cod League, he dialed Winston-Salem.

“He called me one day and said ‘Coach I’m thinking about just hitting right-handed and giving it a chance, what do you think?’ ’’ Walter recalled. “I said ‘John, I’m 100 percent on board with that plan.’

“I said ‘It’s one of those things where let’s get through the summer. It doesn’t have to be a permanent decision. Let’s see how it goes. And if we want to pick the left-handed (swing) back up in the fall, we can do that.’ ’’

Aiello struggled early against right-handers with the two-seam fastballs that dart into the body and/or the nasty sliders that break away.

Even so, he was not dissuaded. He kept swinging right-handed bat after bat against some of the best pitching in amateur baseball. Only the highest regarded players in college baseball are invited to spend the early summer playing for one of the 10 teams of the Cape Cod League.

“It started to click the last quarter of the season in the summer,’’ Aiello said. “I started seeing the ball better, being able to take pitches in the dirt and stuff like that.

“That’s when I started seeing the results.’’

The success has clearly carried over. Through 96 at-bats this season, Aiello was hitting .323 with an on-base percentage of .455 and a slugging percentage of .667. His nine homers tied Joey Bart of Georgia Tech and Sam Fragale of Virginia Tech for most in the ACC.

“He made that move, and I give him a lot of credit. Not a lot of guys would have done that.’’

The move from short to third, on the other hand, was one he knew he would probably have to make in time. Walter said Aiello’s position in professional baseball would be third base, and Aiello agrees.

Aiello was also well-acquainted with the position, having played it as a freshman in high school. And from what Walter has seen, he plays it well.

“He’s a premium defender at third,’’ Walter said. “He has made some plays this year that we’re not used to seeing. He gets to some balls that we haven’t been getting to in years past. He plays the bunt so well. He’s consistent over there.’’

The move has helped solidify the Wake Forest infield. Bruce Steel, a redshirt sophomore who missed last season with a torn ligament in his thumb, started 16 of the Deacons’ first 17 games at shortstop, at which time he had fewer errors (5) than double plays (6).

Walter said that he would not hesitate to play Aiello at shortstop. And both know the added versatility will only enhance Aiello’s draft status.

“I was happy to do that,’’ Aiello said. “I kind of figured I’d play third at some point because Bruce is really good in the field. He’s really quick and has a really strong arm. It makes more sense for the team.

Childress, a former Wake Forest star, enjoying next phase of his basketball life

Tyree Appleby making an impact for Wake Forest with his experience, speed and scoring ability

Kyle, who is a senior at Forsyth Country Day, is the son of Coach Jerry Haas of the Demon Deacons

Tom Brady reveals the reason he hates the 49ers

The potentially legendary outcomes of the World Cup

The potentially legendary outcomes of the World Cup

The craziness of the 1930 World Cup

The craziness of the 1930 World Cup

Five players who have played at five World Cups

Five players who have played at five World Cups

Wake Forest’s Johnny Aiello (2) hits a two-run homer in the first inning during a baseball game against Southern California at David F. Couch Ballpark. Aiello, a switch-hitter, has decided to focus on batting right-handed.

Wake Forest’s Johnny Aiello (2) heads to the plate after hitting a two-run homer against Southern California.