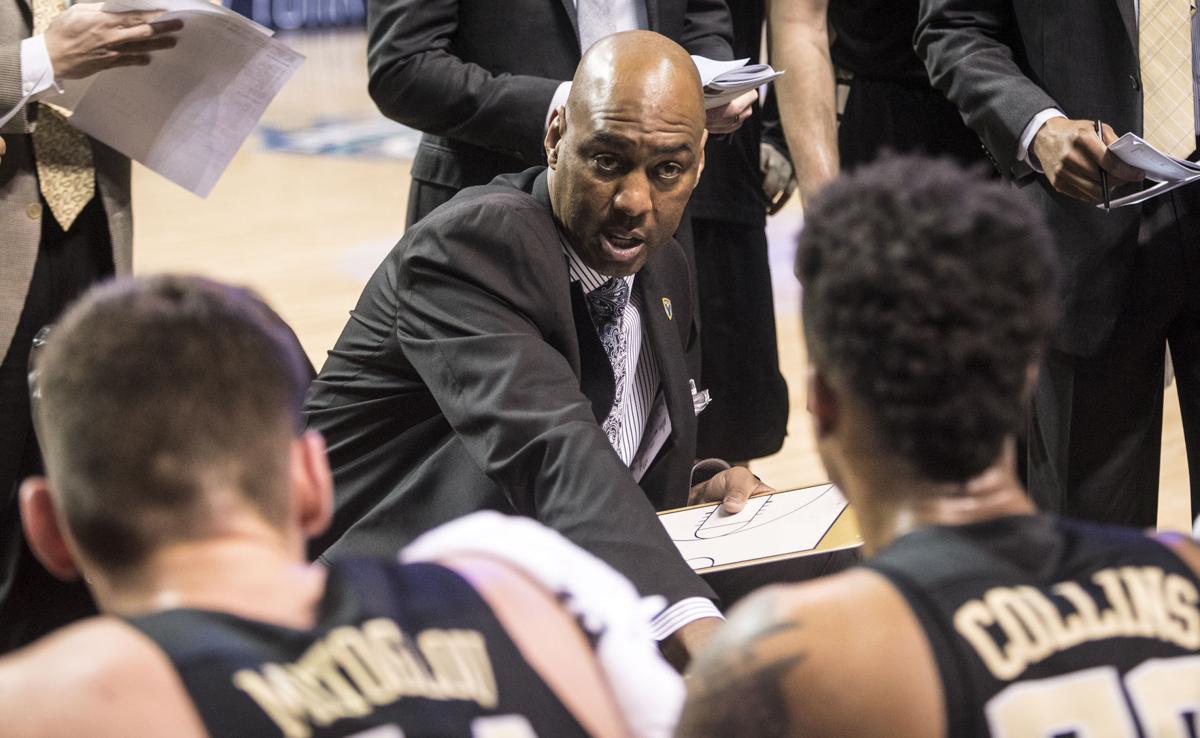 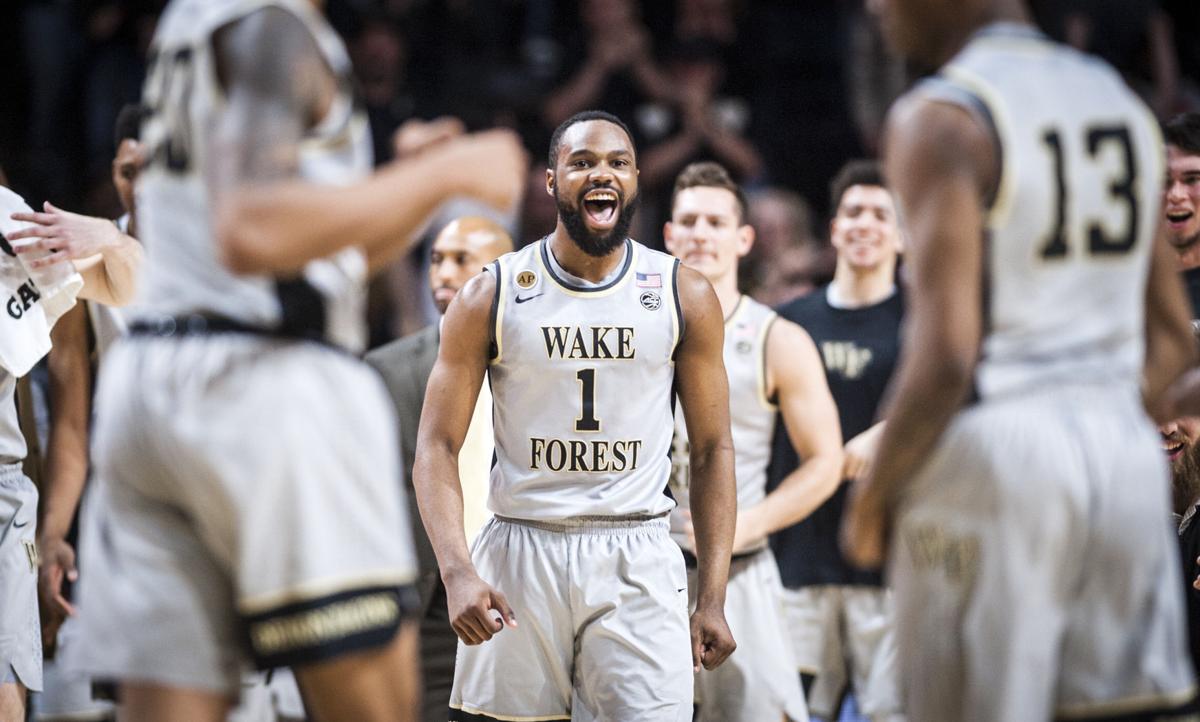 Wake Forest sophomore guard Keyshawn Woods (1) celebrates after Louisville called a timeout late in the second half on March 1 in Winston-Salem. The Deacons will play Kansas State in the NCAA Tournament. 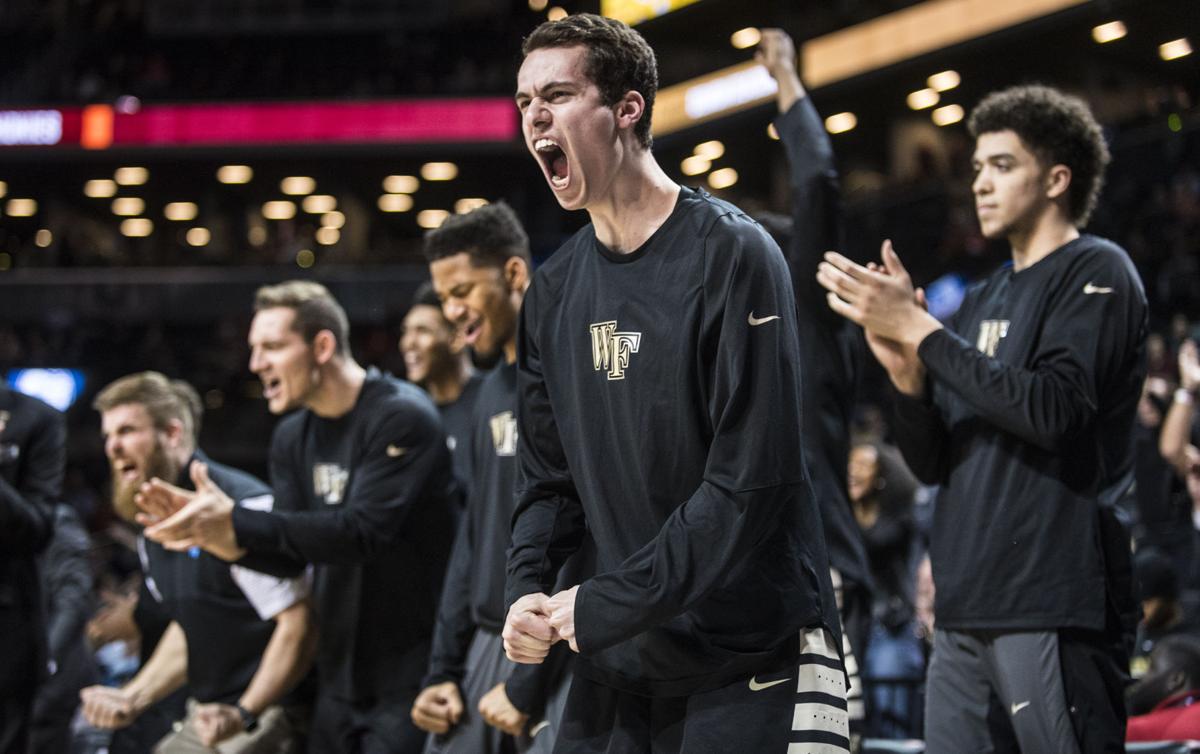 The word fell like rain drops on the most parched post-season landscape in the Atlantic Coast Conference.

Wake Forest is back in the NCAA Basketball Tournament for the first time since 2010.

The Deacons will play Kansas State of the Big 12 Conference in the play-in round in Dayton on Tuesday for the opportunity to be seeded No. 11 in the South Regional. The winner will play No. 6-seed Cincinnati on Friday in Sacramento, Calif.

Wake Forest’s drought of six straight seasons without a postseason bid was the longest in the ACC. The Deacons will make their 23rd appearance in the NCAA Tournament, and their 30th appearance in post-season play.

The Deacons are 19-13, having won four of their last five games. Kansas State, coached by Bruce Weber, is 20-13 overall and finished sixth in the Big 12 with an 8-10 conference record.

The Wildcats won three in a row before losing to West Virginia 51-50 in the second round of the Big 12 Tournament on March 10.

“We’re really excited,’’ Coach Danny Manning of the Deacons said. “We’re relieved to see your name up there and I think with all the hard work and adversity we’ve faced this year, it’s nice to see that rewarded with an opportunity to continue to play in the NCAA Tournament.

“Now it’s about getting as prepared as possible to face a very talented K-State team.’’

Manning, who endured seasons of 13-19 and 11-20 at Wake Forest before reaching the NCAA Tournament in his third season as head coach, said he’s not worried about having to play on Tuesday in Dayton. The game is scheduled to tip off at 9:10 p.m.

“If we had to hop on a plane right now, we’re ready to go,’’ Manning said. “You really can’t worry about it because you can’t control it.’’

Wake Forest was one of nine ACC teams to received bids.

North Carolina is seeded No. 1 and will play No. 16 Texas Southern in the South Region in Greenville, S.C. on Friday.

Duke is seeded No. 2 and will play No. 15 Troy in the East Region in Greenville, S.C. on Friday.

Louisville is seeded No. 2 and will play No. 15 Jacksonville State in the Midwest Region in Indianapolis on Friday.

Florida State is seeded No. 3 and will play No. 14 Florida Gulf Coast University in the West Region in Orlando on Thursday.

Notre Dame is seeded No. 5 and will play No. 12 Princeton in the West Region in Buffalo on Thursday.

Virginia is seeded No. 5 and will play No. 12 UNC Wilmington in the East Region in Orlando on Thursday.

Miami is seeded No. 8 and will play No. 9 Michigan State in the Midwest Region in Tulsa on Friday.

Virginia Tech is seeded No. 9 and will play No. 8 Wisconsin in the East Region in Buffalo on Thursday.

Wake Forest had to sweat out four days after losing to Virginia Tech 99-90 in the second round of the ACC Tournament on Wednesday.

The Deacons prospects looked dim when they lost for a second time to Clemson on Feb. 14 to fall to 15-11 and 6-8 in conference play.

But after a heart-breaking home loss to Duke on Feb. 18, they reeled off successive victories over Pitt, Louisville, Virginia Tech and Boston College. The victory over Louisville gave the Deacons their first win against a ranked ACC opponent since Manning became head coach, and the win at Virginia Tech was their third road win of the season in conference play.

Leading the way was John Collins, a first-team All-ACC sophomore averaging 18.9 points and 9.8 re-bounds a game.

“We thought that John Collins would give us a chance to have some success,’’ Manning said. “We didn’t fare as well as we would have liked. We came up short in some games that we played. But I think that that adversity helped us down the stretch of our conference without question.

“We would have liked to have gotten a few more wins in the ACC Tournament, but obviously we did enough to extend our season game by game.’’

Will the Houston Texans be the worst team in the NFL at the end of the season?

Stay away from Justin Herbert's passing yards Prop at 4,550.5

Stay away from Justin Herbert's passing yards Prop at 4,550.5

Should Cade Cunningham be the #1 pick in the NBA draft?

Should Cade Cunningham be the #1 pick in the NBA draft?

Hot or Not: USA Basketball proved with win over Iran they will win gold?

Hot or Not: USA Basketball proved with win over Iran they will win gold?

My Take on Wake: Dayton or Not, Give Deacons Their Due

A long-time friend — and you know who you are — asked me a couple of weeks ago that if Wake were sent to the play-in game in Dayton and lost, …

Villanova gets top seed in NCAA Tournament; Syracuse out

For pure drama, best wait 'til the shots start flying.

You've got it, Greensboro: UNCG to visit Syracuse for NIT game

UNC-Greensboro will play at Syracuse in a first-round NIT game on Tuesday night.

The Latest on Selection Sunday for the NCAA Tournament (all times Eastern):

How to win your NCAA office pool: Take North Carolina

Whittling down 68 candidates and deciding who will be the last one standing is a tedious task. But enough about what seemed like a never-endin…

Wake Forest sophomore guard Keyshawn Woods (1) celebrates after Louisville called a timeout late in the second half on March 1 in Winston-Salem. The Deacons will play Kansas State in the NCAA Tournament.