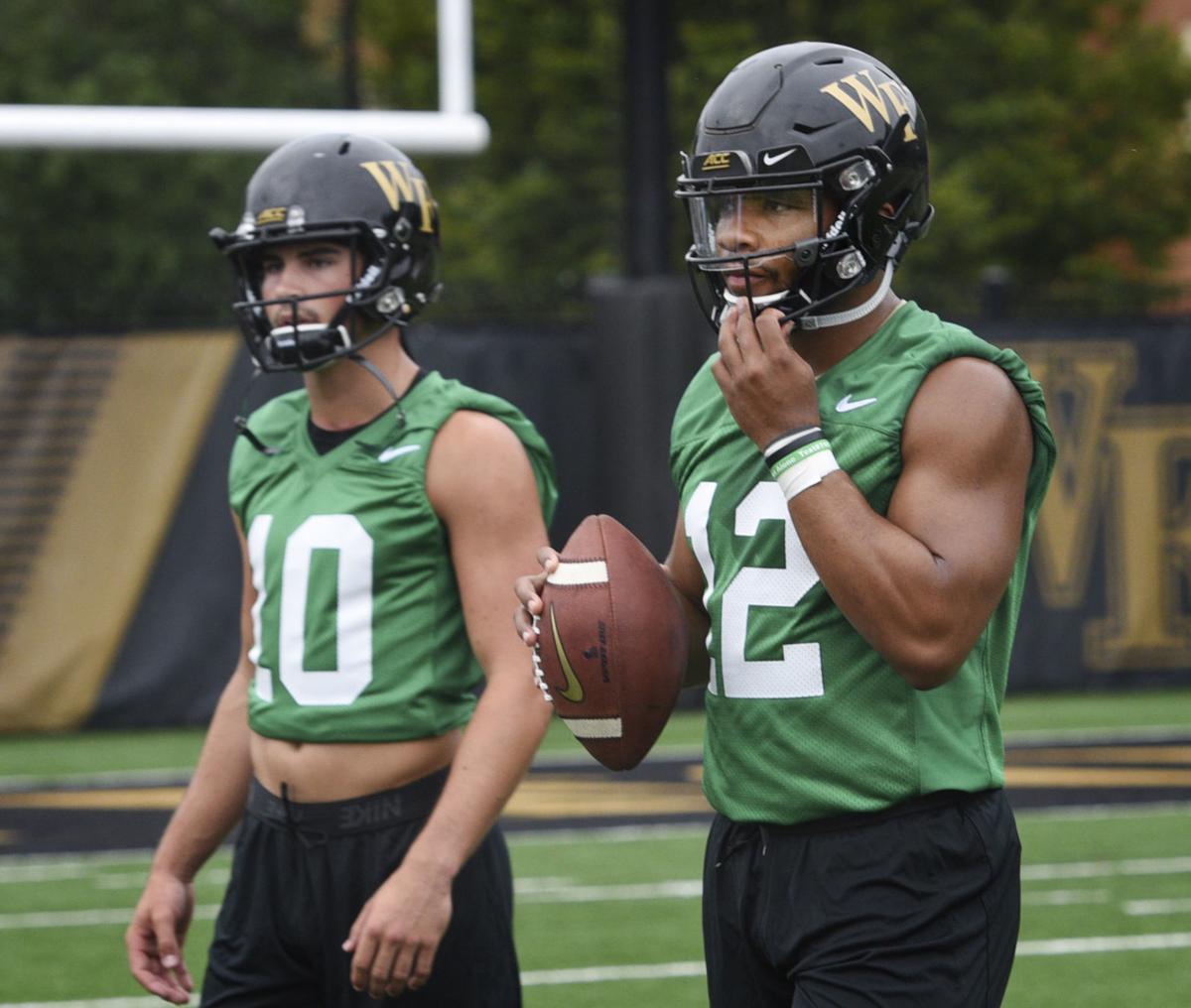 Quarterbacks Sam Hartman (left) and Jamie Newman will split repetitions with the first team as both compete to be the starter for the Deacons in the first game of the season. 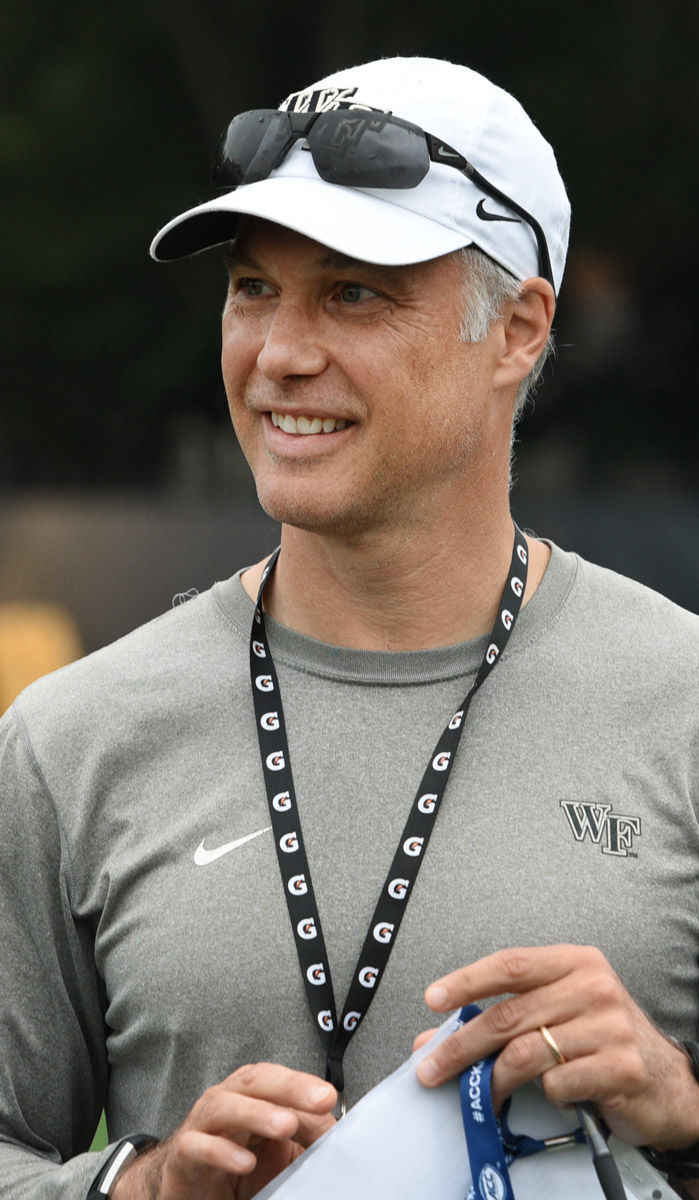 Coach Dave Clawson of Wake Forest said it’s an “open competition” between Jamie Newman and Sam Hartman to be the starting quarterback while Kendall Hinton serves a three-game suspension. 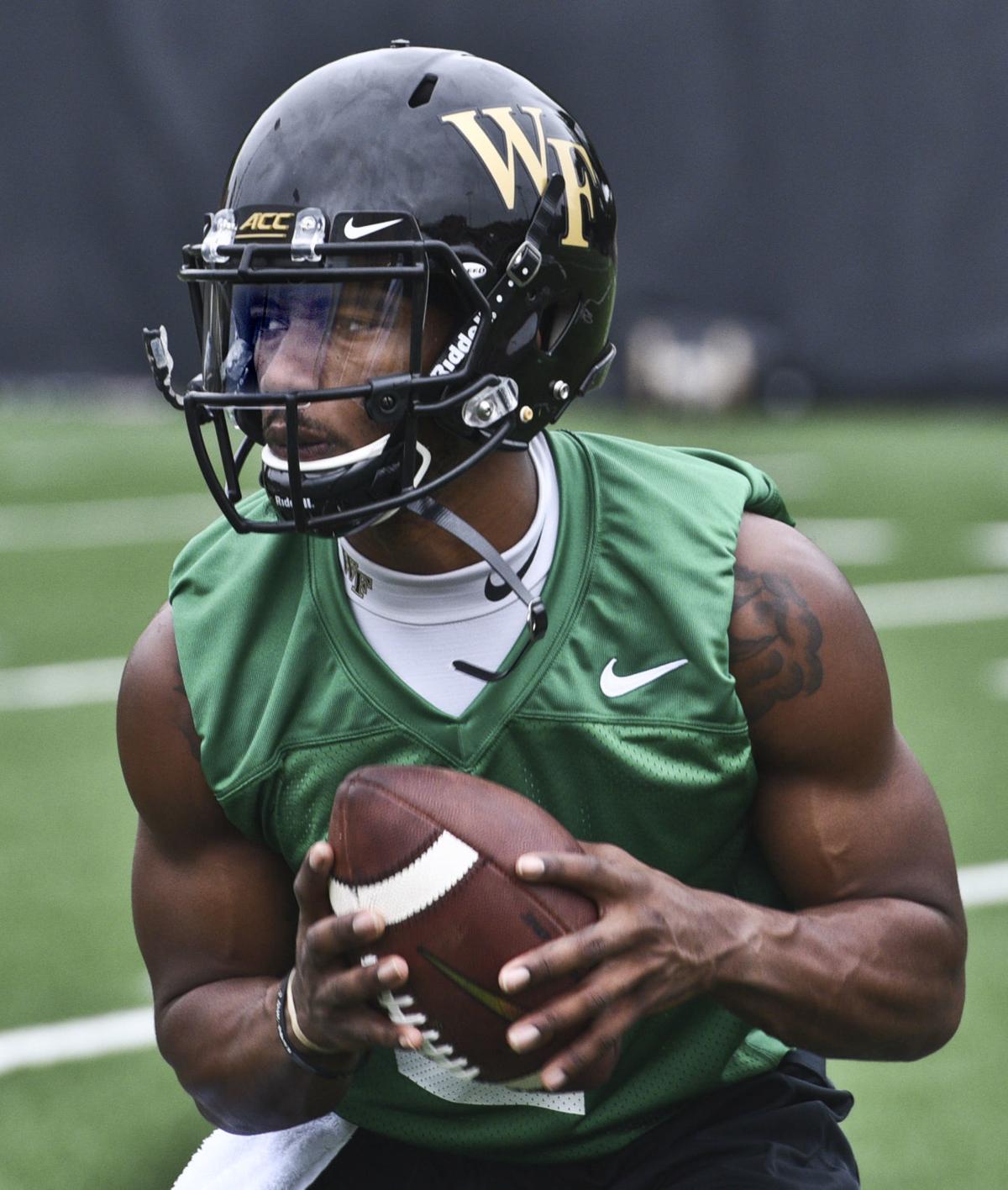 Wake Forest football players were on the field for the first practice of fall camp Wednesday morning, with approaches ranging from the day being a normal practice for one redshirt sophomore to only being able to sleep two hours the previous night because of excitement for another.

“Oh man, I couldn’t sleep at all last night. I’m talking about, I went to sleep at like 12 and I woke up at 2,” receiver Greg Dortch said.

“Not nervous at all. Just another practice,” said Jamie Newman, one of two candidates to start the season-opening game at Tulane on Aug. 30.

The first practice of fall camp saw Wake Forest players wearing only helmets, jerseys and shorts — the Deacons likely won’t be in full pads until Sunday. Newman and Sam Hartman, the true freshman and other candidate to start at quarterback in the absence of Kendall Hinton (suspended), split first-team offense snaps, which is the way Coach Dave Clawson said it would go two weeks ago at the ACC’s media event.

Clawson was pleased with the first practice, noting two aspects as the biggest positives.

“Our tempo was good, you could see all the work the guys put in in the summer and we just had … a good flow and guys stayed up,” Clawson said. “The first practice, the guys don’t have the pads on and you don’t want to see a lot of guys on the ground, so those are the two positive takeaways from today.”

Jumping into the position of greatest interest, Clawson said the competition for the starting QB spot features just two players.

“To be the starter Day 1 is between Jamie and Sam. Those two guys will get all of the one-reps and a lot of the two-reps, and we’re just going to flood them with reps,” Clawson said. “You know, they may both have to play, we’ll see how it goes.”

Newman and Hartman both looked sharp Wednesday, albeit with minimal snaps taken with offensive or defensive lines on the field. Newman connected with running back Christian Beal for a long touchdown pass down the seam, while Hinton completed two long touchdown passes to receivers Steven Claude and Jaquarii Roberson.

The quarterback situation will be “fluid,” Clawson said, and he added that Hinton could be used in other capacities.

“Kendall is a guy — he’s really good when the ball is in his hands. And there’s ways to have the ball in his hands other than quarterback,” Clawson said. “We have him returning kicks, we have him returning punts. I hope Greg Dortch stays healthy all year, but Kendall is very natural at doing that stuff. And he’s just gotta work his way back, but knowing you don’t have him the first three games, it’s hard to invest (first-team) quarterback reps in him.”

Dortch wasn’t returning to the Deacons’ practice fields after a long absence, since he was a full participant in the spring.

That didn’t quell his excitement to zip around the field again, though.

“It’s always a great feeling when I come out here. I love this game of football,” Dortch said. “Just being able to come out here once again with my teammates, I missed a lot of time, so every time I come out here I cherish it with them.

“I know they missed me, I know I have to take on a role this year that’s different from last year, just with me being mature and them looking for plays from me. I’m looking forward to everything.”

Among a few news items from the first practice was that Kelijiha Brown is no longer with the team. The defensive tackle from Saluda, S.C., told Clawson last week he was leaving the team “for personal reasons, that he wants to be closer to home,” the coach said. Brown was an early enrollee and went through spring practice.

While Clawson lamented losing Brown and losing a player at a position he calls one that you can never have too many players, the silver linings are that the Deacons were likely going to redshirt Brown and it’s better to adjust a recruiting strategy now than three months from now.

Quarterbacks Sam Hartman (left) and Jamie Newman will split repetitions with the first team as both compete to be the starter for the Deacons in the first game of the season.

Coach Dave Clawson of Wake Forest said it’s an “open competition” between Jamie Newman and Sam Hartman to be the starting quarterback while Kendall Hinton serves a three-game suspension.