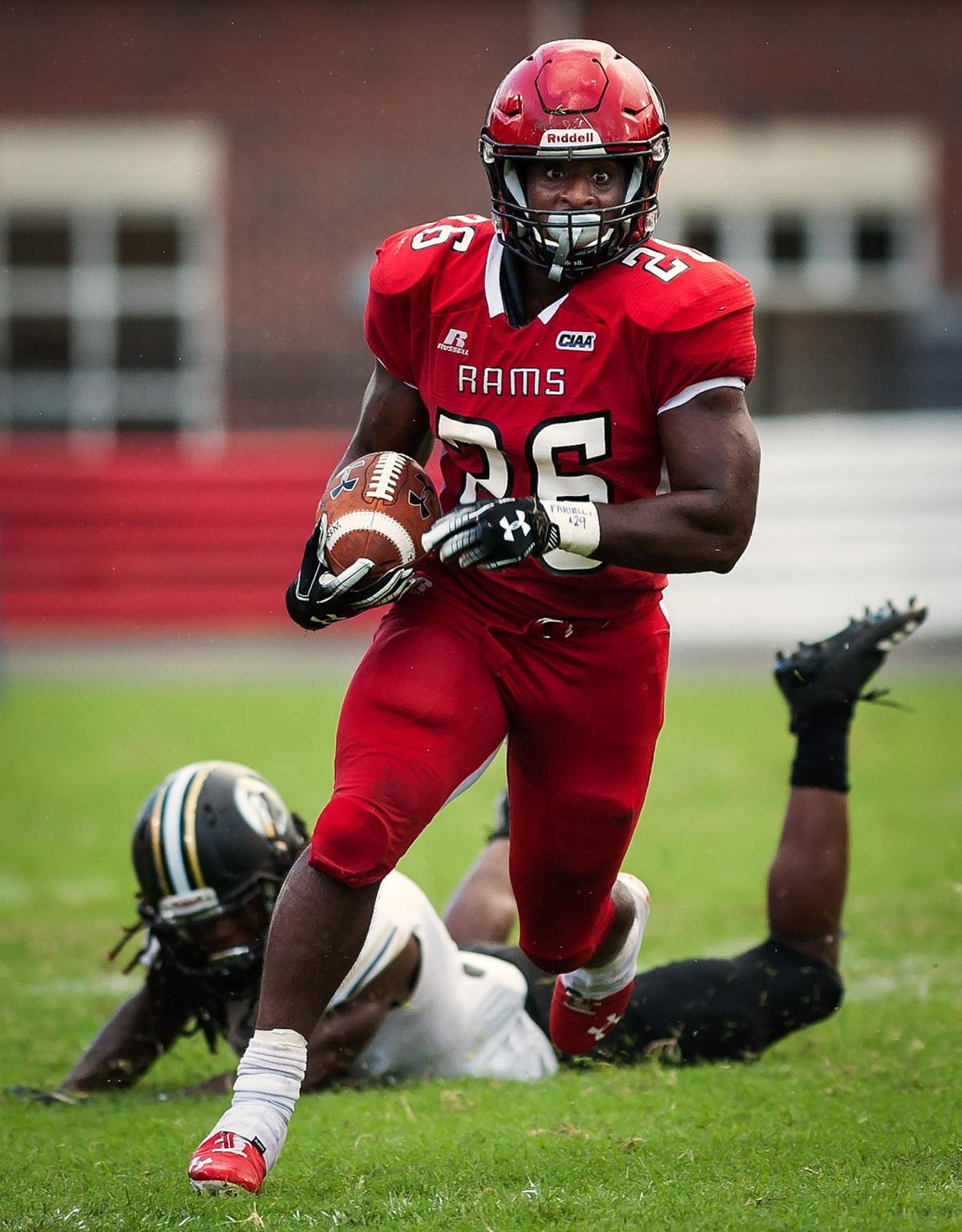 Winston-Salem State running back Kerrion Moore breaks away to score the game-winning touchdown with 30 seconds to play against UNC Pembroke on Sunday at Bowman Gray Stadium. 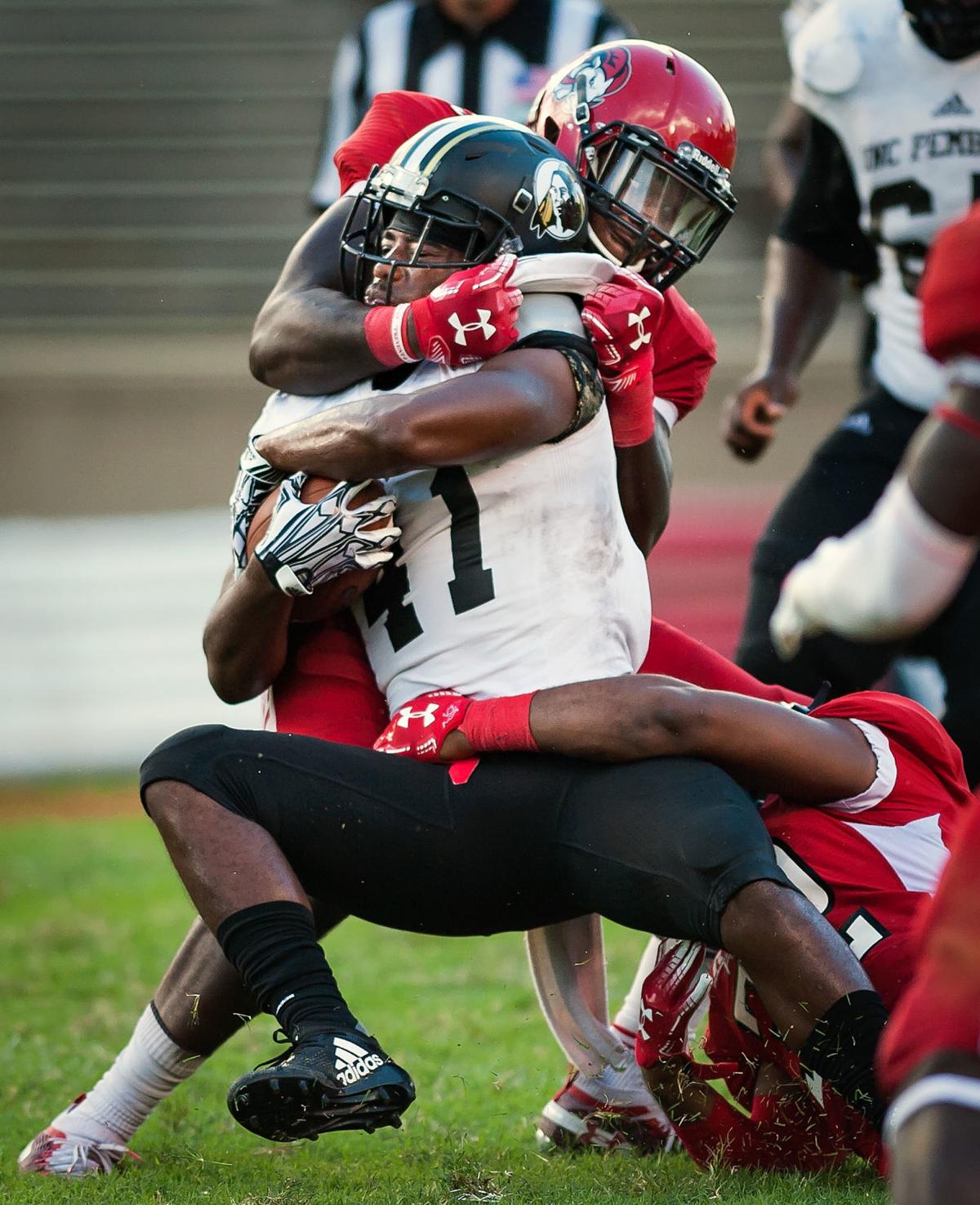 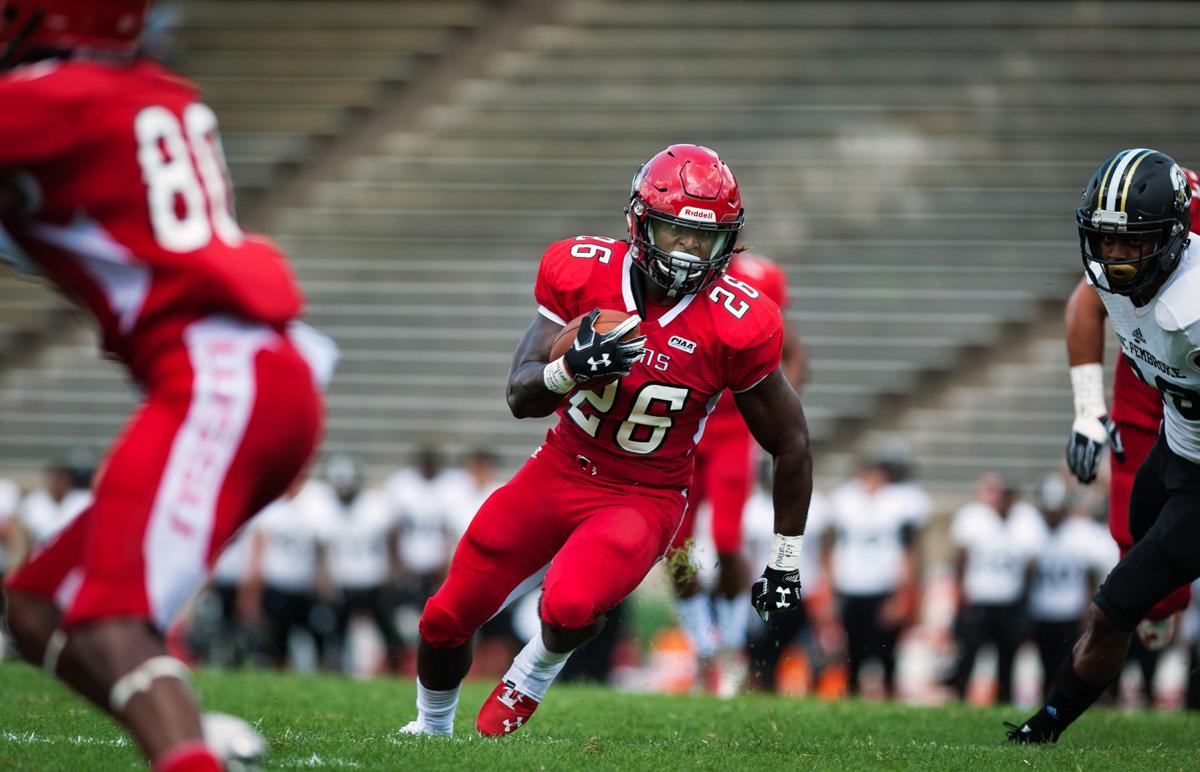 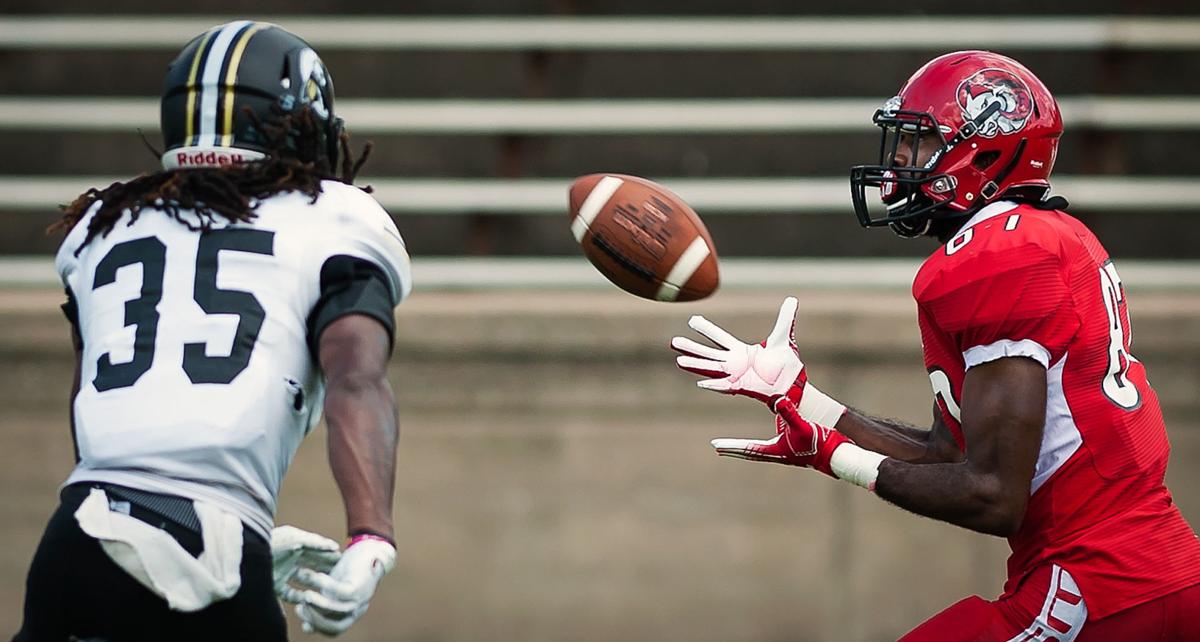 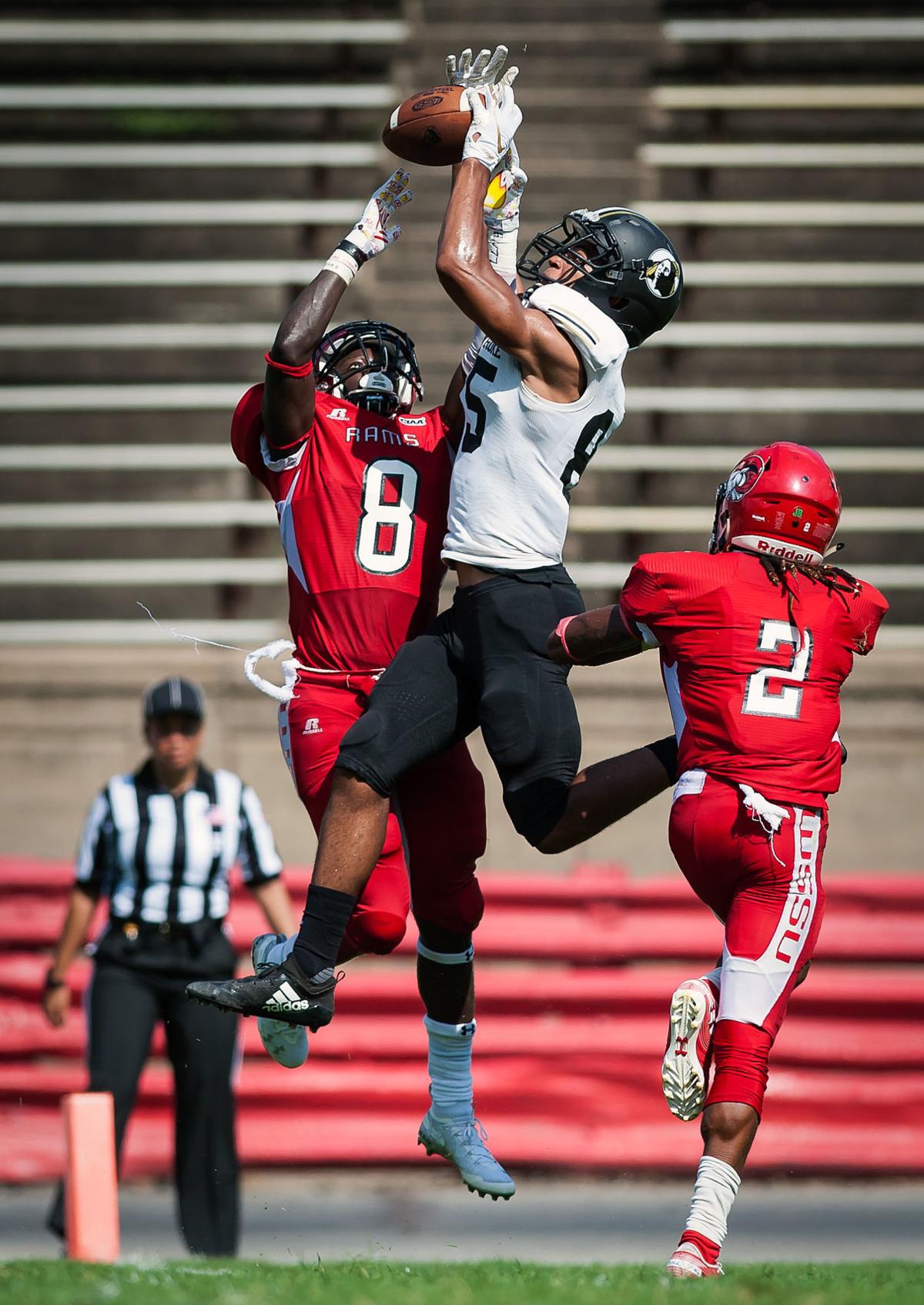 The “Immaculate Reception” is alive and well at Winston-Salem State.

The original Immaculate Reception, pulled off by quarterback Terry Bradshaw and running back Franco Harris of the Pittsburgh Steelers in 1972, was good, but as far as WSSU fans are concerned, Sunday’s version was better.

Running back Kerrion Moore of the Rams had a 63-yard touchdown catch and run after quarterback Rod Tinsley was trying to hit wide receiver Jaylan Barbour on a fourth-down play with 30 seconds left. Barbour tipped the ball and Moore was there to catch it and do the rest as the Rams somehow beat UNC Pembroke 23-20.

Moore, a senior running back, scored all three of the Rams’ touchdowns as he saved the day in one of the more wackier games in recent seasons.

“I just remember my coach (offensive coordinator Natrone Means) saying to get out there and block for the wide receivers because they always block for me,” said Moore, who rushed for 95 yards on 17 carries and also scored on touchdown runs of 7 and 27 yards. “It was just a tip drill after that. I only had one man to beat, and he tried to take me out like a shoe-string tackle, but I just avoided that and got to the end zone.”

It was a wacky ending to a wacky game that was supposed to be played at 6 p.m. on Saturday. Because of heavy storms, the game was moved to 3 o’clock on Sunday. Admission and parking was free.

The Rams had seemingly an insurmountable lead at 16-0 when another approaching lightning storm rolled in at 5 p.m. With 12:04 to go in the game and the Rams up 16-0, the game was halted and the crowd had to be evacuated.

Both teams spent more time in the locker rooms, this time more than an hour, before play resumed.

When play resumed, the young Braves nearly came of age scoring three touchdowns to take a 20-16 lead. The final score for the Braves came with 1:51 left on a Tashawn Carter 38-yard touchdown catch from freshman quarterback Josh Jones.

When the game resumed, only about 300 to 500 fans came back to watch and the WSSU fans were obviously stunned.

But Tinsley, who had been benched in favor of backup Emiere Scaife for much of the second half, came back out for the final drive. And on a fourth-and-4 Tinsley kept the Rams alive with his throw to Barbour.

“We ran the play and it worked out,” said Tinsley, a fifth-year senior who was 5-of-9 passing for 130 yards but threw the most important touchdown of the game even if it was fluke play. “Jaylon got the assist, kind of like in basketball.”

Tinsley said without Moore and his heroics there’s no way they win the game.

“Words can’t really explain it,” Tinsley said. “He makes so many big plays, and we’ve got one of the best running backs to have ever played football, so we’re blessed to have him on our team.”

Boulware said he had no explanation for why the Rams came out so sluggish after the weather delay. But he also was encouraged how they showed resiliency after falling behind late in the game.

“We’re very lucky and fortunate to come away with the victory,” Boulware said. “That last touchdown couldn’t have happened to a better guy, and it’s a great win for the program and we’ll take it.”

The Braves had only 85 yards of offense before the delay but found new life because of Jones.

Coach Shane Richardson, who is in his fifth year as head coach of the Braves, doesn’t have a senior starter on offense. He has a young team and was encouraged by the comeback.

“I think there’s a lot of character shown right there and a lot of things we can build off of,” Richardson said. “I told our guys there’s very few occasions where I’ve been more prouder of a team for what they did in those last 12 minutes.”

Jones was 17-of-27 passing for 223 yards and had two touchdown passes but before the delay was running for his life most of the time.

Defensive end Jack Nimmons of the Rams, who had two sacks to go along with his five tackles, said he’s not sure why the Rams had such a letdown after the long delay.

“We had a couple of mistakes and didn’t focus like we need to,” Nimmons said about letting the 16-0 lead slip away. “It’s an ugly win, but we’ll take it.”

Means, who is in his first season as offensive coordinator, was asked about the final touchdown and the play that was called. He’s old enough to remember the original Immaculate Reception.

“Hey, it worked just like we drew it up,” he said with a laugh and a wink.

Because of the game being moved to Sunday, the Rams have a short week to prepare for Catawba on Saturday at Bowman Gray Stadium.

“We’ve got another game coming up, so we’ll have to tighten things up and be ready to go,” Boulware said. “We can’t celebrate too long.”

Winston-Salem State running back Kerrion Moore breaks away to score the game-winning touchdown with 30 seconds to play against UNC Pembroke on Sunday at Bowman Gray Stadium.