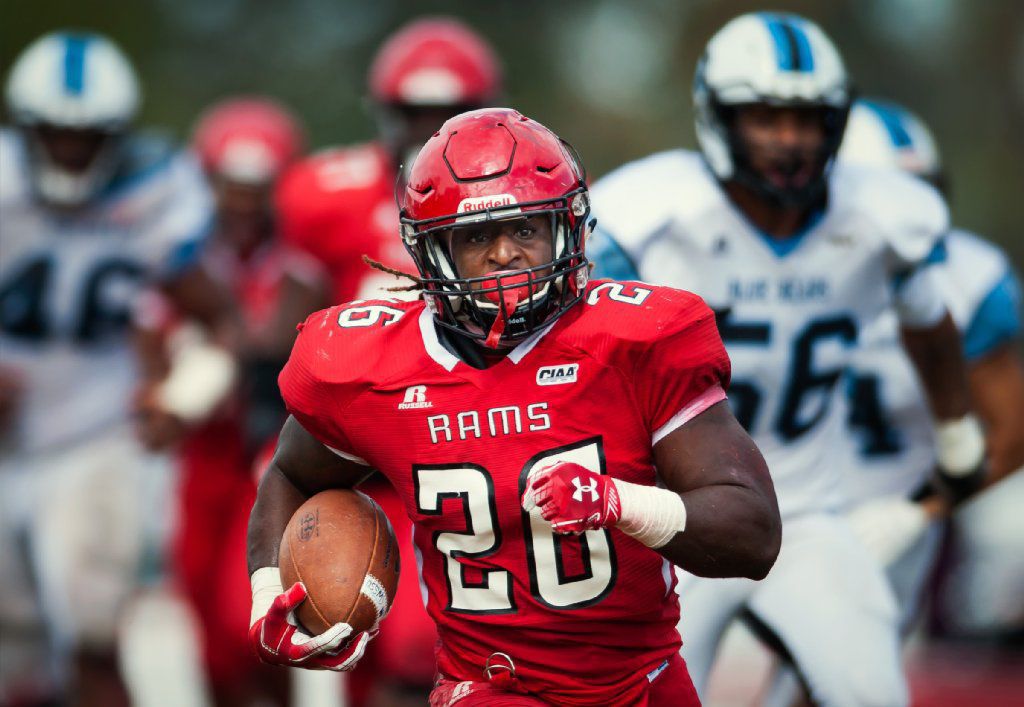 Kerrion Moore rushed for 154 yards on 21 carries and scored two touchdowns as the Rams won their third straight game. 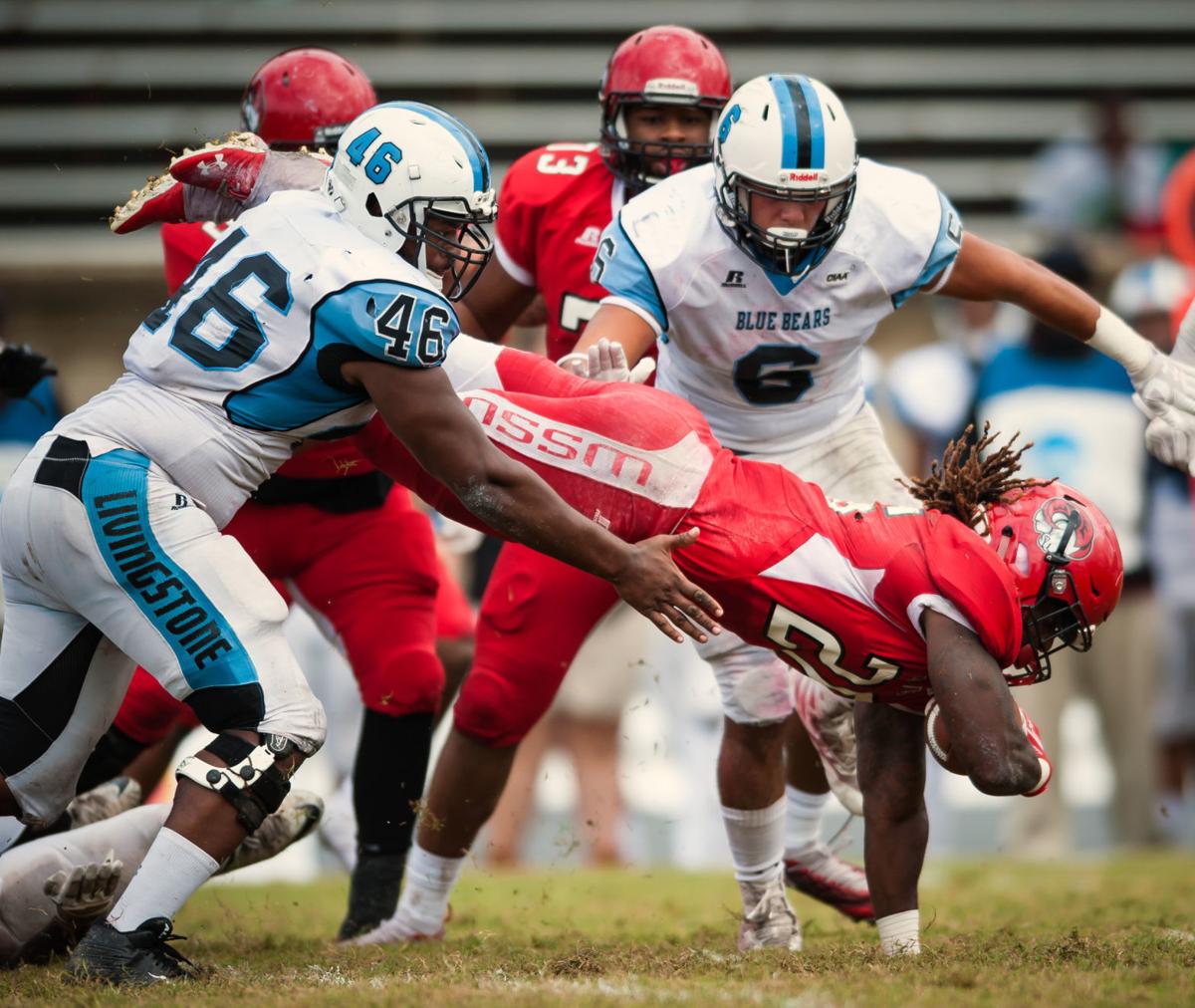 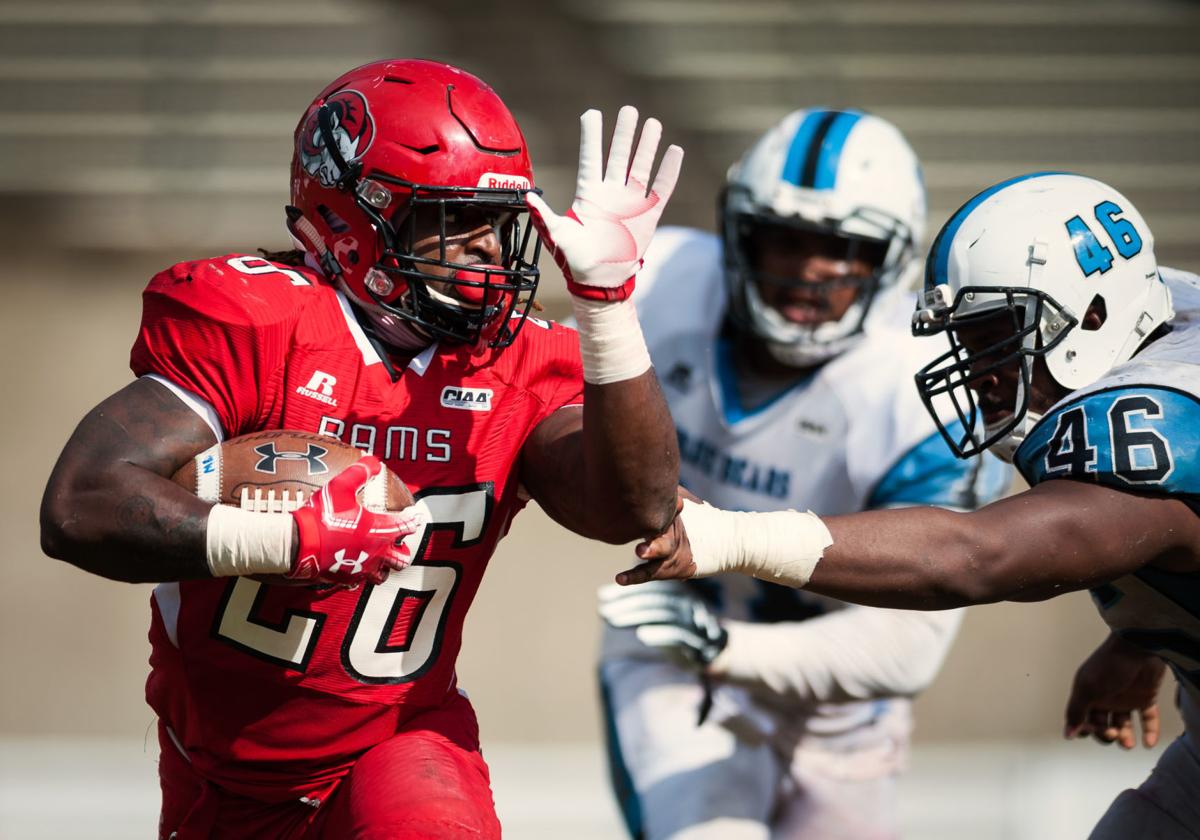 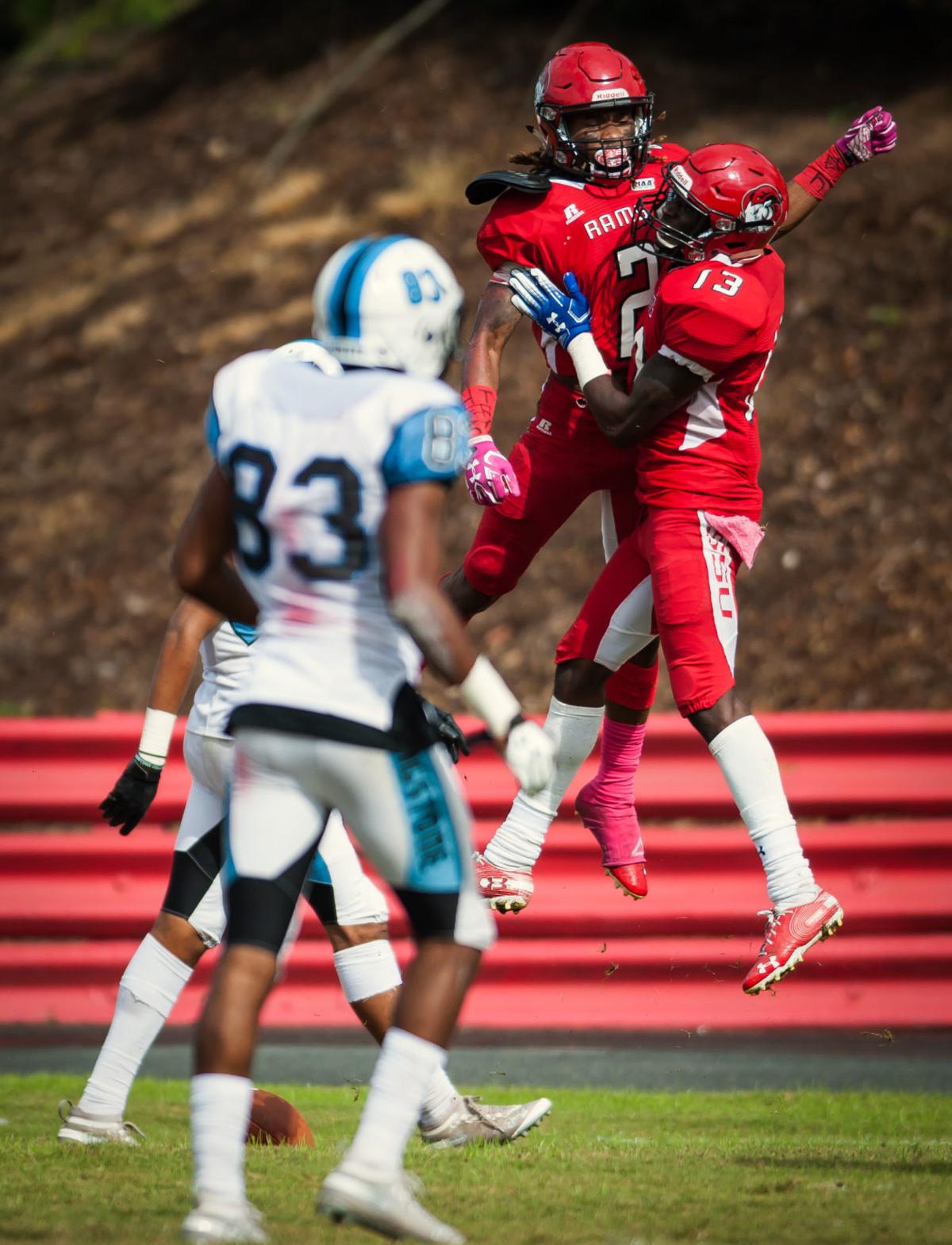 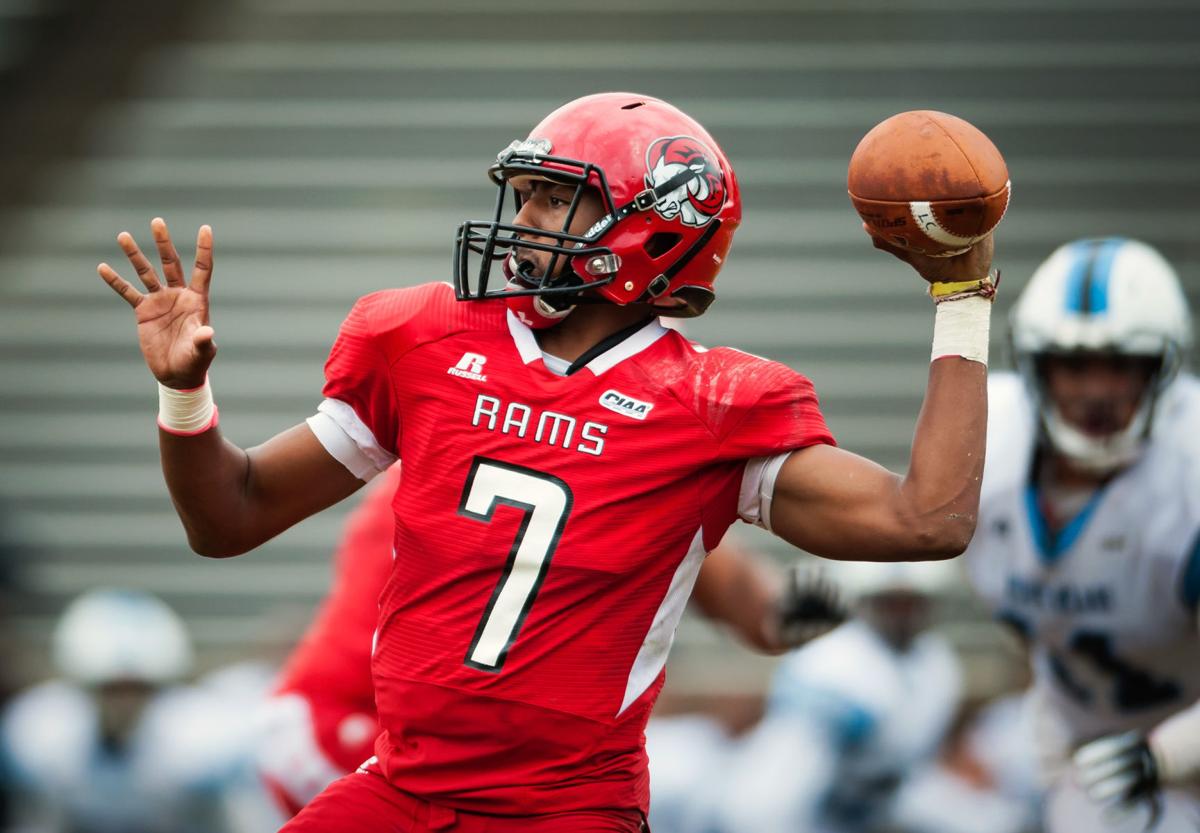 WSSU quarterback Dominique Graves (7) throws a pass in the first quarter against Livingstone.Graves limped off the field after getting sacked early in the fourth quarter. 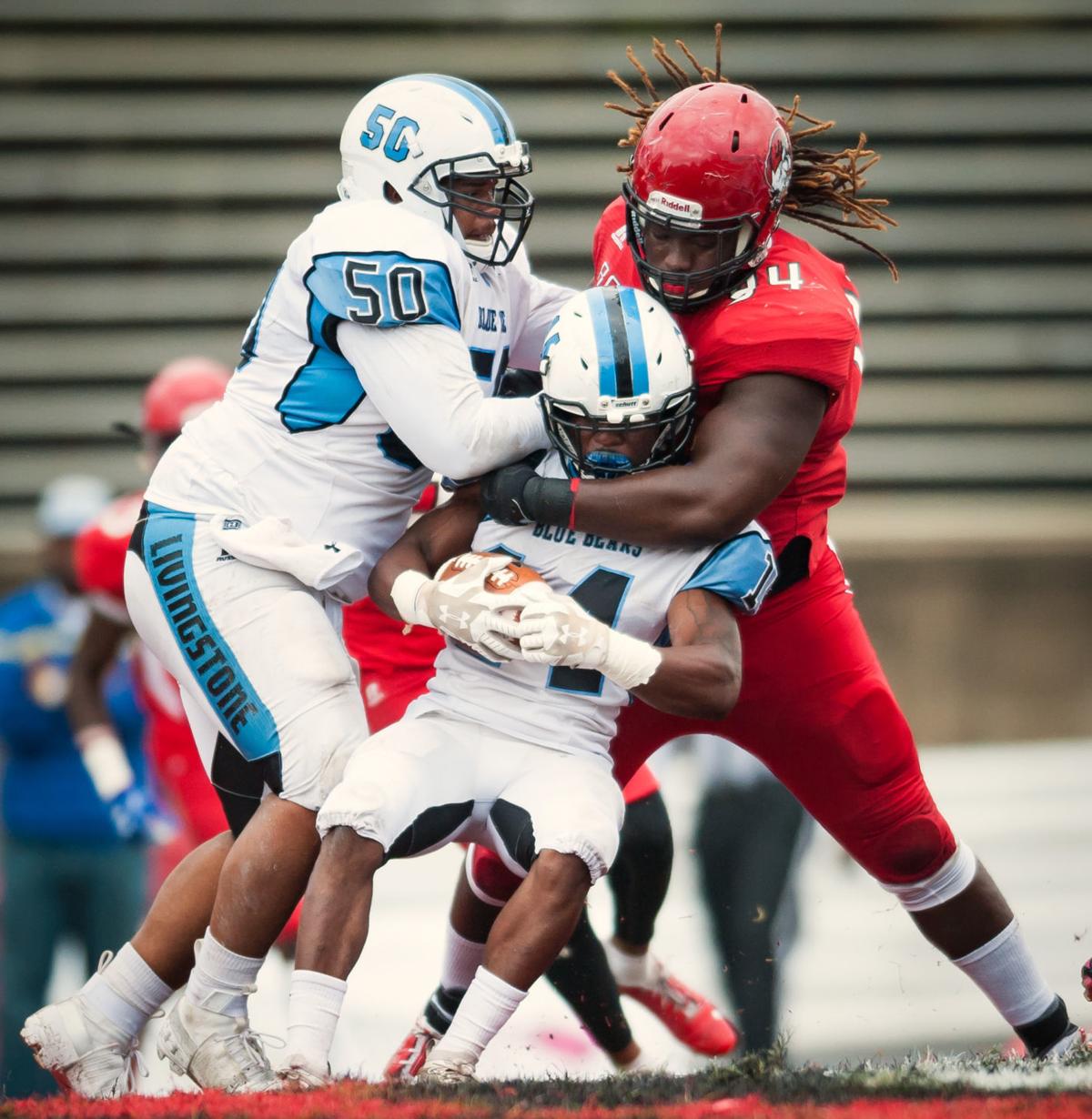 Running back Kerrion Moore didn’t grab a piece of the grass turf of Bowman Gray Stadium as he left the field for the last time.

Moore, a fifth-year senior at Winston-Salem State, probably deserves more than just a piece of the turf after he put on another show for the 8,000 plus on Saturday afternoon.

The Rams rolled to a 34-19 win over Livingstone and it was Moore, and defensive back Daryus Skinner, putting their stamps on the game.

His best run came late in the first half near midfield. He took a handoff from quarterback Dominique Graves to go left, but Davonte Adams was there waiting to wrap him up. Moore spun around, as Adams came up empty, and Moore went back to the right and found a crease up the middle of the field to take the ball 52 yards for one of the best touchdown runs of his career.

“I used to spin like that in high school,” said Moore, who now has 2,911 career yards to rank seventh on the all-time yardage list in school history. “It was just instinct on that play, but I thought the line blocked great for me all day.”

About the only scare for the Rams was when Graves limped off the field early in the fourth quarter after getting sacked. Trainers examined his left knee and applied ice, but Coach Kienus Boulware of the Rams said there was nothing serious.

“He could have gone back in but as a precaution we held him out,” Boulware said as Emiere Scaiffe played the rest of the way until Rod Tinsley, a four-year starter who will end his career as the second-leading passer in school history, was put in the game at the end to take the final two snaps as a senior.

The game had a double dose of emotion, with it being homecoming and more than 20 seniors playing their final home game.

There’s always a lot of hoopla around the homecoming game, and this one was no different. There was even a marriage proposal at halftime. She said yes.

Linebacker Pat Green, another senior, had a fumble recovery in the first half and nearly went 70 yards for a touchdown. But Green ran out of gas and was tackled at the 2-yard line.

“After about 30 yards I was sprinting and I said I better ease up right here because I’ve got a long way to go,” said Green, a North Forsyth graduate. “I lost a little bit of gas right there. We still scored after that so it was all good.”

Boulware could only smile when reminded that Green couldn’t get into the end zone after picking up the fumble that was caused by a Jarrell Bright tackle.

“He’s going to hear about that for a long time from us,” Boulware said. “I wish he could have gotten into the box on that one but we’ll take it.”

The Rams got on the board first thanks to a blocked punt by Cam Williams that Dachon Witherspoon plucked out of midair and went 21 yards for a touchdown.

The Blue Bears took a 7-6 lead early in the second quarter but Moore scored from 54 yards out to give the Rams the lead for good. A little later his 52-yard run gave the Rams a 20-7 lead at halftime.

Despite WSSU’s struggles on point-after attempts, Riley Robbins made two field goals, and Graves scored on a 27-yard run that gave the Rams plenty of breathing room.

Moore has 13 rushing touchdowns this season, and defensive back Daryus Skinner had three interceptions to increase his season total to nine, which leads all of Division II. Skinner said he had a good read on quarterback Alexis Archie of the Blue Bears, a transfer making his first career start.

“They put me in the middle of the field, and I just try to go get the ball,” Skinner said. “I don’t want anybody to throw the ball in my area. I feel like I always had a nose for the ball, but this year I’m just more comfortable and everybody on the defense is having fun so it’s been great.”

Skinner, a junior, says there was some extra pressure to make sure the seniors left Bowman Gray Stadium for the last time with a victory.

“There would have been a lot of tears if we would have dropped this one,” Skinner said. “Happily we won and now we have to look toward our next game (Saturday at Shaw). As long as we keep playing our game we’ll be fine.”

Kerrion Moore rushed for 154 yards on 21 carries and scored two touchdowns as the Rams won their third straight game.

WSSU quarterback Dominique Graves (7) throws a pass in the first quarter against Livingstone.Graves limped off the field after getting sacked early in the fourth quarter.