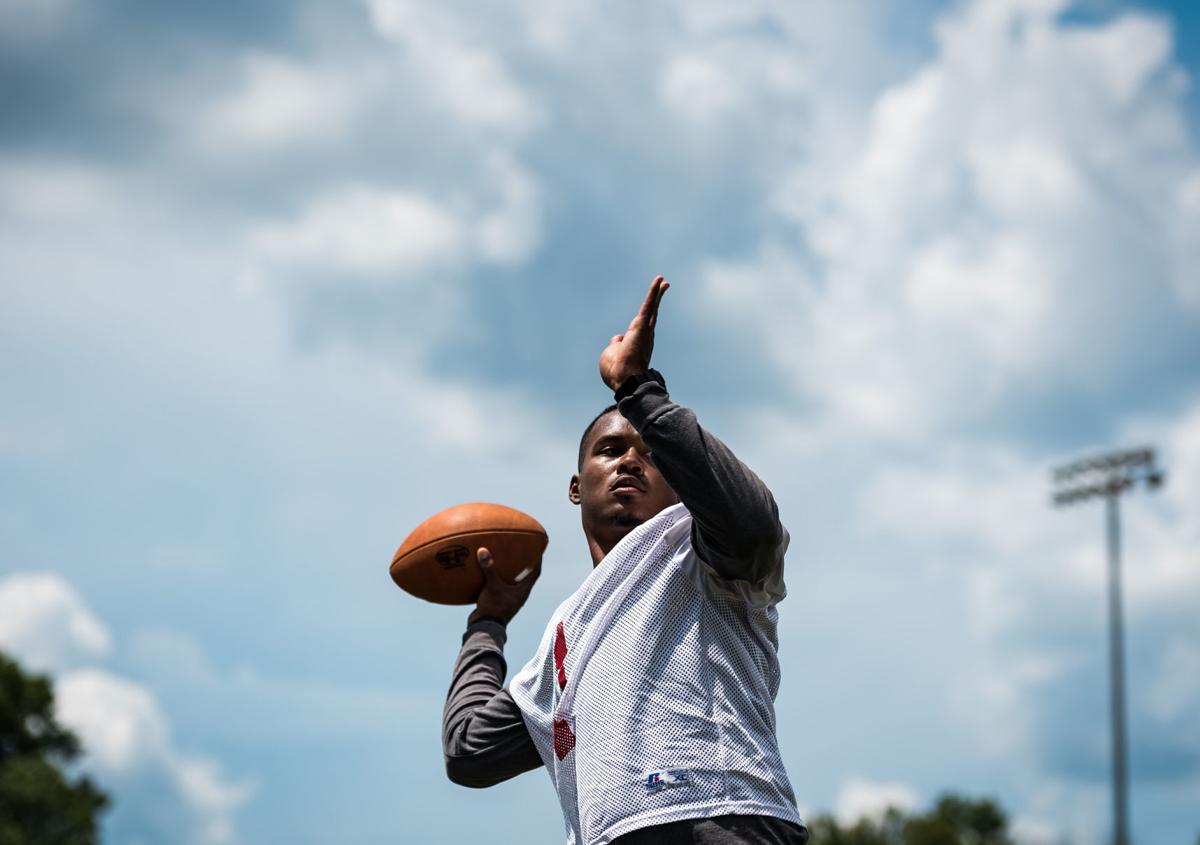 Winston-Salem State quarterback Rod Tinsley throws during the first football practice of the season Monday at Bowman Gray Stadium practice fields. Tinsley is a three-year starter for the Rams. 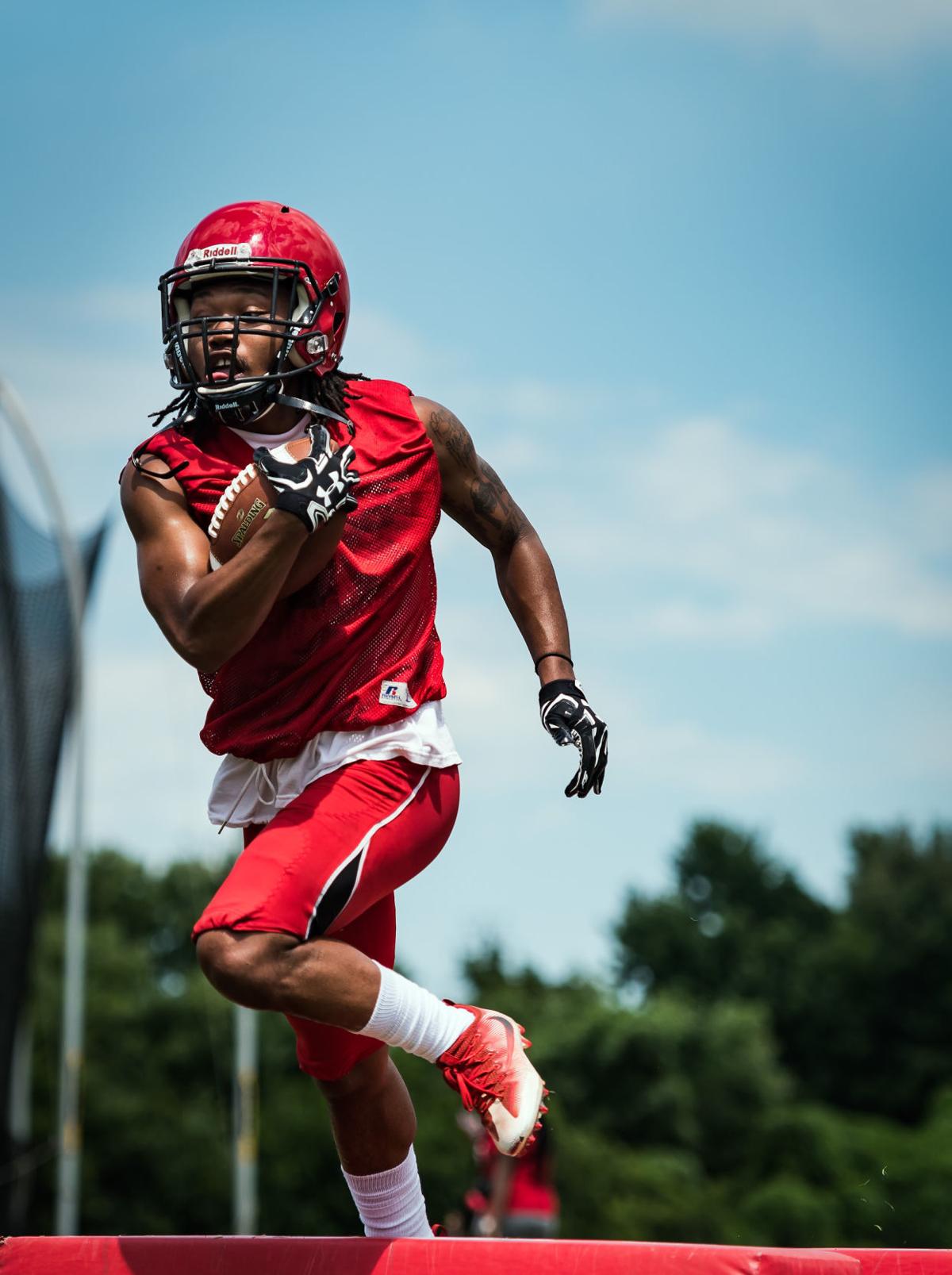 Jonathan Allen runs through a drill at Winston-Salem State’s first football practice of the season Monday. 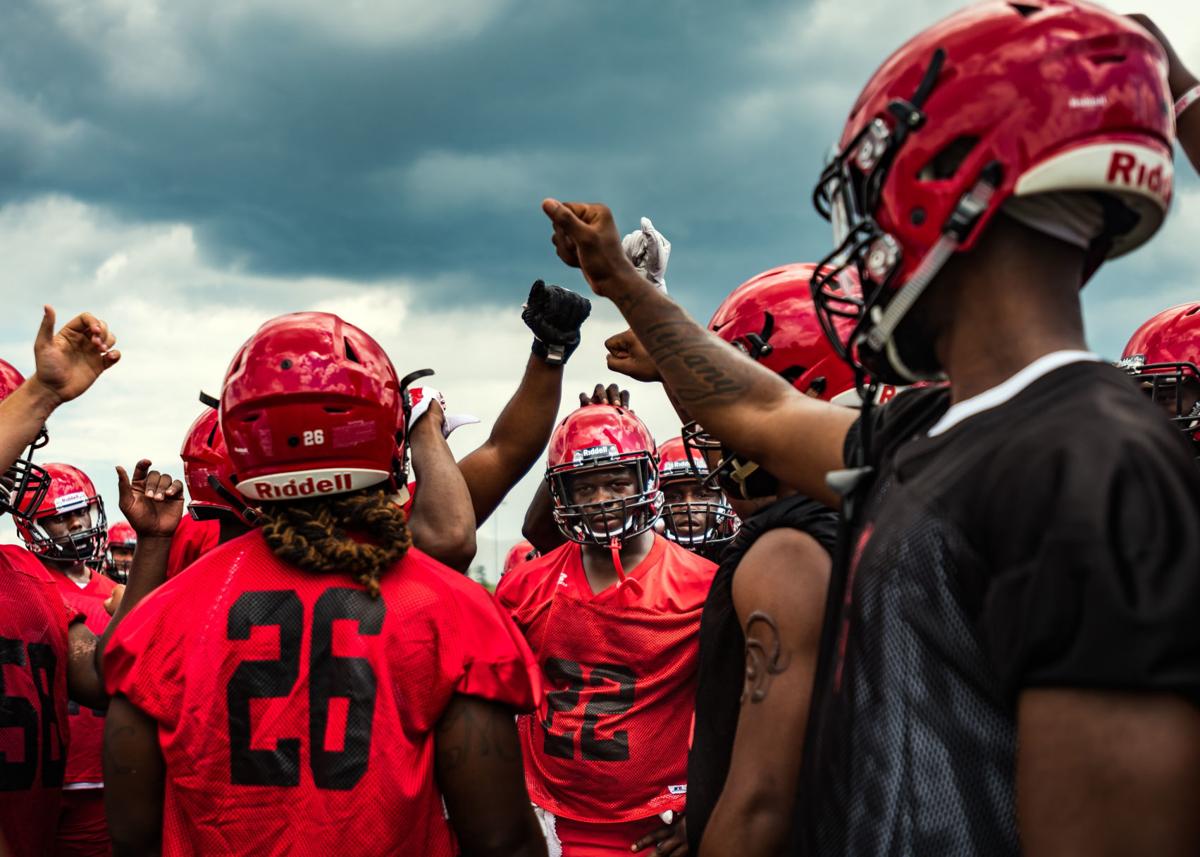 Winston-Salem State football players come together for a huddle during the first football practice of the season Monday. 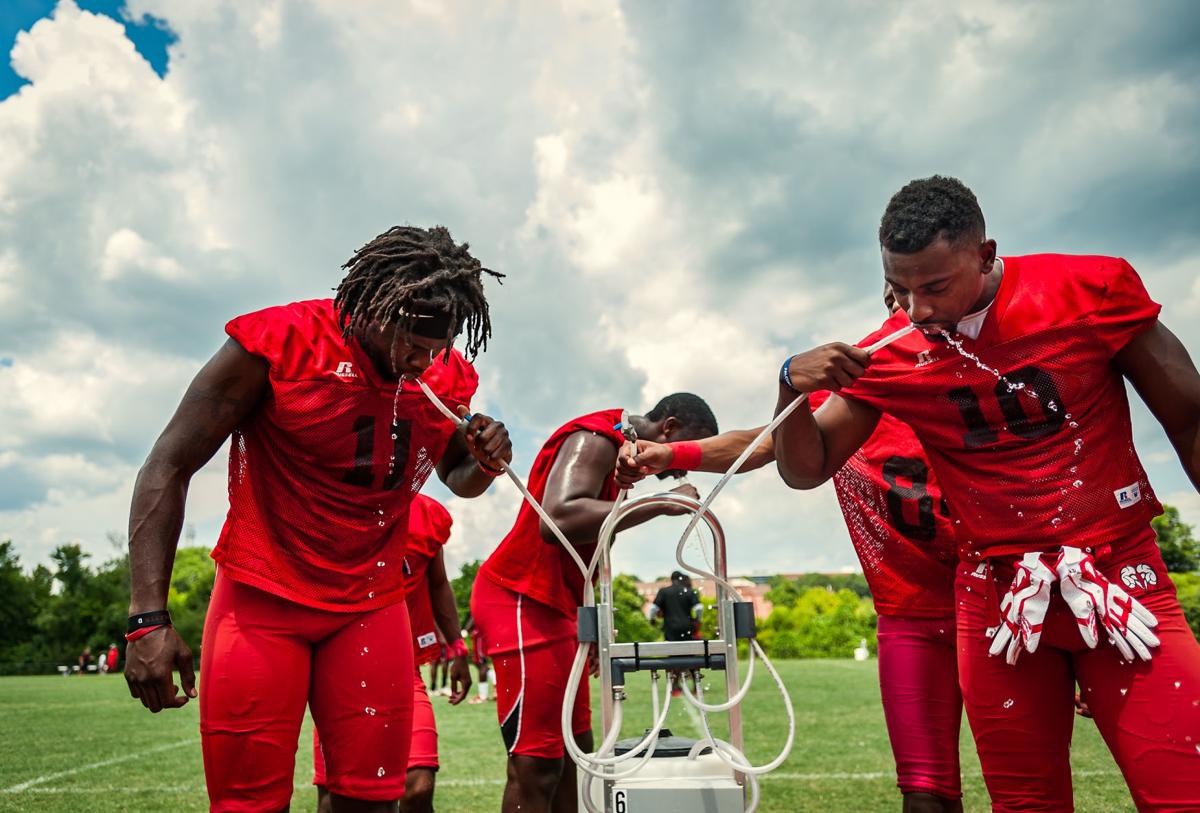 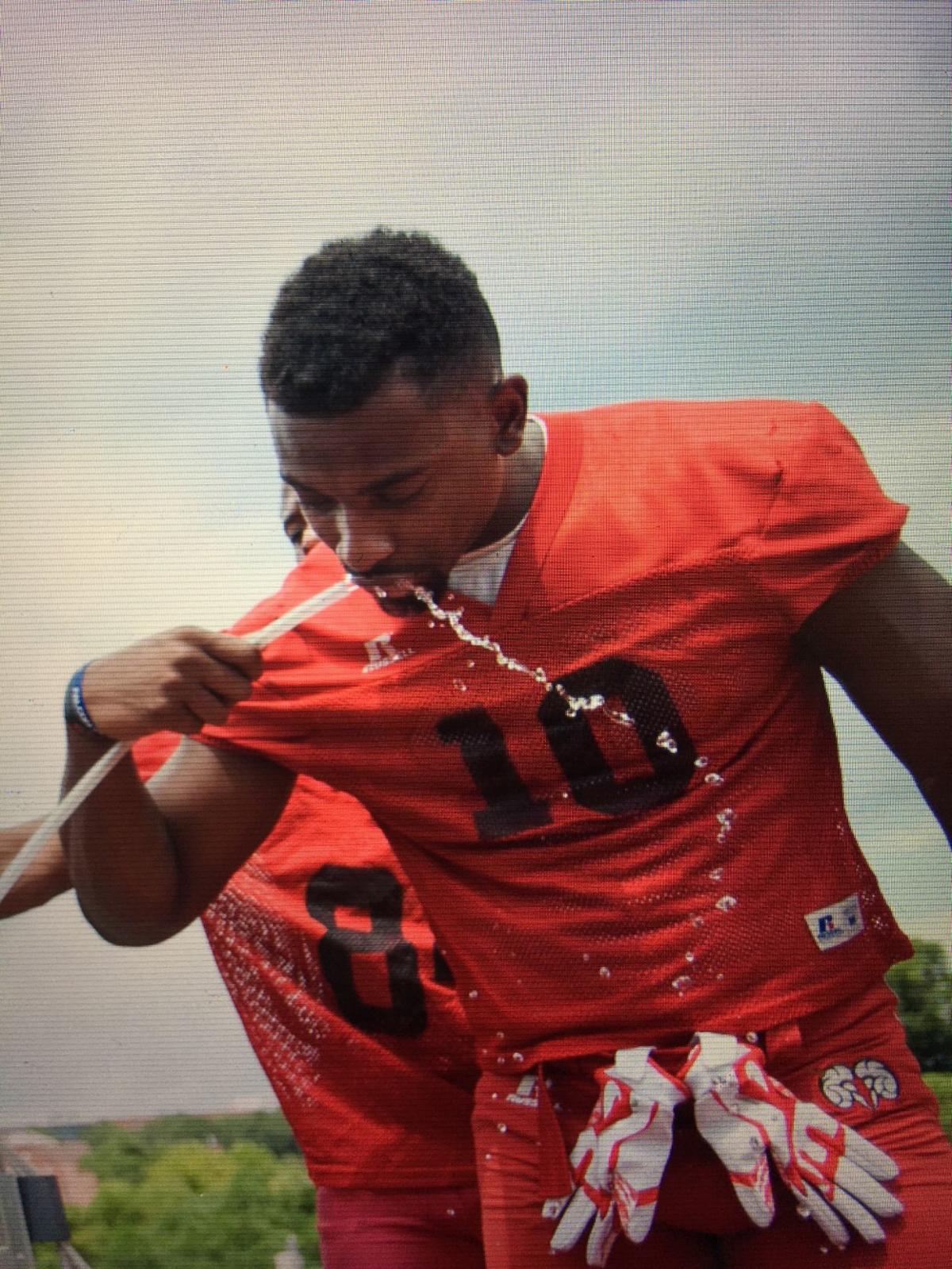 Myles Speller, a wide-eyed freshman from Durham, had no idea some of the unwritten rules within Winston-Salem State’s football program.

Soon after a 45-minute practice that was cut short by a lightning storm at Bowman Gray Stadium, he was headed upstairs in the fieldhouse on the elevator.

“Hey Myles,” an assistant coach said, “the elevator is off limits to players.”

Flashing a smile that included braces, Speller obliged and took the stairs.

Speller was one of several newcomers to the 90-player roster which went through its first college practice.

“It’s a lot different than high school,” said Speller, who played at Jordan High School in Durham. “It’s a lot more faster-paced, but I thought I more than held my own. I just want to try and get in that rotation because, here in college, you only have four years to take advantage of playing this game.”

The Rams, who went 6-4 overall in 2017 with a lackluster 4-3 record against the CIAA, also went through conditioning tests at 6 a.m., so instead of going back out on the field after the lightning delay, the team went into meetings.

Coach Kienus Boulware of the Rams watched every station of his team’s first practice from midfield and liked what he saw despite it being cut short by the weather.

“I thought it was good,” said Boulware, who is 30-14 in four seasons as a head coach. “There was a lot of energy by the players and our coaches, and you expect that here in the early going. The challenge for us is to get that consistency as we prepare for that opening game.”

Boulware said another focus of preseason camp will be competition at each position.

While Rod Tinsley, a three-year starter at quarterback, is back for his final season, freshman Dominique Graves (Eastern Guilford) will compete for playing time. Graves, who is listed at 6-foot-2 and 175 pounds, says he’s bulked up and is closer to 190 pounds.

“I hit the weight room hard this summer,” the left-handed Graves said. “I definitely wanted to be ready for this first camp.”

The other two quarterbacks in camp are redshirt sophomore Miles Timmons and graduate transfer Emiere Scaife.

Graves and Scaife, who played mostly tight end at Georgia State, are new to WSSU’s system, which will lean heavily on the running game.

Ryan McManus, the quarterbacks coach, said that while Tinsley has taken the most snaps of all four quarterbacks, the player who performs the best over the next three weeks of practice will start the Sept. 1 season opener against UNC Pembroke.

“We want the best 11 guys out there to give us the best chance to win,” McManus said. “That’s never changed.”

Another subtle change to the offense is Natrone Means will be the offensive coordinator while continuing to coach the running backs.

A good sign for the Rams is top running back Kerrion Moore, who missed the last two games of the 2017 season with a knee injury, was bouncing around at practice pretty good. After he sat out spring practice, he showed no signs of the knee injury from last fall.

Offensive lineman Justin Martinez, who had knee surgery in the off-season, was back on the field as well. He missed spring practice but will be counted on as one of two returning starters on the line.

“We’ll have a new crew out there, and we have our coach (Lawrence Kershaw) now, and we are jelling already,” Martinez said. “We have to keep jelling and keep building that chemistry.”

The Rams will also have plenty of competition on special teams. Daniel Rivera, the team’s top placekicker from last season who was 3 of 6 on field-goal attempts and 30 of 34 on point-after attempts, decided to take the year off from football, according to Boulware. WSSU also needs a new punter after the graduation of Dillion Griffith, but Devon Goble appears to be the leading candidate, according to Boulware.

“We’ve got a lot of competition going on out there, and that’s what preseason is all about,” Boulware said. “I’m just glad we are finally out here on the field.”

Winston-Salem State quarterback Rod Tinsley throws during the first football practice of the season Monday at Bowman Gray Stadium practice fields. Tinsley is a three-year starter for the Rams.

Jonathan Allen runs through a drill at Winston-Salem State’s first football practice of the season Monday.

Winston-Salem State football players come together for a huddle during the first football practice of the season Monday.