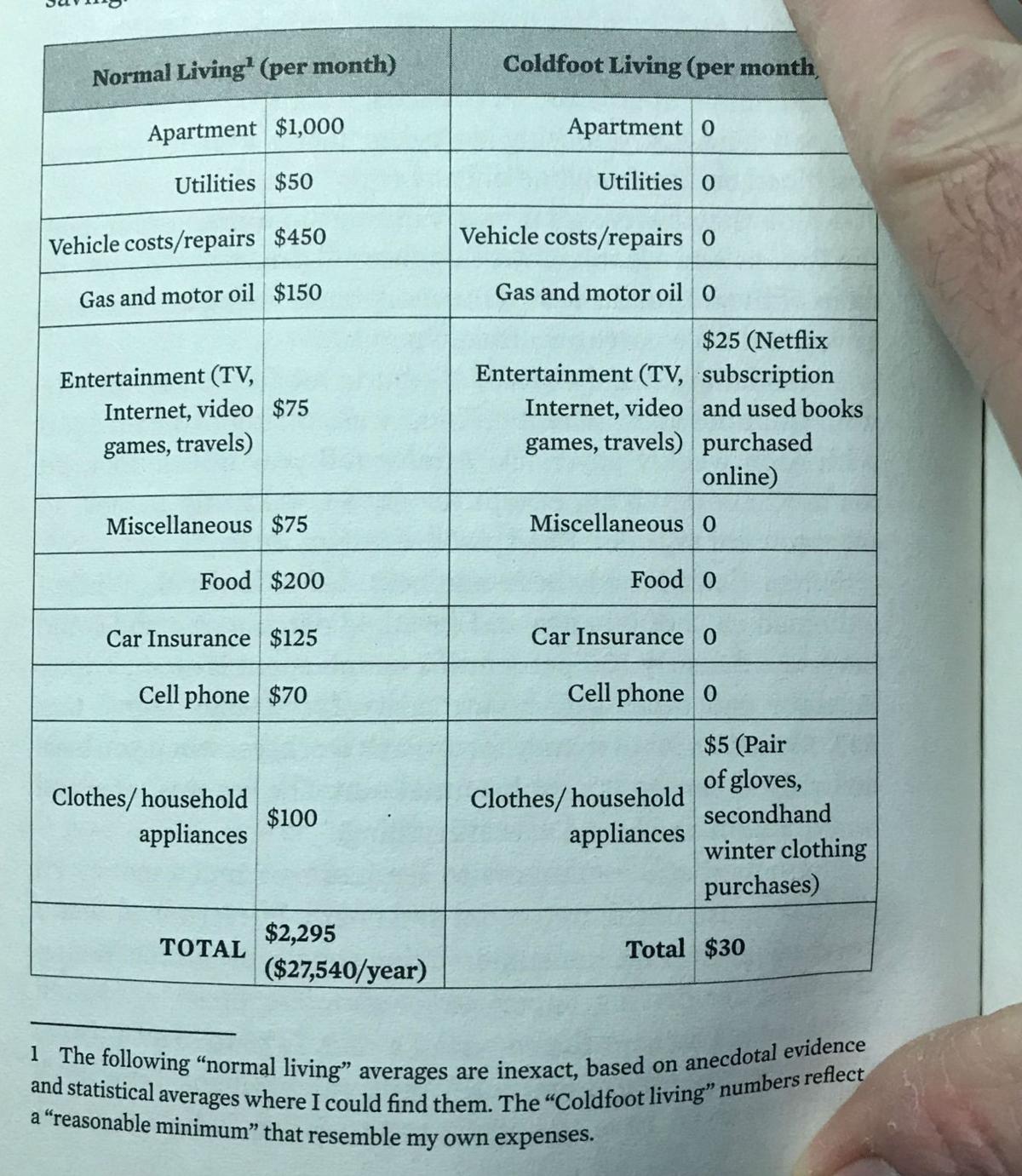 In this chart in "Walden on Wheels," Ken Ilgunas compares his actual and imagined living expenses. That's my big hand on the right holding the book open. 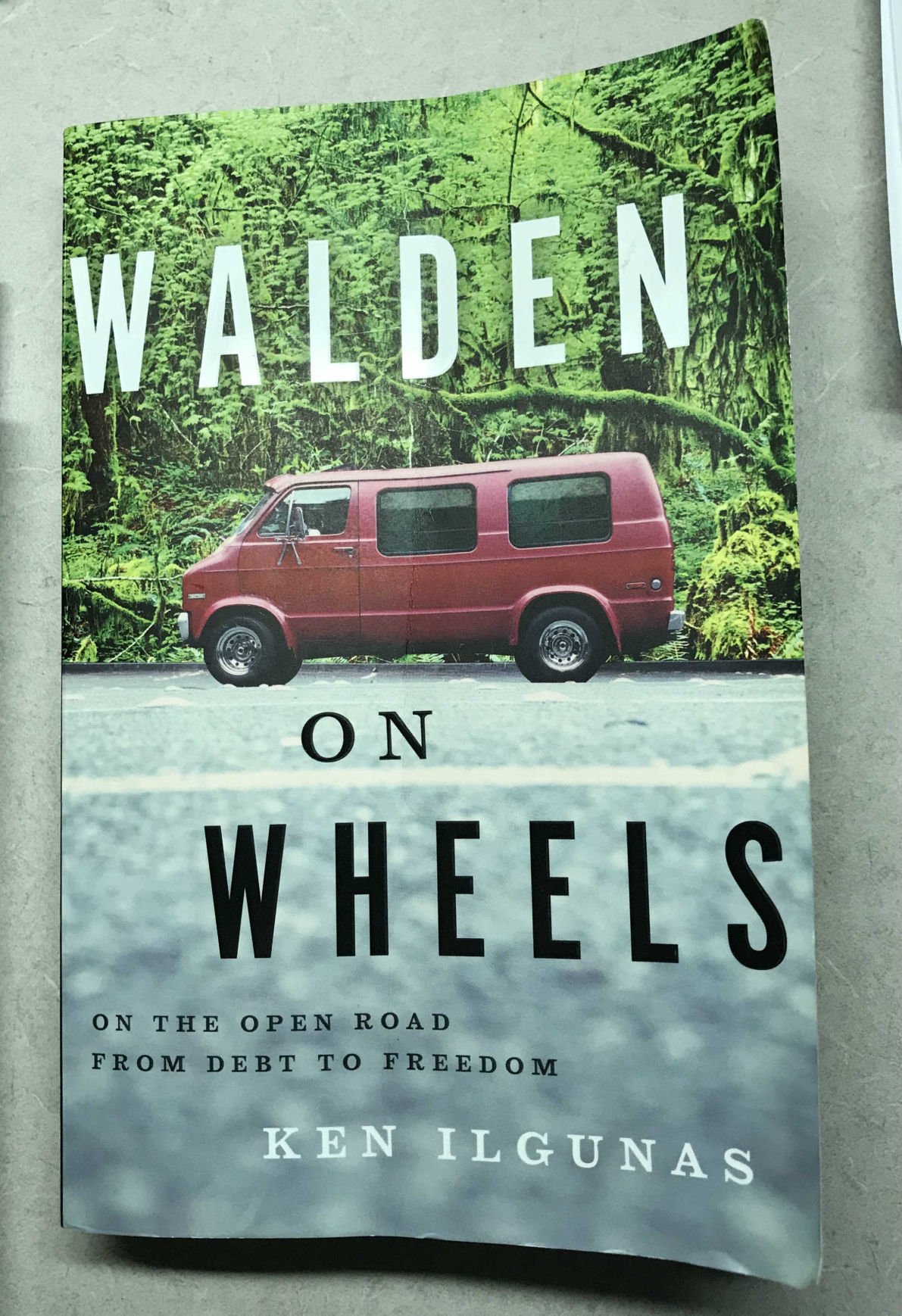 My borrowed, well-worn copy of “Walden on Wheels.”

Not long ago I read “Walden on Wheels,” a memoir by Duke alum Ken Ilgunas.

You might remember Ilgunas as the guy who lived in a van while he went to grad school at Duke.* (He got a lot of media attention for it.) Since then, Ilgunas has turn the notoriety, plus his Duke degree and some talent, into a writing career.

What I didn't know going in is that the living-in-a-van-at-Duke tale covers only the second half of the book. In the first half, Ilgunas writes about how he got into, and then out, of student debt. It turns out that this is the more interesting of the two stories he tells.

The getting-into-debt story is familiar to anyone who is or knows a recent college grad. Here is Ilgunas' version. In 2001, Ilgunas enrolled at Alfred University, a private school in western New York. (These days, Alfred U has nearly 2,000 students. Its annual cost runs about $36,000 for some undergraduate programs and nearly $50,000 for others.**)

After borrowing nearly $19,000 to pay for one year at Alfred, Ilgunus moved back home after his freshman year and transferred to the University of Buffalo, a state school about 10 miles from his parents' house. He saved a lot of money by living at home and working 30 hours a week at a big-box hardware chain. Still, by the time he got his degree, his debt has ballooned to $32,000. The goal of his post-college life, he wrote, was to “get the f--- out of debt as fast as humanly possible.”

That part of the story got me only to page 40. For the next 130-some pages, Ilgunas writes about his three-year adventure in Alaska (twice), Canada, Mississippi and Denver. He held a bunch of different jobs — tour guide, maintenance worker, park ranger, AmeriCorps crew member, UPS package handler and 18th century cos-playing Canadian explorer (as Ilgunas details here). In between jobs he hitchhiked around the country. But Ilgunas managed to pay off his debt and actually saved a few thousand bucks.

So how did he do it? The short version is that he worked and he saved. The longer answer is that he figured out a way not to spend any money on rent, and he didn’t have a car for most of that time. Here’s a chart from page 82 that detailed his expenses from his first year in Alaska:

Reducing your living and driving expenses to zero probably isn’t practical for most recent college graduates. A first-year kindergarten teacher can’t live in an elementary school parking lot, and a new account executive can’t sleep under a desk. But Ilgunas sketches out a route for anyone brave enough to follow it. It is definitely a road less traveled, and for good reason, not the least of which is that cars are expensive.

The larger question that I’ve been wrestling with is why Ilgunas and millions of others have so much college debt in the first place.

Part of it is a college pricing problem that has been covered to death. As The College Board points out in excruciating detail in one of its annual reports, college prices — both the sticker and net prices — continue to rise. At public universities like the U of Buffalo, the average published price has gone up on average 1.3 percent in one year, 30 percent over 10 years and 80 percent (!) over 20 years. The growth in average net price (tuition+fees+room+board minus scholarships+tax breaks) follows the same upward arc. What’s remarkable is that colleges are spending more money than ever before on financial aid and prices are still eye-popping. No wonder so many college graduates leave school owing so much money.

But another part — probably the bigger part, in my mind — is an income problem. Sure, things are definitely picking up. N.C. State economist Mike Walden is predicting another year of wage growth in North Carolina in 2018. Nationally, median household income recently rose to a new record of just over $59,000. Yay, right?

But you don’t have to go too far back in time to see why current graduates have such heavy debt loads. Wages during the 1990s were growing at about 5 percent per year. These days, we're down in the 3 percent range after an extended detour down into the 2s.

That median household income record I mentioned a couple of paragraphs before? The last time families took home that much money was in 1999 — nearly 20 years ago. From that peak, the typical family saw their annual income fall by about $5,000 over the course of a decade. You can’t save for college if your bank account is shrinking and all of your other bills keep getting bigger.

Ken Ilgunas figured out the math of erasing his student debt, but he had to take a pretty radical step to make the numbers work. The rest of us, meanwhile, would prefer to have a roof over our heads. Once upon a time families could afford both a roof and college bills. It shouldn't have to be an either/or proposition.

* Ilgunas lived that first year in the Mill Building Lot on Ninth Street, which sits between the redeveloped Erwin Mill and the Regulator Bookshop. The lot is still there, though I doubt Duke has commemorated the feat. After Ilgunas blew his own cover, he said Duke moved him “to a new parking spot in the middle of campus” but didn’t say exactly where.

As for Duke’s post-Ilgunas prohibition on van life, here’s Section 4.17.5 of the university’s parking regs: “Overnight or extended parking of campers, vans, buses, etc., utilized as living and sleeping quarters within campus boundaries, is not permitted unless approved by Parking and Transportation Services.” So I guess that settles that.

** New York has something called statutory, or contract, colleges, which are state-supported colleges that are part of a larger private university. Cornell University has four of New York's contract colleges (ag, human ecology, labor relations and vet medicine); Alfred U has the fifth (ceramics). These divisions are operated by a private university under contract (hence the name) for the state of New York. I hate to point to Wikipedia as a definitive source, but this entry has the clearest and most comprehensive explanation of the topic that I could find.

P.S.: Thanks to my friend RW for the well-annotated loaner copy of “Walden on Wheels.”

Have something to say about something you just read? Email me at john.newsom@greensboro.com.

The Syllabus: Your campus speakers for the rest of March

Highlights include a journalism conference at Guilford College, a Chancellor's Town Hall at N.C. A&T and the annual TEDxGreensboro.

The Syllabus: The era of the perpetual capital campaign

Western Carolina University is the latest N.C. school to go public with the news that it’s conducting a capital campaign. Here are some of the others.

It began as a crazy idea, almost idle talk between a couple of rootless, unattached, nature-…

There's a lot you can do with an English degree: teach, write or run a university.

The Syllabus: Fred Pegues goes from GTCC to your TV

The Greensboro resident, featured in the News & Record in May, appears in a new ad for frozen macaroni and cheese.

Duke University and UNC-Chapel Hill each have top-ranked graduate programs.

The Syllabus: After the ECU chancellor’s search, a refund

East Carolina University paid a search firm $110,000 to find it a new chancellor. The firm did its job — but returned the fee.

The Syllabus: What's up at ECU?

Things are busy, busy, busy at the third-largest university in North Carolina.