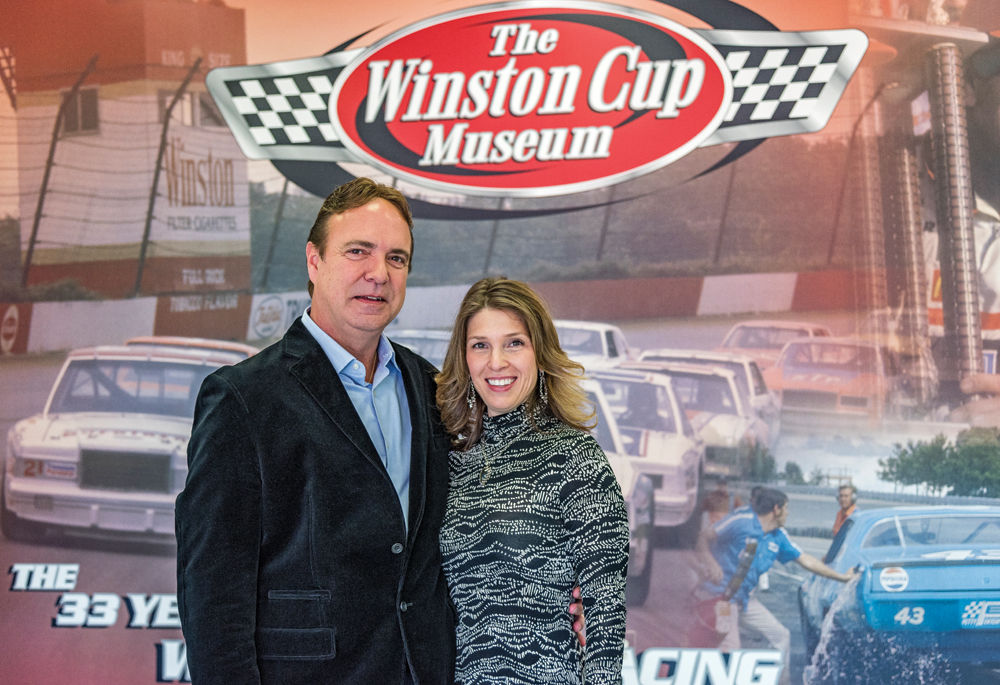 Will Spencer and his wife, Christy, opened the museum in 2005. They recently refocused its mission around special events. 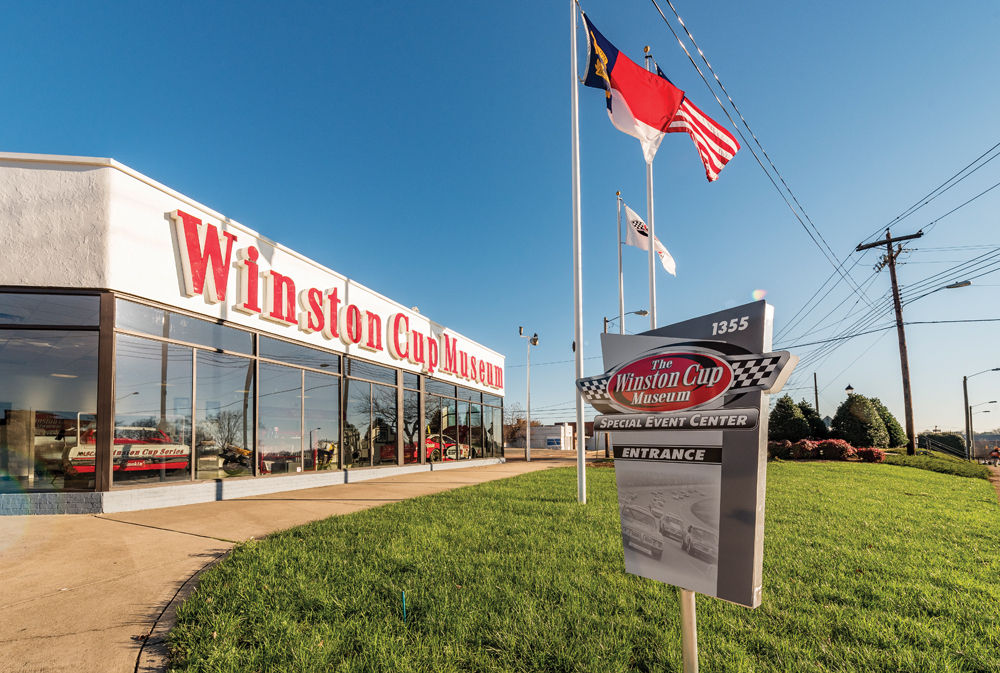 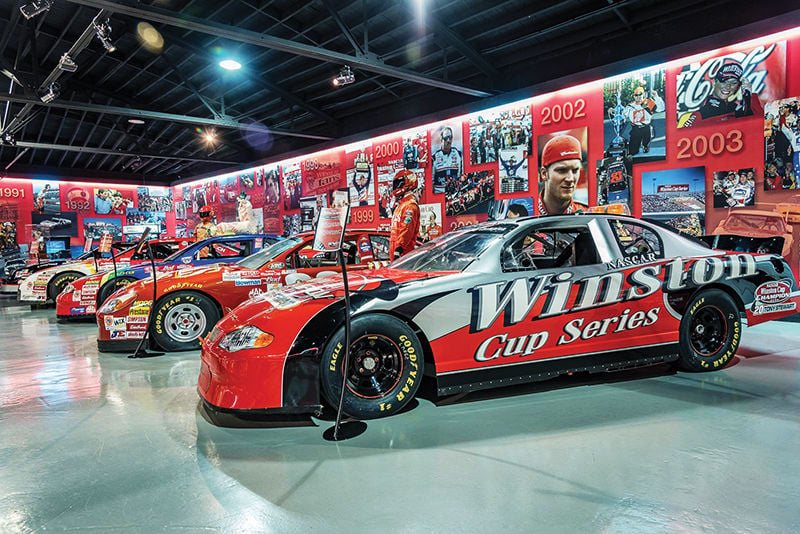 The museum’s lobby and other display areas are devoted to chronicling NASCAR’s Winston Cup era (1971–2003) and also RJR’s 33-year sponsorship of the sport.

When the Winston Cup Museum opened in May 2005, owner/founder Will Spencer said he wasn’t looking to make money.

“I wanted to give something back to the city of Winston-Salem as well as preserve the 33-year history of Winston Cup racing because it had such a positive impact on me and my business,” says Spencer, a Forsyth County native.

With nearly 12,000 feet of exhibit space, the museum serves as a memorial to the Winston Cup era of NASCAR racing (1971-2003). It’s located on a one-acre tract at 1355 N. Martin Luther King Jr. Drive, right beside where Spencer’s JKS Motorsports buildings still exist. (JKS moved to Lexington a few years ago, but Spencer still owns those buildings). Inside you’ll find an array of displays, exhibits, photographs, and memorabilia reflecting the golden age of stock-car racing.

The museum quietly stayed open until December 2014, when Spencer decided to halt operations. Attendance had dropped 65 percent over a five-year span, and he felt a new direction was needed. “When the museum opened, I said we’d go 10 years then see if we needed any changes,” Spencer notes.

One of the changes he made was the name. He reopened the museum last fall as the Winston Cup Museum Special Event Center, highlighting its event-hosting capabilities. Spencer worked with the City of Winston-Salem to rezone the area and make it a part of the nearby Downtown Entertainment District so he could do outdoor events and hold special events. In December, for instance, the museum hosted a special Pearl Harbor veterans’ coffee, and it later hosted the Town of Rural Hall’s awards ceremony and retirement banquet for longtime fire chief Eddie Horn.

“We want to do car shows and flea markets in the museum, and we might hold (outdoor) movie nights,” Spencer says. A portable stage and a big-screen television could be installed there as well.

With a capacity of 280 people, the museum can host just about any event imaginable: weddings, birthday parties, corporate events, fundraisers, family reunions, concerts, sporting events, and more. Everything you’d need for a party is available to rent on-site—tables, chairs, dinnerware, tents, etc.—and the staff works with several local catering companies to supply the food, including Golden Apple, Rainbow Catering, and Camel City BBQ.

The focus on events isn’t the only big change. The museum will soon have interactive games also, and Spencer is working with a Greensboro company called Pixels on an application that visitors can download to their smartphones and other devices. The app would allow visitors to hear the words of longtime broadcaster Mark Garrow and also learn more about the Winston Cup racing era.

“If you don’t have technology to keep young people interested, you won’t survive long,” says Christy Spencer, Will’s wife and museum publicist. Along with Will, she’s overseen a redesign of the museum’s website and updated its Facebook page.

The modern enhancements complement the space’s nostalgic displays and memorabilia. The museum has a total of 23 race cars on display—some of them with working race engines. A wall on the left side of the museum provides a pictorial history of the Winston Cup era, starting with the first era champion, Richard Petty in 1971, and ending with the last, Matt Kenseth in 2003. In the podium area, visitors can see the first-ever Winston show car, which featured driver T. Wayne Robertson (who later ran Winston’s Cup program).

There’s still a visible connection between the museum and Reynolds Tobacco Co., partly because of its proximity to the Reynolds American building. Spencer is quick to note that Winston (the cigarette brand) was instrumental in pushing NASCAR’s highest division and short tracks, such as Bowman Gray Stadium and South Boston Speedway, to greater success.

“So much has happened in those 33 years,” Spencer says of the Winston Cup era. “If you look at where NASCAR was in 1971 when the sponsorship started compared to where it was when it ended in 2003, it’s really amazing. I had been thinking about some sort of a museum for some time. But in 2003, when RJR decided to get out of NASCAR, the idea had a purpose.”

The museum has a small number of employees. Christy is the behind-the-scenes “bill-payer and numbers girl.” Bill Soper has long been the museum curator. Bruce Bullings was recently hired as the museum’s event coordinator. And Bill Harrelson, a longtime RJR employee and a big race fan, rounds out the crew. Together, they’re working to implement the museum’s new mission while staying true to its Winston Cup roots.

At the end of the day, the space still serves as an enshrinement to the era’s greatest drivers: Dale Earnhardt, Richard Petty, Bill Elliott, Cale Yarborough, and others.

“Race fans all love the (Winston Cup) era,” Spencer concludes. “There’s interest in it because (racing) was just more exciting back then.”

What will visitors find inside the Winston Cup Museum? Here’s a quick rundown:

More Info: Group rates and tours are available by appointment. For events, rentals, and tour info, call 336-724-4557 or go to winstoncupmuseum.com.

Wearing masks is the new normal but some of us like to wear a face covering with some style or bling. To that end, artists and craftspeople ha…

Bryce & Ehsan, with help from Moo, tie the knot in Chapel Hill

Omni Grove Park Inn went from a vacation spot to the start of a lifetime together for Bryce and Ehsan, after he surprised her with a proposal …

Will Spencer and his wife, Christy, opened the museum in 2005. They recently refocused its mission around special events.

The museum’s lobby and other display areas are devoted to chronicling NASCAR’s Winston Cup era (1971–2003) and also RJR’s 33-year sponsorship of the sport.