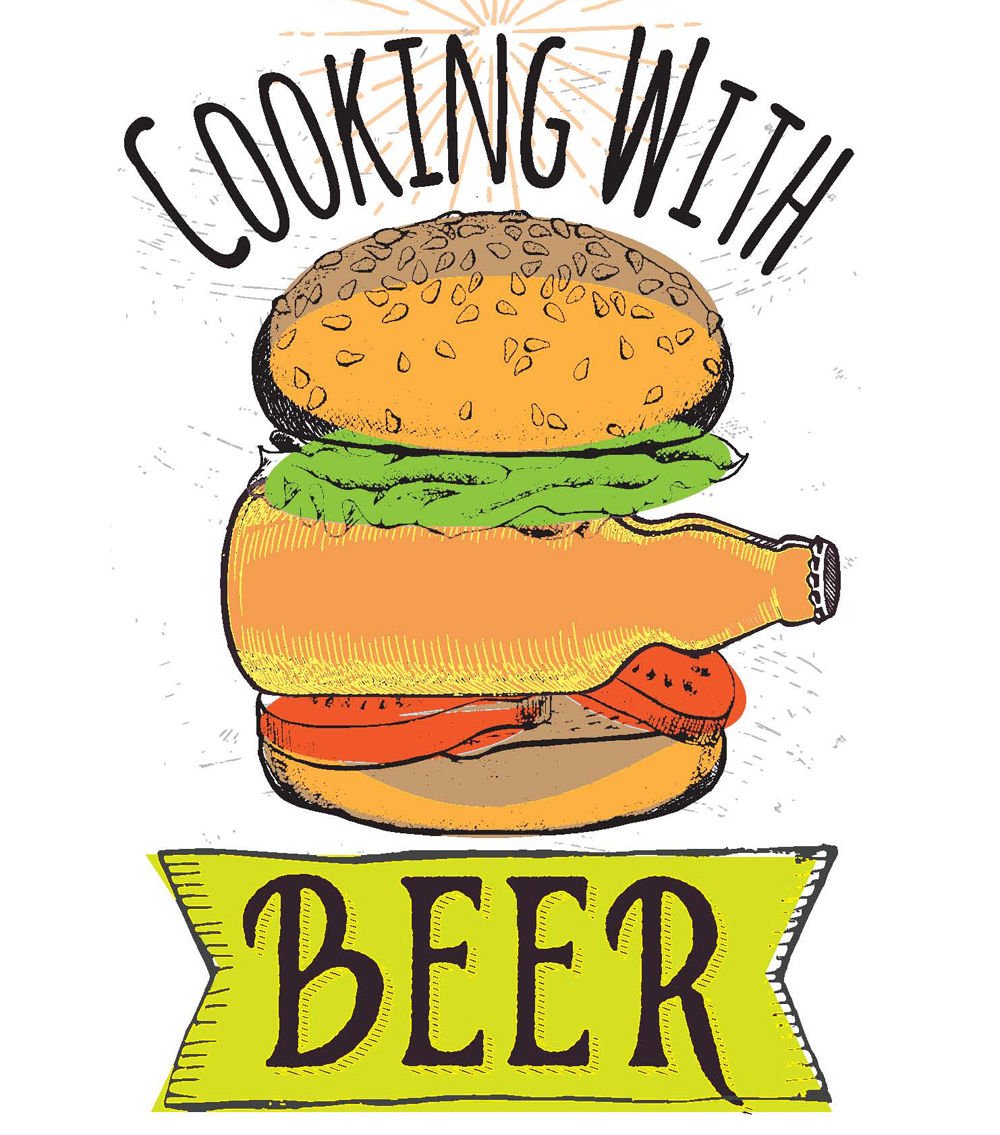 Tim Nolan, house manager at Hoots Beer Co., pours himself a stout and takes a sip. Bread in a glass, he says.

“It’s made up of all the essential components of bread,” he says. “And bread goes well with any meal.”

So it makes sense, he contends, that beer would find its way into a number of dishes.

In the Camel City you can treat yourself to a pint or you can have your pale ale or stout on your burger or in your wings, as area chefs incorporate local brews into their recipes.

The Porch, Kitchen & Cantina, next door to Hoots, has used some of the brewery’s creations for barbacoa, beer-battered fish tacos, and baked beans. At Small Batch Beer Co., beer cheese and beer floats are on the menu. And at Foothills Brewing, chef Shane Moore is in constant experimentation mode, whipping up everything from hop oils to beer cakes.

“You can experiment with all the different steps of brewing,” he says. “I’ve experimented with using wort (the sugary, unfermented brew that will eventually become beer) as a cooking liquid. We’ve fed spent grain to cows and had the meat sold back to us. There are unlimited possibilities, and every day [chefs] are making something new and different.”

Many home cooks, Nolan says, have stood over a stove, beer can in hand. They look at what’s on the burner, look at the beer can, and figure ‘Why not?’

“You can deglaze with it; you can impart some really comforting flavors,” he says. “You get a little flavor from the barley and the grains that were used in [the brewing process], and you get a little sweetness, too.”

Beer makes for a good meat tenderizer. Its carbonation also makes for lighter batters with crisper textures. And it adds complexity.

“There is a huge array of flavors you can pull from beer,” Hoots co-owner Eric Swaim says. “If you’re working with something hoppy like an IPA, you get a lot of citrusy, floral flavors. If you have something dark, you get chocolate or coffee roasts.”

Hoots, which opened in 2013, doesn’t have a kitchen attached to its pub on Mill Works Street. But Clay McGuire, kitchen manager at The Porch, regularly tests out the brewery’s creations in various dishes.

At Small Batch, diners can have their beer in their sweets, as the brewery offers beer floats that pair ice cream and stouts. Small Batch also has beer cheese, beer mustard, and beer chili on the menu. “It’s just a matter of choosing the right type of beer,” says owner Tim Walker. “There are so many different types of beer. We like our session amber beer or blonde ale in the beer cheese, because they’re mild. If you used an IPA, it would be overpowering.”

Chef Carol Kenley at The Quiet Pint spoons some stout beer bacon jam onto a burger topped with beer-battered jalapeños and pimento cheese. “You’ve got different styles of beer to complement different styles of food,” she says. “Like with the jam, the stout is going to accentuate all the ingredients. And it’s fun to cook with.”

Over at Foothills on Fourth Street, a plate piled high with puffy, golden onion rings brats, quesadillas, barbecue sauces, and a number of other items that Moore is perpetually tinkering with. In the kitchen, he pulls out a corned beef brisket that’s been cooking in Carolina Blonde ale, peels back the foil covering it, and tears away a few strands with a fork. The meat is tender with a bit of hoppy bitterness.

“With a lot of recipes that don’t call for beer, you can just substitute it in,” he says. “If it calls for water or any kind of liquid, you can substitute beer, and it works great.”

He’s used wood from old bourbon barrels to smoke meat. He’s made dog biscuits from spent grain (used in the making of beer). He even once issued a challenge to his co-workers to bake cakes with the brewery’s libations. And he’s always keeping an eye on what the brewing team at Foothills is doing.

“The great thing about working here is that I can always grab the newest beer and have it before everyone else—like a sneak preview—and I can start experimenting with the beer in the kitchen. I put my head back there and harass the brewers; I’ll ask them, ‘What’s next? What’s next? What’s in that tank?

Five beer-inspired recipes to try in your own kitchen.

DIRECTIONS: Mix together until well incorporated.

DIRECTIONS: Mix together until well incorporated.

DIRECTIONS: Pour beer and pimento cheese in a pot over medium heat. Stir until melted, being careful not to burn or boil. Add in cheddar cheese and stir until melted.

DIRECTIONS: Preheat oven to 400 degrees. In a processor, add flour, baking powder, baking soda, salt, and sugar. Pulse to combine. Add the cold butter, process until well combined. Transfer to a large bowl. Add the buttermilk and beer. Mix with a fork until just combined. Transfer to a well-floured flat surface; pat into a rectangle. Use a rolling pin and gently roll into a large rectangle. Gently roll into about 1½ inch thickness. Use a biscuit cutter and cut out 8–10 biscuits. Place in a baking pan that has been sprayed with cooking spray or lined with parchment paper. Bake at for 10 minutes or until the tops are golden brown.

Courtesy of the Beer Institute

The following establishments, all mentioned in the story, include a mix of beer-infused items.

Wearing masks is the new normal but some of us like to wear a face covering with some style or bling. To that end, artists and craftspeople ha…

Bryce & Ehsan, with help from Moo, tie the knot in Chapel Hill

Omni Grove Park Inn went from a vacation spot to the start of a lifetime together for Bryce and Ehsan, after he surprised her with a proposal …