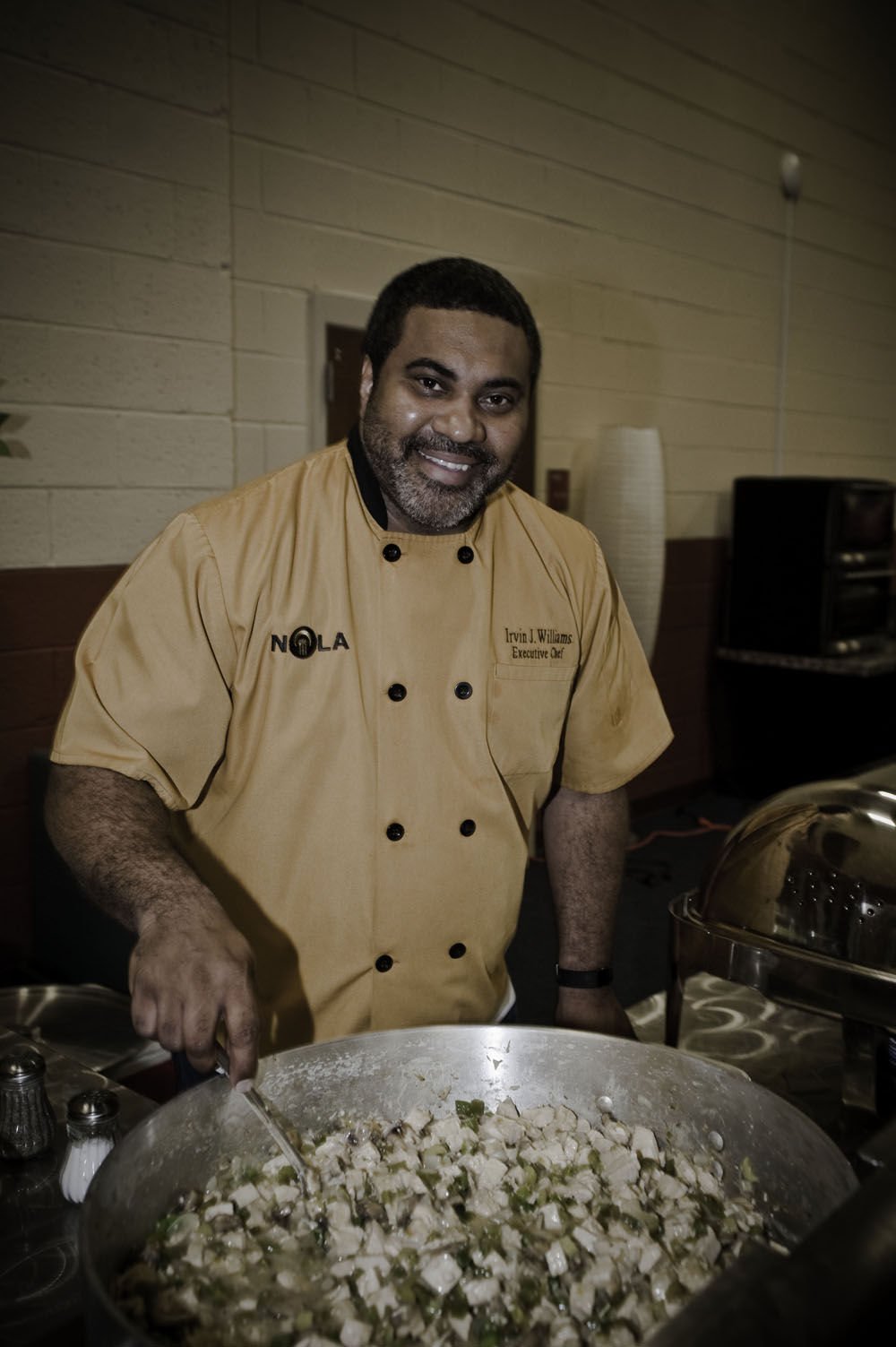 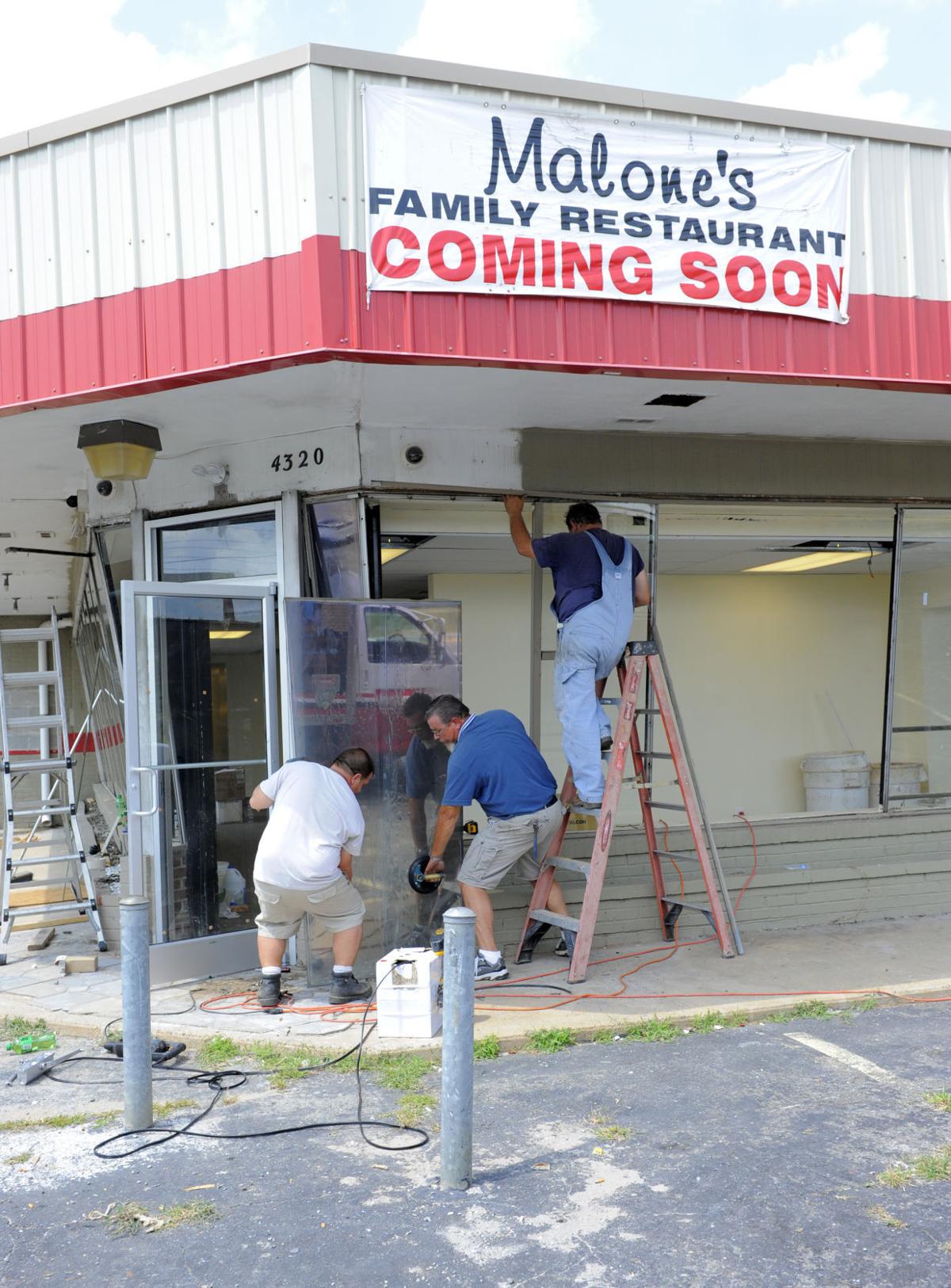 Williams has been hired as the head chef at Malone’s Restaurant in Ogburn Station, seen here in 2015.

If you’re a fan of the Food Network, then you may recognize chef Irvin Williams Jr. from Cutthroat Kitchen. He’s appeared on the reality cooking show twice—first in Season 9 on the “We Came, We See-sawed, We Conquered” episode, which originally aired Sept. 27, 2015, and again during heat one of the “Tournament of Terror” on Sept. 28, 2016. Hosted by celebrity chef Alton Brown, the show pits professional chefs against each other in a no-holds-barred cooking competition. They often have to overcome obstacles and, at times, sabotage their opponents to win.

“The show wants chefs with personality; just being able to cook isn’t enough,” Williams says. Talent scouts found him through social media and put him through a rigorous vetting system before he had a Skype interview with the producers. “But once you’re picked, you’re in the circle,” he says.

Williams, the owner of Nola Catering, keeps his plate full by design. As an entrepreneur, he also sells a custom line of spices, meals to go, and has written a cookbook that tells his story with more than 100 recipes. To him, juggling multiple duties is the essence of what it means to be a chef—a manager of people, buildings, food, and products, who also knows how to cook.

Born in New Orleans, Williams joined the Navy after high school and served in the Persian Gulf War. He was going to become a dentist, but then he dropped out and chose to pursue culinary arts, winning a scholarship to Johnson & Wales and then the Culinary Institute of America in New York. He earned a business degree while on deployment. Since starting his business in Louisiana, he has traveled extensively and now works in all 50 states. In 2003, he and his family moved to the Triad and now live in Thomasville.

Williams has held a variety of cooking jobs since arriving in North Carolina. He’s served as the director of catering at UNCSA, catering manager at Wake Forest, and was also the banquets manager for the former Adams Mark Hotel in downtown.

In recent weeks, Williams began helping out at Malone's Family Restaurant in the Ogburn Station area, working on a volunteer basis as the restaurant gets back on its feet.

We caught up with Williams recently to chat about his cooking style, his time on Cutthroat Kitchen, and his focus on healthy eating.

What was it like to be a contestant on Cutthroat Kitchen?

“It was fun to do a couple times, but I wouldn’t want to do it forever. I like going and having fun, and I like to be caught off guard with the cooking challenges. Of course, if they call and it’s me against Bobby Flay, I’m going. I’d rather play with the big dogs.”

What’s your favorite food to cook?

“I love cooking every type of cuisine. But being from New Orleans, I try to include the ‘holy trinity’ in everything I cook (onion, pepper, celery). I infuse different flavors depending on whether I’m making Indian, German, or Japanese food, and I twist food every way possible. Learning about different cultures helps me understand where food came from. Take gumbo for example; most people think it was created in Louisiana, but it was actually brought here from Africa and blended with French and Spanish influences in Louisiana by black cooks.”

Your blog focuses on the health benefits of food. What’s your inspiration?

“I’ve always been concerned about my friends’ and family’s battles with their weight, and I’ve even struggled with it myself. I’m trying to educate people about saturated fat, calories, and eating right. It’s not as expensive as you’d think. If people would add up what they spend on fast food, they’d see that eating healthy is actually cheaper.”

Is physical health the only reason for people to eat well?

“Absolutely not … in my new book, The Art of Seduction Through Food, I focus on the sensuality of food and cooking. Eating well improves our emotional state by improving our confidence and self-esteem. Food plays such a big part in our life, so why not make yourself feel good through food? When we feel good, our relationships are healthier.”

Williams’ spices, catering packages, and cookbooks are all available at nolacatering.info.

Williams has been hired as the head chef at Malone’s Restaurant in Ogburn Station, seen here in 2015.