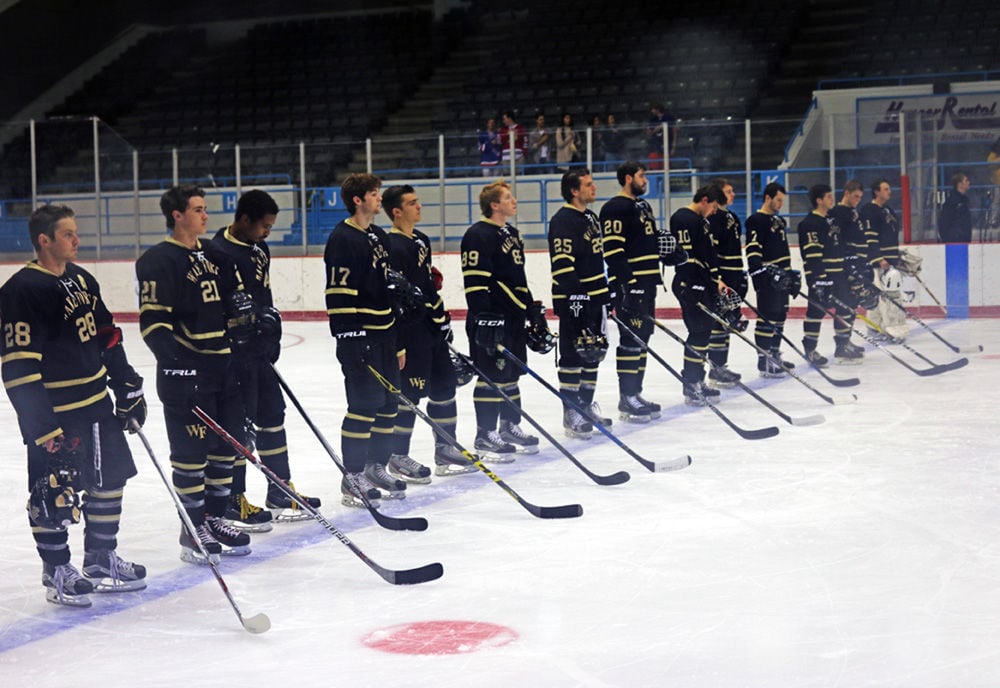 Members of Wake Forest's club hockey team line up before a game against Elon University at the Fairgrounds Annex. 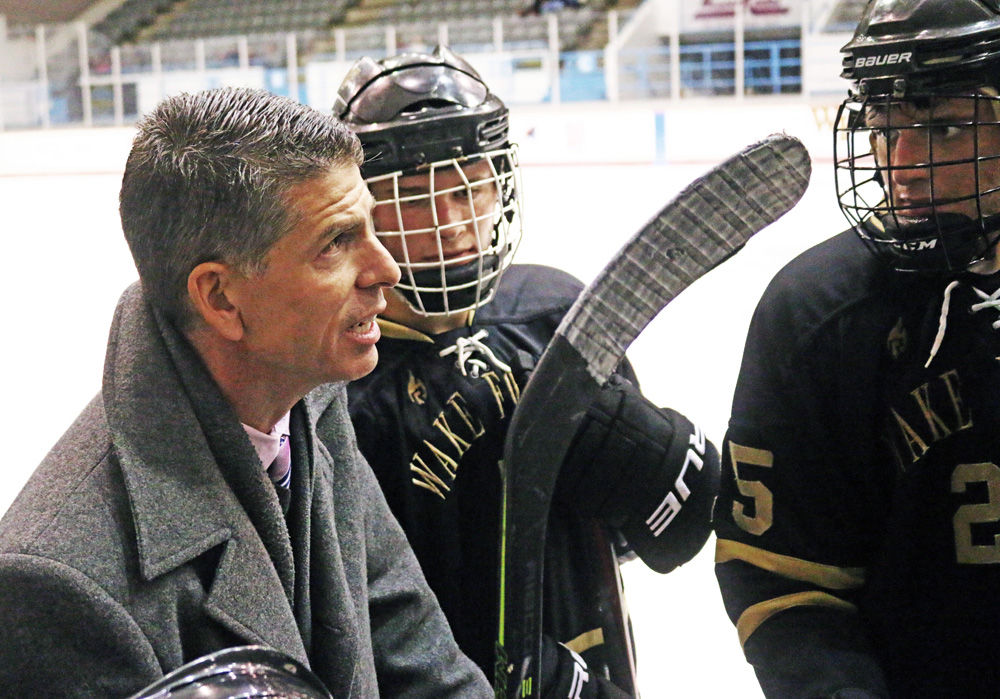 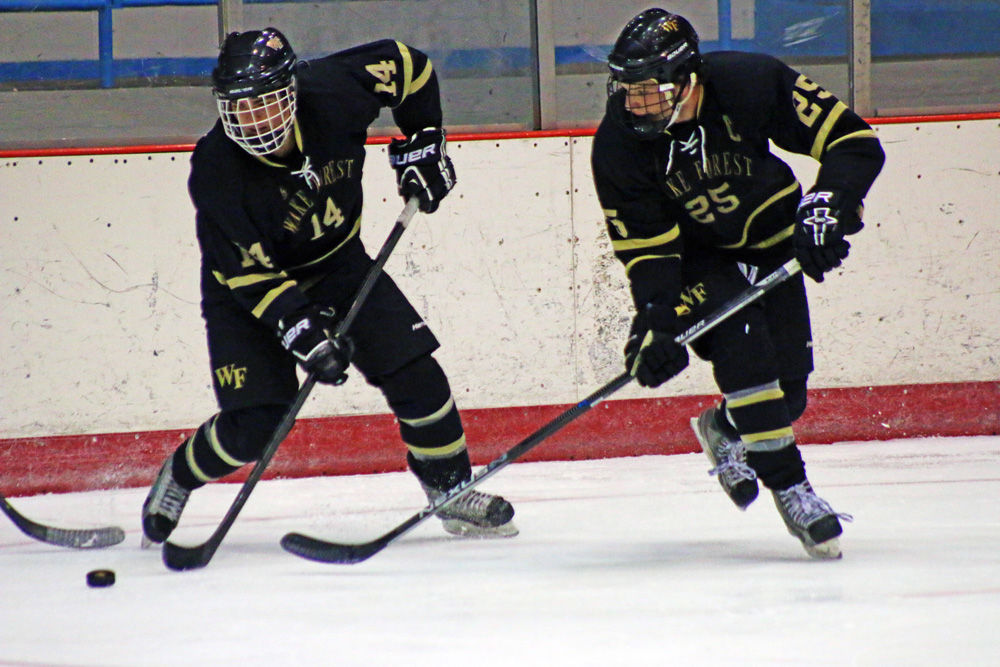 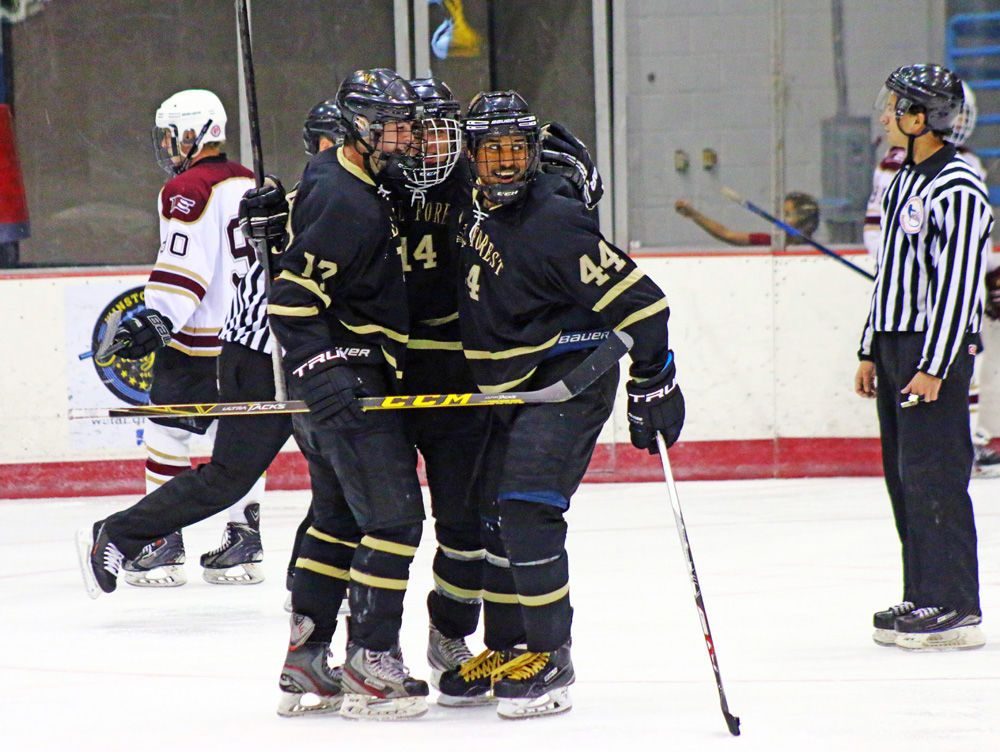 Anyone who has seen ice hockey live would feel right at home on this late evening in the Winston-Salem Fairgrounds Annex.

It’s cold, naturally, and the Zamboni is on the ice. A couple dozen young men enter the rink and start skating around, their conversation drifting from final exams to frat parties to travel plans. Most are dressed in black pants and black, white, and gold jerseys.

After a few minutes, the head coach enters the rink and sounds the whistle. The players cut off their conversations and circle around their leader, ready to begin the evening’s practice. It’s a little after 9 p.m., and the team only has the ice reserved for an hour, so they know every second of practice is important—especially when you’re trying to protect an eight-game winning streak.

None of the players on Wake Forest’s Club Hockey team are on scholarship. The student-run group isn’t considered a varsity-level sport, so the team relies largely on player fees and public fundraising to support their mission.

With two practices a week, team members are forced to balance their campus commitments with their sport. But as forward Tyler Potts notes, “If you really want to play, you’ll find a way.”

Potts is a graduate of Green Hope High School in Raleigh and John Carroll University in Cleveland. He enrolled in Wake’s law school this past fall and immediately found a home with the club hockey team. He is one of two Southerners and the only black member on the squad.

While in high school, Potts played hockey for Team Carolina—now known as the Junior Hurricanes—with players from Charlotte, Raleigh, and Charleston, S.C.

“(Hockey’s) very big in the Raleigh area,” he says. “You have the Carolina Hurricanes, and there are a lot of Northerners in the Cary area. There are seven or eight rinks in Cary alone.”

Among the other players is team president Joe Macy, a senior from Long Island, N.Y., who’s double majoring in history and political science. It’s Macy’s job to handle all the administrative duties including scheduling games, organizing travel, balancing budgets, and filling out paperwork for insurance.

“Running a club team is like running a small business in some ways,” he says. “We have a large budget, and I’m hoping it’ll teach me how to manage a business. It’s good professional experience for myself, and it’s a chance to give back to the university.”

Macy says he’s also a liaison between the coach and the team.

All of the coaches, including Head Coach Dave Pasquale, work on a volunteer basis. Pasquale played hockey for two years for Bentley University in Massachusetts. His assistants are Kelly Curl, who grew up in Greensboro, and student assistant Corey Hucker.

“We have some kids on our team who could easily play NCAA Division III hockey,” says Pasquale, 46. “We have a couple who could definitely play Division I.”

The team’s history is incomplete, but it began play in 1977 in a league that included the “Big Four” North Carolina schools and Virginia. It played in the Blue Ridge Hockey Conference for a few years before joining the Atlantic Coast Collegiate Hockey League (ACCHL) before the 2013-2014 season.

The games can range between Annapolis, Md., and Charleston, S.C., although Wake’s division includes closer teams such as UNC Charlotte, N.C. State, Elon, and High Point.

Last year’s team finished with a record of 9-7-1 (the best mark in program history), and this year’s team appears to be even stronger. At press time, the Deacons had a sterling 11-2-1 record and had reeled off eight straight wins, their longest winning streak in history. They also placed 2nd out of 13 teams in the ACCHL Kick-Off Tournament this past fall.

Along with Potts and Macy, the Deacs are led by freshman sharpshooter Matt Solviletti—who leads the team with 16 goals—and junior Scott McKean, who is tied for the team lead in points (21). Team captain Ben Walker also gives Wake a steadying force in the middle, leading the team with 13 assists from his center position.

Yet the players were quick to note that there’s no “I” in hockey. Success in the sport requires everyone to be on the same page. Hockey, maybe more than any other sport, requires a team to play as one cohesive unit. So far, the Deacs are doing just that.

Players also agreed that playing hockey is about much more than just hockey. It’s about meeting people, building bonds, and supporting the community.

The team—with help from the Triad Hockey Alliance, Elon University, and the annex—held a game called “Hockey for Hope” on Nov. 4 to benefit Baptist Children’s Homes of N.C. and collect items for the flood relief efforts in North Carolina. They also participated in Wake’s annual D.E.S.K. service project, designing and building a desk for a local underprivileged child.

Walker, a senior from Milwaukee, says that playing hockey at the club level is “surprisingly competitive” and “a lot of fun.” He builds his schedule around study, hockey, and being the president of Wake’s Pi Kappa Alpha fraternity.

“Hockey gives us a new group of friends from diverse backgrounds,” he says. “It’s a great way to meet people when you’re freshmen. There are a lot of hockey players who are not cut out for the NHL, but they can’t give up the dream of playing.” And they work hard at it.

“I really have a lot respect for the guys,” Coach Pasquale says. “They play for the love of the game. There are no scholarships or fancy hotels. They work really hard. We have a good group of guys on and off the ice.”

Who can play? And what’s the cost? Any full-time Wake Forest student is eligible to try out. Tryouts are held the first week of fall classes each year. Team members are charged around $500 in dues, which covers ice time, equipment, travel, and more.

How long is the season? The season is around 20 games, with about half of those at home. The games run from September through February. Practices are held twice a week through February, lasting around an hour.

Where are games held? And when is the next one? Games are held at the W-S Fairgrounds Annex, which can seat around 3,500 fans. Wake has four home games this month including matchups against High Point (1/13) UNCC (1/21), a rematch with High Point (1/28), and N.C. State (1/28). Admission is $7 for adults and free for kids under 16. All games are set for 4 p.m. and feature live announcements, music, and concession sales.

For more info on the team, attending a game, or donating to the program, go to wakeforesthockey.com.

Members of Wake Forest's club hockey team line up before a game against Elon University at the Fairgrounds Annex. 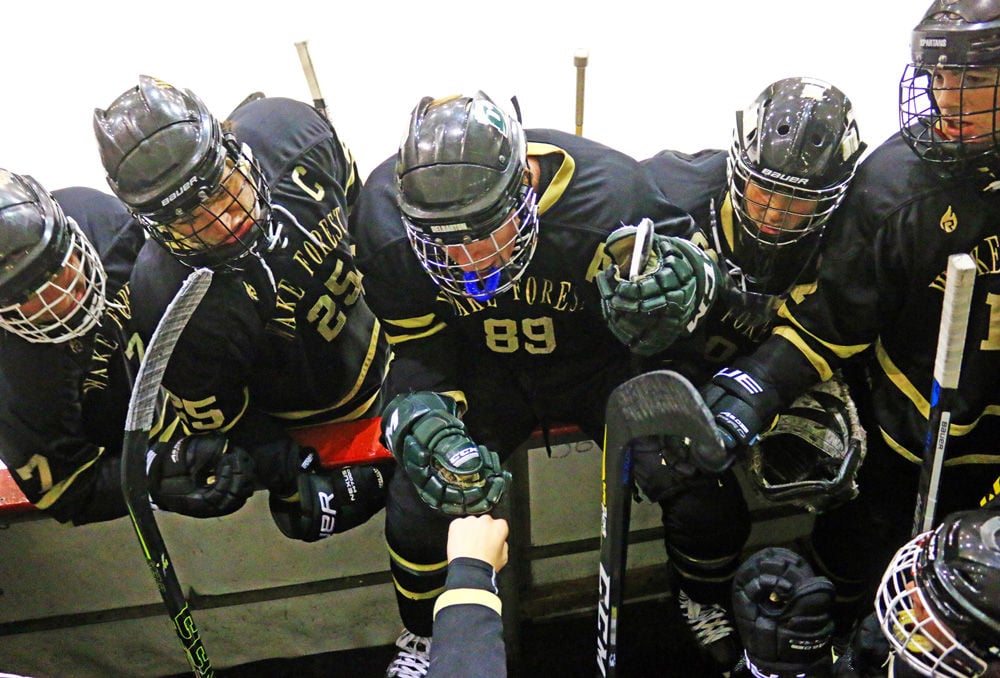