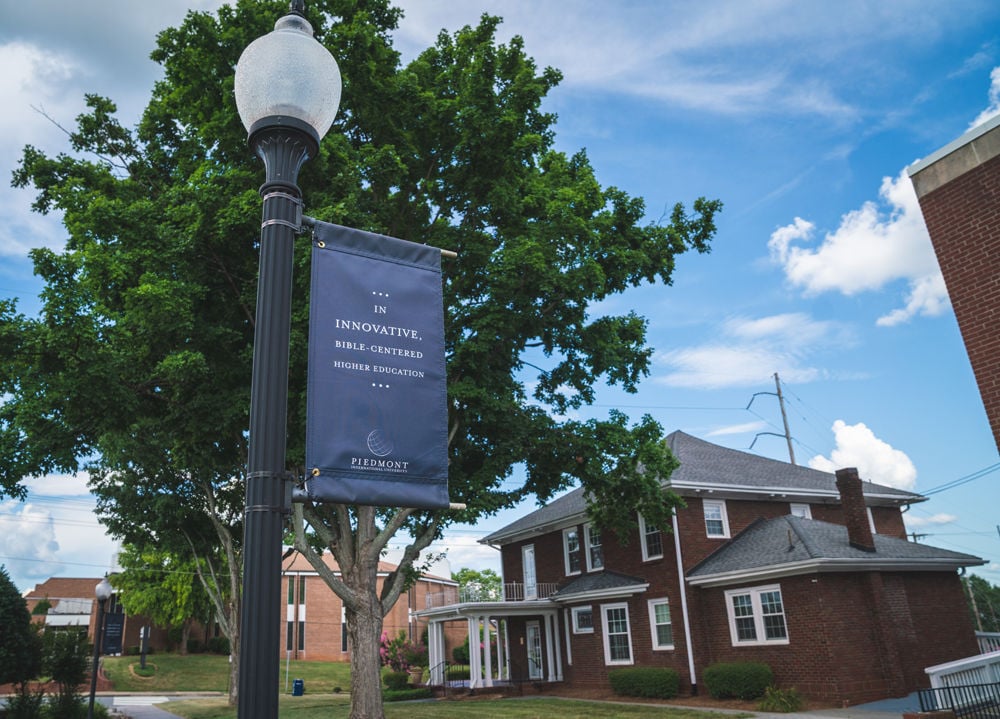 A number of informative and motivational banners hang along Piedmont's 10 acre campus. The signs were added as part of a recent logo/branding change at the school. 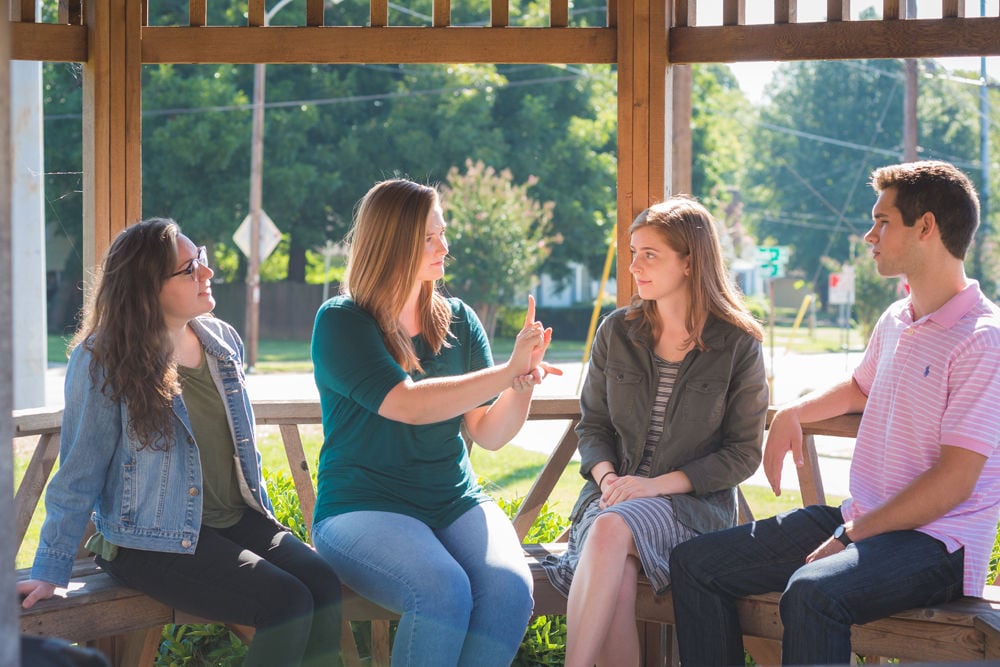 Sign Language Interpreting is offered as a major at Piedmont, one of the schools 50+ areas of study. 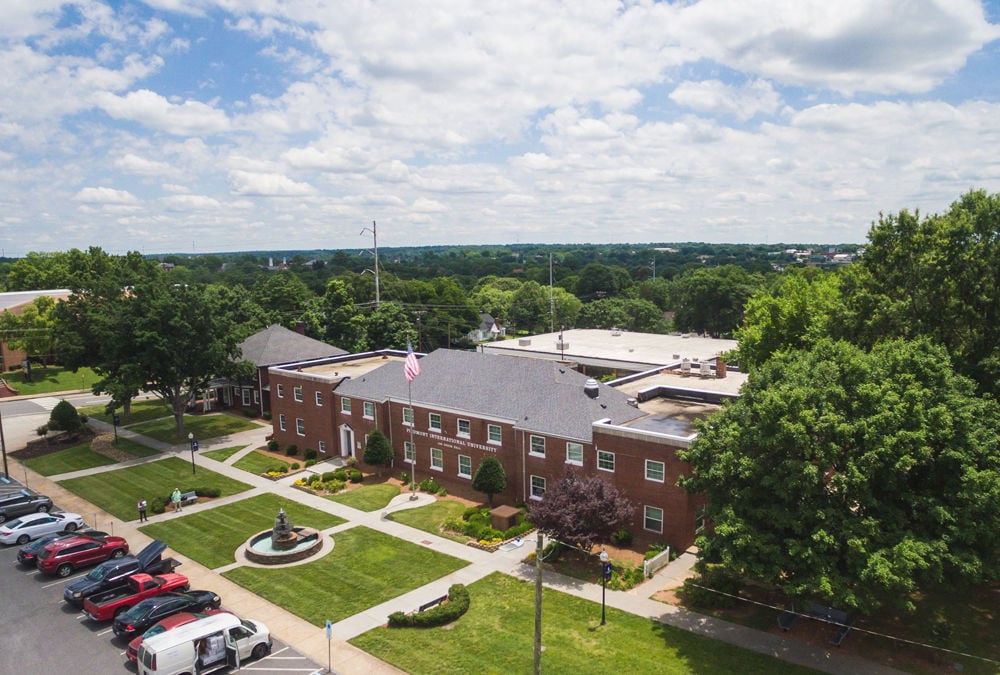 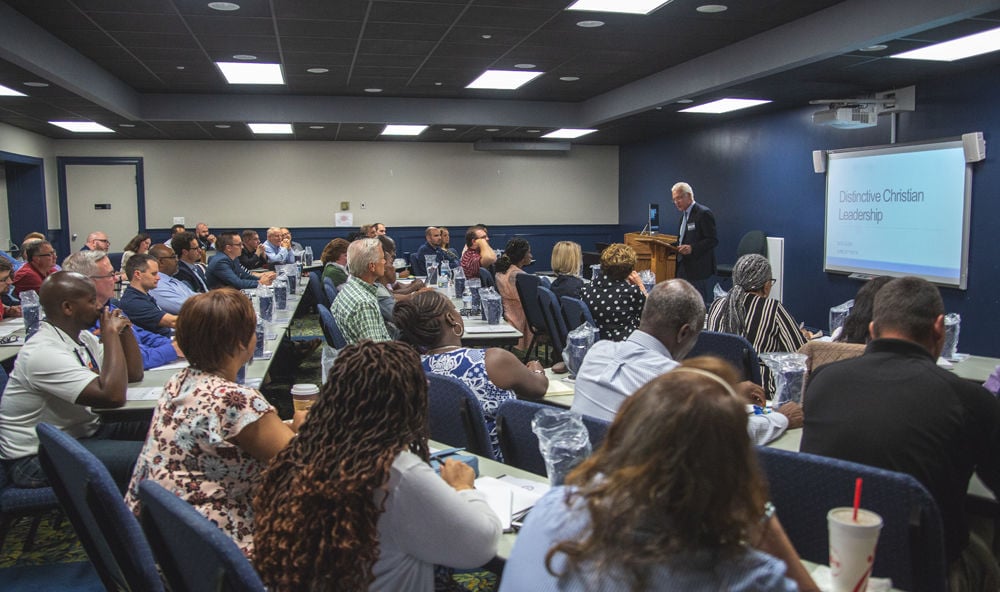 Piedmont's enrollment has grown tremendously in recent years, up to nearly 1,000 students. 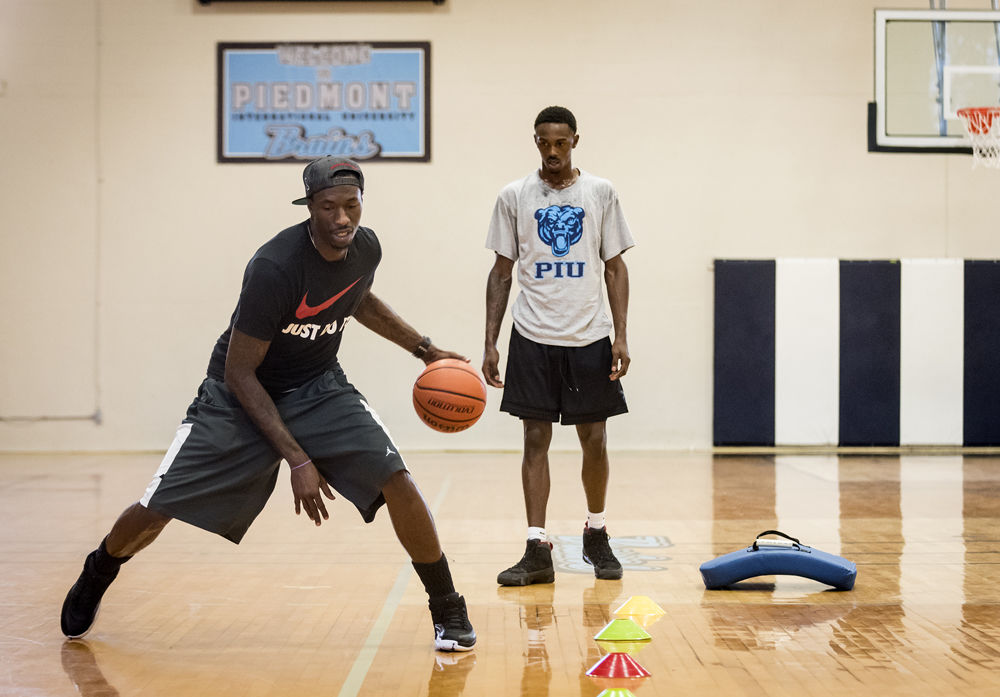 Former Wake Forest great and NBA All Star Josh Howard (left) was hired as PIU’s head coach in 2016. He’s since led the team to the Div. I playoffs while bringing in a number of high-level recruits.

Not long ago, Dr. Charles Petitt looked out his office window at Grace Hall and saw half-empty and repurposed residence halls on the Piedmont International University campus. In that moment, he seriously considered transitioning Piedmont online and making it the University of Phoenix of bible colleges.

“In 1975, Piedmont reached its highest enrollment, 488 students, then went on a slide for three decades,” he recalls. “The main campus was just static.”

The neighborhood wasn’t great back then, either. Petitt remembers having to boost security because crime was all around. He looked at other property to see if any good relocation options were out there.

Motto: Colossians 1:18 “...that in everything He might have the pre-eminence.”

Now, he’s glad he didn’t do what he often does—take action. Those dormant dormitories are full again, and the repurposed student-living space is back to housing who it was designed for.

“Every single room on campus that can be used for a dormitory is being used this fall,” says Petitt. “It’s really been fun for me to see a bit of synergy happen. We should hit 1,000 students this year, and for us that’s a big milestone.”

Petitt (seen right) had spent his whole life in ministry when he was chosen to become president of what was then known as Piedmont Baptist College in 2002. Its name changed to Piedmont International University in 2012.

“Twice I’ve felt like I had God’s guidance in my life, and this was one of those two times,” he says. “I had traveled here a lot to visit. I’d spoken here and talked in some of the classes. I’d just fallen in love with the school, but I had no idea they’d take a look at me [for the job].”

Petitt has since helped dramatically accelerate the university’s growth and made it a global draw in Winston-Salem. PIU is now fully embracing the future while standing by its core mission: to be a worldwide leader in Bible-centered education.

Piedmont International opened its doors in 1945 as Piedmont Bible Institute, the brainchild of Dr. Charles H. Stevens, pastor of Salem Baptist Church. It added a college component in 1948 and changed its name to Piedmont Bible College. For a long time it served as a regional school that trained pastors, church workers, musicians, and missionaries. Most students lived within four hours of town.

Few people at the school have a better perspective on how the university evolved than Dr. Beth Ashburn, current provost at Piedmont. She attended the school in the 1970s and taught English courses there in the ’80s. Her father, Dr. Donald K. Drake, also became Piedmont’s second president in 1970.

“Even back then, the school was very much international in its scope,” says Ashburn of her undergraduate days on campus. “We had a lot of students whose parents were missionaries and had lived in other countries all their lives. There was always this flavor of the whole world on campus.”

She remembers a lot of hustle and bustle on the campus and is heartened to see that feeling has returned as the university has expanded its enrollment.

“Students are excited to be here,” she says. “They love the faculty and the faculty loves them. It’s a really become a joyful community, a lot like it was when I was a student here.”

Piedmont’s growth derives mostly from the mergers or acquisitions of seven other schools since Petitt arrived. The 2004 merger with Florida’s Spurgeon Baptist Bible College, for instance, led to the creation of the Spurgeon School of Online Education. In 2008, Piedmont merged with Atlantic Baptist Bible College in Virginia, which created Piedmont’s Atlantic Scholarship for Ministry Training.

In 2015, Piedmont merged with Tennessee Temple University, bringing the School of Leadership and its flagship program, a doctorate in leadership. Petitt says application numbers for the leadership program are soaring, and he anticipates it doubling within the next couple of years. Dr. Brent Powell, dean of the school, came to Piedmont with the program and says he’s been treated by his new employer like he treats his own students.

“If you came into the leadership program as a student, you’d have my phone number and could call me anytime,” he says. “It’s like this very large extended family. You just become part of the family.”

Another relatively new and prized program derived from a recent merger with John Wesley College in High Point, which took effect in June. John Wesley’s popular business program is born out of efforts to get help from the University of Pennsylvania’s Wharton School of Business, which went all-in to help the program get up and running.

“John Wesley College basically set up a business degree program using the Wharton School of Business model, plus some bible ethics courses added in,” says Petitt. “With no money from marketing, that degree took off for them. Now it’s ours, and it might be our largest undergraduate degree program the first year we ever offer it.”

As a result of all the added curriculum, Piedmont’s enrollment is as large as it’s ever been, and it’s also more widespread. Online and on campus combined, the school now welcomes students from all 50 states.

“We’ve actually enrolled students from more than 100 countries,” says Petitt. “Jesus said in Matthew: 27, ‘Go teach all nations.’ We’ve decided to take that as a mandate. We’ll try to graduate someone from every country on the planet.”

He’s not kidding. Piedmont currently has someone overseeing the translation of an entire degree program into Portuguese in response to a growing demand Petitt sees in Brazil. About a year ago, Piedmont received the first half of a million-dollar grant to translate several of its degree programs into Chinese.

“We’re probably going to start with our counseling program, because of China’s skyrocketing divorce rate and strong desire to have marriage counselors trained,” says Petitt.

Meanwhile, on the main campus, the buzz is palpable. Piedmont even has a viable athletics department now, led by a basketball program coached by someone Wake Forest fans know well. About two years ago, Petitt hired former NBA All-Star and Wake Forest legend Josh Howard to take over just three weeks before the 2016-17 school year.

“I had met Josh about a year earlier and found out he started the Josh Howard Foundation in East Winston, trying to deal with mentoring kids in the very neighborhood he grew up in,” says Petitt, who ran into Howard again just a few days after the school’s previous basketball coach resigned. Petitt asked if he had any suggestions for who should replace the previous coach. A few hours later, Petitt got a call. It was Howard, who had a name—his own. Petitt hired him on the spot.

“We went up a division and are now a scholarship program,” Petitt says of the basketball program. “Last year we started four freshmen and were beaten in the playoffs by the team that won the national championship. [Howard] has got some talent coming in this year, and there’s a good chance we could win it all.”

The school’s growing success on the athletic field is yet another reason Petitt is excited about this school year. Now when he looks out his office window, he sees the hustle and bustle of a record number of students. One of them is the daughter of Harlie Miller, who serves as Dean of Piedmont’s Moore School of Education.

“I love the environment she’s in,” says Miller. “The engagement and experiences she’s receiving by [living on campus] is much more complete than it is for a commuter. She’s already made lifelong friends here. To me, that’s a valuable aspect as well.”

Students at Piedmont have a similar experience to students at secular universities. On-campus students live in one of three residence halls and eat meals in the school cafeteria. They can get help with basic study skills and can meet one-on-one with tutors through the school’s Student Success Center. They can participate in a variety of social activities on campus, ranging from movie nights to game nights, to karaoke contests to capture the flag.

Yet there are several things that set the student experience apart here. Perhaps most unique is that residential classes are only held four days a week (Tuesday to Friday), allowing an extra day for ministry, studies, or family time. Students also aren’t required to attend class in person if they aren’t feeling up to it; they can simply log in and join in on the class virtually, never missing a beat.

On the spiritual side, all classes begin with prayer, and courses are taught with the goal of helping students develop spiritually. Chapel services are also held daily at 10:45 a.m. (Tue–Fri), and students are expected to attend. Students who are single and under the age of 22 are required to live on campus unless they’re living with a parent, guardian, or spouse nearby. They also must abide by a nightly curfew—11 p.m. on weeknights, midnight on weekends. All of the offerings and regulations are aimed at creating an atmosphere that’s conducive to building a spiritual life.

Lately the atmosphere at Piedmont is looking a whole lot better, both on and around the campus.

Miller says students feel much safer now that the neighborhood surrounding the school, West Salem, has developed at a pace similar to the universities.

“When the baseball stadium came in and all the city renovations took place, and Fourth Street became a place to go in town, suddenly this area became the fun, awesome place to be. No one wants to relocate anywhere now.”

One of Petitt’s next moves is to add to the neighborhood’s current resurgence through aesthetic improvements on the PIU Campus. He wants to add porticos onto every building on the campus and a nice, spacious college green that will be punctuated by a large globe in the mold of New York City’s famous Unisphere.

Another key goal is to become regionally accredited, which brings added caché in some academic circles. Now, the university is nationally accredited. Perhaps most importantly, he wants to raise the bar when it comes to fundraising. To that end, he’s instituted the Vision 20/20 campaign with hopes of raising $10 million by the year 2020. The funds would cover a variety of initiatives at the school, ranging from technology upgrades to scholarship aid to athletic improvements and more.

Above all, the money would “help us train thousands of Christian leaders from every state and nation,” he says. “And that’s really been the goal at Piedmont all along.”

5 Things to Know About PIU

A number of informative and motivational banners hang along Piedmont's 10 acre campus. The signs were added as part of a recent logo/branding change at the school.

Sign Language Interpreting is offered as a major at Piedmont, one of the schools 50+ areas of study.

Piedmont's enrollment has grown tremendously in recent years, up to nearly 1,000 students.

Former Wake Forest great and NBA All Star Josh Howard (left) was hired as PIU’s head coach in 2016. He’s since led the team to the Div. I playoffs while bringing in a number of high-level recruits. 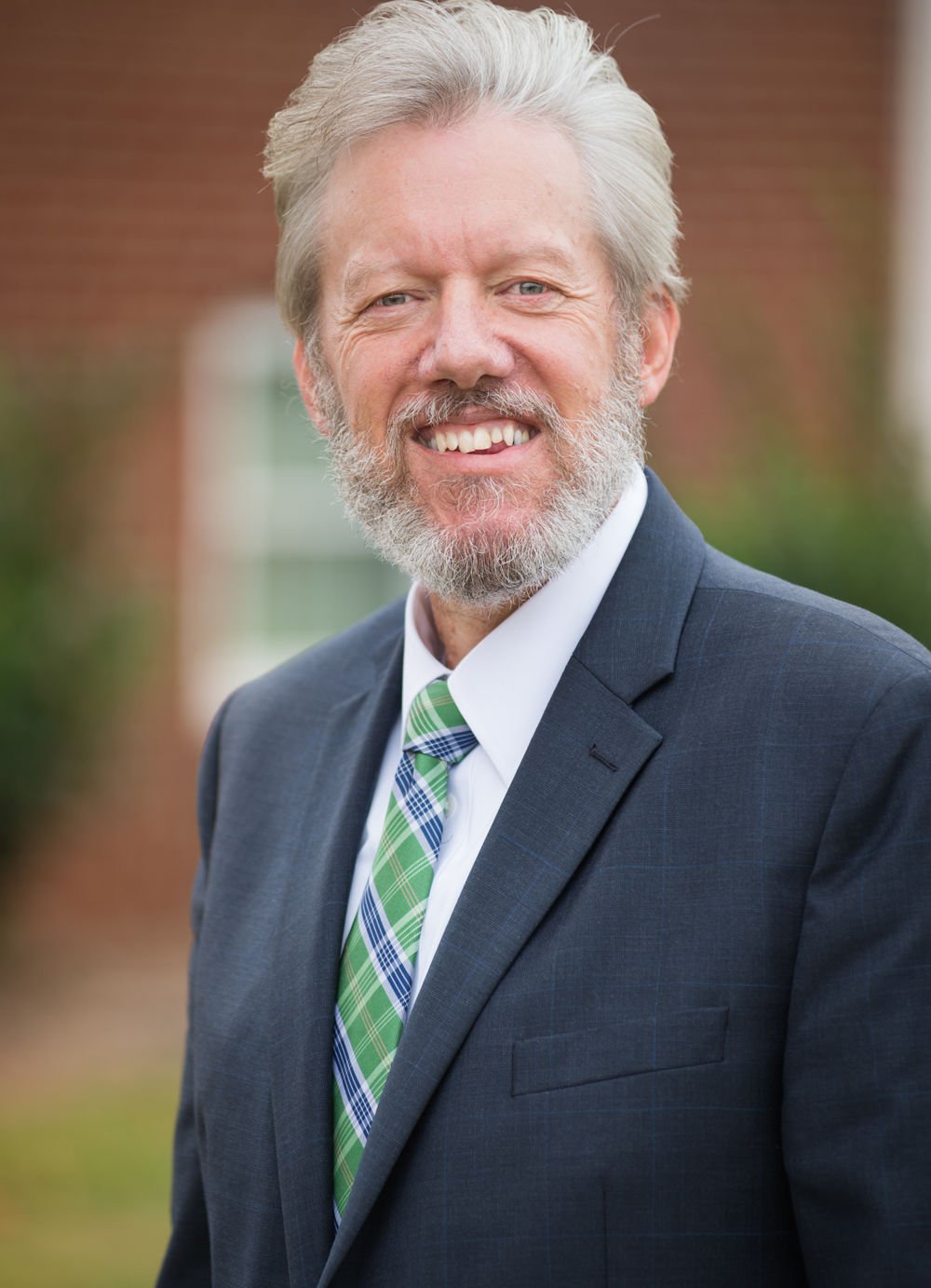 Dr. Charles Petit has been the president of Piedmont International University since 2002, when the school was known as Piedmont Baptist College.