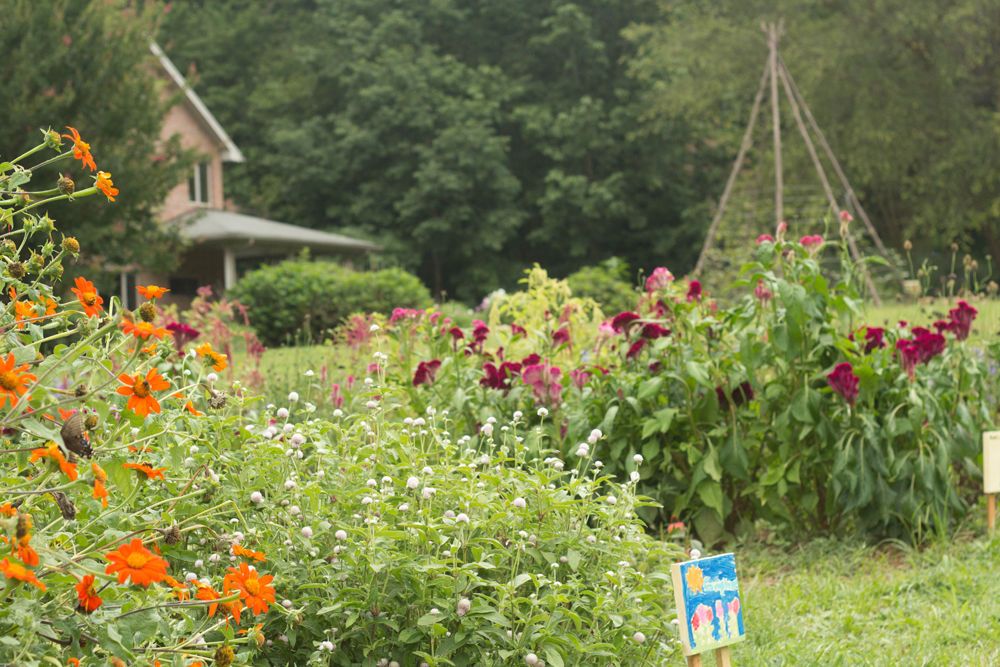 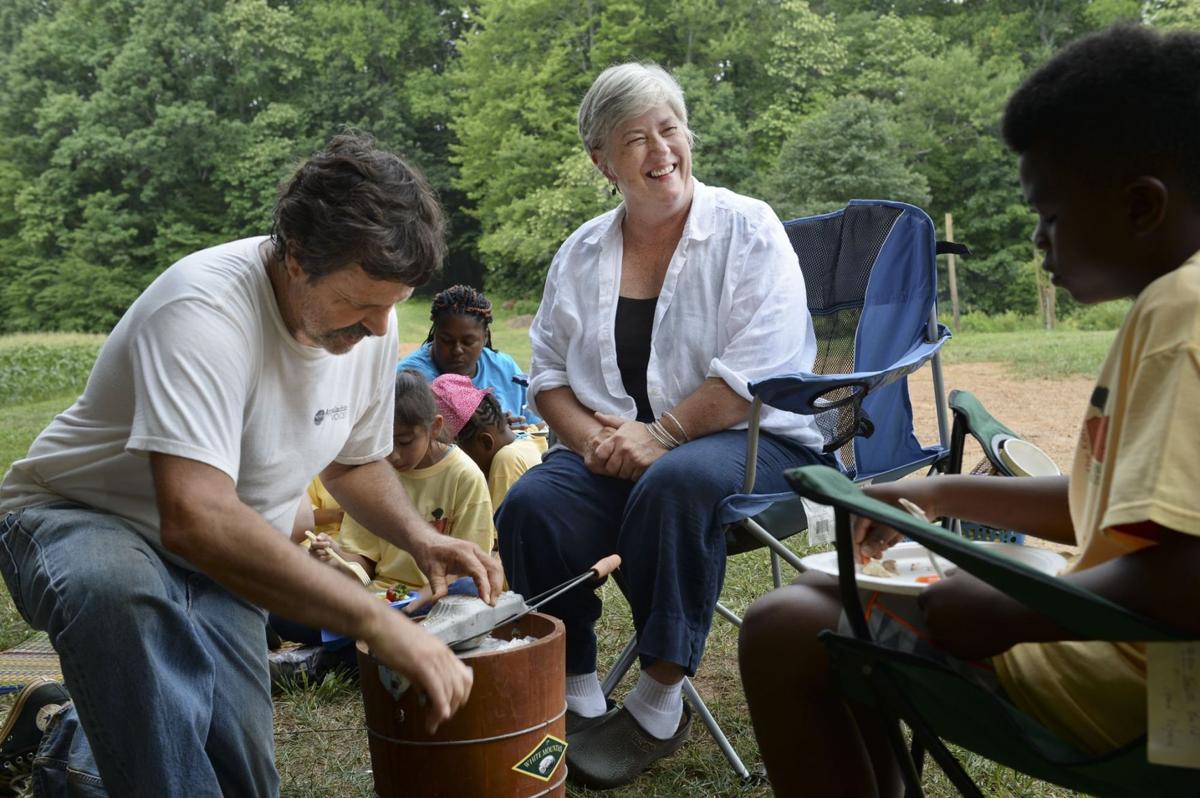 Bill and Margie Imus crank a batch of homemade ice cream for campers from the Boys and Girls Club visiting Minglewood Farm. 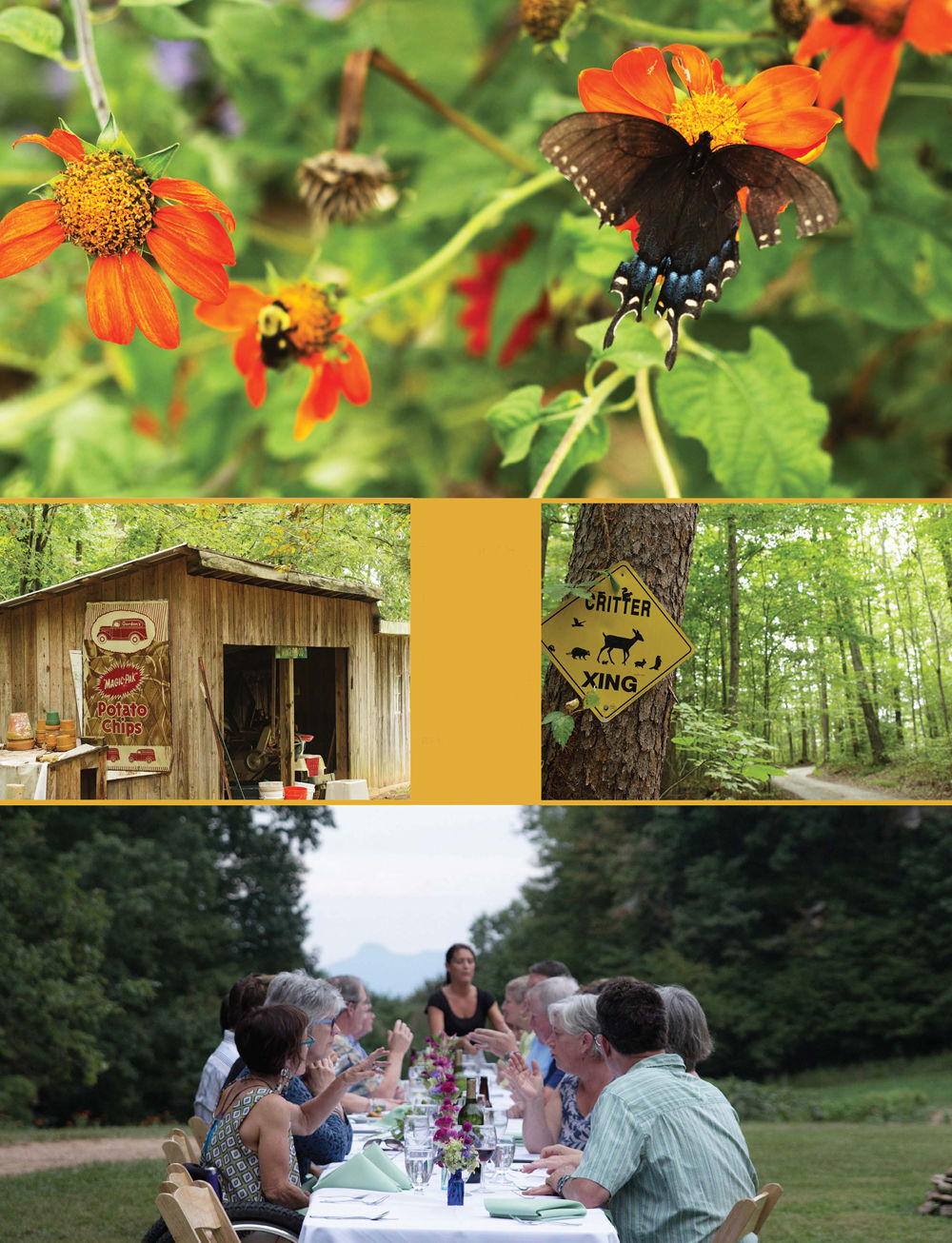 TOP: Various sights and scenes found at Minglewood Farm. BOTTOM: Guests at Minglewood’s Sunday Suppers are treated to a view of Pilot Mountain.

Last year Margie Imus closed the doors of her successful shop, Minglewood Flowers off Reynolda Road. After a decade in business, she felt it was time to grow a new type of operation—one that’s flourished into Minglewood Farm & Nature Preserve. Margie now runs the 65-acre outdoor learning center alongside her husband, Bill, helping foster a place where visitors can reconnect with the world around them.

With that, the couple is proving that it’s never too late to start again. But this wasn’t the first time they had followed their intuition to take a leap toward something new. In 1987, they launched a small eatery on the outskirts of downtown known as Cumberland Café. Though it’s long been closed, the restaurant is still highly revered by many in town.

Bill, a seasoned chef who got his start running corporate kitchens for Marriott, manned the back of house while Margie, then a working artist, worked out front serving and mingling with guests. “People love her personality,” Bill brags. Together, they focused on sourcing locally before it was en vogue because, as Bill says, “It was and still is about quality.”

During this time, Bill started growing his own produce in raised beds behind the restaurant. In doing so, he realized there was a strong demand in providing fresh, local organic produce to restaurants in the region. Eventually he felt called to step outside of the kitchen and focus on farming full time.

The couple purchased a 65-acre tract of farmland set among the rolling foothills of Stokes County. They admit that prior to purchasing the farm, they had very little experience even in gardening. It took time and a lot of patience to understand how to work their land. “We were like the characters in Green Acres moving here,” Bill laughs. “But I was willing to work hard and do whatever it took to make it work.” With his personal devotion—along with guidance from a seasoned farmer—Bill eventually learned how to work with the land instead of against it. And as a result, Minglewood prospered.

The Imuses would spend the next few decades growing food and flowers for local restaurants at the farm, which sits about 30 minutes north of Winston-Salem in the town of Westfield. Through the years, their farm became much more than a home and small business; it became their calling. They currently use about seven of their 65 acres to grow fruits, vegetables, and flowers, including two greenhouses where Bill starts all of his seeds. The majority of their property is hardwood forest, replete with nature trails, creeks, and native flora and fauna—resulting in an area that’s rich in biodiversity.

It was this wealth of biodiversity that inspired them to turn the farm into an outdoor learning center last year. While they still grow some flowers for wholesale, their intention has shifted toward building a legacy of preservation.

In 2015, the Imus’ working farm was reimagined as Minglewood Farm & Nature Preserve and designated as a 501(c)(3) nonprofit. Its current mission is to educate students and the surrounding community about sustainable food production and environmental stewardship. “You cannot expect kids to respect nature if they don’t have a direct relationship with it,” explains Bill.

The Imuses are currently working with local school districts to bring students out to the farm to see, touch, taste, smell, and experience nature’s gifts. They’re also attending N.C. Environmental Educator workshops with hopes of linking their tours with the state curriculum.

Ultimately, they hope the farm brings awareness to the state’s rapidly disappearing farmlands, forests, and native species. They also hope it inspires kids to find the joy in producing things with their own hands and establishes a sense of pride in what they produce. Margie says they love to see kids “come alive” and ask questions while at the farm.

In order to bring more kids to the farm, the Imuses are focused on securing funding to expand their reach within surrounding school systems. They’ll host a series of activities this summer to help raise additional funds, including Nature Day Camps for kids that integrate art, writing, and photography. There will also be a “Weekend Celebration of Art & Nature” featuring free events for families June 11-12, and a Northern Piedmont Farm Tour Day on June 26.

In addition, they’ve established a ticketed monthly event known as Sunday Suppers that features popular local chefs such as John Bobby of Rooster’s, Mark Grohman of Meridian, and Harrison Littell of Five Loaves Catering. Each month’s supper focuses on seasonal ingredients from Minglewood and surrounding farms, resulting in an authentic farm-to-table experience. The cost is $75 per person, which includes appetizers, a cocktail hour, and multiple courses. Proceeds directly fund Minglewood operations and children’s programming.

Above all, the couple hopes the preserve functions as a learning center for all ages, whether it’s a group of local school kids or a group of senior citizens. “We want folks to come visit, walk the fields and trails, and reconnect with the land,” Margie says. “There’s a lot nature can teach us.”

“You cannot expect kids to respect nature if they don’t have a direct relationship with it.”

Bill and Margie Imus crank a batch of homemade ice cream for campers from the Boys and Girls Club visiting Minglewood Farm.

TOP: Various sights and scenes found at Minglewood Farm. BOTTOM: Guests at Minglewood’s Sunday Suppers are treated to a view of Pilot Mountain.