The astrobotany program at WSSU has teamed up with NASA to study the effects of growing plants on lunar and Martian soil.
0 comments
Share this
1 of 3 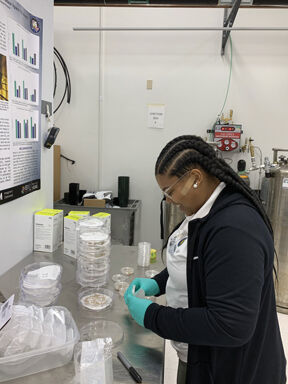 Lauryn Andrews gets some lab work done during their time in Florida earlier this year. 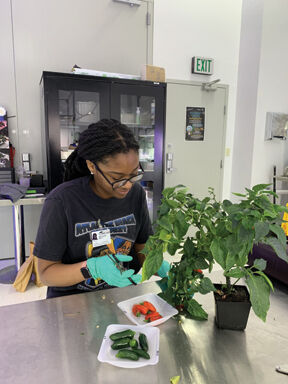 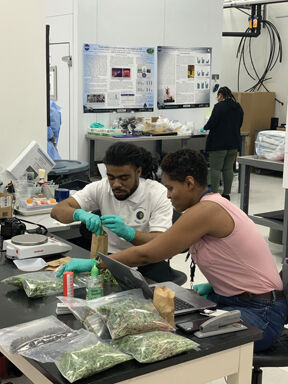 Research Assistant Brian Evans and NASA Scientist LaShelle Spencer examine specimens as part of a mentorship-partnership between WSSU and NASA.

Passion and persistence combined with doses of patience and faith paid off for Rafael Loureiro, especially as a Brazilian undergraduate student when a dream of a space-related career that didn’t seem possible.

“In my home country, I did not have a path to the career I wanted,” says Loureiro. “I was barely making a living as an adjunct professor and wanted to have the opportunity to make a difference in a field combining plants and science.”

Determined, he a took a bold step and contacted the pinnacle of U.S. space programs: NASA. Loureiro’s willingness to learn, and his enthusiasm, got the attention of Dr. Gioia Massa at the Kennedy Space Center.

Soon a mentorship-partnership took shape. The specialty of astrobotany emerged, combining two of his interests of space and plants. Next up was finding a university to continue the studies. Loureiro had ammunition this time to

go after his dreams. He approached several schools and got offers in return, but Winston-Salem State University (WSSU) won out.

“Astrobotany was so new that it grabbed their attention,” Loureiro says. “And, I had the backing of NASA and could get grants to support the research, so they were ready to listen.”

After years of struggle, Loureiro stepped into his dream job in 2018. He was officially an assistant professor in the Department of Biological Sciences. And, he had grants in hand to fund his research. Equally exciting was the ability to offer this field of work to minorities, which weighed heavily into his decision to choose WSSU, since minorities are often left out in STEM (science, technology, engineering, and math) careers.

Loureiro defines astrobotany as the combination of knowledge from botanists to introduce how plants and crops grow in low gravity landscapes and then the study of the response of plants in stressful off-planet conditions.

“We want to know what are the effects of plants that do not have enough nutrients; in this case, the effects of growing plants on lunar and Martian soil (known as regolith),” Loureiro says.

The NASA grants got the ball rolling, and labs were built. The small team of undergrads (five students in all) work closely together in the lab each week where they learn with Loureiro about the effects of light, temperature, lower nutrient content soil, and other variables on tomatoes, peppers, wheat, and other foods.

“We have been working on this research for two years, and are seeing good results with limitations,” Loureiro says.

Unlike many students who kickback over spring break, Loureiro’s dedicated students made the trip to Washington in March to talk to lawmakers about the importance of their work made possible largely by NASA and the North Carolina Space Grant Consortium, as well as traveling to NASA’s Kennedy Space Center’s Food Production Lab to meet the NASA scientists they would be working with.

Grant funding has continued from NASA and the North Carolina Space Grant Consortium since Loureiro’s arrival to WSSU. It’s made more remarkable for being the first NASA astrobotany Space Act Agreement focused on food production to a historically black college or university. And, students benefit from these grants by getting paid for their research but also by directly networking with the decision-makers in the field.

“Science is a tool,” Loureiro says. “A tool that humankind has, not only to understand the mysteries of the unknown; to satisfy the innate curiosity that we all have, the curiosity that makes us human, but it is one of the most powerful tools that we have in our hands that helps us to serve one another. If I can use my science to help others, be it by its results, allowing a more just distribution of food security worldwide, a safe establishment of space colonists in our solar system and beyond, or by simply offering a journey of discovery and wonder to my students, I know that I have achieved what I have always dreamed of doing — to have the ability to change lives.”

Lauryn Andrews gets some lab work done during their time in Florida earlier this year.

Research Assistant Brian Evans and NASA Scientist LaShelle Spencer examine specimens as part of a mentorship-partnership between WSSU and NASA.