How Winston-Salem’s art house cinema has used virtual screenings to bring movies to the masses.
0 comments
Share this
1 of 2 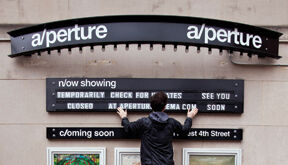 Aperture cinema employees change the marquee to announce the theater has temprarily closed because of the coronavirus. (Walt Unks/Winston-Salem Journal) 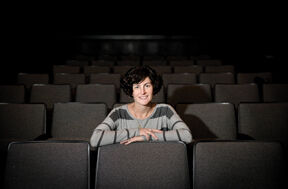 On March 13, Lawren Desai and the staff at a/perture cinema in downtown Winston-Salem were trying to figure out if they could space people apart in their screening rooms.

But with the country locking down due to COVID-19, and health officials urging people to avoid large groups, Desai, the theater’s executive director, quickly figured that reducing capacity would not only be difficult, but probably wouldn’t be all that safe anyway.

Posters for “Never Rarely Sometimes Always,” a teen pregnancy drama slated to open that weekend, still hang in the atrium outside a/perture. Bottles of hand sanitizer occupy the concession stand, works by local artists hang in the windows, and screening rooms remain empty.

By order of the governor, indoor theaters in North Carolina remain closed for now, but a/perture has continued to engage with the community. Desai has been curating virtual screenings. The website offers advice and resources to create a “Film Camp @ Home” for kids to learn about the art of moviemaking. And over the summer, the theater hosted a drive-in screening of “Back to the Future.”

“We’re hoping to do more outdoor events in the fall, and we’re going to continue to release films in the Virtual Cinema,” Desai says. “But it’s really hard to plan when you don’t know what the next phase will entail. As far as being open here, it’s too early to say [when that might happen].”

The art house cinema opened in 2010 as a two-screen theater, with another two screens added in 2013. It has served as a venue for the RiverRun International Film Festival, and regularly screens foreign films, documentaries, and independent movies of the sort that don’t get much play at big multiplexes.

On a/perture’s Virtual Cinema, accessible through the theater’s website, about two dozen films are available for streaming. “Tickets” for the movies cost $12 (about half of which goes to a/perture), and generally makes them viewable for 72 hours. The theater also offers suggestions on its website for pairings of movies and food from local restaurants (one suggestion: Takeout from The Quiet Pint with the 1952 John Wayne flick “The Quiet Man,”)along with beer-movie pairings.

The Virtual Cinema, though, has not brought in nearly as much money as what the big screen showings once did.

“You have one person in the household buying the ticket, but they’ll have two or three people over to watch the film,” Desai says. “And they’re not buying concessions, either.”

The theater does retain its fervent fans, though.

Chad Harris, an instructor in UNC-Greensboro’s School of Education, says before the pandemic, he typically went to a/perture about twice a week, and that one of the main reasons he moved downtown was so he could be close to the theater.

“I can walk down there in less than three minutes,” he says. “The last movie I saw there was ‘Ordinary Love’ starring Liam Neeson and Lesley Manville. That was the beginning of March. I loved the intimacy of the theater. I love the employees there. I love that students from School of the Arts do artistic work there, like the little films that tell you where the exits are. And with the Virtual Cinema, they’ve been very clear about how to access everything and have been able to respond to social issues.”

Desai has also been using the theater’s windows and poster frames to display local art and public service announcements. One poster for the upcoming James Bond flick, “No Time to Die,” featured actor Daniel Craig wearing a mask. Other works urged people to vote or thanked essential workers.

“The arts are an escape, they’re a celebration, and people are really missing that,” Desai says. “A return to pre-COVID days still feels far away. But the arts can really help people, and we want to do what we can. And eventually we’ll be open again.”

a/perture’s Virtual Cinema, which features first-run movies and curated film series, can be accessed at aperturecinema.com. Most of the films cost about $12 a piece to stream. Those paying for a film on the Virtual Cinema will typically have access to that movie for 72 hours. The theater, which operates as a nonprofit organization, also accepts donations through its website.

James Allbritton: Creating connections through the power of music.

The power of art and music (specifically) captured James Allbritten’s heart and mind when he was a high school student, and he has spent most …

Aperture cinema employees change the marquee to announce the theater has temprarily closed because of the coronavirus. (Walt Unks/Winston-Salem Journal)