It is early morning in West Salem when the sun kisses the Forward Fuchsia painted front door of Melissa Vickers’ modest midcentury cottage. The Beatles’ “Here Comes the Sun” plays in my mind as a flower-filled front yard bursts to life with yellow dotted daisies, roses, purples and hot pinks.

Melissa Vickers purchased this precious little jewel box of a home — tucked away on a quiet dead-end street — in 2006, when she was working as an interior designer for Callaway, Johnson, Moore & West Architecture.

She met her husband Brandon not long after and welcomed their first child - Stella (now 11) - into a world of living color a la mom.

When Vickers became pregnant again with her second daughter Cora (now 9), their 850 square foot “tiny house” seemed inadequate for a growing family. So they packed up and moved around the corner to a spacious historic farmhouse and began what Vickers calls “a complete renovation.”

Four years later, missing their old street and old house, the Vickers got back to where they once belonged.

“People thought we were insane,” says Vickers, who with her husband was determined to return to a simpler “less-is-more” lifestyle that many consider the first step toward rational living.

I first met Vickers not far from her home, introduced by a mutual friend at Goat Feathers – West Salem’s neighborhood nexus of vintage “finds,” curated chotskies and new-to-the-market knick-knacks - a favorite stop to shop of Vickers.

Within minutes of being properly introduced — I notice the designer’s colorful Kate Spade Keds — we are scouring our phones in an attempt to share photos of objects we love.

“Look what I found earlier this morning at Lost in Time (Antique Mall),” she says showing me a bright canary yellow, midcentury lamp. My eyes widen.

“We’re not going to fight over this, are we?” she says pulling her phone away with a smile.

“No.” I laugh and ask if she has photos of her home.

“I’m no Joanna Gaines,” she confesses as she scrolls. No ‘farmhouse gray’ from her she adds, as she touches a photo. “As you can see, I like color.”

Vickers tells me her first trip to London opened her eyes to the fun you could have with color.

“I noticed how the British used all kinds of fun colors on their front doors,” she says, “and I instantly fell in love.”

Inspired and back home again, Vickers put her new found passion to work and painted her front door the fabulous and unforgettable Forward Fuchsia.

“I want people to drive up to my house and instantly know it’s mine,” she says.

Step inside and close the door, and the mood changes with Vigorous Violet. This split-personality approach to each exterior door sets the tone for statements just as bold with colors like Silken Peacock, Needlepoint Navy, Relentless Olive and Primavera; in the kitchen of course.

Addressing their home’s modest footprint, the Vickerses waterproofed the basement and turned it into a playroom for the girls with an area set aside for Vickers sewing projects (last year she made the most of that modest space as one of the three founding members of Project Mask Winston-Salem).

On the main level, the Vickers added a master suite to the back of the house which they finished in February 2020 —“just in the nick of time for the pandemic,” she says.

Back in Goat Feathers, Vickers shows me another object of her desire — a porcelain bowl decorated with the art of psychedelic pop artist Peter Max whose art inspired the animation of the Beatles’ “Yellow Submarine” movie — no doubt the genesis for this article’s imaginary soundtrack.

“I love color,” Vickers says, “and being surrounded by bright and deep colors brings me and my family joy.”

I guess when it comes to color, all you need is love.

Having recently helped a Buena Vista couple transform their basement into an adorable Air BNB and bringing her equally passionate eco-friendly design approach to a local exec’s home, Vickers is currently tricking out her family’s new weekend getaway of a “cabin” in Boone.

Vickers says she is coining the term “Scandilachian” design for the mountain space.

“If the last year has taught me anything,” Vickers says, “it’s that life is short.”

“Design doesn’t have to be permanent, a house changes just as life changes, so have fun and be willing to take chances. You might just be surprised.”

If your name is Candy Guy, your holiday tradition better be a sweet one. 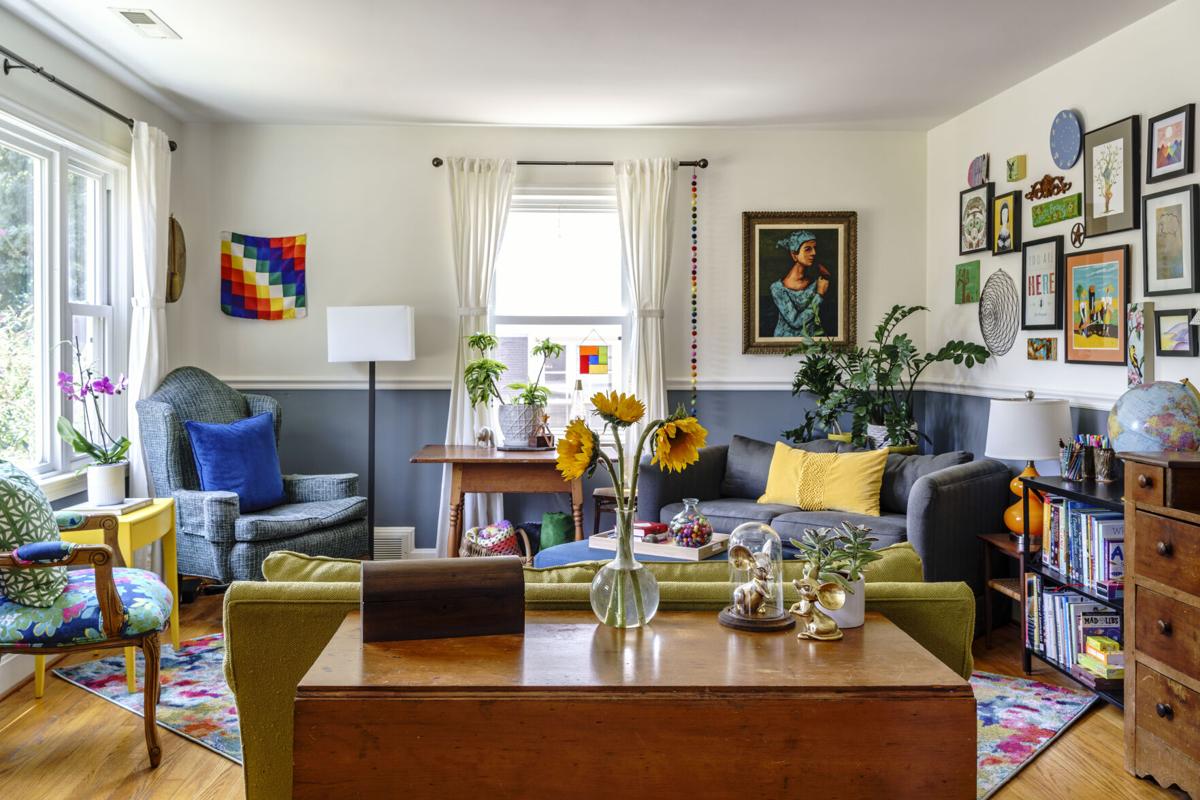 The living room receives sunlight all day long, which accentuates the bright and bold colors throughout the space. 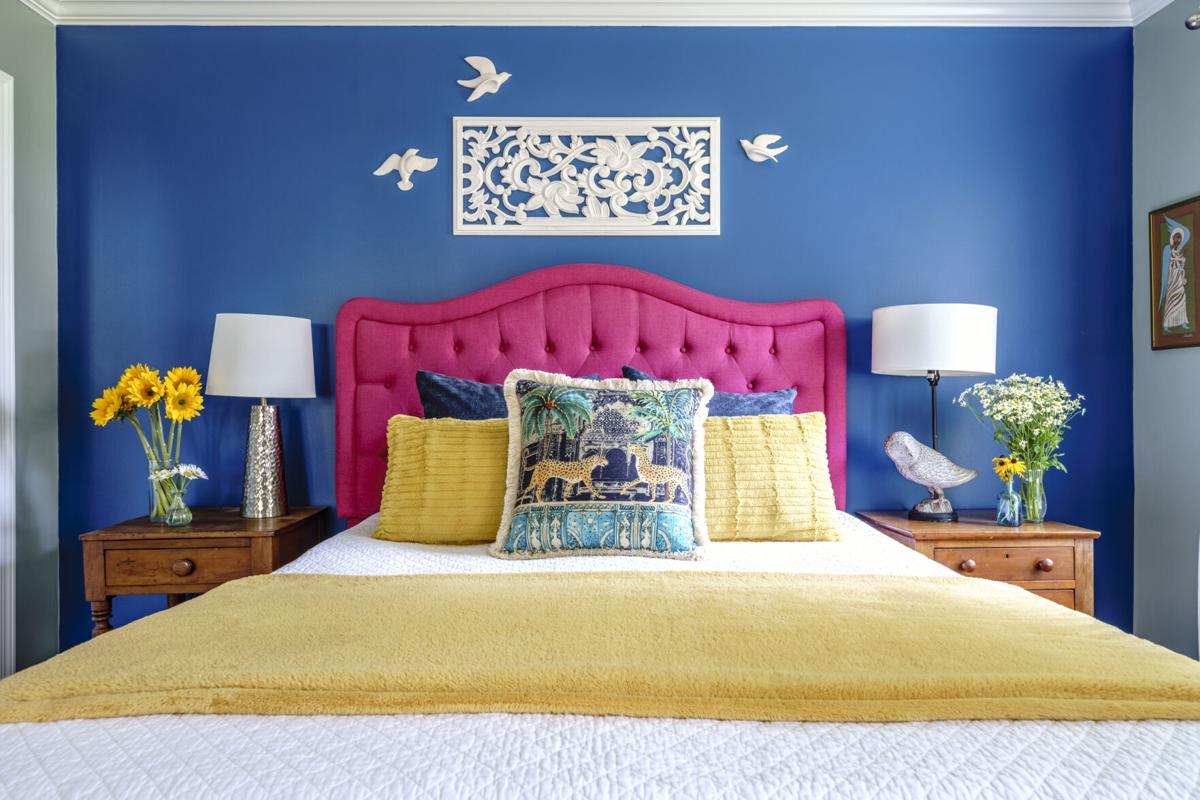 The primary bedroom is designed using bold colors creating a vivid and inviting space. The owl lamp was purchased at LoLo and is the focal point of the nightstand.