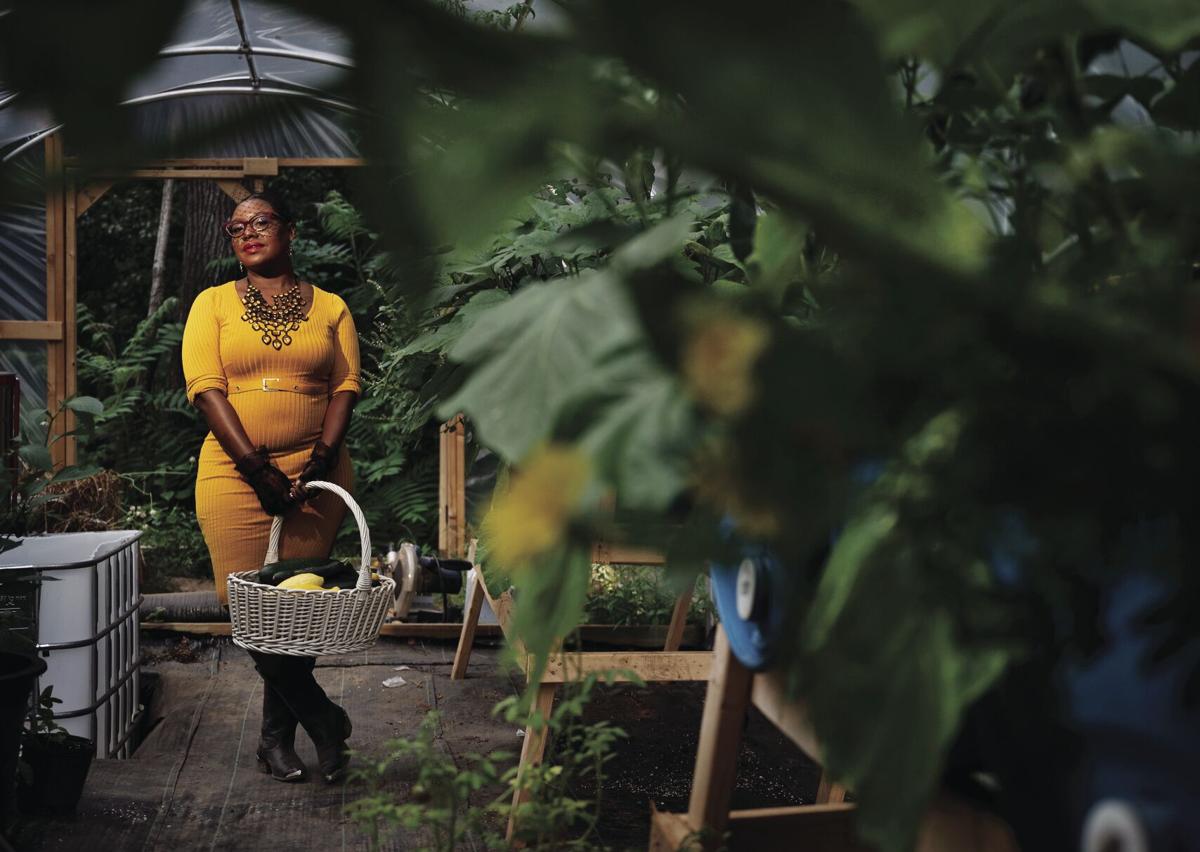 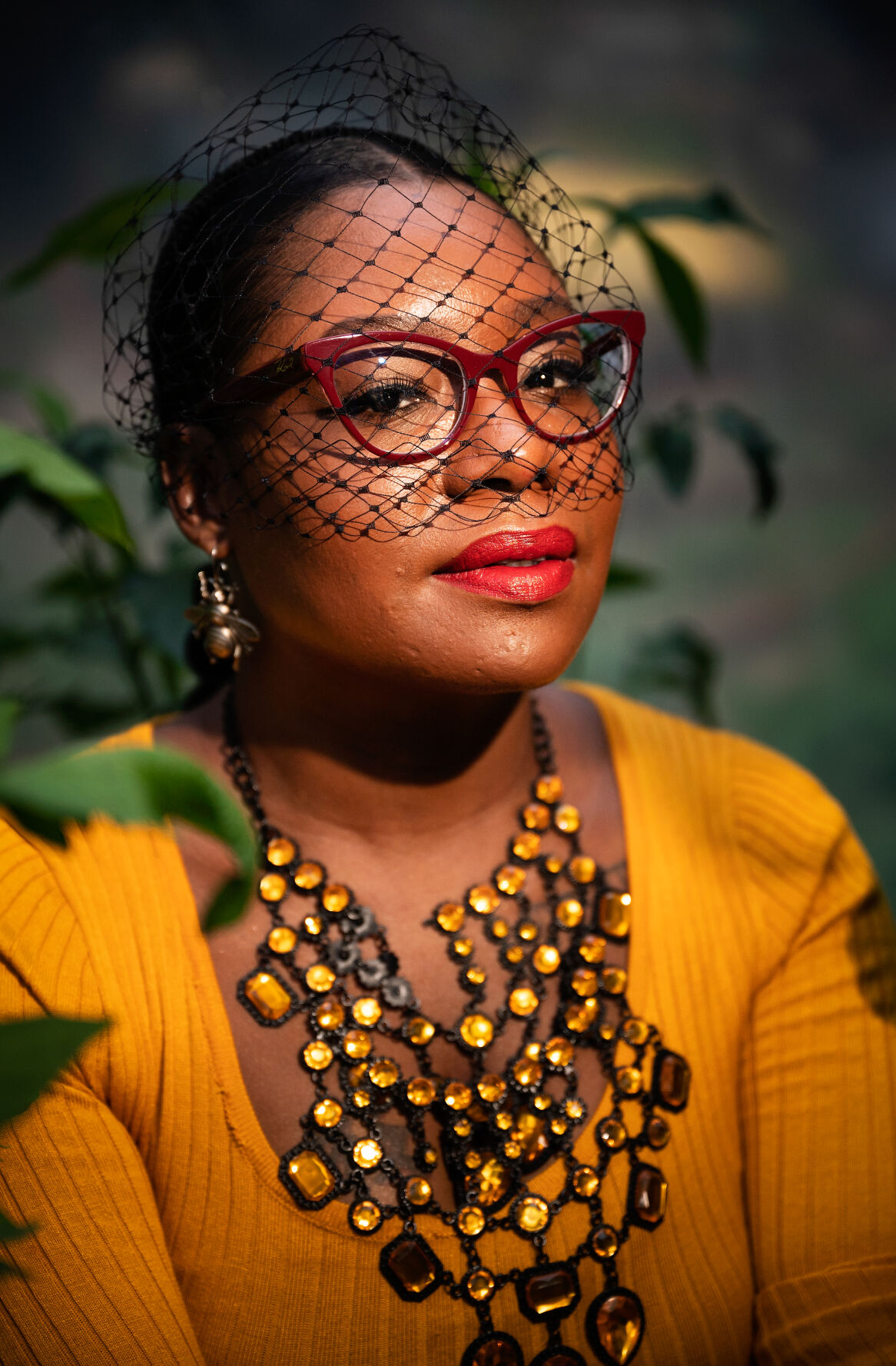 Samantha Foxx Winship, owner of Mother’s Finest Urban Farm, sits for a portrait in her greenhouse on Wednesday, July 7, 2021, in Winston-Salem, N.C. 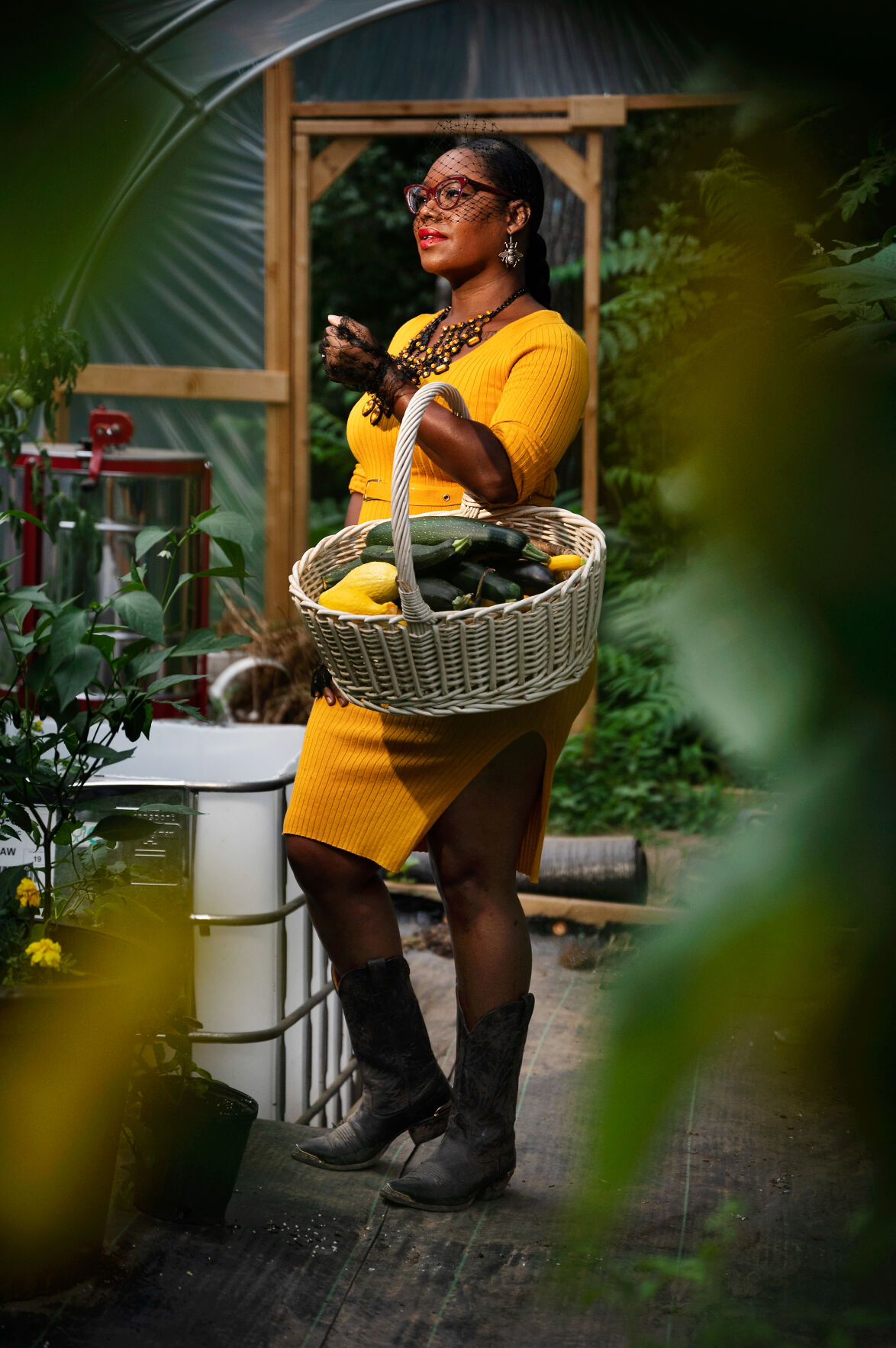 Samantha Foxx Winship, owner of Mother’s Finest Urban Farm, holds a basket of freshly picked zucchini and squash as she stands for a portrait in her greenhouse on Wednesday, July 7, 2021, in Winston-Salem, N.C. 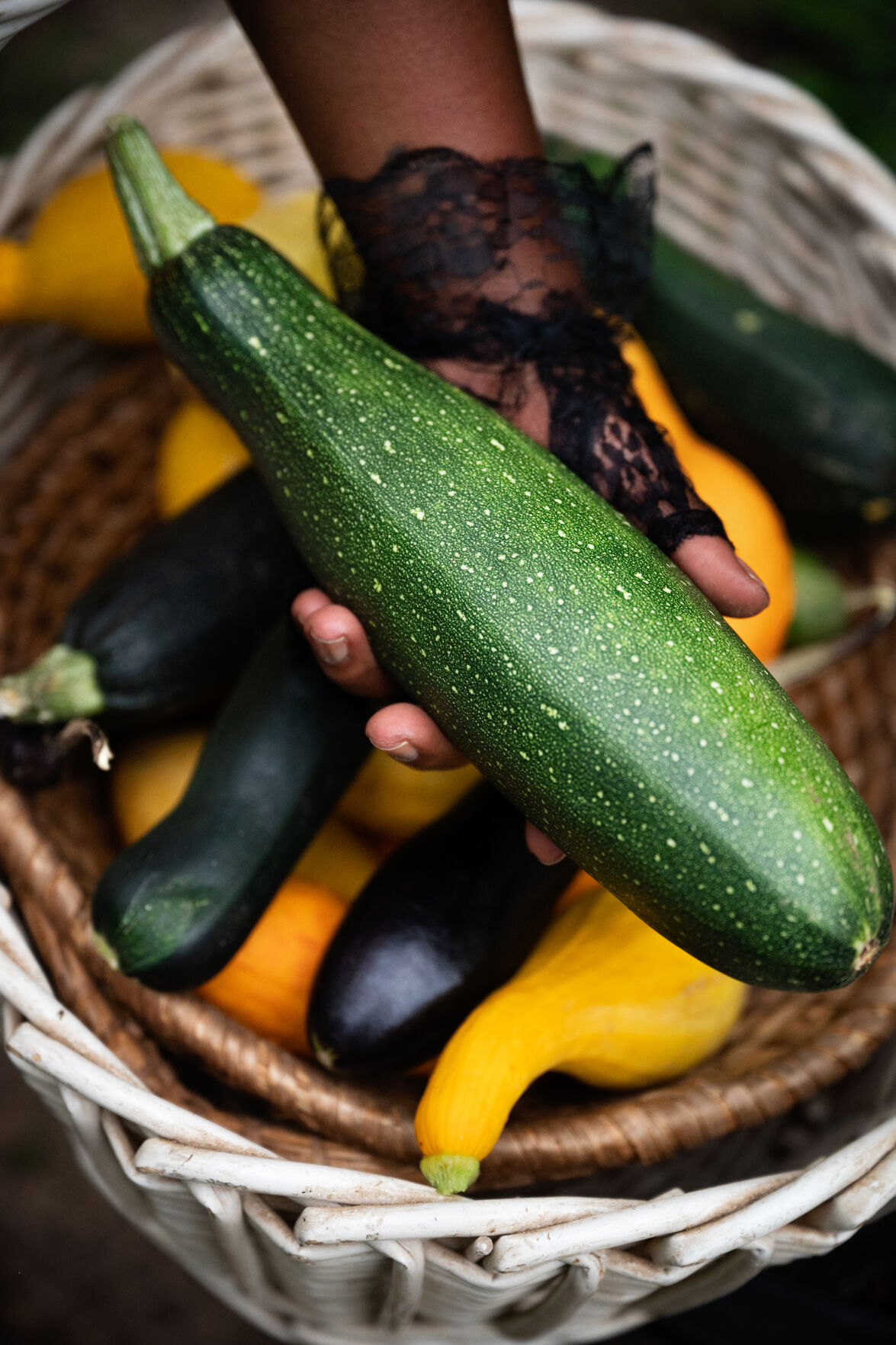 Samantha Foxx Winship, owner of Mother’s Finest Urban Farm, holds a basket of zucchini and squash from her garden on Wednesday, July 7, 2021, in Winston-Salem, N.C. 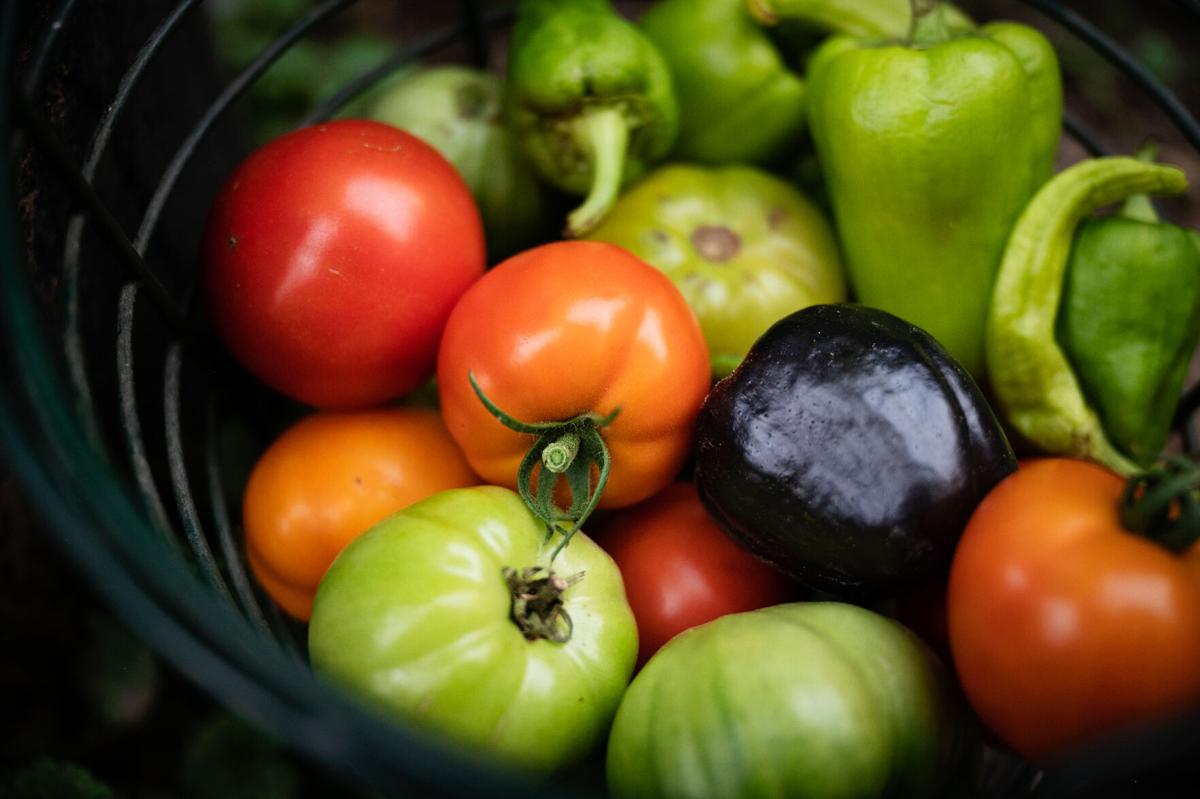 A basket of tomatoes and peppers from Samantha Foxx Winship’s, owner of Mother’s Finest Urban Farm, garden on Wednesday, July 7, 2021, in Winston-Salem, N.C. 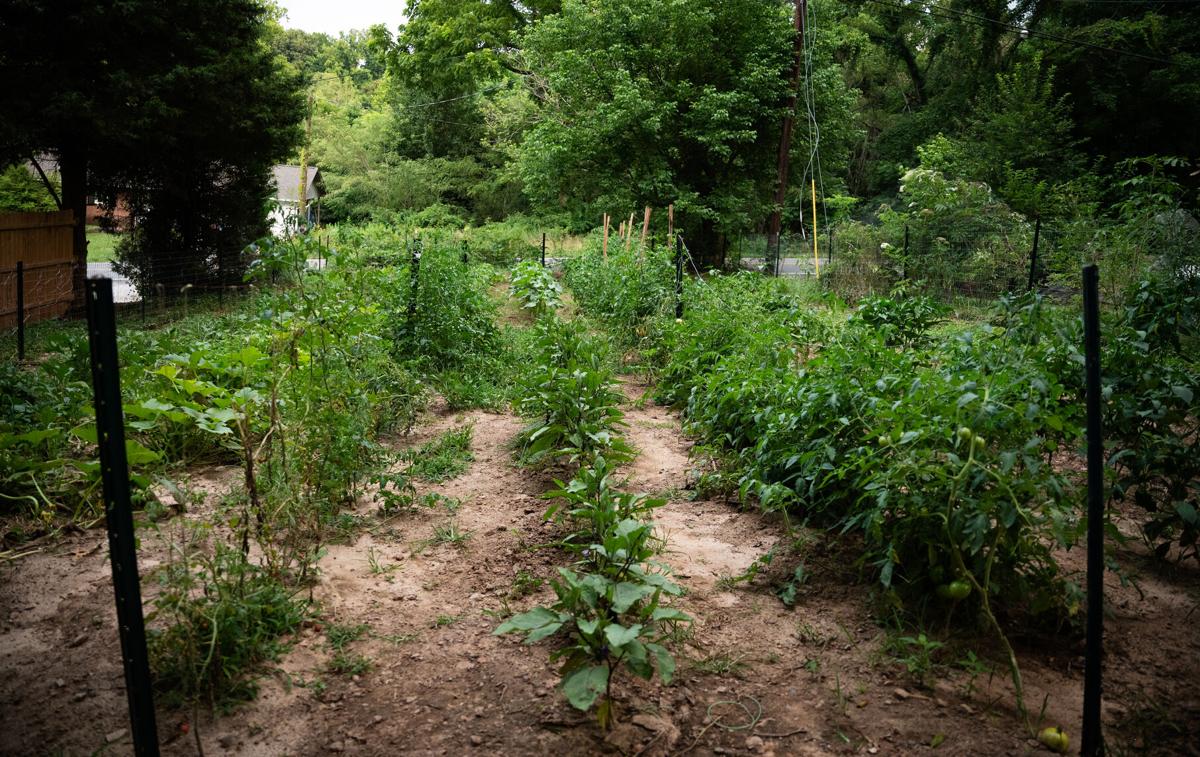 Samantha Foxx Winship is seeking not just to grow kale, okra, and garlic on her 2½-acre farm near Walkertown.

She sees what she’s doing as an educational endeavor and wants to teach people where their food comes from, to teach others about food preservation, to teach up-and-coming Black farmers how to generate bountiful harvests.

“If you can feed yourself and your family, that goes a long way,” she says. “And I feel no traditional classroom can teach you that type of thing, even though it’s one of the most important life skills. Farming provides a lot of character-building skills, not just how to feed yourself, but also how to run a business. And everyone should have access to quality food. It’s not a social status thing or a color thing. Having the ability to grow your food, that’s a powerful thing.”

Winship, aka the Lipstick Queen of Farming, is founder of Mother’s Finest Family Urban Farms. Alongside her husband and kids, she raises a variety of crops on a plot of land populated also by chickens, goats, ducks and bees.

Under the Mother’s Finest label, she makes a line of products that include Scotch Bonnet honey, whipped shea honey butter, elderberry syrup and honey soap. And she is organizing the Aug. 14 Bee Younited Festival, which will feature live music, food trucks and “Goatpolooza” games.

Mother’s Finest got its start about four years ago, but Winship says farming has always been in her blood.

Born in North Carolina, she spent her teenage years in Chicago, but would visit in the summers with her grandmother in Goldsboro.

“Her brother was actually a farmer,” she says. “So during the summertime, we would help out on his farm. I was a little bit younger, so I wouldn’t get as intense of a load as some of the older ones. But I saw what it was like day to day to operate a farm. One of her friends had a community garden, and I was exposed to that as well.”

she felt drawn back to the land, and several years ago decided to sign up for a class through the N.C. Cooperative Extension.

“It really helped me realize that I needed to be back in the world of agriculture,” she says. “It was like a wake-up call. And farming, I felt, allowed me to have some control over what I was eating. I also had a desire to educate others about where their food comes from. It was a personal journey.”

Winship’s website features photos of her in the field wearing stylish outfits. The name “Lipstick Queen of Farming” came from a profile about her that ran in digital publication The Bitter Southerner, and “people just really loved it.”

But the reality, she says, isn’t as glamorous as her nickname would suggest.

“This is one of those things that you really have to love,” she says. “It’s hard. No day is perfect. You have to have some good critical thinking skills. We don’t have days off. We work seven days a week. I was going to make a space into a small farm store, but when COVID hit, I ended up not doing it. I still have it, but I’m using it for storage right now. We’ve had to pivot a lot.”

Winship is a regular at the Cobblestone and Fairgrounds farmers markets in Winston-Salem and is working on setting up a mobile store from which to sell her produce. She also figured that if she’s growing food “you need bees,” so she set up some hives, which now make up a big part of her enterprise.

“I got my certification, got stung a bunch — some days they have a little attitude,” she says. “I had no idea what I was doing at first, but went to a class, and took it from there. And growing up, I didn’t really see Black beekeepers. My grandmother would say, ‘You’re the first beekeeper I’ve met.’ She was so proud of that. Representation is important, which is why I want to expose kids to this. I’ve had people reach out to me from Brazil, from the West Indies, reach out about beekeeping. And I would like to go to some of the places, teach women to beekeep. I have that on the table to give back.”

Winship says she would like to continue developing the Mother’s Finest brand, maybe producing a cookbook or a line of utensils at some point.

“And of course, I want to stay connected to the community,” she says. “I always want to be out at the farmers markets. That’s an important part of the whole business. And we try to show people how to fix the food. I do that type of thing on Tik Tok now. We want to give people a good foundation of resources.”

The Bee Younited Festival will take place from noon to 8 p.m. on Aug. 14 at the Winston-Salem Fairgrounds and Annex. Tickets are $15 each and can be purchased through Ticketmaster.

Mother’s Finest products are sold at the Cobblestone Farmers Market, 1001 S. Marshall St., from 9 a.m. to noon on Saturdays, and 4 to 6 p.m. on Wednesday; and at the Fairground Farmers Market, at the Winston-Salem Fairgrounds, from 6 a.m. to 1 p.m. Saturdays.

Samantha Foxx Winship, owner of Mother’s Finest Urban Farm, sits for a portrait in her greenhouse on Wednesday, July 7, 2021, in Winston-Salem, N.C.

Samantha Foxx Winship, owner of Mother’s Finest Urban Farm, holds a basket of freshly picked zucchini and squash as she stands for a portrait in her greenhouse on Wednesday, July 7, 2021, in Winston-Salem, N.C. 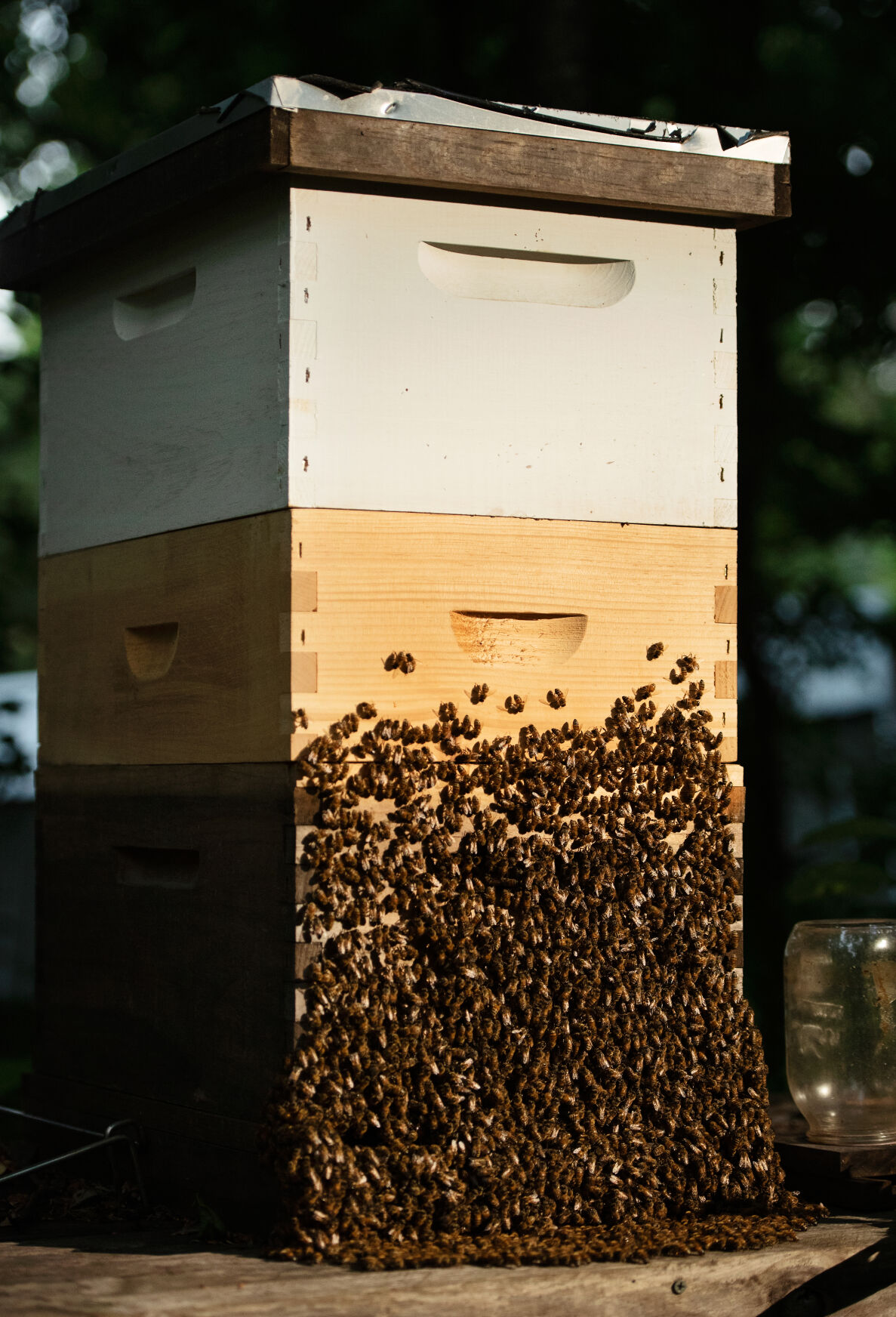 Samantha Foxx Winship, owner of Mother’s Finest Urban Farm, holds a basket of zucchini and squash from her garden on Wednesday, July 7, 2021, in Winston-Salem, N.C.

A basket of tomatoes and peppers from Samantha Foxx Winship’s, owner of Mother’s Finest Urban Farm, garden on Wednesday, July 7, 2021, in Winston-Salem, N.C.