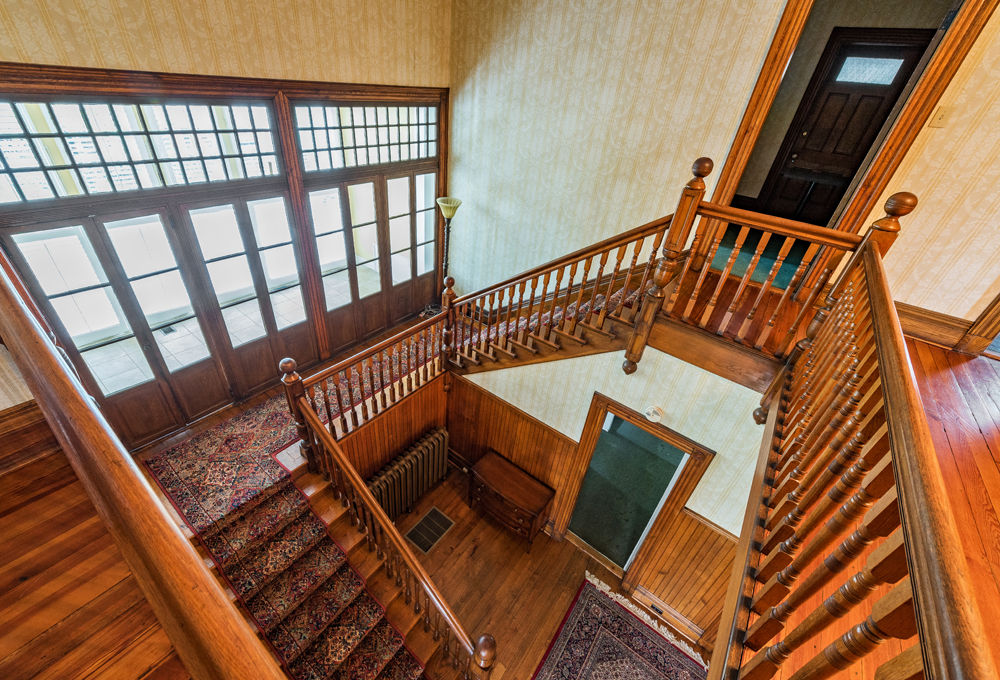 Replete with Queen Anne influences, the 3-story Hylehurst follows a free-flowing floor plan that centers around a large staircase 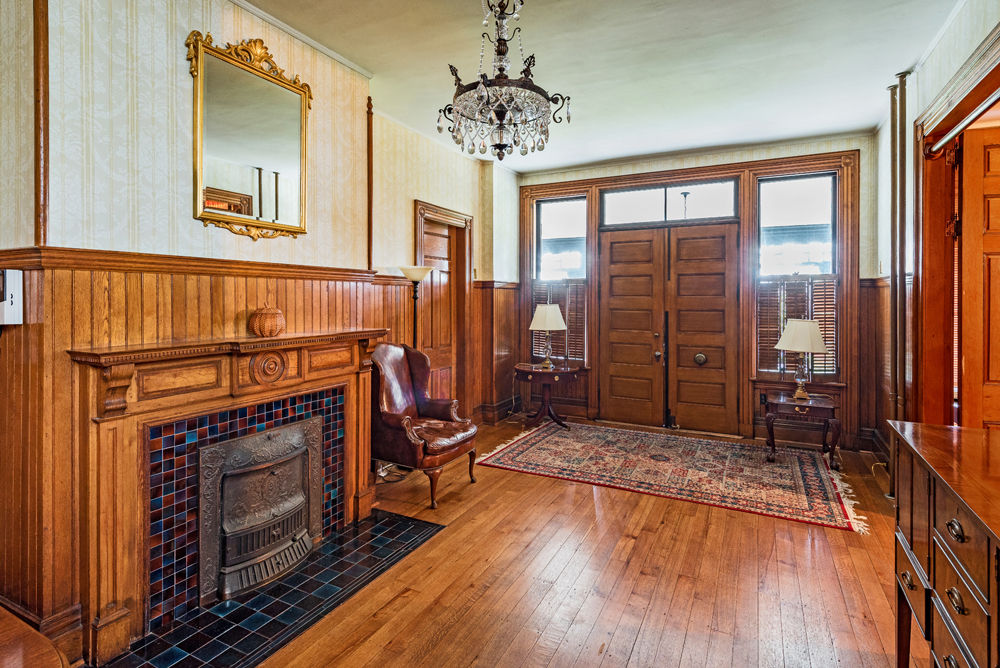 All of the rooms on the first floor of Hylehurst feature elaborate mantelpieces surrounding the fireplaces. Architect Henry Hudson Holly reasoned that “mantels of wood are, as a general thing, more artistic and attractive than those of marble.” 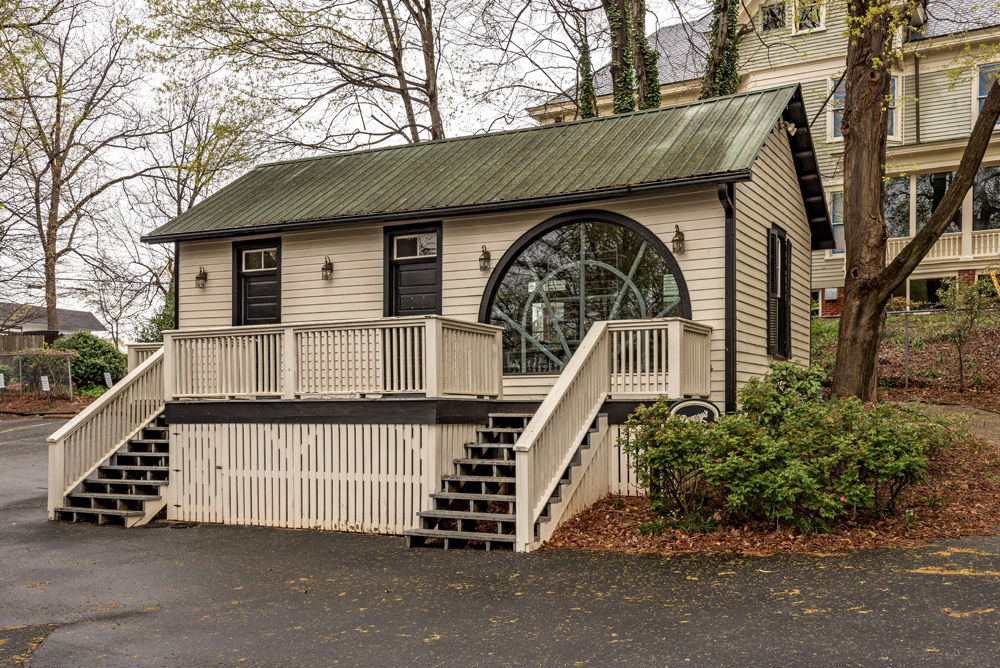 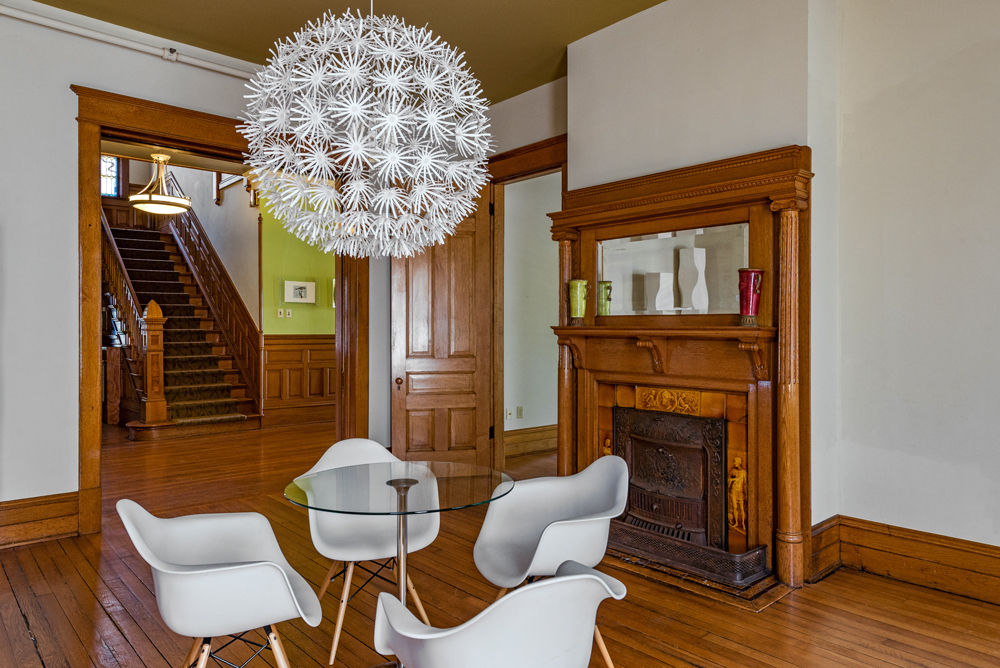 Modern Scandinavian chairs now fill the library in the 1901 Blair House. The room’s mantelpiece features a neo-classical design executed in oak with a mirrored over-mantel. 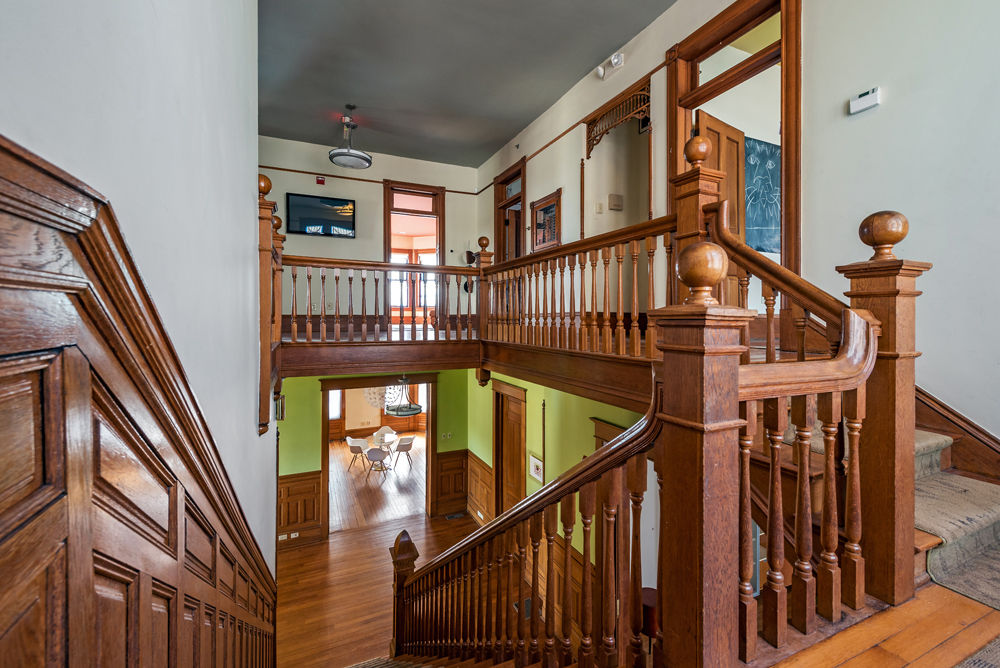 A view of the second floor landing inside The Blair House, looking downstairs into the library 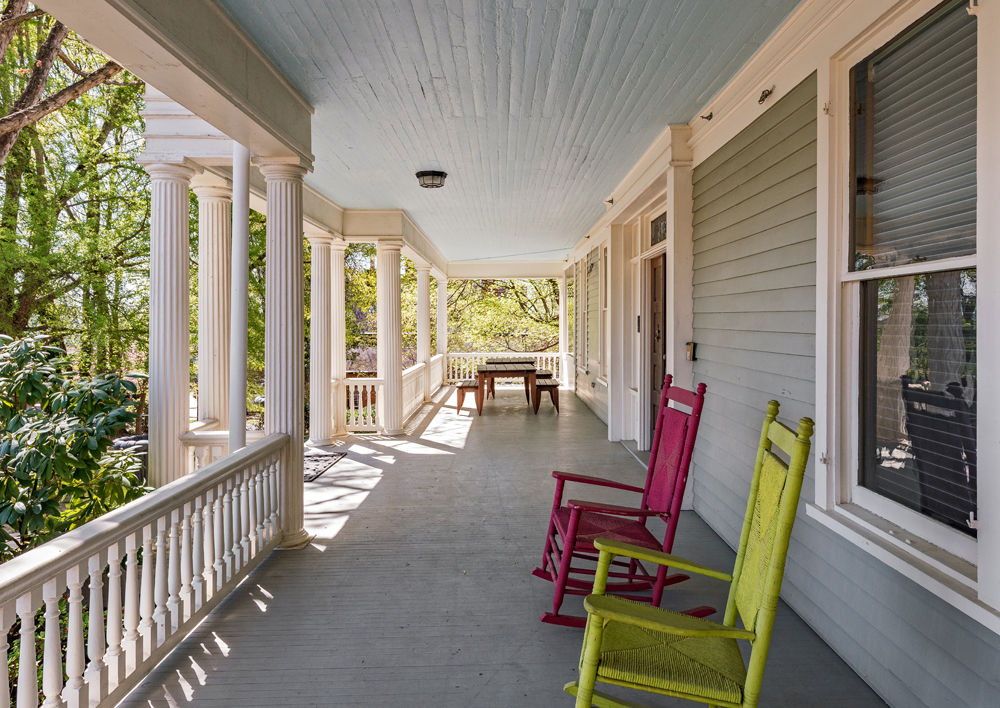 May serves as National Historic Preservation Month, a month dedicated to events promoting historic places, heritage tourism, and instilling a sense of national and community pride.

On May 1 from 4–6 p.m., the Forsyth County Historic Resources Commission kicks off a month of local events by inviting the public to an open house of two historic landmarks: John W. Fries’ 1884 Hylehurst and the 1901 Col. William Allen Blair House. Stationed side-by-side on S. Cherry Street, the properties are both listed on the National Park Service’s National Register of Historic Places—the official list of America’s historic places worthy of preservation. Both homes have been converted into office space in recent decades, and both are currently on the market.

Formerly the homes of prominent local residents who share family ties, Hylehurst and the Blair House represent two of the four surviving high-style, turn-of-the-20th-century residences along South Cherry Street, which was once the finest residential boulevard in all of Winston-Salem.

Constructed in the 1880s by Fogle Brothers Lumber Company for John W. Fries and his wife, Agnes Sophia de Schweinitz, Hylehurst is the manifestation of the businessman and community leader’s rise to prominence in the late 19th century.

Holly’s “eclectic design” for Hylehurst included the fancy architectural language of the day—faux half-timbered gables, bracketed posts spanned by a balustrade and lattice frieze, and scalloped second-story shingles above first-story weather boards—all of which was highlighted with a complimentary paint scheme of tan, green, and red.

Until they died in 1927 and 1915, respectively, John and Agnes Fries lived in the house with their eldest daughter, Adelaide Lisetta (1871–1949), a historian, professor, and archivist of the Moravian Church – Southern Province. Adelaide bequeathed the family residence to the heirs of her sister Mary Eleanor Fries Blair.

In 1997, Hylehurst was meticulously renovated into first-class office space. When Dewey’s Bakery purchased the home in 2007 to use as their corporate office, they utilized the old servant’s quarters/carriage house as a wedding boutique and bridal cake showroom. Dewey’s would vacate the property in 200?, as it needed more space for its growing corporate operations.

Now on the market for $995,000, Hylehurst continues to stand as a tangible reminder of the impact the Fries family had on Winston-Salem.

Stationed at the corner of Cherry and High streets, the Col. William Allen Blair House was built at the turn of the century for William Blair, another prominent local leader, who made significant contributions to the education, civic, legal, and banking communities of Winston. The abode was built on the site of what had been Hylehurst’s garden and tennis courts, and the Blairs, who had lived with the Frieses for five years after they married, emulated Hylehurst’s floor plan in their own home, which was also built by the Fogle Brothers.

The Blair House stands today as one of the finest two-story frame Colonial Revival-style residences in Winston-Salem. According to author Heather Fearnbach, the architecturally and historically significant home integrated characteristics of both the Queen Anne and Colonial Revival styles with features that included a “high hip roof … projecting central façade bay … tall corbelled chimney stacks … and a wraparound porch that terminates at a porte cochere.”

Blair received the honorary title of “Colonel” in 1905 from President Theodore Roosevelt after assisting him in his inaugural committee. He and his wife, Mary Blair, occupied this residence until their respective deaths in 1948 and 1966. Their son, John Fries Blair, founder of John F. Blair Publisher, would live in the home until 1983, when he moved into Hylehurst.

Derrick Davis would later buy the Blair House, and his son, Chad, made renovations to the home in 2002 in collaboration with Woodbine Agency, a local advertising firm. Maureen Hall, president of Woodbine, would then purchase the house in 2002 and lease it to Woodbine. “It was a fabulous place to have a business,” Hall says. Everyone loved working there.” Her company remained there until 2014 when it relocated to Greensboro following a merger with The Sales Factory.

The 7,713-square foot Blair House, which has been certified as Class-A office space, is currently on the market for $995,000. “The house is still in fabulous condition,” says Hall, who now runs Ginger Top Farm. “We cherished it for a long time; now it’s time for someone else to love her.”

Pearl Monroe Tucker, or Roe Roe as her family calls her, was 3 years old when she started feeling aches in her legs and her arms.

They played for dancers and skinny dippers. They backed Aretha Franklin’s sister. They tore down a KKK billboard. They almost made it onto a b…

She has a successful yoga studio, the Breathing Room in the West End Mill Works, but Suzy McCalley’s passion project is teaching social and em…

Marianna (Meg) Mengwei Brown and Joseph (Joe) Henry Nienstedt began their friendship at The Café on the UNC Greensboro campus. Little did they…

Independent cinema buffs will get a chance to see films at this year’s Sundance Film Festival without having to leave the Triad. A/perture Cin…

Replete with Queen Anne influences, the 3-story Hylehurst follows a free-flowing floor plan that centers around a large staircase

All of the rooms on the first floor of Hylehurst feature elaborate mantelpieces surrounding the fireplaces. Architect Henry Hudson Holly reasoned that “mantels of wood are, as a general thing, more artistic and attractive than those of marble.”

Modern Scandinavian chairs now fill the library in the 1901 Blair House. The room’s mantelpiece features a neo-classical design executed in oak with a mirrored over-mantel.

A view of the second floor landing inside The Blair House, looking downstairs into the library