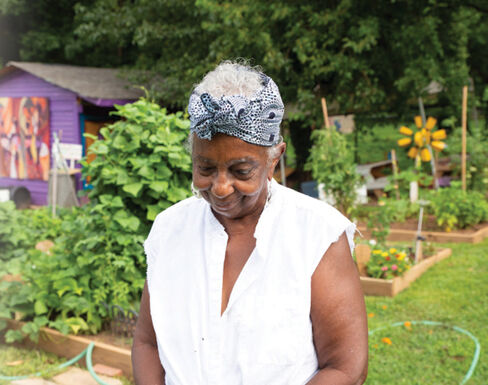 Rosa Johnson  in the community garden in the Boston-Thurmond neighborhood. 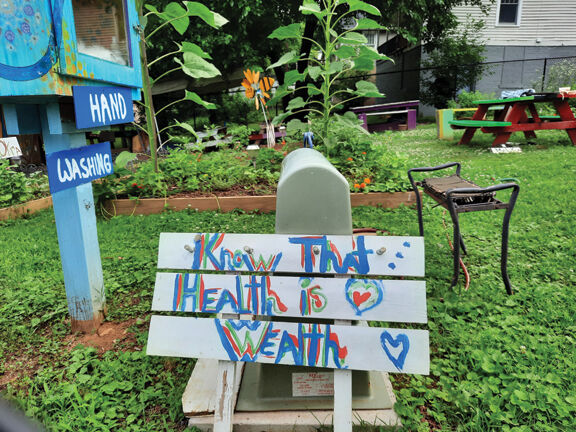 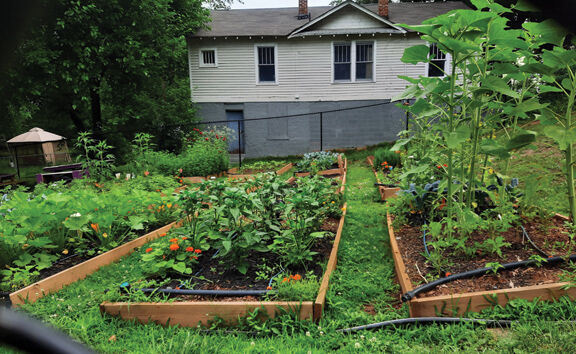 On most days, Rosa Johnson can be found in the community garden in the Boston-Thurmond neighborhood north of downtown Winston-Salem.

The garden is a resource for neighborhood residents to plant and harvest fresh vegetables. Johnson spends 20 to 40 hours a week planting, watering, weeding and turning compost. These days, she spreads a lot of mulch.

“Once I get the mulch down, it’ll keep the weeds down,” Johnson says.

Johnson’s leadership in the garden and fostering community-wide relationships through land and food, including working with students at nearby Kimberly Park Elementary School, garnered her the Forsyth County Governor’s Volunteer Service Award in the senior category for 2021. The award recognizes volunteerism in all 100 counties across the state. HandsOn Northwest North Carolina coordinates the award for Forsyth County.

“I want to be an inspiration to my community,” Johnson, 77, says.

Johnson moved from California to the Boston-Thurmond neighborhood three years ago. A vegan and Master Gardener, she took an immediate interest in the garden. Johnson says it was in a state of disarray.

“I decided to put some life back into it,” Johnson says.

With donated lumber, soil and volunteers from around the city,

Johnson partnered with the students of Kimberly Park Elementary. She was inspired to work with the school after some of the students visited the garden. Johnson recalls picking snow peas off the vine and popping them into her mouth. The children were aghast that she would eat something they considered to be dirty.

“That let me know that I had my work cut out for me because those children had no idea that food comes from the earth,” Johnson remembers.

She gave every classroom a grow tray. The students were eager to sprout seeds in the trays and nurture them until they could be transplanted to the garden, where they grew into green beans, cabbage, kale, bush beans and three kinds of watermelon.

This year, she is trying corn. Much of the produce ends up on the tables of the residents of Boston-Thurmond, a food-insecure neighborhood.

“One of my goals is to close that gap and provide nutritious vegetables for the residents and to encourage my neighbors to produce food and do something more positive,” Johnson says.

In addition to the students at Kimberly Park, residents from the neighborhood and across the city come to help – many from diverse ethnic backgrounds.

“I have an international cadre of volunteers,” Johnson says.

Johnson believes in the therapeutic power of gardening on physical and emotional levels. She says a woman, who was on medication for depression and anxiety, once approached her about being a volunteer.

“’Come work with me’,” Johnson told her. “I’m telling you: She is one of my success stories. She’s off the medication.”

Johnson, who has worked with the Winston-Salem organization Neighbors for Better Neighborhoods, says the garden has had an amazing effect on the community beyond the food it produces. It has improved the way neighbors view themselves.

“This energy in the garden is inspiring the neighbors to do something to their property,” Johnson says.

Rosa Johnson  in the community garden in the Boston-Thurmond neighborhood.