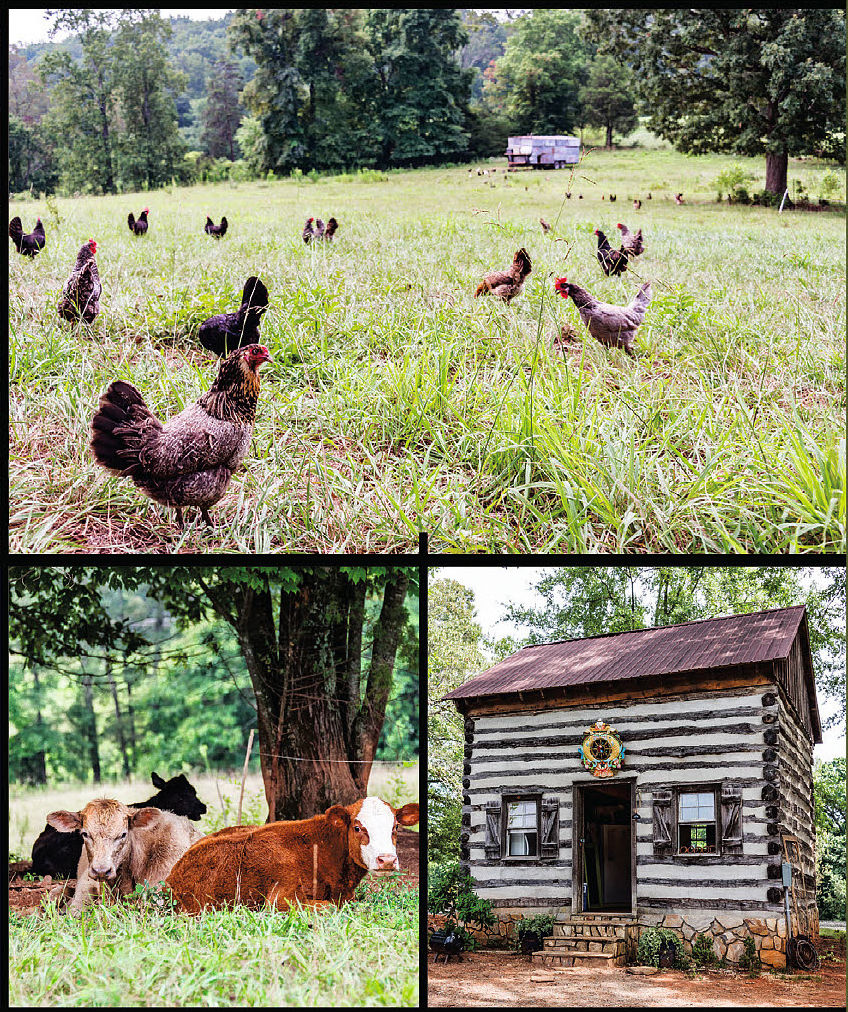 Free range chickens and cows are among the many sights at NOMAD. The farm also features a Cabin Store that's open every day but Sunday and operates on the honor system. 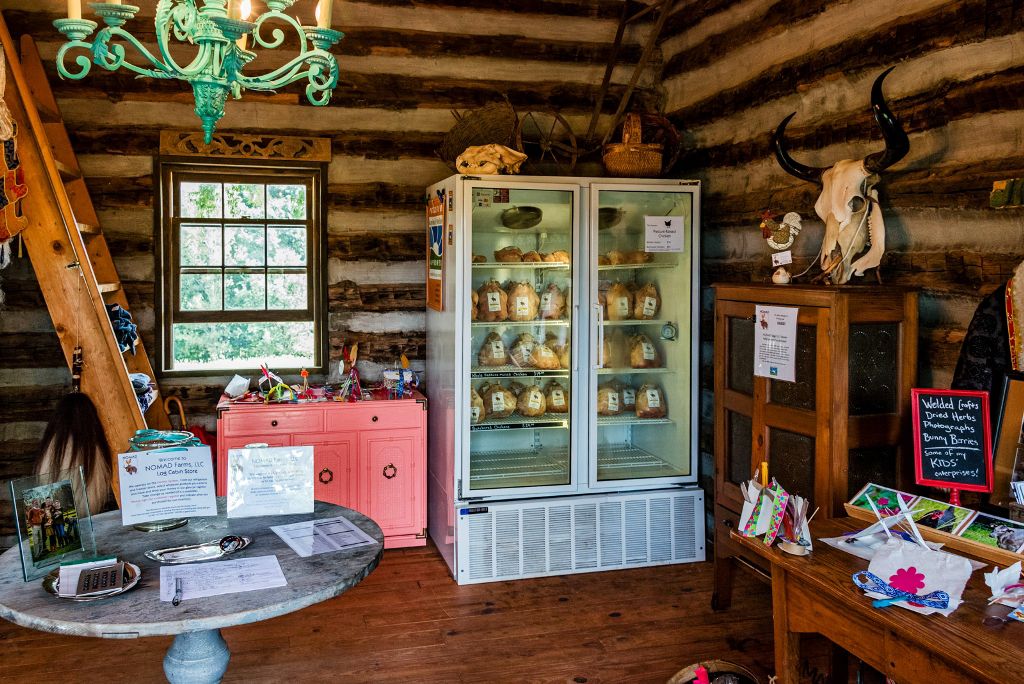 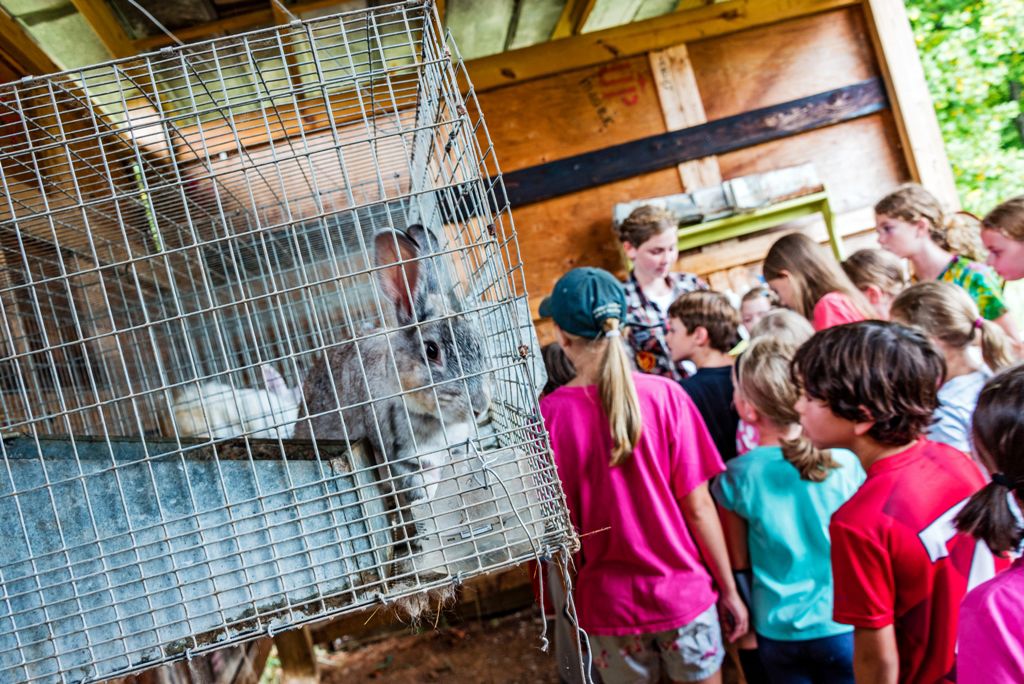 Turn right at the mailbox with the chicken on top.

Those are the directions you’ll need to find NOMAD Farms, a 2-year old farm in Tobaccoville. After making the turn, you’ll hear the sound of car wheels on a gravel road. You’ll pass a metal grain bin, a log cabin, and cows grazing under white oaks. You’ll see a wrap-around porch covered with flip flops and empty egg cartons.

The scene is as pristine as a painting yet rooted in simplicity, just as owners Dana and Mark Nicholson intended it to be.

The Nicholsons are nomads themselves—always working, roaming, and searching for their higher purpose. Together they raised Bowen (16), Scottie (14), David (13), and Ellis (10) in the Tibetan Plateau, where they served as missionaries for nearly a decade. They lived in a remote town that sat 11,000 feet above sea level, and they heated their home with yak dung and coal. The kids slept on concrete beds that were warmed by radiating coals. Conditions were often harsh, but in many ways, the slower-paced lifestyle satisfied their souls.

“I never would have signed up for it if I had known the difficulties in advance,” Dana says. “But now that we have come through, I would never, ever trade it.”

When the Nicholsons moved back to North Carolina in 2014, they refused to step into the fast lane. Farming was a new venture for them, but they were eager to replicate what they’d learned from their Tibetan friends and herdsmen. They purchased a 100-acre piece of property in Tobaccoville—sight unseen—and began working the land with principles they learned in Tibet.

“It seemed normal,” reflects Dana. “We’ve walked through a lot of doors by faith, not knowing what would be on the other side.”

Unlike most farms, where the livestock is confined to one area, animals at NOMAD move around in small groups and are rotated to fresh pastures. “Cows eat grass. Pigs root and wallow. Chickens peck for bugs and fresh salad,” explains Mark. “We let animals do what they are designed to do.”

Each of the children has also taken on an important role at the farm. Bowen has always had a fascination with pigs, so he claimed that enterprise from the beginning. His pork business is now booming with offerings ranging from breakfast sausage to pork chops to ham and ribs—all of which are sold by the pound at NOMAD’s on-site cabin store and at local farmers markets.

Over the past year, Bowen and his friend, Ben Bost, also agreed to take over the whole chicken venture. “That’s a huge responsibility,” admits Dana. “It’s our centerpiece.”

One of the newest offerings at NOMAD, pastured raised rabbit, is being run by Scottie and her friend Hailey Geer. Scottie also grows her own fresh herbs, which are displayed and sold at the cabin store.

The kids grew up around their Tibetan friends’ sheep (which often roamed in and out of their home), so it’s no surprise that sheep now fill the farm. David was the first to stake his claim to raise the sheep and, in turn, his lamb shanks have a loyal following.

Ellis is in her second year of growing flowers and enthusiastically designed a “you pick” patch that will one day be open to customers. She also has a love for cats, so she takes care of the farm kittens that patrol the property and fend off the mice.

The cabin store has a story, too. Originally an old tobacco barn in Westfield, it was dismantled log by log and transferred from the previous owner’s land to NOMAD, where it was reconstructed with a new foundation, flooring, and a loft added. It now houses family photos, Tibetan treasures, and colorful farm fresh eggs, along with freezers full of pastured pork, whole chicken, grass-fed beef, lamb, pastured rabbit, and occasional veggies. The cabin is open six days a week and operates on the honor system.

The Nicholsons believe that to fully connect with the land, it’s important to keep things local. That’s another reason they believe in educating children about the benefits of clean living and eating. Summer camps are offered for kids who crave an “educational and dirt-under-the-fingernails experience.”

Add it all up, and you’ve got a place where life experiences and shared passions unite.

“It’s not just about doing the work or giving the tours or even selling our products,” says Mark. “It’s sitting down for dinner and knowing that we did this. We grew it, we cared for the land and the animals, and we can feel good about all that went into it—and especially what didn’t go into it.”

Free range chickens and cows are among the many sights at NOMAD. The farm also features a Cabin Store that's open every day but Sunday and operates on the honor system.