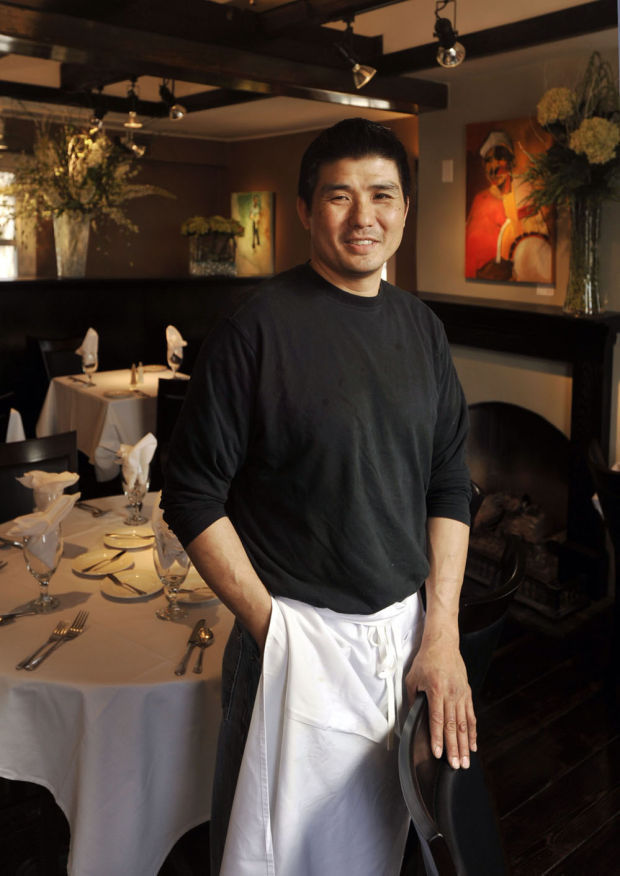 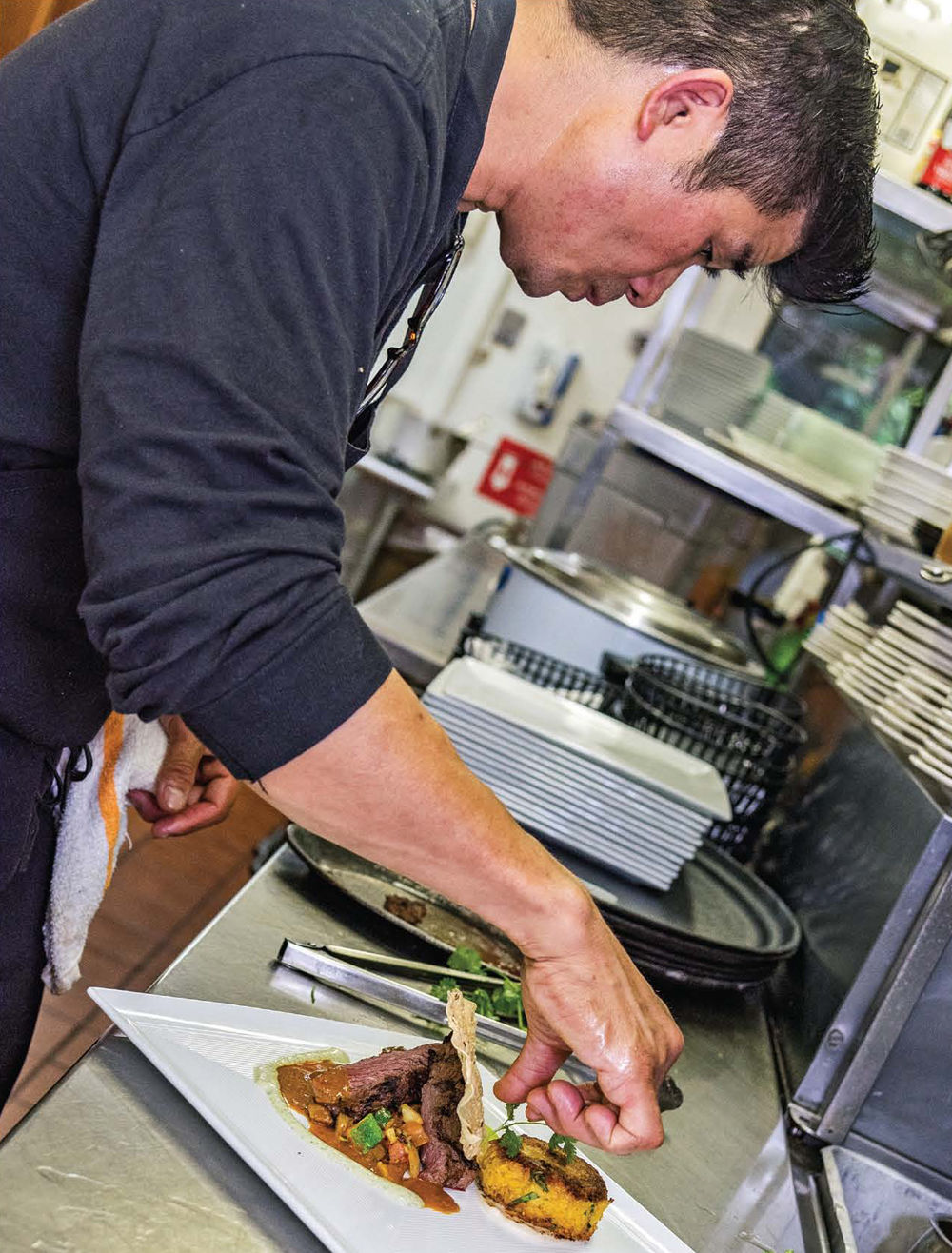 Freddy Lee preparing dishes in the kitchen of Bernardin's. 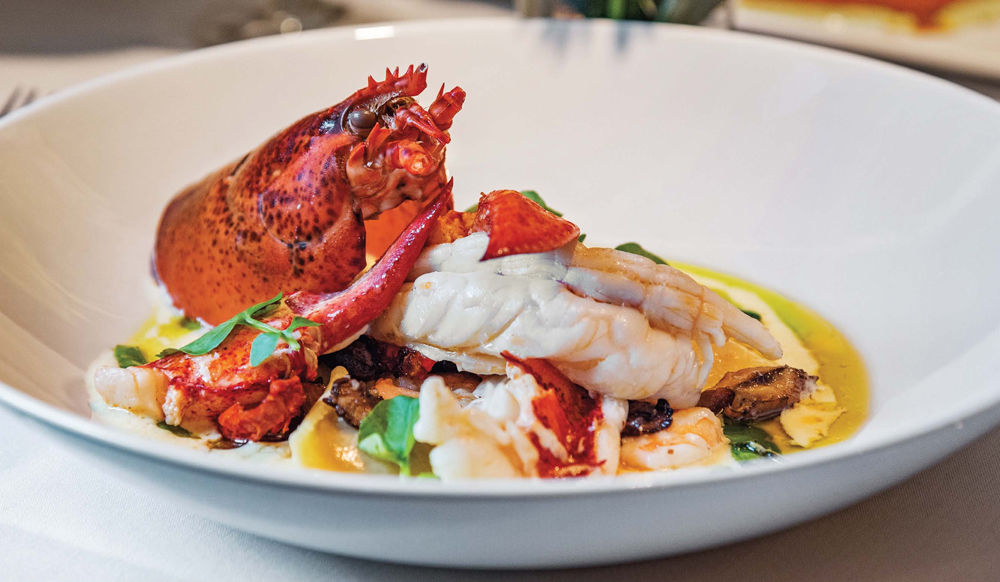 Terry Lee runs the front of the house at Bernardin’s on Fourth Street in downtown Winston-Salem. Brother Freddy is the chef. They have been business partners for some 20 years now, and during that time Bernardin’s has earned a reputation as one of the region’s most respected fine-dining restaurants.

Ambiance is part of it. Bernardin’s is located in what is said to be the oldest home in Winston-Salem, the 1815 Zevely House. The small rooms, intimate spaces, white tablecloths, fresh flowers, and impeccable service always place it high on lists of most romantic spots for a date or a Valentine’s dinner. But, really, its consistently high marks are about the food, the joy of the table, and ultimately, chef Freddy Lee.

Terry describes Freddy as “the adventurous one—the risk taker.” Together, they own three other restaurants—Bleu off Stratford Road, Bernardin’s in Charlotte, and Blue Fin in Columbia, S.C.

Their sister Caroline, who recently moved here from Hamburg, Germany, is an owner of Hakka Chow, the beautifully appointed Asian restaurant off Hanes Mall Boulevard. Freddy helped launch that venture and trained its kitchen staff.

Talented as he is, the culinary wizard tends to fly below the radar locally. I had several outstanding meals at Bernardin’s when it was on Jonestown Road before inquiring about the kitchen. When other chefs were smothering mussels in thick, gooey tomato sauce, Freddy was presenting them in a delicate butter, garlic, herb, and wine sauce that sang. He could make a simple stir fry almost magical. And he treated diners in Winston-Salem to butter-rich classic sauces when gravies thickened with flour—as my mother did often—were the order of the day.

Until recently, local chefs—even very good chefs—got little personal recognition in Winston-Salem. It was still several years later that I invited Freddy to join other top-tier local chefs and restaurant owners for a Saturday breakfast gathering. I had been bragging about the food and recommending Bernadin’s and was determined to meet the chef whose culinary skills prompted my accolades. He came.

Despite all this, if Freddy weren’t an interesting fellow, I would not be writing now. For starters, he was born in Calcutta, India, where his parents were in the import/export business. He came to New York and as a teenager got a job working in an Italian restaurant in Brooklyn. As he gained cooking skills, he found jobs in fine-dining restaurants in the city, eventually enrolled in the Culinary Institute of America (CIA), and graduated, thoroughly schooled in classic cooking.

His interest in and devotion to French culinary techniques was kindled by an internship at a fine-dining restaurant in Paris. He found plenty of opportunities to apply those techniques in top-drawer New York restaurants such as Cite Grille (now closed), Tribeca Grill, River Café, and Manhattan Ocean Club before he came to Winston-Salem to join Terry in the mid-1990s.

Freddy makes everything in house. He speaks of the staples of French techniques including complex broths and reductions. Decades ago, these processes would have been a key component of what was labeled “continental” dining—a phrase seldom heard now. But in the end, he said, “French” is more about devotion to quality ingredients. Our current farm-to-table movement is very much in the French tradition of basic respect for the essential characteristics of ingredients.

“You cannot start with low-quality ingredients and end up with extraordinary food,” he says. He searches for the best fresh ingredients and changes his menu as he discovers new sources or the seasons change. Being the adventurous sort, Freddy often surprises diners with choices of less-served meats such as emu, ostrich, bison, venison, and even kangaroo.

I asked about his extraordinary escargot—my favorite at Bernadin’s—to which he responded: “Diners are a lot smarter now that travel is easy, there are food shows, and you can find almost everything on the Internet. Like you, they ask a lot of questions. I like to hold back just a little,” he said, laughing. I was awed when he told me the ingredients of his sauce, which included two liqueurs, house-made chicken and shellfish stock, chanterelle mushrooms, and more.

Terry summed up their overriding mission at all their restaurants: “We want to serve the best food in town,” he says. “As a fine-dining restaurant, we have to work to preserve our quality and uphold our standards. There is more competition now, but we welcome that. It makes us better.”

Freddy Lee preparing dishes in the kitchen of Bernardin's.