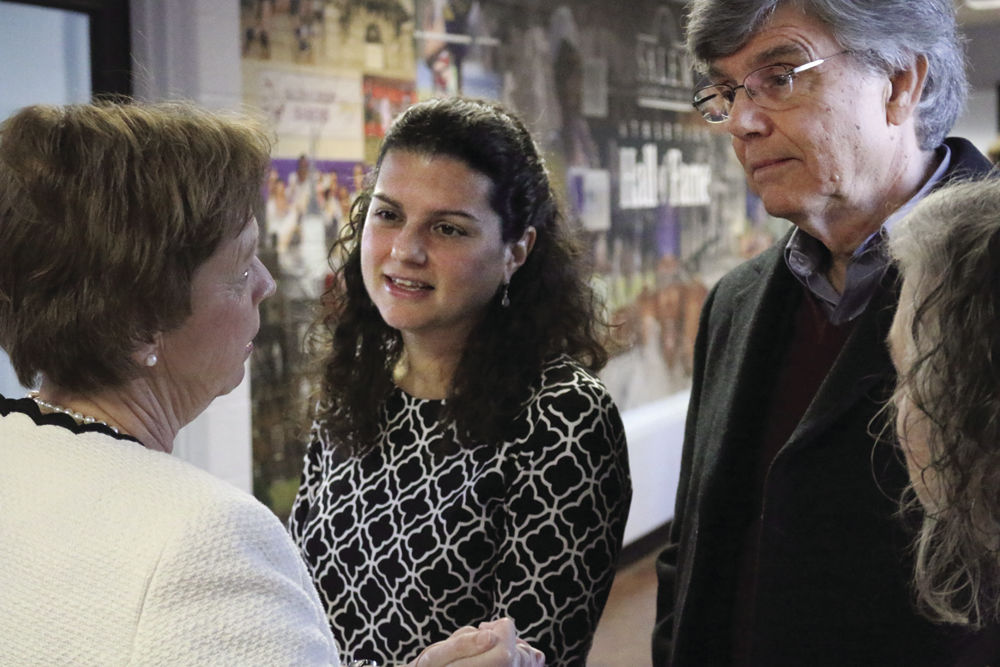 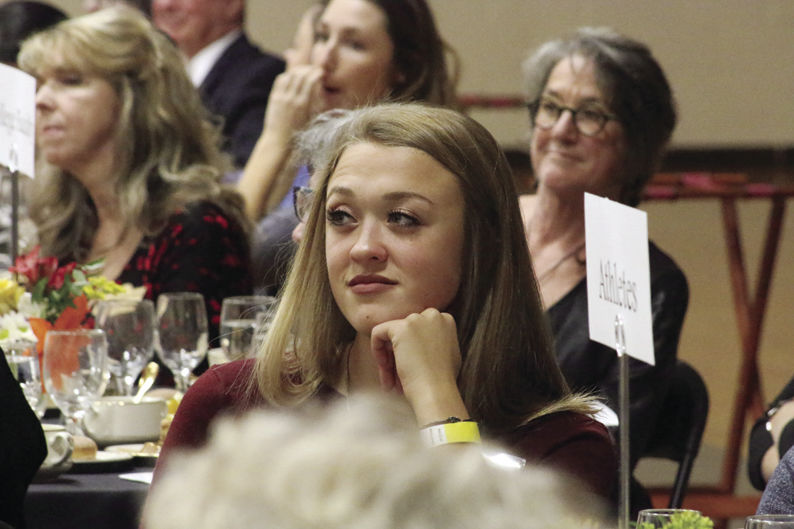 On Feb. 9, six former students of Salem Academy & College were inducted in the newly established Athletics Hall of Fame. 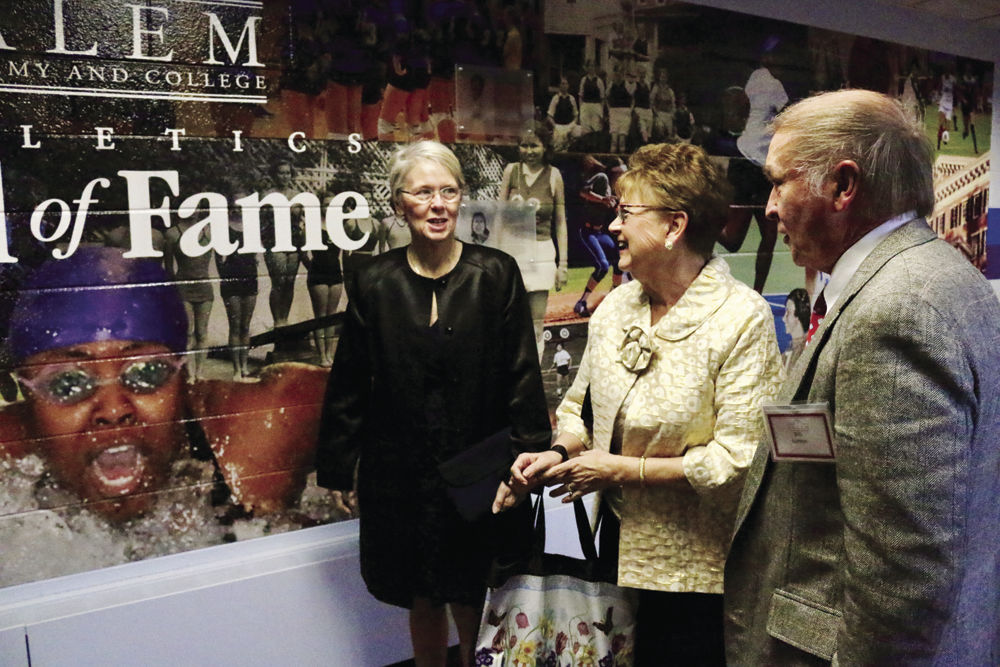 The goal of the Hall of Fame is to honor former student athletes and administrators.

“I think the other competitors are on a really high level, and that’s not how I see myself,” Watson says. “I’m still surprised, delighted to be included.”

Patricia Hughes, the athletic director for Salem College, says not to worry; Watson’s athletic achievements have made her a worthy hall of famer.

“She overcame great challenges,” Hughes says. “She’s one of our great success stories.”

At age 11, Watson was diagnosed with Type 1 diabetes. But she plowed ahead.

She joined a friend in trying out for the Salem Academy tennis team, but didn’t make the cut.

“Lorie Howard, the tennis coach [at the time], told me I had some athleticism,” Watson says. “So she suggested I try out for the field hockey team.”

She did, and she also tried out for soccer.

Watson lettered three times in both field hockey and soccer, and was basketball team manager from 1992 to 1994. She received various awards, including the soccer MVP award in 1994.

Watson attended Bucknell University in Lewisburg, Pa., to play field hockey, but transferred back to Salem for her sophomore year. She played three years of collegiate field hockey and soccer. During college, Watson coached JV and varsity field hockey at Salem Academy for a year. After graduating from Salem in 1999 with a degree in Spanish, she went on to coach for another year.

Then her involvement in raising funds for diabetes ratcheted up.

She later ran five marathons and 11 half marathons, and since 2010, she’s raised more than $30,000 for the Juvenile Diabetes Research Foundation.

It’s clear why Watson was considered for Hall of Fame induction.

The goal of the future Hall of Fame is to honor former student athletes, administrators, and others who have been integral to the Salem Academy and College’s athletics programs — people like Watson.

Salem Academy and College is split into two different campuses; Salem Academy is a boarding and day school for grades 9 through 12 while Salem College serves as one of the six higher education institutions in the city. Folks from both schools were be inducted in the Hall of Fame.

Lorie Howard, who has been athletic director for Salem Academy for the last 29 years, says the Hall of Fame was Hughes’ idea.

While Hughes has only been athletic director for Salem College for the past 18 months, she made the Hall of Fame one of her first orders of business.

“Establishing an Athletics Hall of Fame has been a goal of mine since I came to Salem a little more than a year ago,” said Hughes in a December press release. “We believe it’s important to honor and remember forever the legacies and achievements of Salem’s athletes, coaches, teams, and supporters to reinforce the wonderful history and tradition of Salem Academy and College athletics.”

Hughes says the inductions will be ongoing, perhaps annually or biannually.

The whole experience has been surreal for Hughes, who still chuckles over an encounter she had after she first suggested a Salem Hall of Fame.

“Someone said, ‘Why do that? We haven’t been around long enough,’” Hughes says. But the institution, she pointed out, has been around 247 years.

A banquet and ceremony was held Feb. 9 to honor the inaugural Hall of Fame class and the new Hall of Fame Showcase inside the Bryant Hall Athletic Center was unveiled.

“We talked about the traditions at Salem Academy and College,” Howard says. “All of the inductees made such significant contributions to the institution. It was an incredible evening, a feel-good night.”

The other Hall of Famers

Several more former students were inducted in to the Hall of Fame for their contributions to Salem Academy and College.

Sally Colhoun Engram (Salem Academy ’75) was a two-sport athlete during the early years of organized sports at the school. Engram lettered three times in varsity tennis and twice in varsity basketball. She attended Sweet Briar College, where she played varsity tennis as a freshman and sophomore, and was named tennis team captain during her sophomore year. In 1977, Engram transferred to the University of North Carolina, where she competed on the JV tennis team and later received a bachelor’s degree in political science.

Jane Barkman Brown (Salem College ’74), was a three-time national swimming champion (once in 1965 and twice in 1968). She won two Olympic gold medals and once set a world record as a member of the U.S. team’s women’s 4x100-meter freestyle relay team. She later coached collegiately at Tennessee University, Princeton University, Old Dominion University, and Penn State University.

Dianne Dailey (Salem College ’71) served for 30 years as head women’s golf coach at Wake Forest University and retired following the 2017-18 season. Dailey, a four-time ACC Coach of the Year, was named LPGA Coach of the Year and inducted into the National Golf Coaches Association Hall of Fame in 2001.

Robert E. Esleeck, now a retired Winston-Salem attorney, is a former member of the business faculty at Salem College. Esleeck conducted research and oversaw the institutional application process, leading the school’s entry into NCAA Division III in 2008. He also is credited with enhancing Salem’s athletic fields and facilities.

On Feb. 9, six former students of Salem Academy & College were inducted in the newly established Athletics Hall of Fame.

The goal of the Hall of Fame is to honor former student athletes and administrators.