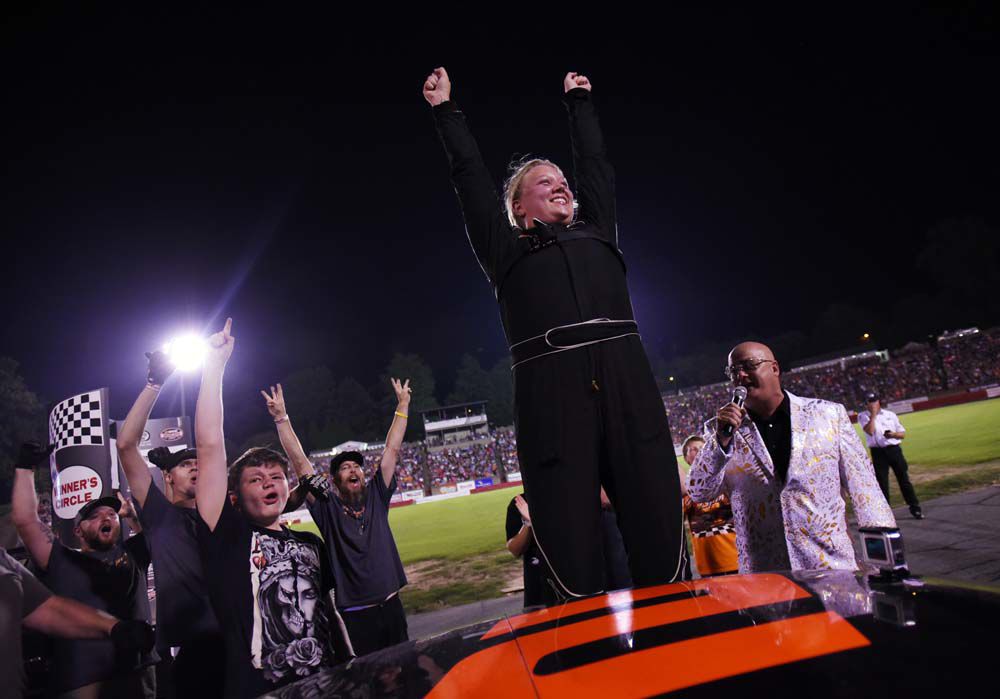 Amber Lynn holds off Tommy Neal for the win in the first Sportsman Series race, Saturday August 3, 2019 at Bowman Gray. 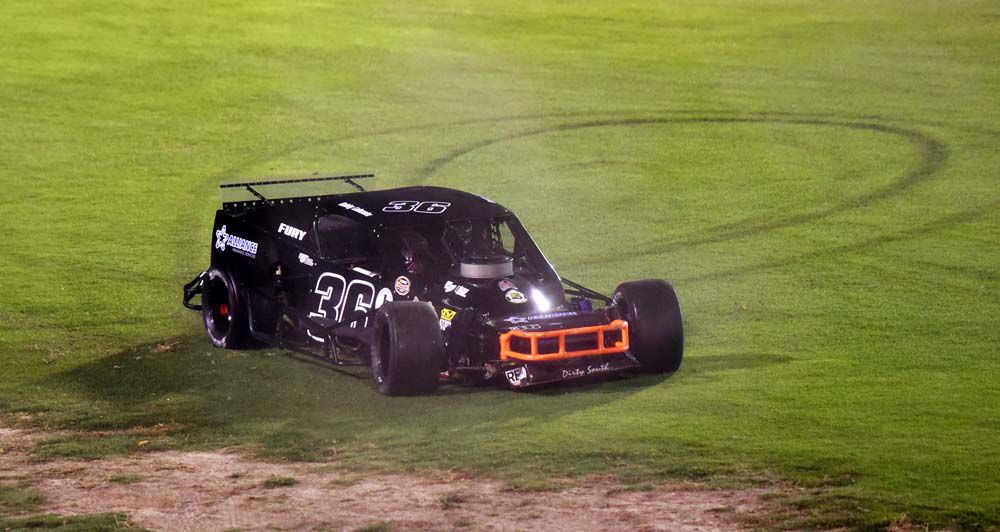 Bobby Labonte gets caught in the infield early in the second Sportsman Series race, Saturday, August 10, 2019 at Bowman Gray.

Bowman Gray Stadium — the multi-series short track NASCAR venue — begins yet another season on April 18 amid a renovation project that will upgrade the stadium and welcome the return of four-time returning Modified Division champion Burt Myers. If last season is any indication, it’ll be more than just dust kicked up at the historic track.

Here are a few things you can expect ahead of the stadium’s 72nd season:

It wouldn’t be nicknamed “The Madhouse” if things didn’t, well, go a little mad every so often.

Case in point, as if the Stadium Stock Division’s longest race of the season needed any more excitement: a post-race bout between two of the division’s top racers, Brandon Brendle and A.J. Sanders, following a late-race bump and pile up in the corner that ended in Brendle being taken away in handcuffs. He was detained but not charged, and no fines or suspensions were issued.

Brendle, Sanders, and Chuck Wall were the top trio in the division for most of the season. But Wall finished on top with 666 points, 16 more than Sanders and 38 more than Brendle, edging out Sanders by two spots in the final race of the season.

There’s some history here for sure, if not some bad blood. It’s a division and a match up to watch.

Burt Myers, the latest in a long line of Myers family racers to take the track, won his fourth consecutive Modified Division championship last August. It was his 10th all-time, tying him with rival Tim Brown for the most Modified championships in stadium history. He finished with 649 points, 23 points ahead of second place James Civali and 43 points ahead of Brown — climbing back up the ladder after a rough first four races. A division that has been dominated by Myers and Brown for the last 15 seasons; there have only been three seasons over the past 17 years where neither one of the pair have won championships.

Too close to call

Justin Taylor, one of the more consistent drivers last season, won the Sportsman Division by a comfortable margin, finishing fourth in the final race. But Taylor is done racing for points, citing a weekly grind that took a toll on him. Tommy Neal — who finished second overall with 676 points — or Dylan Ward, in third with 658, could fill that void.

In November, Winston-Salem city officials moved one step closer to a planned $9 million renovation project that would upgrade Bowman Gray stadium for stock car racing and for Winston-Salem State University football. Construction will continue while the stadium is in use, scheduled as to not interfere with weekly activities. The renovation was first announced in November 2018. Improvements will include replacing concession stands and restrooms, re-grading the football field, resurfacing the race track, and carrying out utility upgrades and repairs. Design work is scheduled to continue until middle 2020, with construction likely starting in in the fall. It will take two years to complete.

Amber Lynn holds off Tommy Neal for the win in the first Sportsman Series race, Saturday August 3, 2019 at Bowman Gray.

Bobby Labonte gets caught in the infield early in the second Sportsman Series race, Saturday, August 10, 2019 at Bowman Gray.