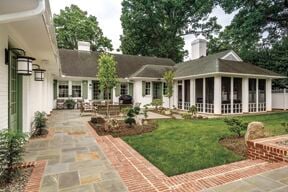 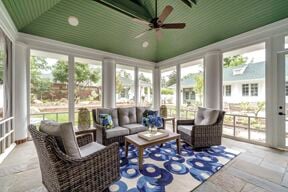 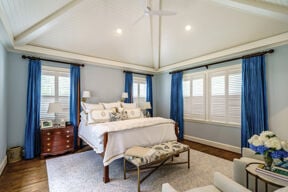 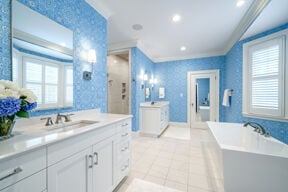 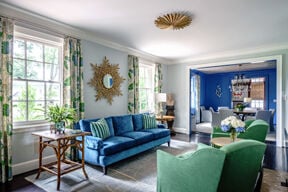 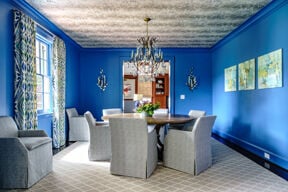 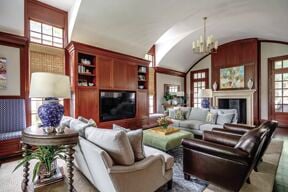 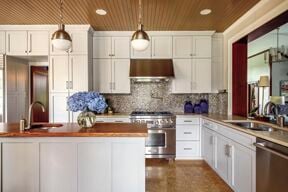 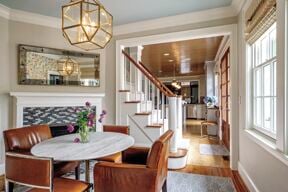 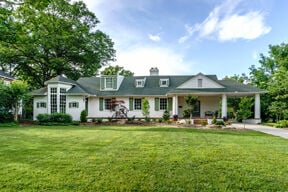 The newly renovated home of Kate and Tim Cooper in Buena Vista reminds one, albeit on a more modest scale, of Winston-Salem’s beloved Reynolda House and its undeniable influence on local architecture.

Built in 1924, a mere seven years after Reynolda was completed, the Coopers’ home may not be one of the documented dozens of Charles Barton Keen commissions that dot the region, but it is a home that was no doubt inspired by the Philadelphia architect’s popularity among the affluent at the time.

Painted white and accented in what Reynolda House’s curator Phil Archer describes as the “timeless shade of green that has become the visual symbol of Reynolda,” each of the Coopers’ three-leaf, clover-pierced shutters on the home has its own special meaning: faith, hope, and love. Beneath the home’s modest green shingled roof, the house also boasts a row of thick Tuscan columns across the front porch and porte-cochere, or the awning that provides covered access for visitors and guests arriving by automobile.

For the Coopers, who raised their children just around the corner, the annual sight of a Christmas tree showcased in the large bay window every holiday season remained a source of wonderment for Kate.

“I always tried to imagine what [the house] was like inside,” she says.

Like most houses nearly 100 years old, the Coopers’ new place had had its share of additions and updates. Former homeowner and local architect Stuart McCormick had made the house his own by adding a spacious family room and screened-in porch, and he renovated the master bedroom and bath.

McCormick’s design approach was, not surprisingly, sensitive to the house’s original character. So when Cooper’s interior designer Wendy Barclay walked through the house she encouraged her client to bring the architect back to the drafting table.

“When I first visited the house,” says Barclay, “I suggested that the master bedroom/suite area be renovated to match the scale and style of the barrel-ceiling family room that had been added by architect Stuart McCormick.”

To the Coopers’ delight, the president of Lambert Architecture was happy to oblige and provided the Coopers with the architectural drawings they needed to make the design changes to their new home.

“We believed we could make the house exactly what we wanted without changing the original character that drew us to it in the first place,” Kate says.

That latest renovation includes a new master bedroom wing that does indeed match the formerly designed family room in its scale and style. The separate master wing features a large master bedroom, bath, closet, and laundry room. The Coopers also opened up the space between the living and dining rooms, updated cabinetry in the kitchen and the mudroom, and created a new outdoor living space.

Of course, pulling everything together fell to Cooper’s talented decorator Barclay who has redesigned, renovated, and refreshed a number of rooms with Cooper over the years and in several different houses.

“Because the new house had far fewer rooms than their previous home,” Barclay says, “the Coopers sold or donated much of their old furniture.”

That purge gave Barclay the freedom to design a fresh new look for the Coopers’ new home.

“Kate’s favorite color happens to be blue,” she says, who used a favorite painting that hangs over the fireplace in the living room as their muse. “The blues and greens so prominently featured in that painting inspired the color palette of their home’s new design.”

In the end, faith, hope, and love ultimately brought Kate and Tim to what she calls their “perfect last house.” And as fate would have it, the Coopers had “luck” on their side the whole time.

Charlie Lovett greets me in his carport, careful to keep his distance. He’s wearing a mask of his wife Janice’s making — one of hundreds she’s…

Ralph Lauren once wrote that “white in design has no competition,” and “white is simple, elegant, and fresh.”