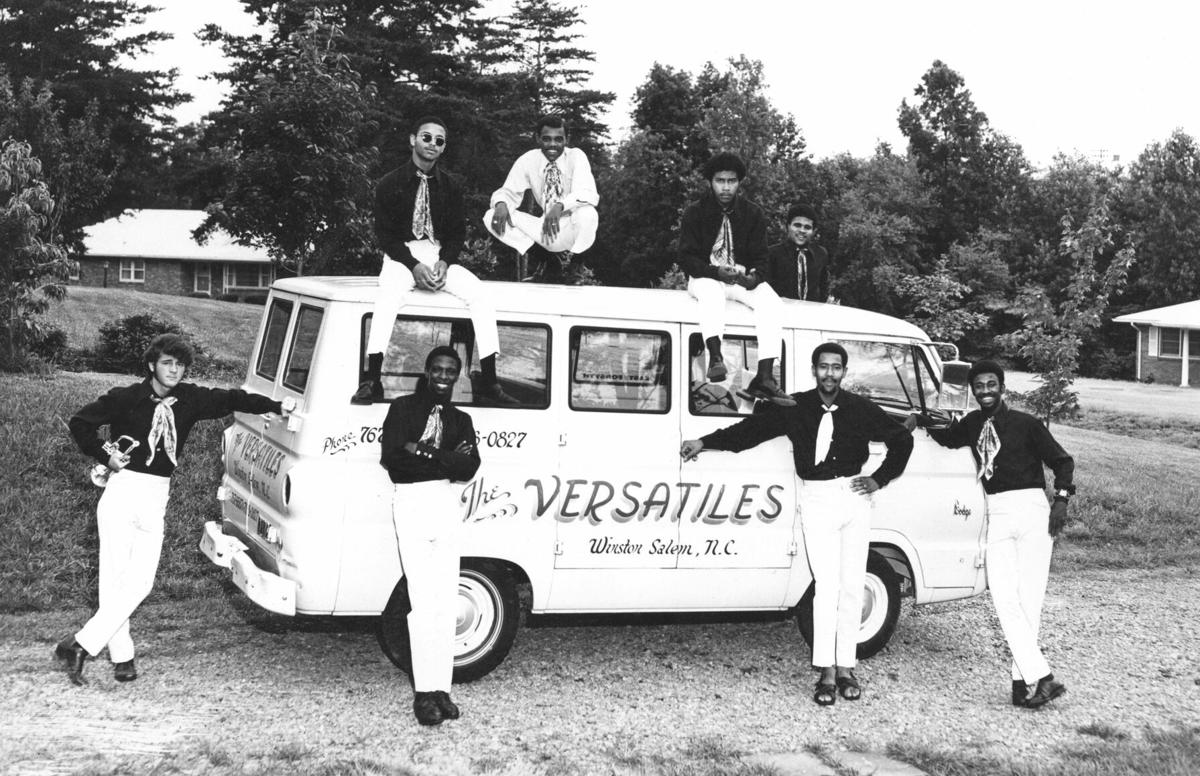 The Versatiles made a big splash in the Winston-Salem music scene in the mid-1960s. 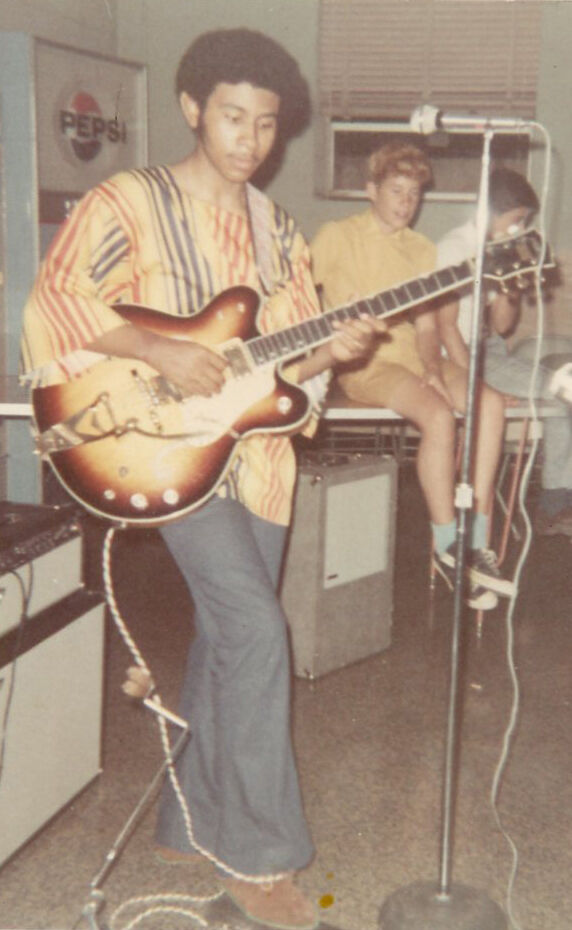 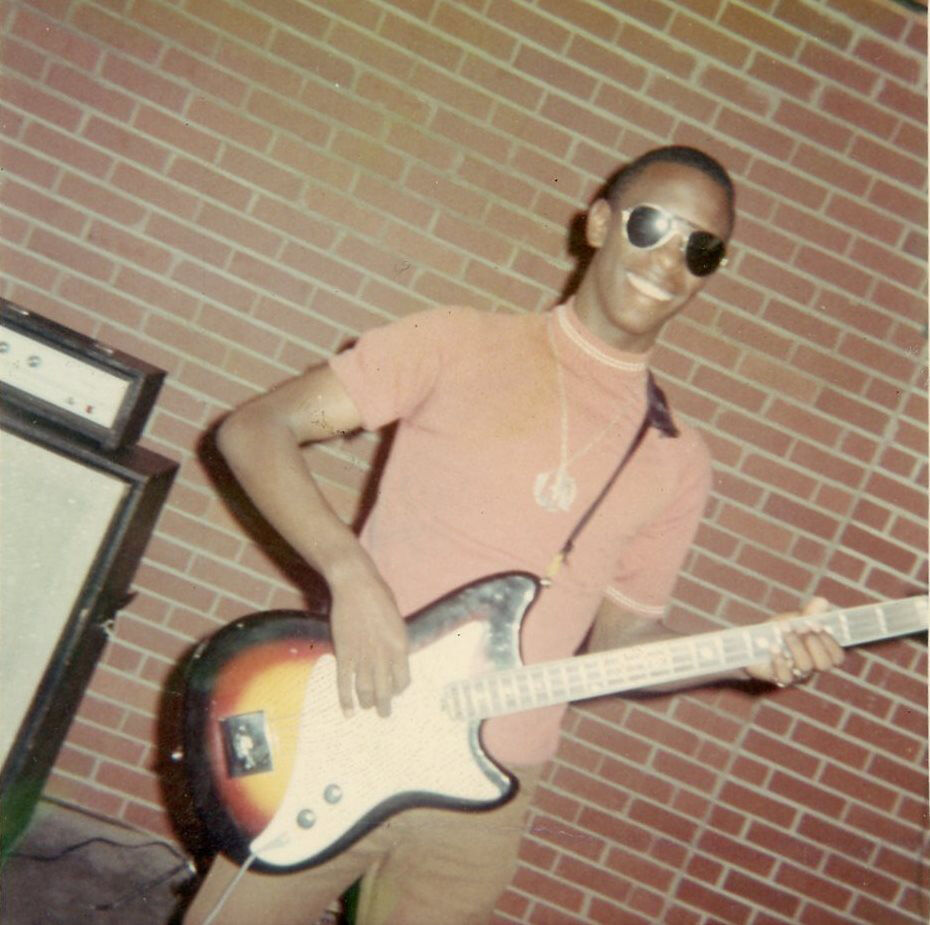 Charles Patterson plays guitar at Bishop McGuinness School in 1968. The school offered these dances twice a month to promote a biracial activity for the youth.

They played for dancers and skinny dippers. They backed Aretha Franklin’s sister. They tore down a KKK billboard. They almost made it onto a big TV talent show. They won a battle of the bands that allowed them to record a glorious artifact: a 45 RPM single with two of their original songs.

“We were called ‘versatile’ because we played more than one instrument,” says Chambers, who mostly played organ.

“And more than one type of music,” adds David Teague, who played trumpet. “Whatever somebody asked, we would try to play it for them.”

Their versatility took them to proms, supper clubs, dive bars, talent shows and the Dixie Classic Fair. Once they got booked at a venue where the audience expected something very different from their usual selection of soul hits. So they improvised, recalls Jason “Skip” Hawkins, who played alto saxophone. He calls out to bass player Charles “C.P.” Patterson.

“Hey C.P. – you remember when we went up to, uh, I think it was Morganton?” Hawkins says. “That was when we were supposed to be this Dixieland jazz band? People kept talking about, ‘What can y’all play?’ Charles said, ‘I got it.’ He started playing ‘Rawhide.’”

Calling Patterson “C.P.” distinguishes him from the other Charles in the band: the late Charles Green, hotshot guitarist. They decide the Dixieland incident, reminiscent of a scene in “The Blues Brothers” movie, actually happened in Rutherfordton.

“We played ‘Rawhide’ for about 30 minutes,” says Sam Hamlin, the Versatiles’ lead singer. “That was the only country and Western song we knew.”

Other members of the group were James “Jay-O” Warton, tenor sax; Avery Cockerham, alto sax; and drummer William “P.T.” Peay, who died in 2019. Gordon Shannon stepped in on organ after Mac Chambers left to launch the Rhythm Method, which included Teague as well as another hotshot local guitarist, Sam Moss.

Most of the Versatiles played in the bands at Atkins and Carver high schools. The Versatiles had a mother hen to keep them all on track: Gwen Green, Charles Green’s mother. Charles died in 2006, but Gwen is still alive and well. She started out singing folk songs like Bob Dylan’s “Blowing in the Wind” with her son.

“I dedicated my life to them,” she says. “I took time to take care of them, go to church, sing in the choir, do my work, teach school and go to my sorority meeting, and that was it.”

Around the long, crowded table at Milner’s, band members call out things she did for them, including buying an organ for one and a motorcycle for another.

“Let me tell you,” she says. “If they didn’t have an instrument, I bought it.”

Patterson bought his bass with prize money they won from a battle of the bands at Bowman Gray Stadium. The prize also included a session at Copeland Studios in Greensboro. A Winston-Salem radio DJ – Peter Berry, known to WTOB listeners as the Flying Dutchman – produced the record: “Oh Yeah” backed with “Where Did You Go.”

The single also displayed the band’s versatility, leaving a tantalizing taste of what might have been if the Versatiles had made more records and found success beyond their home state.

“Oh Yeah” is an up-tempo stomper reminiscent of the Miracles or Jackie Wilson. “She said, ‘Uh, listen here, Sam, don’t you be no fool, uh, no, no,” Hamlin sings. “Keep your hands to yourself and maintain your cool!”

The flip side, “Where Did You Go,” is a gorgeous ballad written by Hamlin and Greene; the band adeptly backs Hamlin’s soaring, crying vocals – including a thrilling falsetto turn near the end. These days, copies of the Cheeco Records single sell online for $65 and up.

The closest the Versatiles came to national stardom was a successful audition for “Ted Mack and the Original Amateur Hour,” a long-running TV talent show. They made the finals, but the show’s producers disqualified them when they learned Shannon was above the age limit for the competition, Patterson says. Charles Green made his mark in later years, including an appearance in the 1978 movie “American Hot Wax” about legendary DJ Alan Freed.

The band members went their separate ways around 1968, pulled apart by forces like college and the military draft.

Patterson served in Vietnam before returning to a career in banking. Cokerham ran a lawn service. Teague is the band director at New Philadelphia Moravian Church and plays in the Salem Swing Band.

Hamlin sang professionally for decades. He produces concerts and still sings beautifully – as when he joins the band playing at the Milner’s bar to sing a few songs, including Prince’s “Purple Rain.”

The group may not have made it big, but they had plenty of memorable moments. They backed Erma Franklin, Aretha’s sister, in a show at N.C. A&T University in Greensboro. (She sang the original version of “Piece of My Heart,” which became a signature song for Janis Joplin.) They backed Patti LaBelle and the Bluebelles, even though they were ill-prepared for the gig.

“We were awful!” one band member says. “We didn’t know her material.”

The group was traveling to a gig in eastern North Carolina when they spotted a billboard outside Smithfield advertising an upcoming Ku Klux Klan rally.

“Man, we’re gonna get that when we come back,” Hamlin told the others. They pulled off the desolate highway in the middle of the night on their return trip.

“We stopped and got the sign, tore it down and put it in the van,” Hamlin says. “They had on the news the rally didn’t have the numbers they expected. People couldn’t find the location. Someone stole the sign!”

One gig was a private party at a home that backed onto a lake. As the night wore on and the alcohol flowed, clothes came off and party goers hit the water. Hamlin was singing a 1963 hit by the Showmen at the time.

“I remember I was singing ‘39-21-46,’ and this girl comes up and stands in front of me and drops her dress and clothes, standing there naked as a jaybird,” he says. “I just kept singing. I’ll never forget looking at P.T. and going, ‘Oh my God!’”

Pearl Monroe Tucker, or Roe Roe as her family calls her, was 3 years old when she started feeling aches in her legs and her arms.

She has a successful yoga studio, the Breathing Room in the West End Mill Works, but Suzy McCalley’s passion project is teaching social and em…

The Versatiles made a big splash in the Winston-Salem music scene in the mid-1960s. 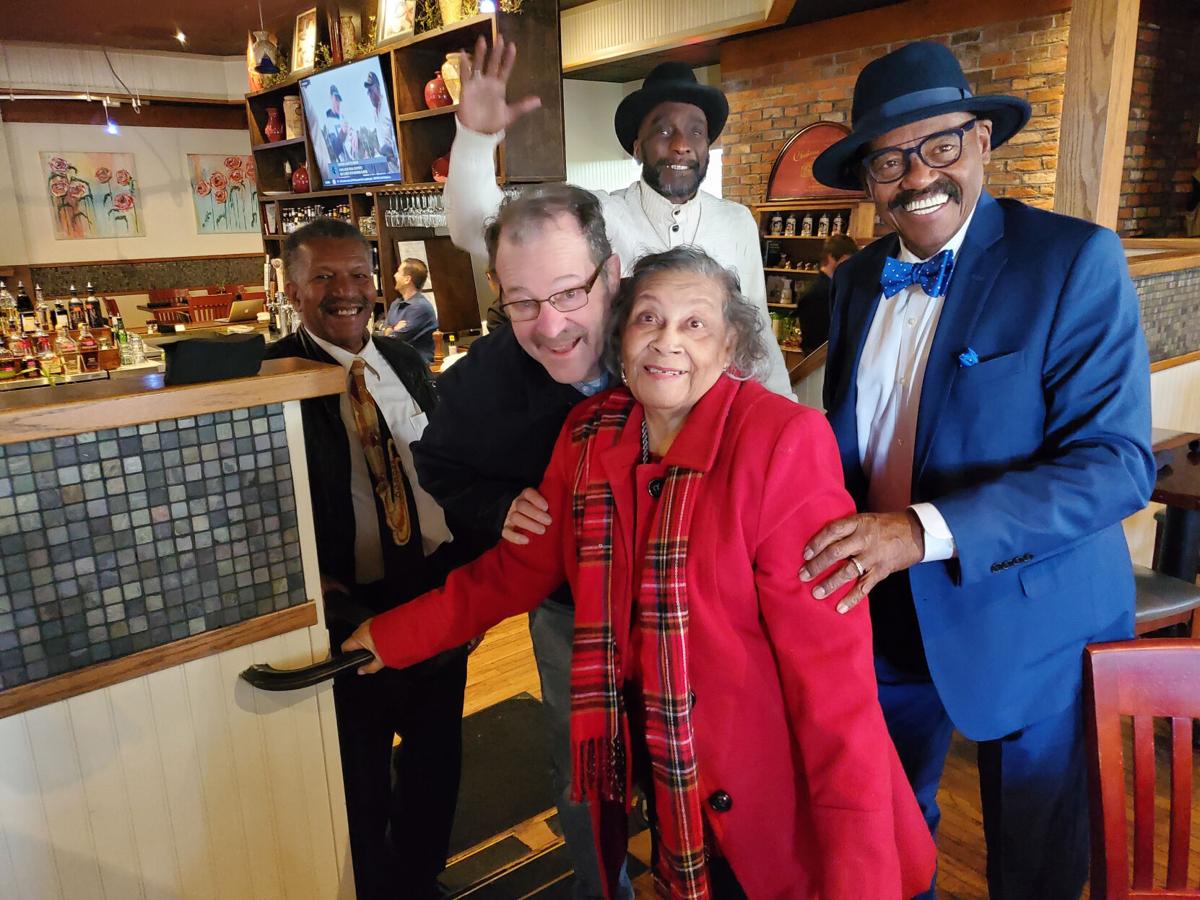 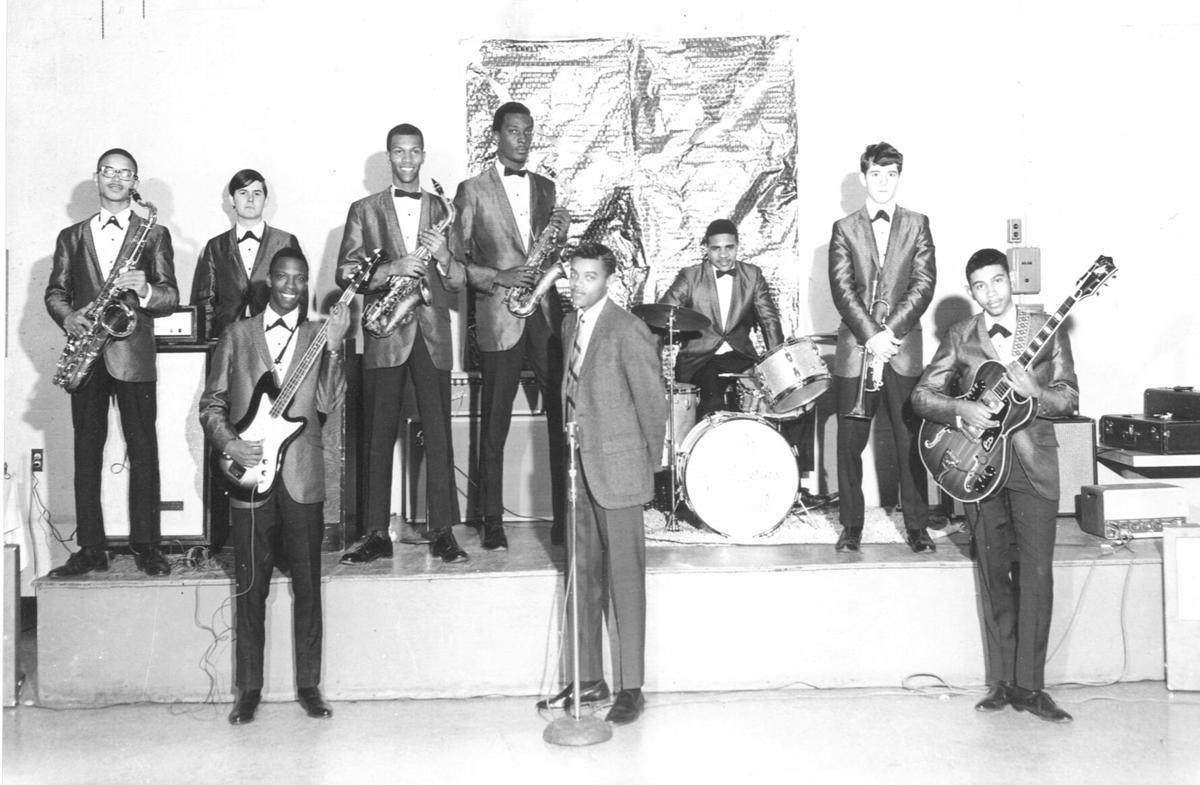 The Versatlines' single offered a taste of what might have been if the band had found success beyond their home state.

Charles Patterson plays guitar at Bishop McGuinness School in 1968. The school offered these dances twice a month to promote a biracial activity for the youth. 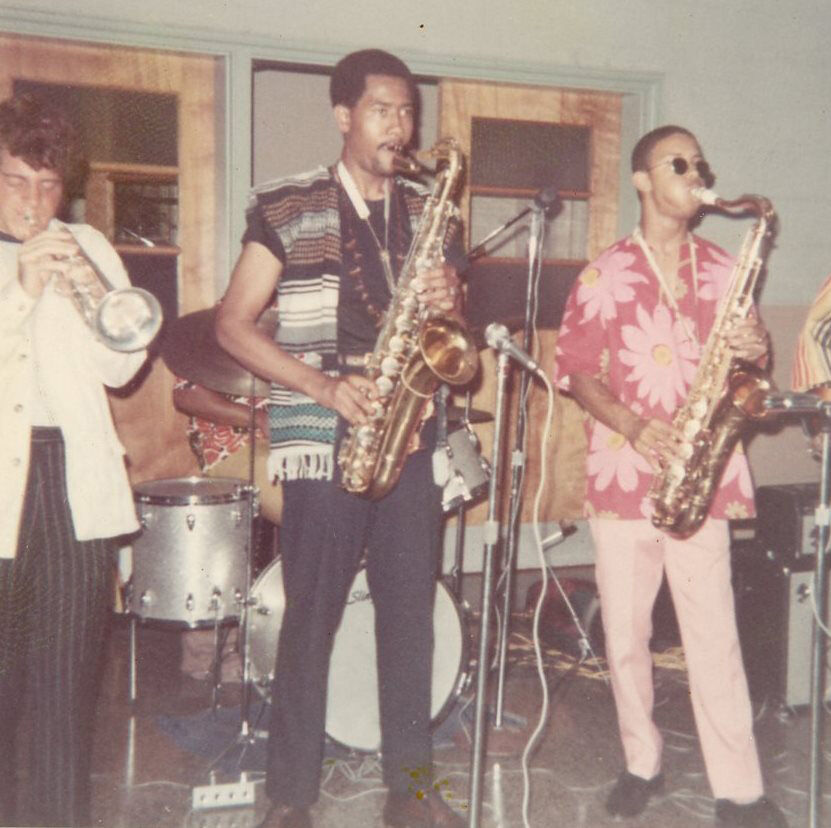 Versatiles members (from left) David Teague, Avery Cockerham and James Wharton perform at a dance at Bishop McGuinness School in 1968.