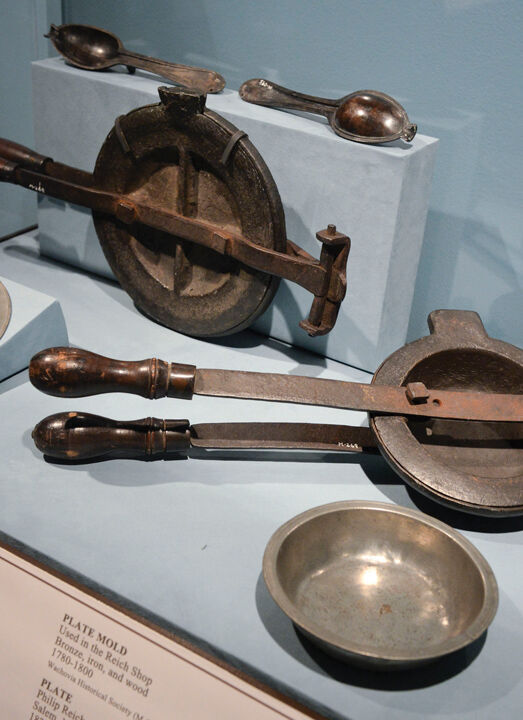 These plate and spoon molds on display at MESDA were referenced in the minutes of the 1911 annual report of the Wachovia Historical Society in 1911. 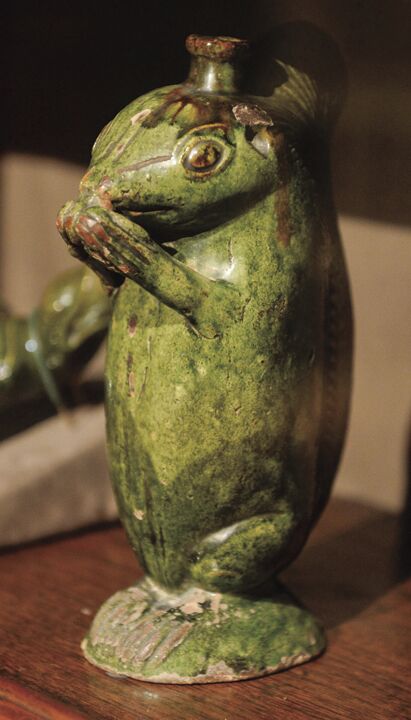 This earthenware squirrel jug is thought to have been made by Rudolph Christ when he was master of the pottery at Salem. Squirrels were popular pets, often represented in toys, art work and ceramic articles in the 18th and 19th centuries.

Paula Locklair pauses to admire a small tin basket on a wooden shelf next to other tin items like lanterns and candle holders.

“Baskets like these were used as little Easter baskets,” Locklair says.

Locklair is a member of the Wachovia Historical Society, an organization that is a steward of the culture of Southern Moravians. She and some other members of the society were getting a rare glimpse of a collection of the society’s historic objects stored in a warehouse near Old Salem Museum and Gardens, a National Historic Landmark District just south of downtown Winston- Salem that was once the Moravian town of Salem.

“They aren’t just objects; they’re objects that speak to you,” says Locklair, former vice-president of education programming and research for Old Salem.

Row upon row of shelves hold things like baskets, long rifles, cooking utensils, pottery and musical instruments. A large section of the warehouse houses larger things like sleighs, carriages, farm equipment and a horse-drawn steam fire engine from 1882. All the artifacts were used in the everyday lives of people who settled and lived in Forsyth County.

Many of the items in the collection were made by the Moravians of Salem. Members of the community were skilled in the crafts of tin and metalsmithing, pottery, textiles, and cabinet and furniture making.

“There’s such a rich story that goes with every object,” Locklair says. “Sometimes it’s the minutia that is so revealing.”

The Wachovia Historical Society grew out of Salem’s Young Men’s Missionary Society, which recognized the need to preserve the Moravian culture in the South. Founded in 1895, it is the oldest historical society in North Carolina and one of the oldest in the United States.

To say that the Wachovia Historical Society is a packrat is an understatement. It began with 194 artifacts. Today, it owns about 6,800 pieces.

But the historical significance of the society’s collection is incomprehensible.

“I feel very grateful for the foresight of all of these people who have taken care of these objects,” Locklair says. “We can credit them with saving some of the oldest and rarest pieces.”

Many of the finer pieces are on display at the Museum of Early Southern Decorative Arts, known as MESDA. Other items are on display in Old Salem Museum and Gardens’ visitor center and historic buildings. Items have been lent to Williamsburg in Virginia.

“It’s a repository of information and tangible objects that relate to the past, present and future of the Moravian culture in Forsyth county,” member John Hauser says of the society’s efforts to preserve the culture.

The Wachovia Historical Society takes its name from the Wachovia Tract, a nearly 100,000-acre parcel of land that is now part of Forsyth County. It was settled in the 1700s by Pennsylvania Moravians. The tract, in turn, took its name from Der Wachau, a place in Austria from which the Moravians came. At the center of the tract, Moravians built the town of Salem, one of the earliest planned towns in America.

But the society is more than a keeper of dusty artifacts and faded documents. Hauser says it fosters a connection between the Moravian culture and a city that owes a great deal to that culture, particularly in the areas of education, engineering, art, architecture, and even medicine.

Winston-Salem is home to several universities and colleges, and Moravians believed education was essential.

“Everyone needs to be educated, not only for their individual well-being, but for the community’s well-being,” Hauser says.

Hauser says the Moravians were early advocates of egalitarian education. Salem College is one of the oldest continuously operated schools for women in the country.

“The Moravians believed not only in art in terms of the art that you could see, but in representational art in their architecture, their pottery, their tin smithing, their silver smithing, their textiles,” Hauser says.

Hauser says the Moravians’ influence on the city’s architecture can be seen in its buildings and bridges.

The Moravians loved music. Many played instruments and all were expected to sing. Hauser says Winston-Salem’s symphony, opera and ballet can, to some degree, credit the Moravians. The city is also home of the N.C. School of the Arts.

“I don’t think there is a coincidence because I think we have a long thread reaching back in time, going back not only to the very first Moravians, but the continuing culture that nurtured an interest in art,” Hauser says.

Hauser says unlike many religions, Moravians did not shy away from scientific advancements.

“Science was never a threat to them,” he says.

And Moravians were among the first to embrace modern medicine.

In the late 1700s, Salem physician Samuel Vierling inoculated Salem residents against smallpox and was a pioneer in dietary health by encouraging people to consume less salted pork and eat more fresh meat, along with seasonal fruits and vegetables. He helped establish a farmers’ market that Old Salem continues to hold weekly.

“It was the Moravian can-do attitude of not being intimidated by knowledge and science,” Hauser says.

Moravians documented it all. From the felling of a tree by one of the earliest forestry management programs in the country to the planning of town streets, they kept meticulous records.

Locklair says there are 13 volumes of records, most of them in the Moravian’s native German language.

“It’s an incredible documentation of one people, one society. It was a very organized culture,” Locklair says.

The Wachovia Historical Society continues to work closely with Old Salem, MESDA and other historic areas within the former tract that include the historically designated villages of Bethabara and Bethania, and Moravian congregations of Friedberg and Friedland.

“Today, most people look to Old Salem Museums and Gardens as kind of fulcrum, that center point to learn about (Moravian Culture),” Hauser says.

Last year, the Wachovia Historical Society celebrated its 125th anniversary. In addition to its annual meeting, which typically includes a scholarly talk, the society holds enrichment events like the upcoming 15th annual Share the Heritage, which will be held virtually this year. All events are open to non-members.

Hauser says the society continues to insure the Moravians’ place in the fabric of Forsyth County and in American history.

“I think that’s why the Wachovia Historical Society is so important today. It’s that connection of where we’ve been, where we are and where we might go,” Hauser says.

Of the 5.5 million family controlled businesses in the United States, historically, fewer than 15% survive transfer to the third generation, a…

Send us your restaurant memories!

Do memories of certain restaurants transport you back in time?

There’s no denying the COVID-19 pandemic has drastically changed many facets of everyday life. From virtual school and working at home, to avo…

Magalie Yacinthe, owner of So-In Forsyth and interim executive director and board chairwoman of Hustle Winston-Salem, is a leader and advocate…

A post-graduation internship brought Molly Fitzpatrick to Winston-Salem, and her fondness for the city remains even though she’s moved on.

I recently caught up with Virginia Ellis and Jennifer Cameron, the designers at DreamMaker Bath & Kitchen. With a newly remodeled design c…

Gaston County: Mountains in the Piedmont

When the world was put on hold in 2020, the great outdoors became the Great Escape.

Entrepreneur Kira Wood has an eye for business. And beauty.

These plate and spoon molds on display at MESDA were referenced in the minutes of the 1911 annual report of the Wachovia Historical Society in 1911.

This earthenware squirrel jug is thought to have been made by Rudolph Christ when he was master of the pottery at Salem. Squirrels were popular pets, often represented in toys, art work and ceramic articles in the 18th and 19th centuries.