Flash Flood Watch from 5AM EDT SAT until 12AM EDT SUN 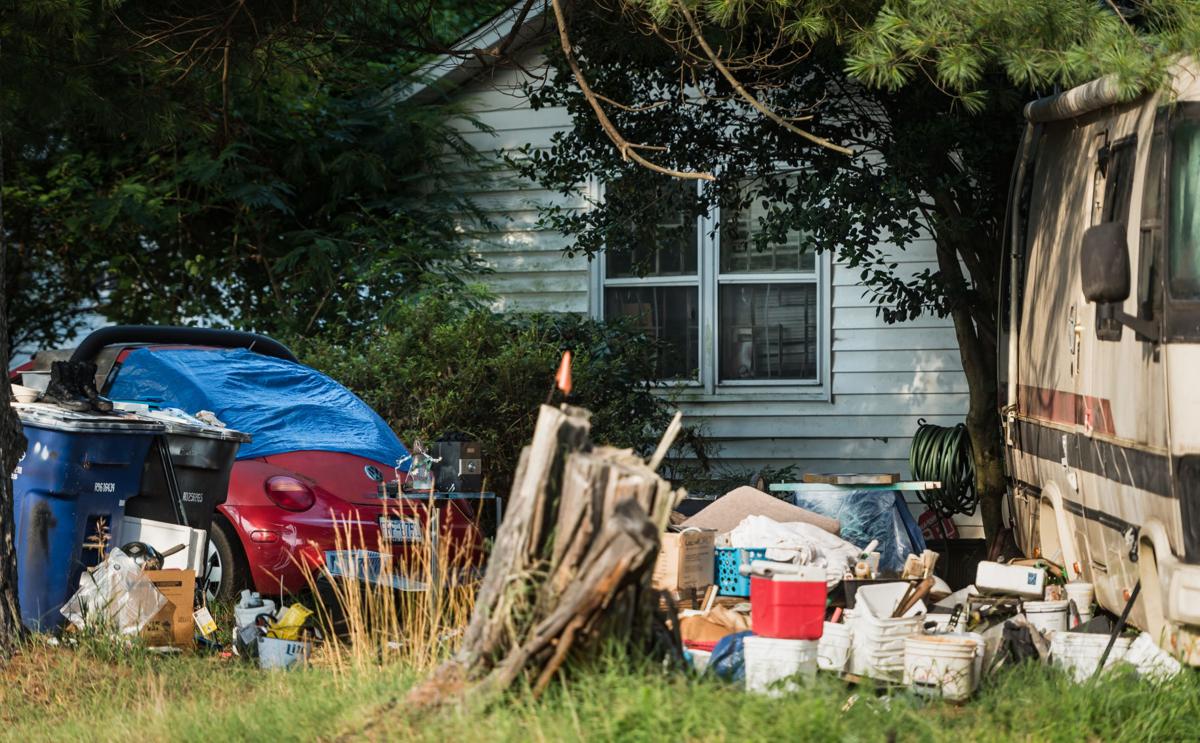 Debris and old cars sit in the yard of a house in the 5300 block of Silas Creek Parkway. Complaints have been filed with the city about the condition of the house. 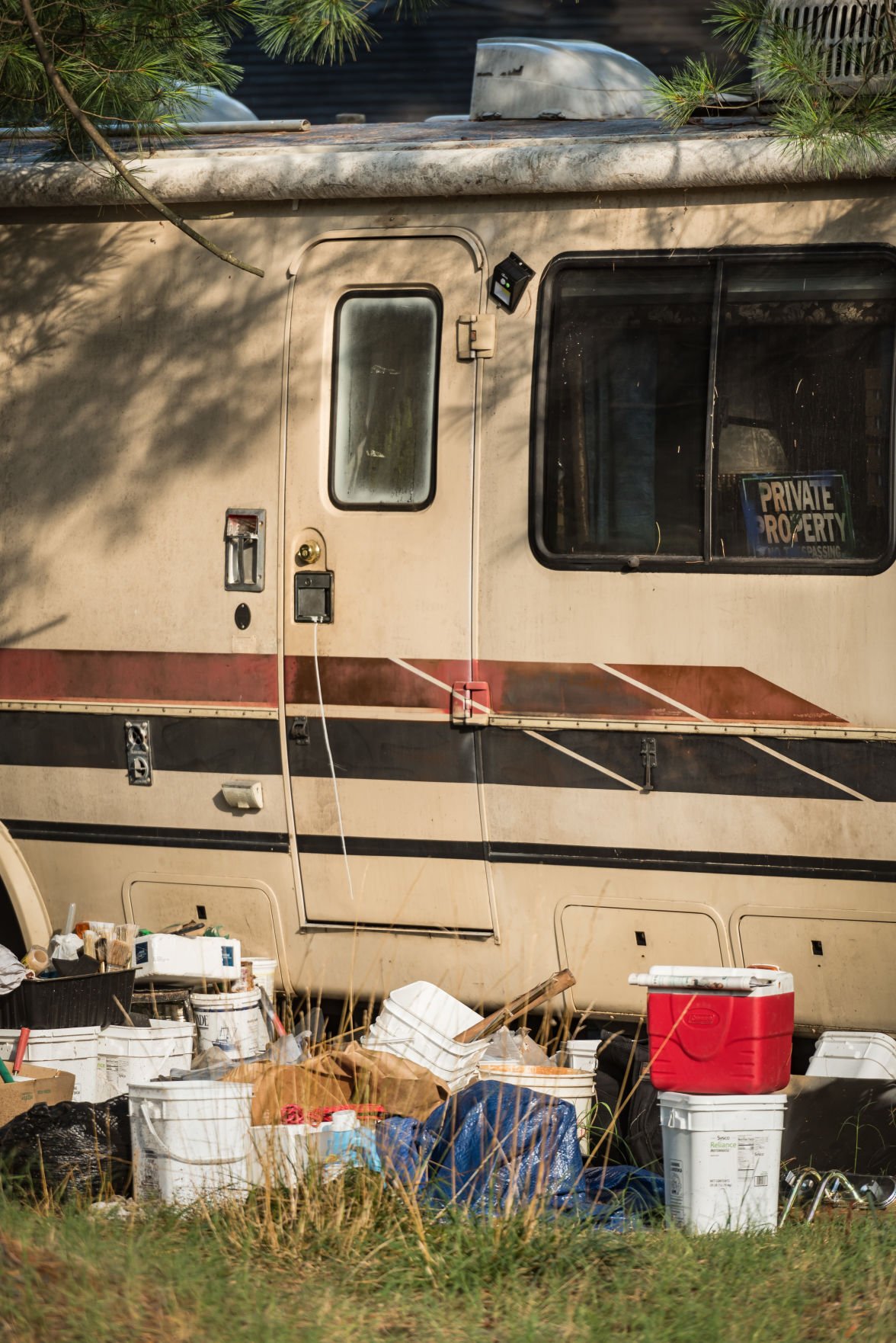 David Gortman, the owner of the house, says he might have to live in his old RV because his house is in foreclosure. 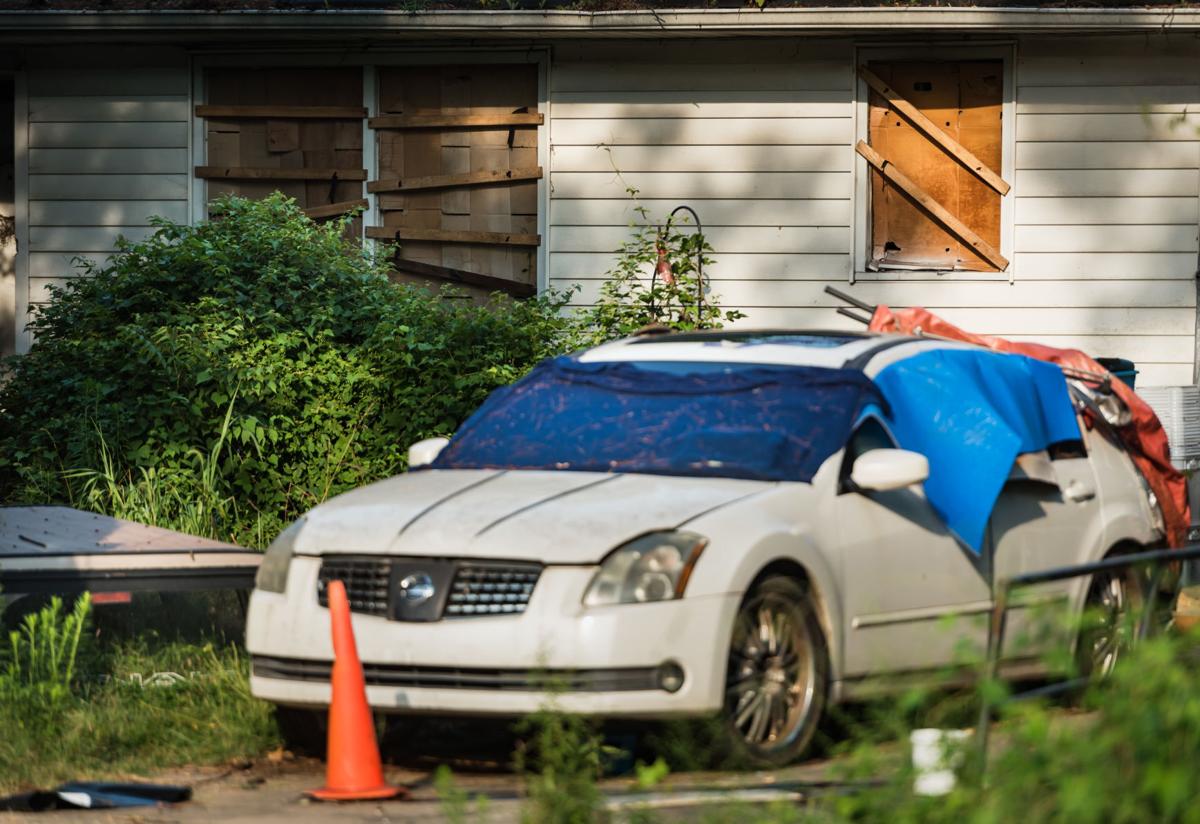 A car sits in front of boarded-up windows at a house in the 5300 block of Silas Creek Parkway. The owner, David Gortman, has had a series of misfortunes over the past 10 years, which he said led to problems at his home. 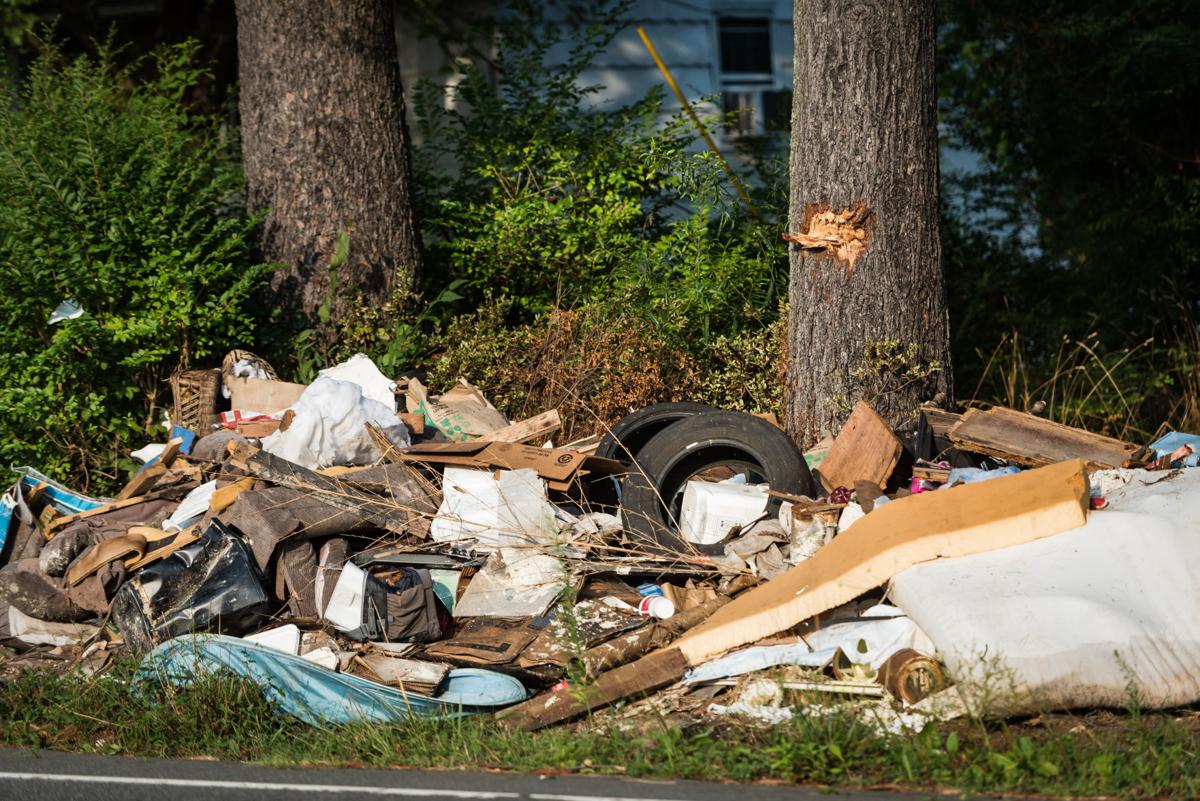 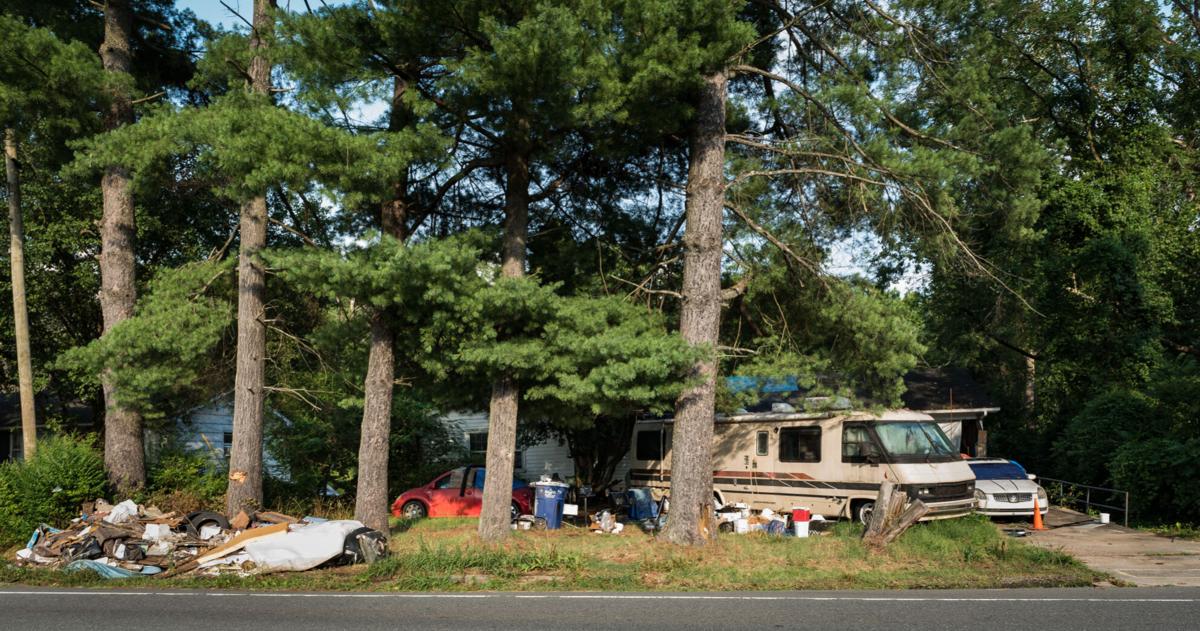 Debris and old cars sit in the yard of a house in the 5300 block of Silas Creek Parkway. Complaints have been filed with the city about the condition of the house.

David Gortman, the owner of the house, says he might have to live in his old RV because his house is in foreclosure.

A car sits in front of boarded-up windows at a house in the 5300 block of Silas Creek Parkway. The owner, David Gortman, has had a series of misfortunes over the past 10 years, which he said led to problems at his home.

David Gortman was hard at work inside the parked RV that takes up a large chunk of his small front yard. The door to the vehicle was open and a variety of hand tools and tool boxes were strewn about the ground.

He was surprised to see a visitor approaching, and slightly wary. And who could blame him; no one who’s been by in the past few months has come bearing good news.

The guest list includes housing inspectors responding to complaints about trash, overgrown grass and cars in the yard; mail carriers bringing bad news about an impending foreclosure; a process server with a summons for a nuisance abatement claim brought by the city and detectives investigating a fire which severely damaged the house and resulted in an arson charge against his estranged wife.

The hits just keep on coming, and yet Gortman managed a weary smile when asked about the complaints, court proceedings and a years-long string of heartache and hassles.

“I appreciate the chance to tell my side,” he said. “People look at the house and they see devastation. They see the tarps and the stuff by the street. I get it. But when I look, I see Easters and Christmases. My kids were raised here. They’re grown and on their own now, thank God.

“The house did its job.”

If you’ve ever been stuck in a slow-moving line of traffic from Robinhood Road waiting to make the drag-strip merge of death onto Silas Creek Parkway, you’ve probably seen Gortman’s house.

Tarps cover holes in the roof that firefighters made to ventilate smoke and flames from a fire investigator say was intentionally set in September by 49-year-old Wendy C. Taylor, Gortman’s estranged wife.

Vegetation has obscured some of the house’s windows, a red VW Beetle that’s seen better days is parked next to the RV and a pile of rubbish sits a few feet from Silas Creek Parkway.

Complaints have been trickling for months into the city’s code enforcement division. Others made it to the Journal from neighbors and passersby annoyed by a seeming lack of progress.

“It’s a low priority in terms of importance with everything else going on in the world. We have higher priorities,” Phil Boutwell, who often drives by the house, said during a quick phone call earlier this week. “But it’s an eyesore. You’d think the city would at least pick up the trash and haul it away.

“What are the ordinances anyway?”

That’s a valid question. Fair, too.

Winston-Salem, like any other decent-sized town with an ounce of self-respect, has on its books an assortment of ordinances meant to strike a balance between public health and minimum appearance standards against property rights.

It’s a delicate act, one that requires time, meticulous documentation and the occasional intervention of the courts.

No city worker relishes telling business owners that their signs are bigger than what’s allowed. No self-respecting ex-contractor signs up to become an inspector dreaming of the day she has to order somebody to cut their grass, haul off a rusted car or repair broken windows and leaking roofs.

There are legitimate reasons for having such ordinances. Trash attracts rodents, and overgrown lots provide cover for snakes that want to eat them. Old tires are breeding grounds for mosquitoes, and crumbling houses are a danger to inhabitants and a drag on nearby property values.

It can take weeks to move from complaint to action. A homeowner with an overgrown yard might get several notices and 30 days’ lead time before city workers mow it and send a bill. Collecting it can require a lien on the property.

In some instances, the city can take legal action to declare a house (or business) a public nuisance, order repairs or in extreme cases, seek to have a building razed.

At this point, the city’s complaints against Gortman are intended to get the lot cleaned up. An affidavit filed in the nuisance case indicates that inspectors filed several notices of violations, including on Sept. 6, Jan. 14 and June 5 for trash, overgrown weeds, housing code violations and abandoned vehicles in the yard.

An order for abatement/motion for injunctive relief for overgrown vegetation was drafted earlier this year by the city attorney’s office. A summons was served Jan. 24 and another notice delivered by certified mail Feb. 3.

A judgment in favor of the city was entered March 18. A hearing is scheduled for next week to address the shrubbery.

“The City will be initiating additional actions with regard to the trash and the motor vehicle storage on the property,” wrote Jerry Kontos, an assistant city attorney in an e-mail. “Further, demolition is also being considered.”

That’s only part of the problem; Gortman is also nearing the end of a lengthy foreclosure.

But what all that legal maneuvering fails to take into account — it’s not designed that way — is the human element, the pain and emotional suffering homeowners endure as the processes drag out.

Gortman said his troubles began 10 years ago when his job at Douglas Battery Manufacturing Inc. ended.

“It was breaking big rocks into little rocks but it was good, honest work,” he said. “We produced things that were used in the war on terror after 9/11 and that was a good feeling.”

Then came the financial crisis of 2008, which froze credit and squeezed businesses. Douglas Battery Manufacturing was sold in 2010 to an out-of-state company, and 90 jobs were eliminated.

Money got tight, and Gortman said he had to spend savings to make ends meet. “It took two or three McDonald’s type jobs to even begin to make up for (the job loss),” he said.

That slow bleed led in 2015 to a place no one ever wants to go: filing for bankruptcy, a Chapter 13, which allows people to stay in their homes if they continue making the mortgage payments with extra added in each month to catch up on arrears.

“He was a really nice man and I wanted to help him,” said Robert Lefkowitz, a Winston-Salem attorney who specializes in bankruptcy. “A lot of people wait too long, to the point where there’s not a lot of options.”

Gortman said his Chapter 13 filing nearly doubled his mortgage payment. He kept up as best he could, but fell behind again.

That led to the Chapter 13 agreement being withdrawn and foreclosure, a prolonged process that’s just winding down. The court file indicates that the latest upset bid for the property — $47,237.86 — was filed this month. The tax value on the home is listed at $138,200.

While all that was playing out in slow motion, Gortman said, stress piled up and exacted a heavy toll on his marriage. “I didn’t want to tell her,” he said. “I kept putting it off.”

Eventually he had to come clean and admit they were in danger of losing the house. He said they’d separated, and in his opinion, she suffered mentally and emotionally.

Police records support the picture of a household under stress. Officers were summoned to the residence at least two dozen times between July 24 and Sept. 9. Most were for unknown disturbances, communicating threats or harassing phone calls. No charges were filed, however.

A tense situation came to a head the night of Sept. 11 when Gortman said he awoke to strange noises. Taylor, he said, had entered the house, called for the dog and then started a fire.

“No sooner than the front door closed then I smelled smoke,” he said.

He ran to his bedroom and started scooping up photos and keepsakes. The fire had grown to “more than my little extinguisher could handle” and he thought for a moment he might be trapped.

He escaped, he said, by jumping through a bedroom window and he cut his back on a jagged piece of glass. The enormity of what had just taken place hit him on his way home after being treated.

Taylor was charged with first-degree arson, and placed in the Forsyth County Jail with bond set at $80,000. “At the time of the burning, David Wayne Gortman was in the dwelling house,” the arrest warrant reads.

Meanwhile, on a parallel track, city inspections (and notices of violations) continued and the nuisance abatement case pressed on.

“That (the fire) was worse. I busted my rear end to get this house. We scrimped and saved.”

As for what happens next or where he’ll go, Gortman just isn’t sure.

He didn’t finish his thought. But he didn’t have to.

There are no good answers, only a series of questions about to be answered by the courts.