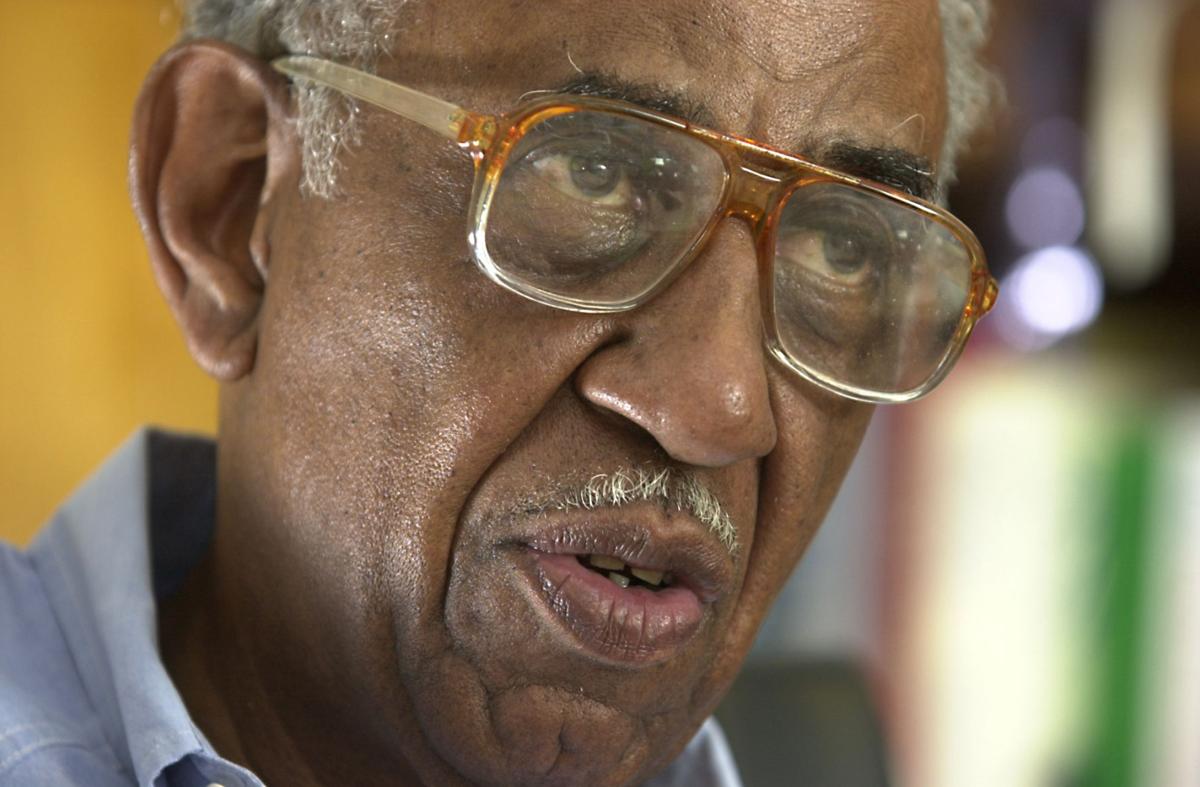 Over 46 years, Dr. Otis Tillman delivered 3,000 babies in High Point during segregation and found out that even being a doctor was no protection against racism in the South. 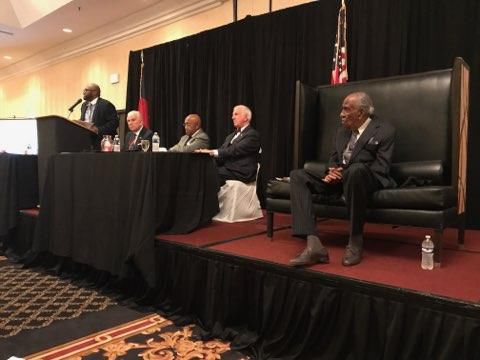 Dr. Otis Tillman receives the key to the city of High Point in 2018, with High Point University President Nido Qubein among the speakers.

HIGH POINT — Late one night in the 1950s, Dr. Otis E. Tillman was asked to make a house call. A woman had been in labor for several hours, attended by women in the community.

Several times, the older women asked the young physician if it was time to “quill her.” Not knowing what that meant, Tillman kept admonishing the pregnant woman to push.

But the child wouldn’t come.

Finally, he acquiesced. The ladies put a small amount of snuff in a goose quill and blew it into the woman’s nostril, causing her to cough and push the baby out.

From then on, “this young doctor swallowed his pride” and would be mindful to give “an ear to those who had been there before.’’

Tillman made that declaration in “A Prescription For The Soul,” a decades-old book he often passed out to new doctors.

He speaks with a wisdom culled from years of experience during an era of medicine that, looking back, seems romantic now. Over 46 years, Tillman delivered 3,000 babies in High Point during segregation and found out that even being a doctor was no protection against racism in the South.

These days, the 89-year-old Tillman is retired and dealing with his own infirmities. He’s been looking back over a storied career as many medical students across the country are finding out where they will perform their residencies. He says these new doctors should remember that a caring attitude, listening to patients and remaining open to learning has taken doctors before them further than their studies alone.

The longtime community leader’s journey into medicine started when he was a boy growing up in rural Wadesboro.

As a tall and lanky 16-year-old, Tillman recalls lifting a woman named Miss Emma, robbed of her legs by diabetes, to a white doctor’s office and the second-floor waiting room for black patients.

When he got to the top step, he placed his frail neighbor in a chair and sat alongside her all day — just as his mother had told him to do. He sat there right up until the doctor had seen his last white patient and came upstairs to tell Miss Emma he was done for the day.

A neighbor had donated the car they used to get there. His mother had volunteered Tillman to take Miss Emma. She waited all day. And it had been for nothing.

But Tillman would turn that frustration into trying to keep other Miss Emmas from having to endure those same societal slights.

The Tillman boys didn’t have a lot of money, but work was something they knew a lot about. As youngsters growing up on a farm in the 1930s, they would get up at 4 a.m., milk the cows, bottle that milk and deliver it before dawn.

Tillman had spent the year after high school working as a barber before following older brother Daniel, a junior at N.C. A&T, to Greensboro in 1949.

Daniel slipped Otis into his dorm room and spent the rest of the semester hiding him from counselors as he worked to get him a part-time job at the Sedgefield Inn waiting tables. Tillman also clipped hair at night, charging 50 cents or whatever students could pay.

When Tillman got into A&T, it was by sheer might. The courses offered at his high school didn’t exactly prepare one for college, but instructors recognized his potential. He knew the Bible from Genesis to Revelation, but didn’t know advanced math, chemistry or physics.

“I had to work and study harder,” Tillman said years ago. “Sometimes I’d have to ask the janitor to slip me into the lab at night to run my experiments.’’

Otis graduated from A&T in 1953 with a degree in organic chemistry and biological science. The state paid for him to attend medical school at Howard University to avoid integrating UNC-Chapel Hill.

Dr. Alvin Blount, the late Greensboro civil rights icon, had been asked to interview Tillman for admission to the medical school, and was so impressed that he not only gave him a recommendation, but provided a required physical examination for free.

“Everything about him, down to his gentlemanly demeanor, said he’d make a wonderful doctor,’’ Blount said in 2003 when Tillman was to receive an honor from A&T. “You just had that feeling about him.’’

One of Tillman’s college friends, the late Dr. Perry Little, then a popular dentist in High Point, loaned him the money to start a practice there. Little helped spread the word about Tillman, but he soon got the kind of publicity that money can’t buy.

One night a man leaving a medical office nearby had a reaction to a penicillin shot. Onlookers thought the man was dead. Tillman ran back into his office, filled a needle with adrenaline and shot it into the man’s heart, saving his life.

The next day, people were lined up outside of Tillman’s office in wheelchairs and on crutches.

The doctor is in

During Tillman’s early career, black physicians of the era were fewer in number and most were family doctors in the truest sense of the word.

Tillman, who kept a photo of his Howard University medical school class of 1957 on his office wall in High Point, was almost always on duty.

He is known for successfully delivering black conjoined twins in 1965 and keeping them alive when one went into respiratory failure right after birth. The girls, joined at the pelvic area, were taken to N.C. Memorial Hospital in Chapel Hill six hours later to be separated. Though the surgery was successful, one would die at age 2.

When McAllister was in high school, she sometimes helped out in the office. What she found often astounded her.

“I said, ‘Daddy, you delivered these five babies and you didn’t get a dime!’” said McAllister, a diversity trainer. “He’d say, ‘That’s all right. I’m not worried about that.’ ”

Others would show up at the back door of the office and say, ‘Doc, I don’t have the money, but I brought you this,’ and it would be vegetables right out of the garden or a freshly baked pie,” McAllister recalled. “My dad would just say, ‘Thank you. I appreciate it.’’’

Her father saw his work as a calling, not just a profession. During house calls, he would often sit down and pray with a patient before he left.

It was an era when black doctors also carried the burden of segregation.

At one drive-in restaurant in High Point, it didn’t matter that Tillman carried the credentials of a doctor. He recalls a time when he ordered hot dogs with his very pregnant wife and excited children in the back seat, but was refused service.

McAllister remembers her father refusing to leave and was taken away by police.

The sting of racism sometimes caught him off-guard.

Once when visiting Philadelphia, the avid golfer took the opportunity to see pro Ben Hogan play a round at a nearby country club. While he was there, a white caddie began having seizures.

Tillman ran to his side, told him he was a doctor and tried to help. To his surprise, the man recoiled and yelled, “I don’t care what you are! I don’t want any n to lay a hand on me!’’

One of the white golf pros came over and apologized, even offering him a set of clubs.

“His offer,” Tillman admitted, “could not heal the emotional wound inflicted on my spirit.’’

Back home, he was often forced to work within the confines of Jim Crow laws.

Tillman and other black doctors, for example, could only get a “scientific membership’’ to the various medical associations, including the Greensboro Medical Society and the Old North State Medical Society, where participation was required for physicians.

At the time, High Point Regional Hospital, like most hospitals in the South, was segregated. Black babies had to be delivered by black doctors while black patients were confined to a single ward.

“You might have a person with pneumonia, someone post-surgery and someone who just had a baby all on the same floor,’’ Tillman said.

Black doctors had to learn to do most everything.

In the years after integration, Dr. Donald Douglass, who is white, recalled one night he was on duty with Tillman in the emergency room at High Point Regional.

“I offered to take care of a patient who was involved in a pretty bad wreck. (Tillman) said, ‘That’s OK, I’ll handle it,’ ’’ Douglass recounted a few years ago. “I turned to the nurse and asked, ‘Is he really a surgeon?’ ”

The nurse replied: “Last week, he was a urologist. The week before he was an orthopedist. And he’s been a gynecologist. Now, he’s a general surgeon. He claims to be all those things — I don’t know.’ ’’

“Yes, he was all those things, and all his patients — black or white — came to love him,’’ Douglass said.

As an activist and healer, Tillman was guided by faith — which permeates his books and beliefs that doctors do well to believe in something greater than themselves.

“I think Otis, in his other life, wanted to be a preacher,’’ the late Rev. Howard Chubbs of Greensboro, a longtime friend, once said.

His interest was in making his city, and perhaps the world, better for everyone.

Tillman is considered the father of High Point’s Model City Program, was the former chairman of the High Point Urban Renewal Commission and a board member of the High Point Community Foundation. He served on the board of trustees of A&T for a record 25 years, including one as chairman.

Through the years, he jotted down prayers on napkins, in books and on scraps of paper.

They became the book that he began giving to medical students at Wake Forest.

The late Maya Angelou had read Tillman’s first book, “A Physician’s Prayers & Meditations,’’ and wrote the foreword for the second one.

He had been prompted to write his first book when a young soldier from High Point visited him after returning home from service in Saudi Arabia and showed him the worn newspaper clipping of an inspirational message Tillman had sent him.

While his stories remain inspiring, he knows the journey ahead for those young doctors.

“They will soon have their own stories,” Tillman said.

Over 46 years, Dr. Otis Tillman delivered 3,000 babies in High Point during segregation and found out that even being a doctor was no protection against racism in the South.

Dr. Otis Tillman receives the key to the city of High Point in 2018, with High Point University President Nido Qubein among the speakers.